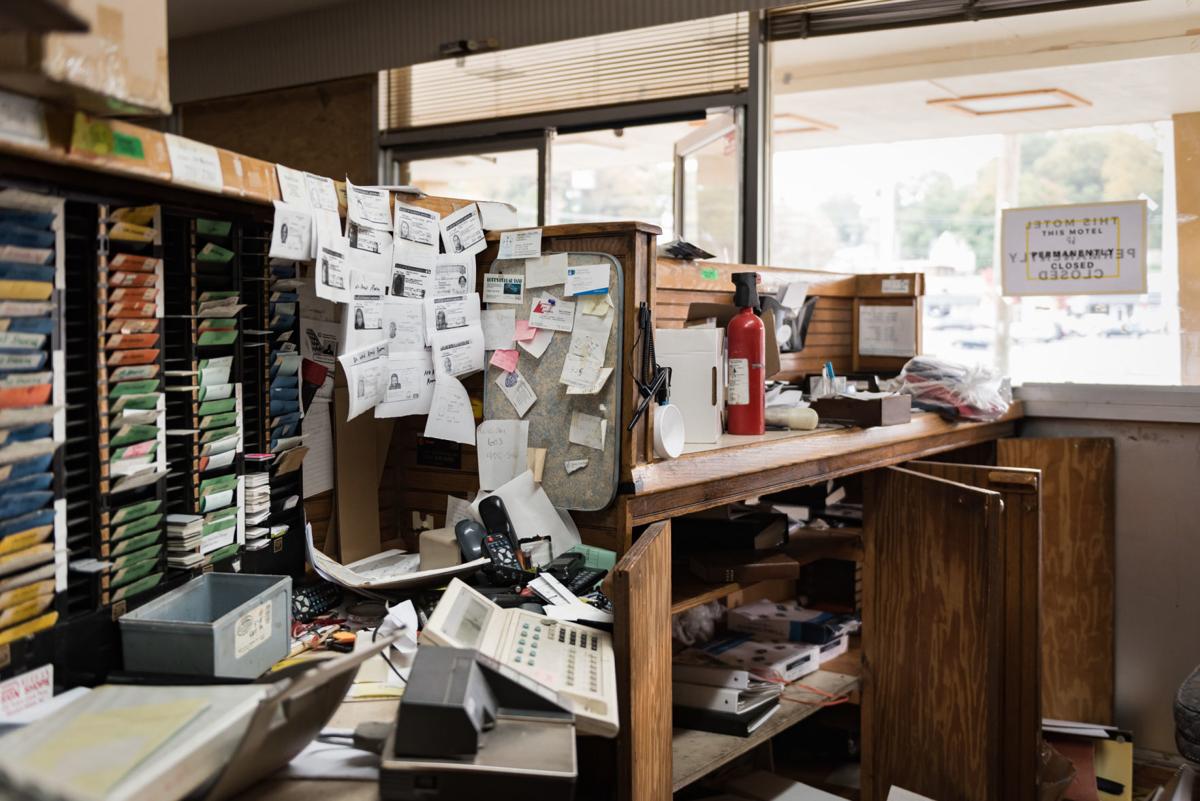 The view from behind the front counter in the lobby of the Budget Inn on Tuesday, Oct. 29, 2019, at the corner of Peters Creek Parkway and Academy Street in Winston-Salem, N.C. The building is in the process of being prepped for demolition. 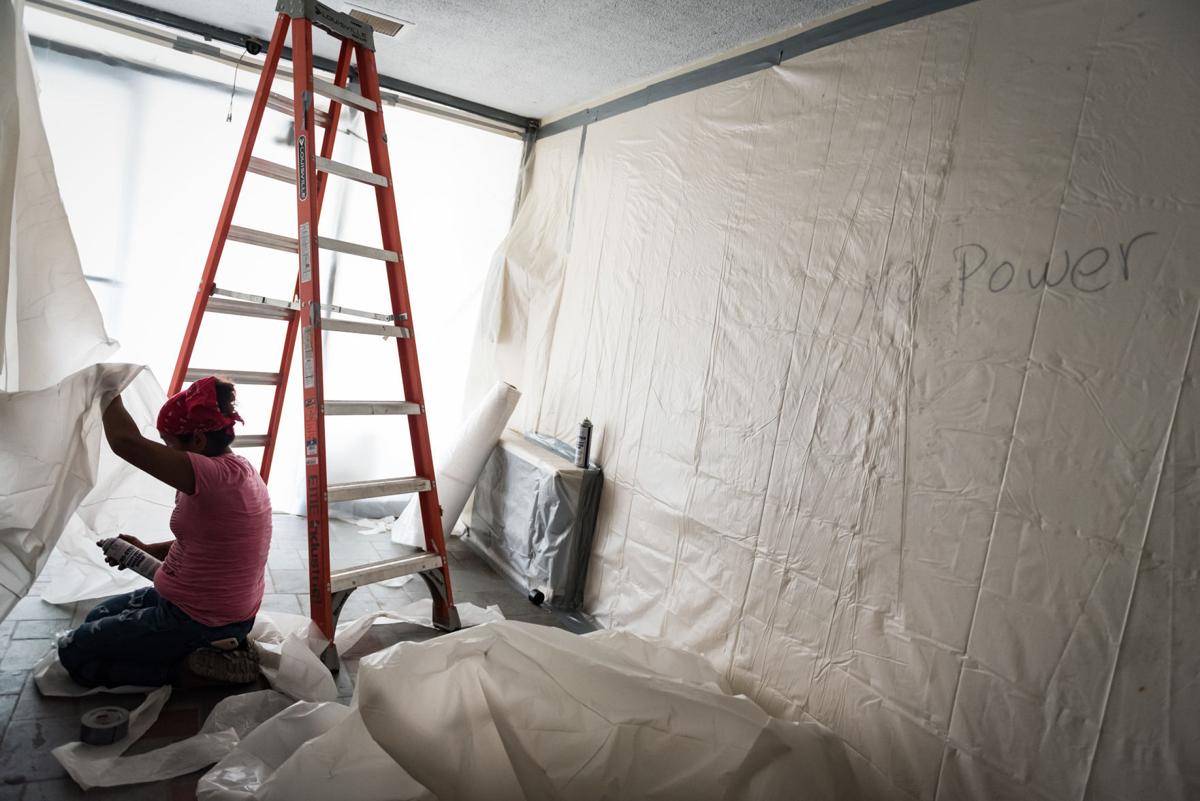 Zoe Mejia works to seal off a portion of the Budget Inn in preparation for its demolition, Tuesday, Oct. 29, 2019, at the corner of Peters Creek Parkway and Academy Street in Winston-Salem, N.C. The building is being sealed off because the textured ceilings of the building have asbestos.

The former Budget Inn is being prepped for demolition, and folks who know the property say it’s not a minute too soon.

Photos: Getting The Budget Inn ready for demolition

What’s more, some in the city are excited about the transformation planned for the property, a change that will put affordable housing apartments on the spot where the motel now stands.

That change, plus new investment at West Salem Shopping Center across the street on Peters Creek Parkway, have some people looking forward to a more general improvement in that section of town.

“That property has depressed the recovery of the whole area,” said Dan Besse, a member of the Winston-Salem City Council who represents the part of town, Southwest Ward, where the Budget Inn property is located. “It will be a big advantage simply to have it gone. It is a prime spot for the development of workforce housing, which we so desperately need.”

The Peters Creek Community Initiative bought the Budget Inn site from its previous owners in May for $1.2 million, using funds supplied in equal shares from the city and Forsyth County. The hotel was shut down, and workers are removing asbestos ceilings inside in preparation for demolition that will go forward in stages and wind up in the early part of next year.

In a previous life, the hotel was a Knights Inn. Under the Budget Inn name the site gained a reputation for trouble: A prostitution ring was busted there in 2000, though the management was unaware of what had been going on.

In 2007, a local rap artist named Latravis Green was shot in the thigh by robbers and wandered around the hotel looking for help before he collapsed in front of the office. Green died at Wake Forest Baptist Medical Center.

Then, in 2016, the Shalom Project got $15,000 from the city to study redevelopment options for the property. Specifically, the group was interested in creating housing that would be affordable to average working people, in what was called the Peters Creek Community Initiative.

Eileen Ayuso, the executive director of the Shalom Project, said that money is either in hand or anticipated to complete the demolition of the Budget Inn buildings.

Work is proceeding in phases, starting on the part of the former hotel on the rear of the property, where asbestos is being removed.

“They will remediate one building at a time and demolish it,” Ayuso said. “The vision is to build 72 affordable housing units. They would be rented based on average median income, with no one paying more than 35% of their income for the space.”

The new apartment building would rise in the center of the property. There will be a slight amount of grading needed on the property, Ayuso said. Most of the new apartments would be one- and two-bedroom units, for which the greatest need is felt.

“We believe a mixed-income community is the most healthy community,” Ayuso said, noting that while downtown has a lot of jobs, it doesn’t have a lot of reasonably-priced housing.

“We want people who work downtown to be able to live close to where they work,” she said.

It will take some $10 million to build the kind of apartment building the Shalom Project has in mind. Ayuso said the money will likely come from a variety of sources, including government and private sources.

Ayuso said that while the project has not yet gotten a grant from the N.C. Housing Finance Agency, it will continue pursuing that and other funding sources. That includes asking the city for more support as well, from among the city’s annual support to community organizations.

When hotel property was bought, the Shalom Project worked with a local nonprofit called City with Dwellings to help people who were living in the hotel find new homes.

“We probably had about 30 people who came to our meetings,” she said. “For a month or longer we worked with City with Dwellings to rehouse the people who were long-term occupants of the Budget Inn. We helped with down payments and electric bills and things like that. Some of them needed a helping hand to get out of their situation. Some people had other family.”

The Peters Creek initiative is only one of the Shalom Project’s efforts, which also include a food pantry, clothing closet and medical clinic.

Meanwhile, Winston-Salem recently approved some $700,000 for improvements at West Salem Shopping Center directly across the road from the hotel site. Efforts are under way to bring a co-op grocery to the property.

Council Member John Larson, whose South Ward includes the West Salem Shopping Center property, noted that the shopping center and housing projects together can be a catalyst for redevelopment that extends throughout the northern end of Peters Creek Parkway.

“I’m optimistic that we are on an upward swing,” Larson said. “It is a corridor leading into the city that is in need of attention.”

The view from behind the front counter in the lobby of the Budget Inn on Tuesday, Oct. 29, 2019, at the corner of Peters Creek Parkway and Academy Street in Winston-Salem, N.C. The building is in the process of being prepped for demolition.

Zoe Mejia works to seal off a portion of the Budget Inn in preparation for its demolition, Tuesday, Oct. 29, 2019, at the corner of Peters Creek Parkway and Academy Street in Winston-Salem, N.C. The building is being sealed off because the textured ceilings of the building have asbestos.