On a cold day in January, halfway into the service at Congregation Beth Israel in Colleyville, Texas, Rabbi Charlie Cytron-Walker heard a click.

“I heard the click of the gun, but I was hoping it was something else,” said Cytron-Walker, who became the new rabbi at Temple Emanuel in Winston-Salem on July 1.

The rabbi, who had been facing East in prayer in the direction of Jerusalem, turned around to look at the man sitting in the back of the sanctuary, but didn’t see anything unusual.

The man had entered Congregation Beth Israel earlier in the day asking for a cup of tea.

“He looked like somebody who was homeless,” Cytron-Walker said.

Because of the noise he heard while praying, the rabbi was sure the man had a gun and went to talk to him.

“I was very tense at that point in time,” Cytron-Walker said.

He told the man he was welcome to stay, but if he just wanted to warm up after getting his tea, he didn’t have to stay for the full service.

“That’s when he pulled the gun on me,” Cytron-Walker said.

What followed was an 11-hour hostage situation that ended in Cytron-Walker being hailed as a hero.

Three other people were held hostage along with the rabbi in the synagogue.

Initially, the gunman told them that he had bombs, but he didn’t.

The gunman demanded to talk to someone at 911. He said he want to clear out the houses around the synagogue.

“He didn’t want innocent people to get killed,” Cytron-Walker said.

Congregants watching the service on Facebook Live called the police.

“We had members who overheard him yelling,” Cytron-Walker said.

The rabbi said the man, who was from England, also wanted to talk to a prominent rabbi and get a prisoner released from a federal prison in Texas.

Cytron-Walker said he and the other congregants had plenty of time for conversation with the man and to hear all about his views.

“He had come over from England with this in mind,” Cytron-Walker said. “He was going to take hostages at a Jewish institution. It was not random.”

He said the man thought that Jews controlled the world — the government, banks, the media.

“He believed with all his heart that if he walked into a synagogue and he could get an influential rabbi on the phone, she would be able to snap her fingers and give him what he wanted because (he believed that) Jews controlled everything,” Cytron-Walker said. “And that’s what he did.”

The rabbi feared for his life.

“I thought that we were going to die because he wasn’t getting what he wanted,” Cytron-Walker said.

The rabbi said there were a lot of conversations with law enforcement during the hostage situation.

“I was literally texting with the chief of police in Colleyville while all of this was happening,” Cytron-Walker said.

The rabbi said the gunman released one of the hostages.

“There were two guys with me who were still there,” he said.

Then the moment came.

Cytron-Walker noticed that the gunman had taken his finger off the trigger.

He threw a chair at the gunman and yelled for the other two men to run.

“That was enough of a distraction that we were able to get out of the building,” he said.

He later found out that just as he was throwing the chair, the FBI was getting ready to come into the building.

“They came in less than 30 seconds after we escaped,” he said.

Authorities identified the hostage-taker as British national Malik Faisal Akram, 44, who was fatally shot by the FBI after the last three hostages ran out of the synagogue.

Cytron-Walker credits more than half a dozen trainings on such topics as security, emergency action plans and how to deal with an active shooter that he and members of the congregation had received over six years for helping him and the other men get free of their captor.

Originally from Lansing, Mich., Cytron-Walker did a lot of community service prior to going to rabbinical school. He has a history of working to bring a sense of spirituality, compassion and learning into communities.

According to his biography on the Temple Emanuel website, he developed positive relationships with local school districts and helped organize interfaith gatherings, including vigils, walks and relationship-building events.

Cytron-Walker is past president of the Southwest Association of Reform Rabbis, a regional nonprofit, and served on the steering committee of Peace Together in Tarrant County, Texas. In 2022, he was honored as a Hero Against Hate by the Texoma Anti-Defamation League, based in Dallas, Texas.

He has testified before the U.S. House of Representatives Judiciary and Homeland Security Committees, has been published in news sources including the New York Times and the Wall Street Journal, and has been interviewed and/or profiled for various TV networks.

He received a degree in social sciences from the University of Michigan in 1998. After graduating, he worked at Focus: HOPE, a civil and human rights organization in Detroit, Mich., and then became the assistant director of the Amherst Survival Center, which housed a food pantry, free store, and soup kitchen in North Amherst, Mass.

Cytron-Walker attended Hebrew Union College-Jewish Institute of Religion at its Jerusalem and Cincinnati campuses. He received his rabbinical ordination in 2006 and master’s in Hebrew Letters in 2005.

As a student, he served congregations in Ishpeming, Mich., Fort Walton Beach, Fla., and Cincinnati, Ohio. During his time at HUC-JIR, he received multiple awards for his service to the community, along with an award for leadership from QESHET: A Network of LGBT Reform Rabbis.

He is married to Adena Cytron-Walker. The couple has two children.

Cytron-Walker, 46, said he and Congregation Beth Israel decided after discussions to part ways at the end of October 2021.

A search committee at Temple Emanuel did an extensive search process for the synagogue’s next rabbi, initially interviewing candidates virtually on Zoom then inviting those they were most interested in for in-person visits.

“We also held focus groups so that every member of our congregation had an opportunity to provide input on what was important to them in a rabbi,” said Hilary Kosloske, past president of the board of governors for Temple Emanuel.

Cytron-Walker was scheduled for his in-person interview in January about a week after the hostage situation, but it was delayed until February based on what he had gone through.

He was also dealing with the fact that everybody knew who he was all of a sudden.

“I came in and people had heard of me… and there was all the media because I had done a lot of media after the event,” he said. “It was a very weird experience trying to interview for a job when everything had just happened.”

Bill Reingold, president of the board of governors of Temple Emanuel, led the rabbinic search committee.

“The search committee voted unanimously to try to make him the next rabbi at Temple Emanual,” Reingold said of the committee’s decision after Cytron-Walker and his family visited Winston-Salem and interviewed in-person.

During interviews, committee members found the rabbi to be a warm and genuine person, Reingold said.

“He turned out to be exactly as he came across in our interviews, both over Zoom and in person,” Reingold said. “He is very big on building relationships with members of the congregation. He has worked very hard over the first few months to meet many people. It’s been very successful.”

He also said that the rabbi came in with a good attitude.

“By that I mean, he has not tried to walk in the door saying, ‘This is the way it’s going to be from this point forward,’” he said. “It was very important for him to determine what was very important to us as our congregation’s rituals and then take those and begin to build on those with certain ideas that he has. There has been a real healthy process of Rabbi Charlie getting to learn about us and us getting to learn about him…”

Reingold added that Cytron-Walker has already become an integral part of the community in a short period of time.

Kosloske said Cytron-Walker is genuine in the way he takes an interest in people and is knowledgeable in terms of Judaism.

“He shares the socially conscious priorities that our congregation has in terms of protecting the environment, for example,” Kosloske said. “He is friendly, likeable and prepared. He speaks well. He holds your attention. And what came across to me is that he is passionate about his role as a rabbi. I believe he does it because he loves it.”

As Cytron-Walker settles into his new life in Winston-Salem, he is learning about the area and meeting people.

“I’m trying to get to know my congregation,” he said. “That is my goal.”

One of the things he wants to do is help make people in the community aware of the fact that antisemitism is on the rise.

According to the annual “Audit of Antisemitic Incidents” report released in April 2022 by the Anti-Defamation League, there were 2,717 antisemitic incidents across the U.S. in 2021.

“This represents a 34 percent increase from the 2,026 incidents recorded in 2020 and is the highest number on record since ADL began tracking antisemitic incidents in 1979,” the ADL said.

“The incident that happened to me was an antisemitic incident and it was an incident where, unfortunately, the Jews have had to deal with more hate and more antisemitism over the past two years,” Cytron-Walker said.

He said the FBI was quick to call the hostage situation an antisemitic attack.

“The guy specifically chose the synagogue,” he said. “He didn’t just pick anywhere. He chose a synagogue.”

He said other people believe what the gunman believed about Jews controlling everything.

“Unfortunately, you’ve got far too many people that spout out stuff like this,” Cytron-Walker said. 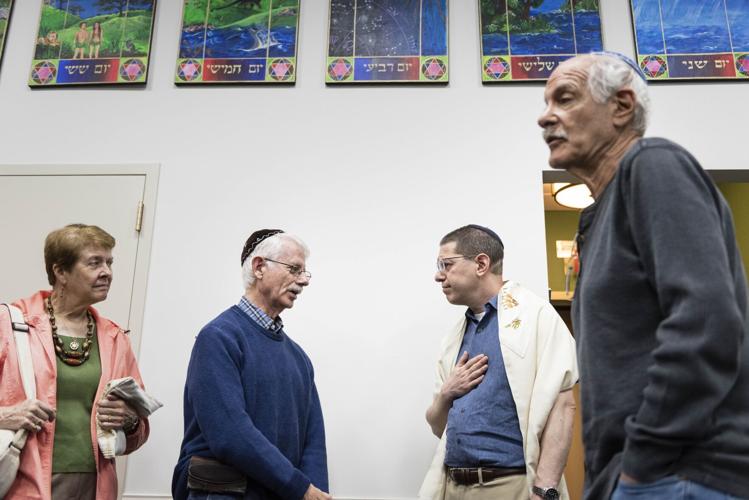 Donna (from left) and Lyle Jaffe speak with Rabbi Charlie Cytron-Walker a after a shabbat, or service, earlier this month at Temple Emanuel in Winston-Salem. Steve Mizel, foreground, talks with another member of the temple. 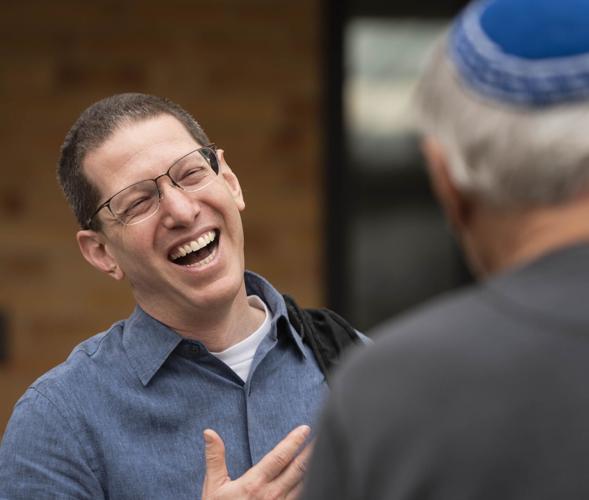 Rabbi Charlie Cytron-Walker (left) shares a laugh with Steve Mizel after leading a shabbat, or Jewish service, on Saturday, Nov. 12 at Temple Emanuel in Winston-Salem. 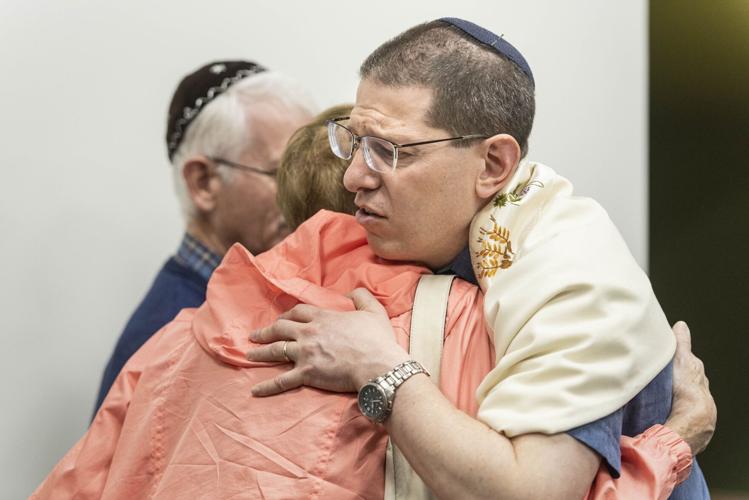 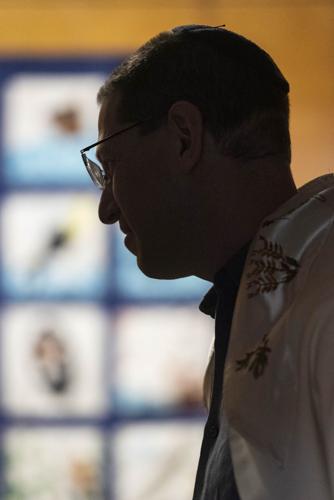 Rabbi Charlie Cytron-Walker speaks with congregants in the hallway after leading a shabbat at Temple Emanuel in Winston-Salem. 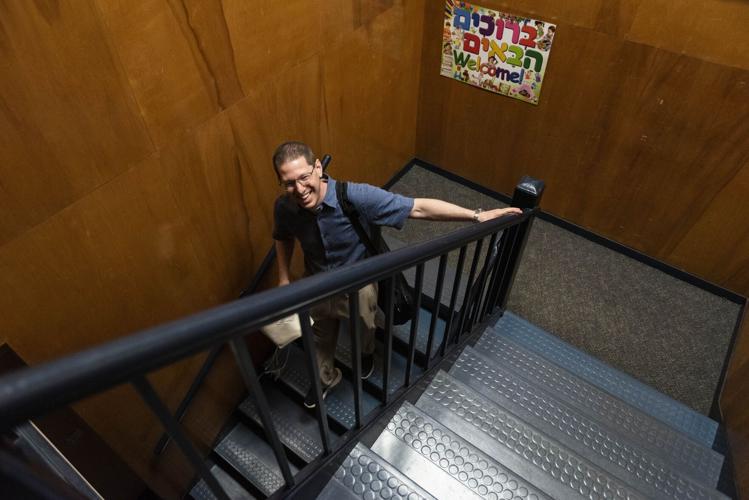 Rabbi Charlie Cytron-Walker encourages congregants to continue their conversation outside in the nice weather as he walks downstairs after a shabbat.