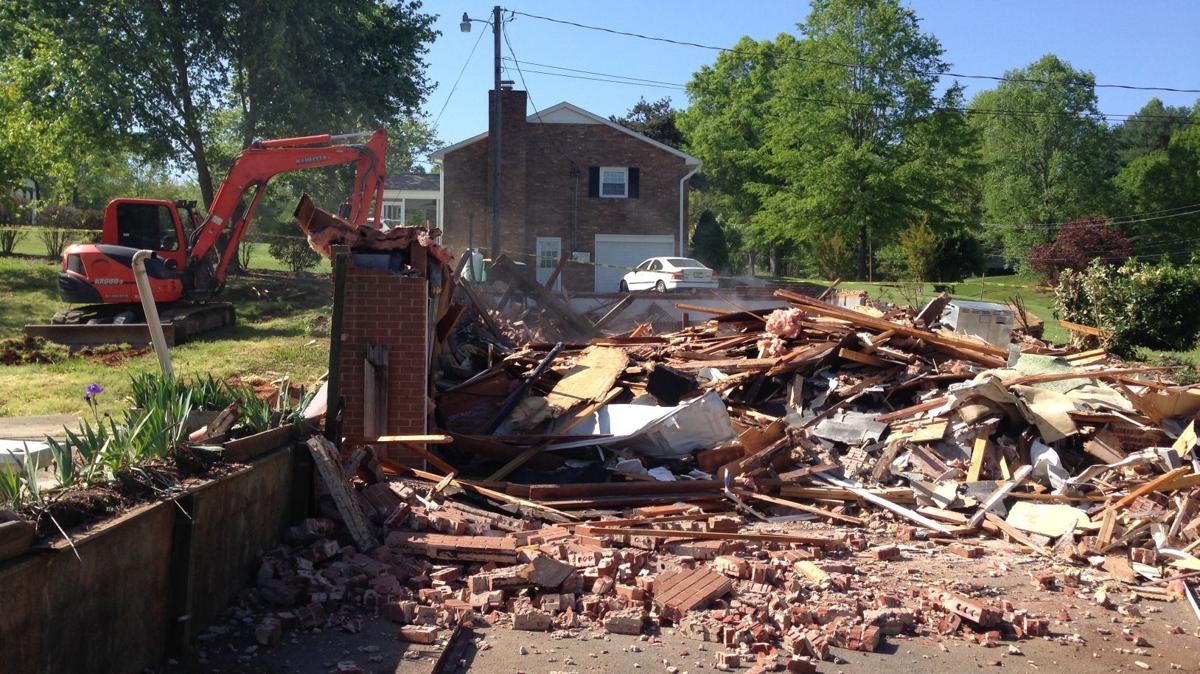 The Clemmons house of Algarad Pazuzu was leveled by a demolition crew Friday morning. 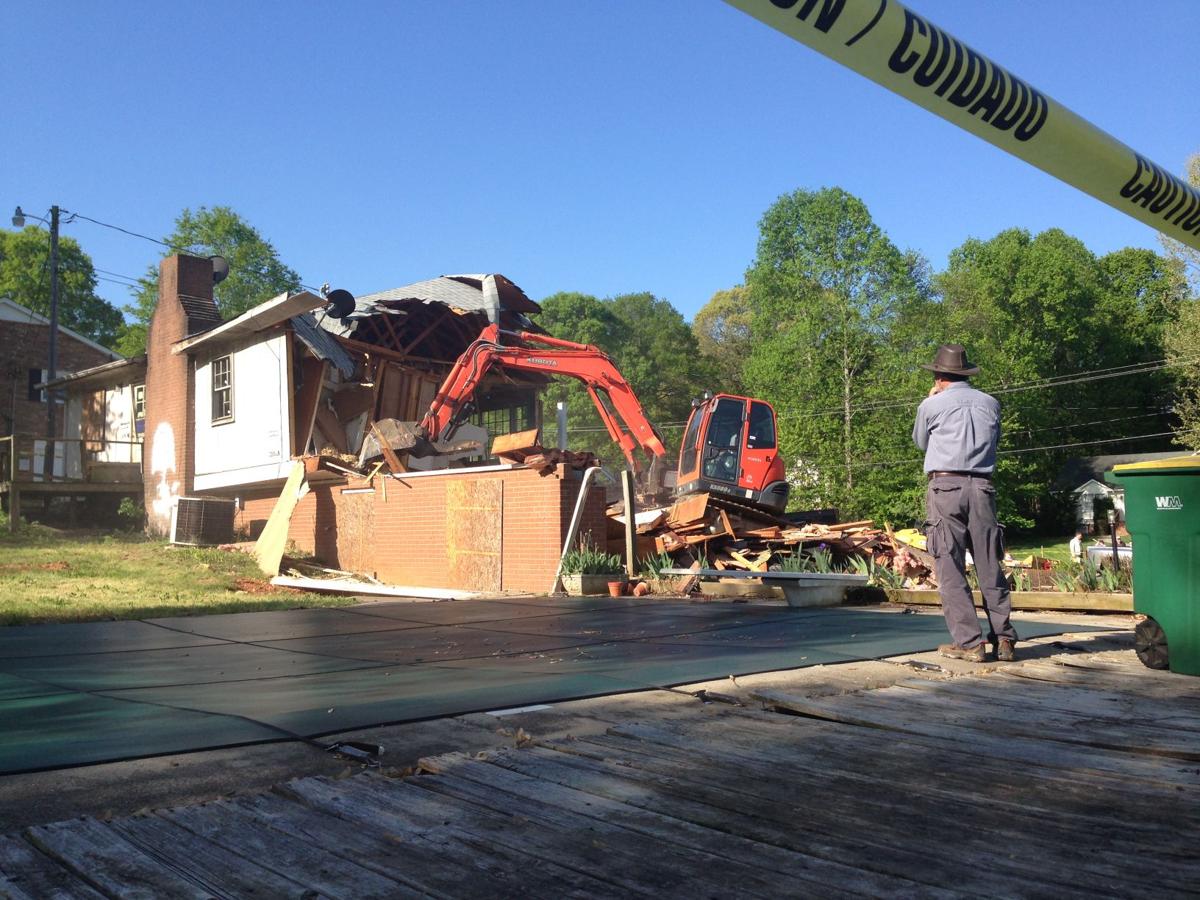 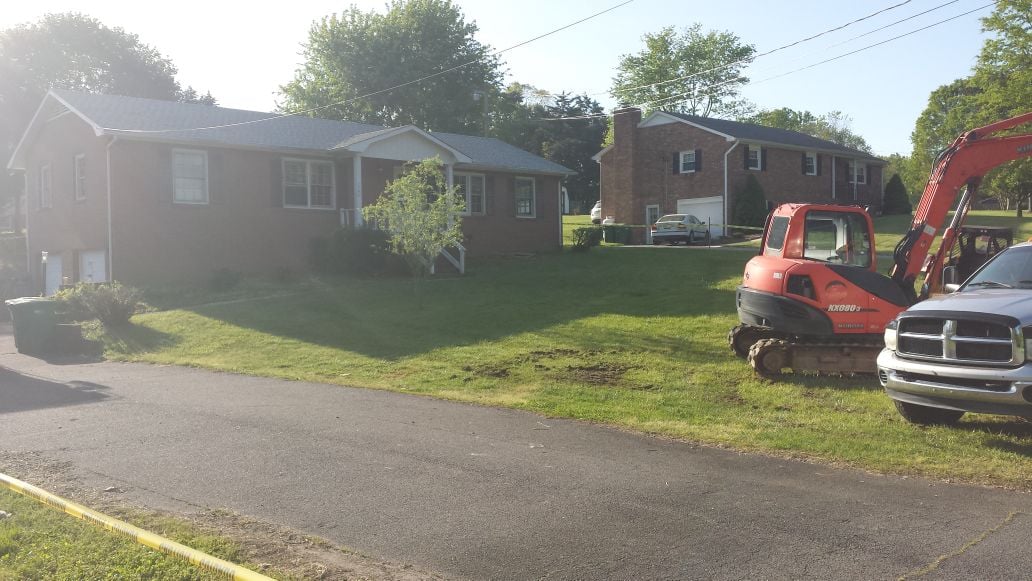 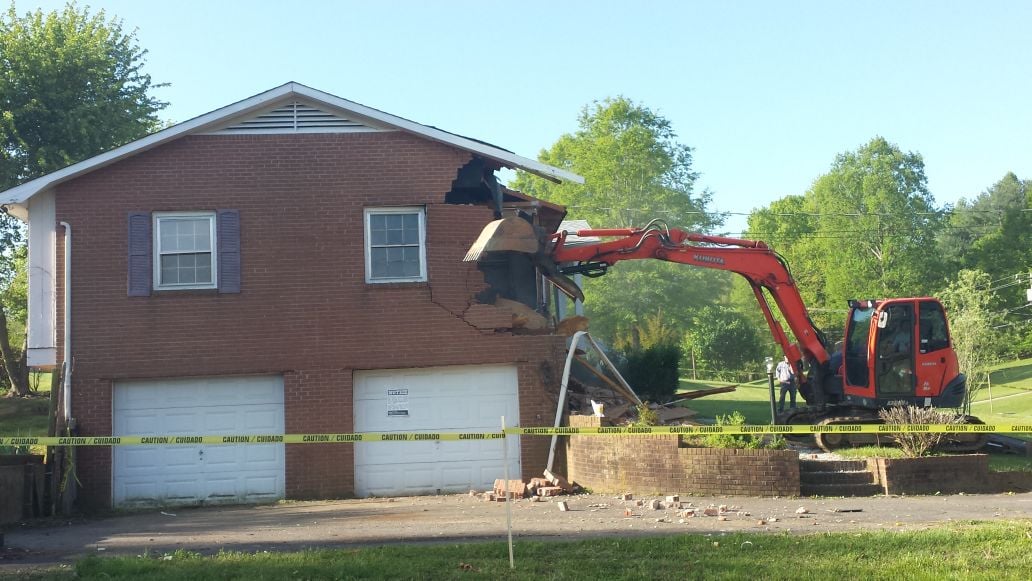 CLEMMONS — Cheers and prayers were raised by neighbors today for the demolition of the foreclosed former residence of accused killer Pazuzu Algarad.

Mobile users can watch video of the demolition here.

An orange Kubota excavator was the equipment of choice for tearing down the brick ranch house with a two-car garage at 2749 Knob Hill Drive, where the skeletal remains of two men were found in the backyard in October.

It took a little more than an hour for the excavator’s claw to knock down the roof and walls, some of which were covered with satanic sketchings, symbols and pornography. The work crew had cleared the property of remaining possessions and debris by Thursday afternoon.

With each early blow from the claw, Lauren Hurst, who lives across the street, alternated yelling “woo-hoo” and “knock it down” from her folding chair in her front yard.

“You can just see the evil floating out,” Hurst said, who has lived in the neighborhood for 20 years. “It will be such a relief to be able to look out my front window and see it gone. I haven’t been able to enjoy that view for many, many years.”

In October, the county housing department declared the house unfit for human habitation.

After gaining possession of the home through foreclosure April 7, Wells Fargo Bank obtained permits to begin demolition, which is being handled by Charles Harris Construction Co. of North Wilkesboro.

Harris said his instruction is to level the lot and put in grass seed, straw and fertilizer. He said that clearing the debris could last into next week, while the landscaping may take until Wednesday.

“Once demolition is completed, we will convey the land back to (federal Housing and Urban Development), which will determine what happens with it after that,” Wells Fargo spokeswoman Emily Bauman said today.

Residents up and down Knob Hill Drive came out to see the home demolished, along with a stream of motorists driving by for a glimpse.

The neighbors are eager for things to return to normal after their lives were disrupted by the law-enforcement investigation into activities inside and outside the house formerly owned by Algarad's mother, Cynthia James.

“I hate to have someone lose their home over something like this,” said Linda Culler, who lives about 30 yards north of the house and has been in the neighborhood 49 years. “But I am glad it's gone.”

Three people have been charged in connection with the deaths of the two men found Oct. 5 in shallow graves in the backyard.

The skeletal remains were identified as those of Joshua Wetzler and Tommy Dean Welch. Both disappeared in 2009. Preliminary autopsy results indicate they had been shot to death.

For those neighbors willing to talk about the house — some expressed concern about followers of Algarad — their stories had a common theme of knowing for years that something wrong was going on behind the wood fence and inside the residence.

For years, there were whispers of satanic rituals, animal sacrifices and drug activity, but nothing the neighbors could document.

According to court documents, Algarad performed satanic rituals and animal sacrifices at the house, and a video shot by a code-enforcement officer with the Forsyth County Housing and Development Department showed pentagrams and other satanic messages scrawled on the walls.

Neighbors said that in 2009 Algarad burned tires in the backyard, becoming enough of a nuisance that they called fire department officials to investigate. They wonder now if the burning was to offset the smell of the buried bodies to neighbors and to Algarad’s dogs.

Forsyth County District Attorney Jim O’Neill said Wednesday that no decision has been made on when prosecutors will seek an indictment in the case. “The case is on hold at this point,” O’Neill said in a text message.

O’Neill said the April 30 hearing in Forsyth District Court for the three defendants will likely be continued to another date. Forsyth prosecutors have not said whether they will pursue the death penalty.

What to do with lot

Hurst said she preached to her sons to never go across the street, particularly if they were invited in.

“You can’t understand the worry about your kids getting sucked into the evil going on there,” Hurst said. “Clearly there were youth who were attracted to what was going on given the parties held there.

“Thank God my boys listened to me all those years. When the news came out about the bodies, they even told me they were glad they listened.”

Culler said she has been asked by neighbors and friends why she didn't say anything to them about Algarad and the house.

“They let the grass and the vegetation grow up so much that, along with the fence, you couldn't see much of anything in the backyard,” Culler said.

“Once in a while, though, you could see the guy flopping around the pool, sometimes naked.”

Neighbors were aware that Algarad had been connected to a shooting death a few years ago. He was on probation for a 2012 conviction of accessory after the fact in connection with the shooting death of Joseph Emmrick Chandler. Nicholas Pasquale Rizzi of Lewisville was convicted of involuntary manslaughter in that case.

Keith Bryson, who also lives across the street from the house, said he had to call the police a few times when things got out of hand with parties. Bryson has come to serve as the neighborhood’s de facto media spokesman the past seven months.

Although Bryson said Wednesday he was willing to help the work crew by bringing in a sledgehammer, he said today he was content to let someone else take down the residence.

When asked what they would like to see happen with the lot, some neighbors said it would be appropriate to put in a small park or a prayer garden to be named for the two victims.

Others suggested a Habitat for Humanity home, if there was confidence that someone would want to live on land that once held two buried bodies.

“I’d like to see a healing place to complete the bringing back of peace,” Hurst said.

The Clemmons house of Algarad Pazuzu was leveled by a demolition crew Friday morning.