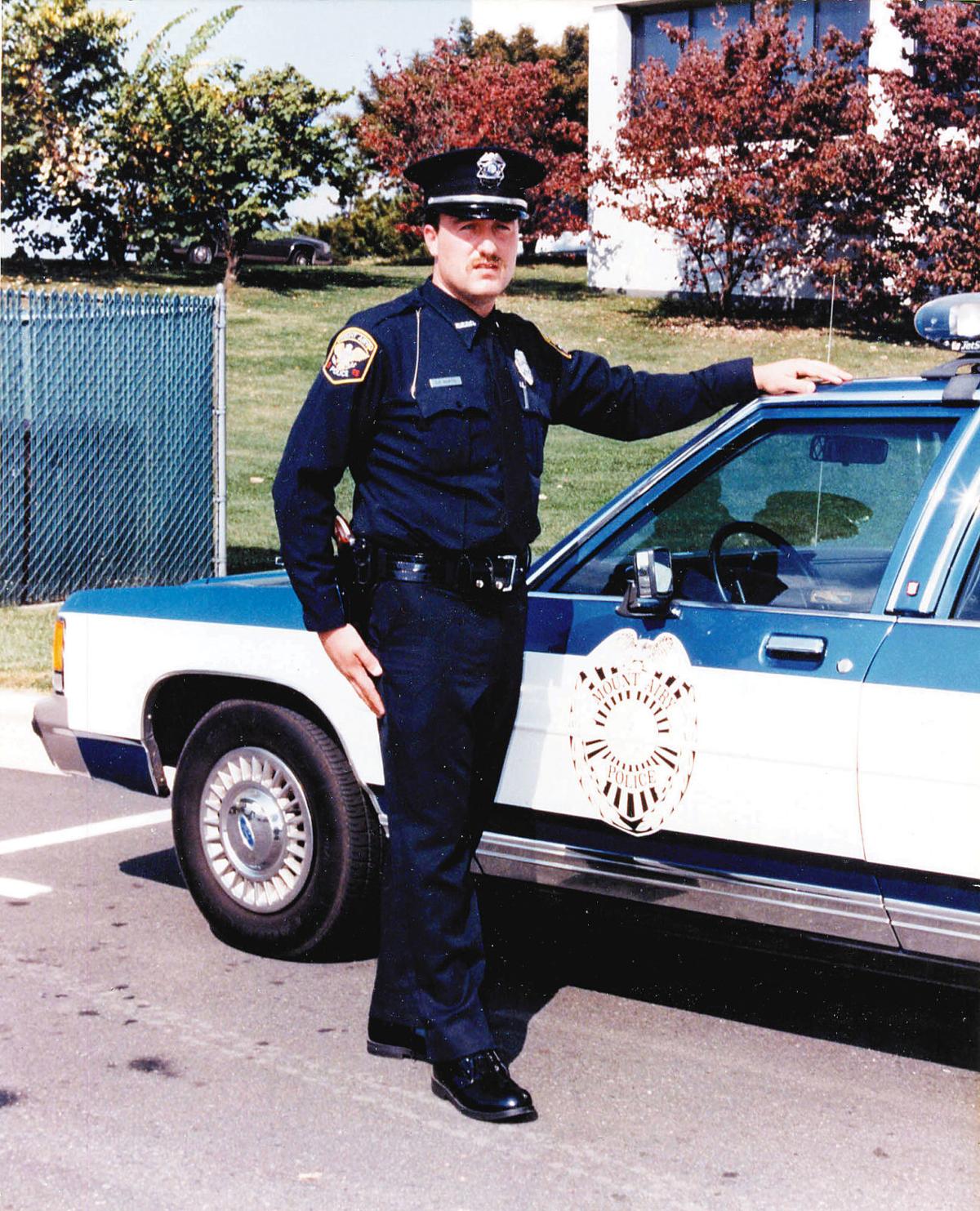 Jonesville Police Officer Gregory Keith Martin, shot to death in 1996, is shown in a family photo. 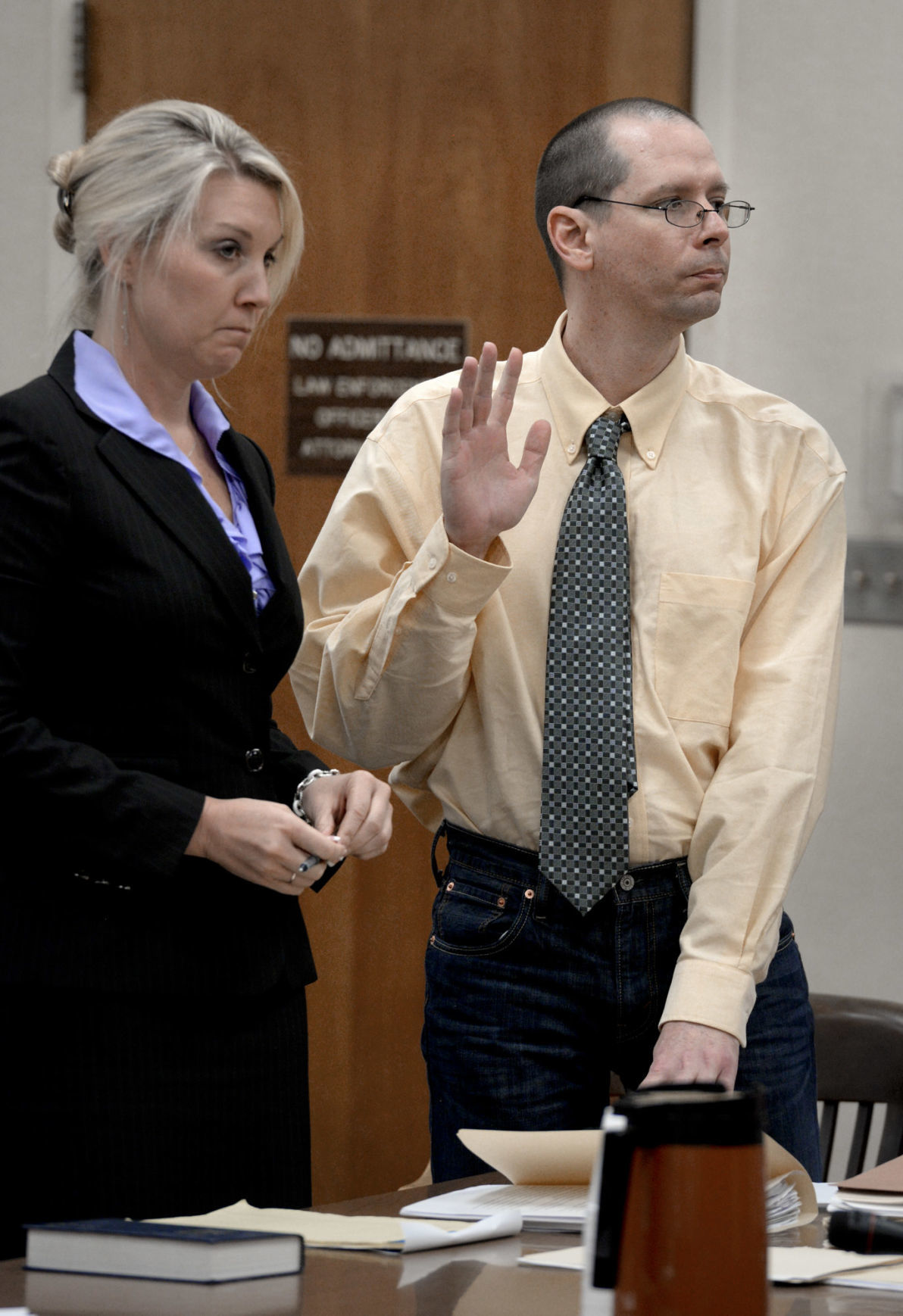 Marc Peterson Oldroyd, right, is sworn in during his plea to second-degree murder for the 1996 slaying of Jonesville, N.C., police Sgt. Gregory Martin, in the Yadkin County Courthouse Monday, June 2, 2014. At left is Oldroyd’s attorney, Ashley Cannon.

A man’s convictions for his role in the murder of a Jonesville police officer in 1996 were overturned Tuesday.

The N.C. Court of Appeals ruled the indictment should have included the specific names of the people he and two other men had planned to rob at a diner before the fatal shooting of the officer during a traffic stop.

The court threw out all the convictions because the man, Marc Peterson Oldroyd, 47, accepted a plea deal in which he pleaded guilty to second-degree murder, attempted armed robbery and conspiracy to commit armed robbery.

Oldroyd and the two other men — Scott Vincent Sica and Brian Eugene Whittaker — had planned to rob the Huddle House in Jonesville on Oct. 5, 1996. Sica and Whittaker drove a stolen truck to the back entrance of the diner, but Sica found that the back door was locked, and the planned robbery was abandoned. Oldroyd was in a get-away car in a nearby parking lot.

Later, Jonesville Police Sgt. Gregory Keith Martin stopped Sica and Whittaker on Interstate 77 and asked both men to step out of the truck.

Sica pulled out his handgun and fired nine times — five of those shots hit Martin in the head and a sixth one grazed his head. Martin died at the scene.

In 2012, Sica, Oldroyd and Whittaker were arrested and charged in Martin’s murder. Sica was convicted in March 2014 of first-degree murder and other charges and was sentenced to life in prison without the possibility of parole. He died in 2016.

The indictment alleged that Oldroyd did “attempt to steal, take and carry away another’s property, United States currency, from the person and presence of employees of the Huddle House.”

The indictment also said that Oldroyd “committed this act by having in possession and with the use and threatened use of a firearm, a 9mm handgun, whereby the life (sic) of the Huddle House employees (sic) threatened and endangered.”

Saying that the alleged crime was committed against employees of Huddle House wasn’t good enough, the court ruled in its decision.

The court said that attempted armed robbery is a crime against a person and that’s why indictments must name a specific victim.

Judge Wanda Bryant dissented, arguing that the language in the indictment was sufficient enough and that the convictions should stand.

The ruling on Tuesday means that the case will go back to Yadkin Superior Court. Yadkin County prosecutors would have to seek a new indictment against Oldroyd from a grand jury and then either offer a new plea deal or go to trial.

Tom Horner, the district attorney for Yadkin County, said because there was a dissenting opinion from the N.C. Court of Appeals’ decision, prosecutors have the right to seek an appeal with the N.C. Supreme Court.

He said his office plans to ask the N.C. Attorney General’s Office to file an appeal.

Emily Holmes Davis, an appellate attorney for Oldroyd, declined to comment on Tuesday.

Jonesville Police Officer Gregory Keith Martin, shot to death in 1996, is shown in a family photo.

Marc Peterson Oldroyd, right, is sworn in during his plea to second-degree murder for the 1996 slaying of Jonesville, N.C., police Sgt. Gregory Martin, in the Yadkin County Courthouse Monday, June 2, 2014. At left is Oldroyd’s attorney, Ashley Cannon.