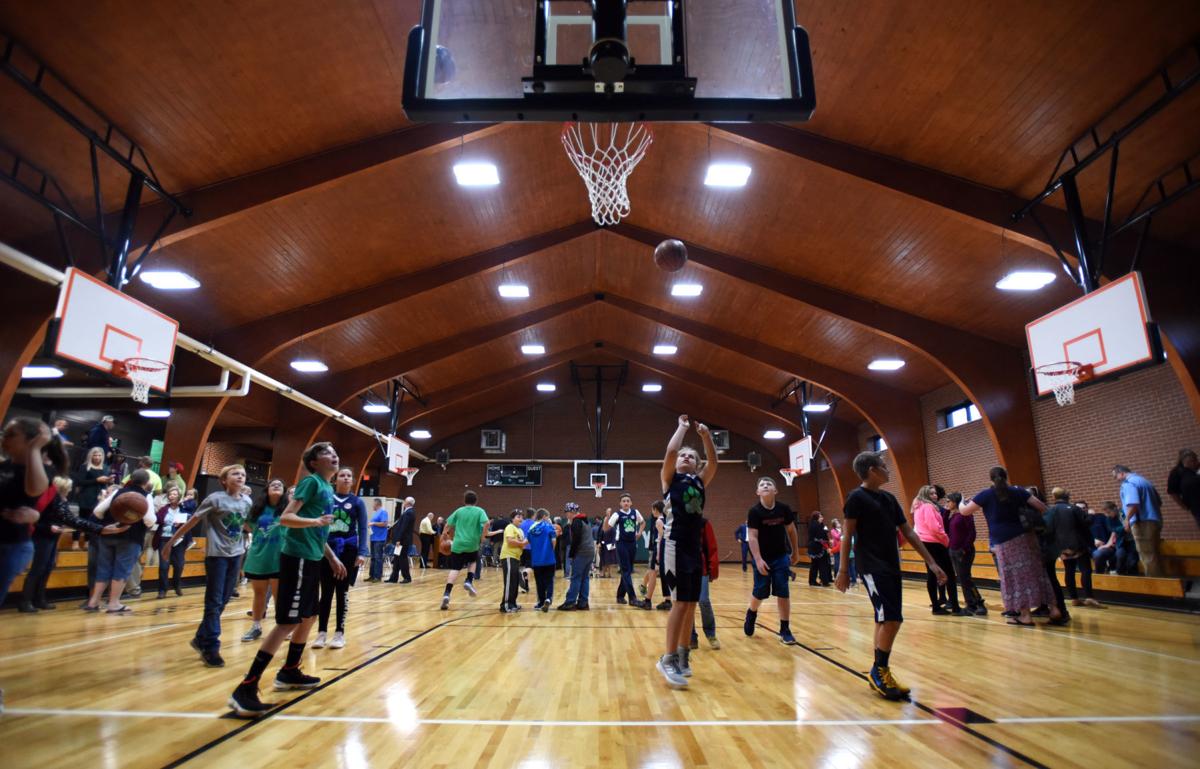 Haidyn Hester, a sixth-grader at Courtney Elementary School in Yadkin County, takes a shot as classmates wait for a rebound after Tuesday’s dedication ceremony of the school’s new gym. A tornado destroyed the original gymnasium on May 24, 2017. The new gym features many of the same architectural elements as the old one but updated to meet modern building codes. School officials wanted to have the gym open for basketball season, which starts Thursday. 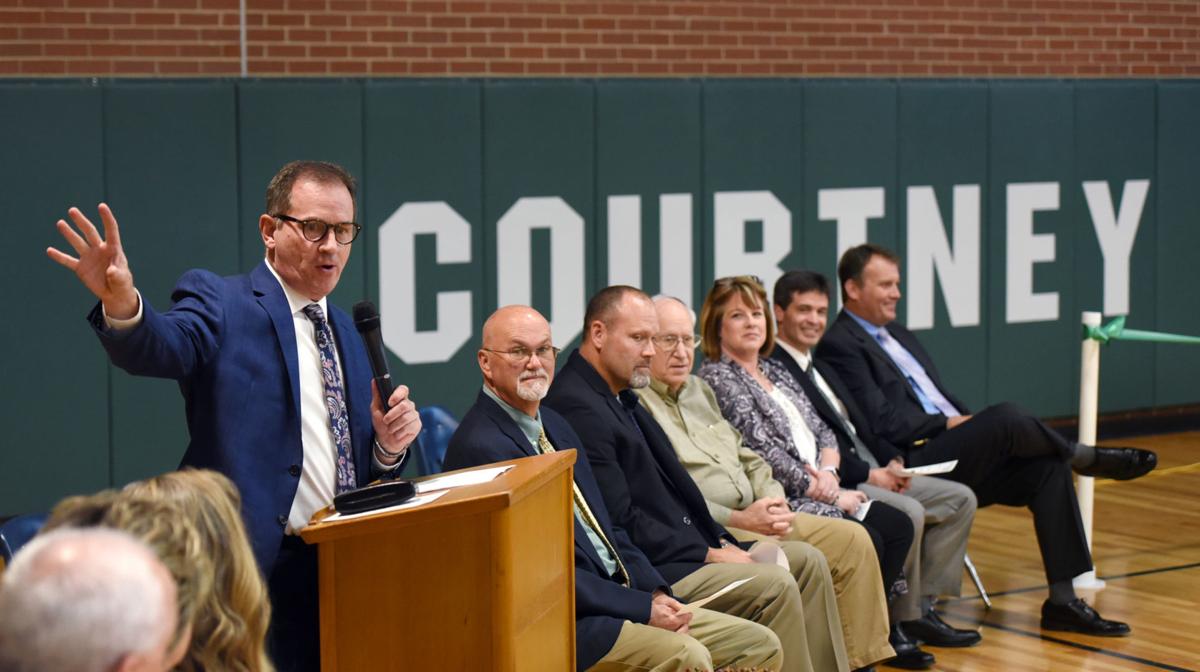 YADKINVILLE — Nearly 18 months after a tornado ripped away half the roof of Courtney Elementary School’s gym, a replacement opened to the public Tuesday, with many of the old gym’s distinctive features rebuilt, preserving its unique look.

Aileen Steelman, a longtime member of the community who put many a basketball through the old gym’s hoops, toured the new one two weeks ago and liked what she saw.

“I was so hoping they would build it back the way it was,” said Steelman, 74. “I didn’t want it to be some modern-style thing that everybody seems to want. But it’s pretty good.”

The modern-style thing was not going to fly in Courtney, a tiny community in Yadkin County that suffered widespread destruction from a tornado on May 24, 2017. The EF2 storm, with winds of up to 125 mph, toppled trees on a section of Courtney-Huntsville Road but unleashed much of its wrath on the elementary’s school beautiful 60-year-old gym, leveling walls and tearing away half of the roof.

The gym had an unusual look, with arched rafters and slatted ceiling made of engineered wood and a sunken floor with a walkway that ran the length of the top bleacher.

Steelman, who played in the first competitive basketball game in the gym in early 1959 as part of the Courtney High School Panthers, was devastated by the wreckage. She played and coached in the gym and taught at the school for nine years.

“That gym is my life,” she said after the tornado struck.

Recognizing the gym’s unique architecture, school officials decided early on to restore the gym’s character as much as possible during the reconstruction, said Todd Martin, the superintendent of Yadkin County Schools.

Architects for the project studied the original designs of the gym to help them better replicate it during reconstruction, Martin said.

The new gym includes the wooden arches and pine-board ceiling that gave the old gym such a warm feel, a sharp contrast to the steel beams and aluminum ceilings that create sterile environments in many modern gyms.

“I think people will be amazed at how closely it resembles the old gym,” Martin said.

Some features could not be replicated because they did not meet current building codes. For instance, this gym will not include the old “crow’s nest,” which was a wooden box mounted to a wall that was accessed by climbing a ladder. It gave spectators an extraordinary place to watch a game.

A wheelchair lift has also been added.

The gym’s construction cost $1.3 million, most of which was covered by insurance.

The school’s physical education classes had been meeting in a multipurpose room during inclement weather. The school’s recreation basketball team played its games at a nearby church.

“It’s not exactly as it was, but they got as close as they could,” Steelman said.

Haidyn Hester, a sixth-grader at Courtney Elementary School in Yadkin County, takes a shot as classmates wait for a rebound after Tuesday’s dedication ceremony of the school’s new gym. A tornado destroyed the original gymnasium on May 24, 2017. The new gym features many of the same architectural elements as the old one but updated to meet modern building codes. School officials wanted to have the gym open for basketball season, which starts Thursday.