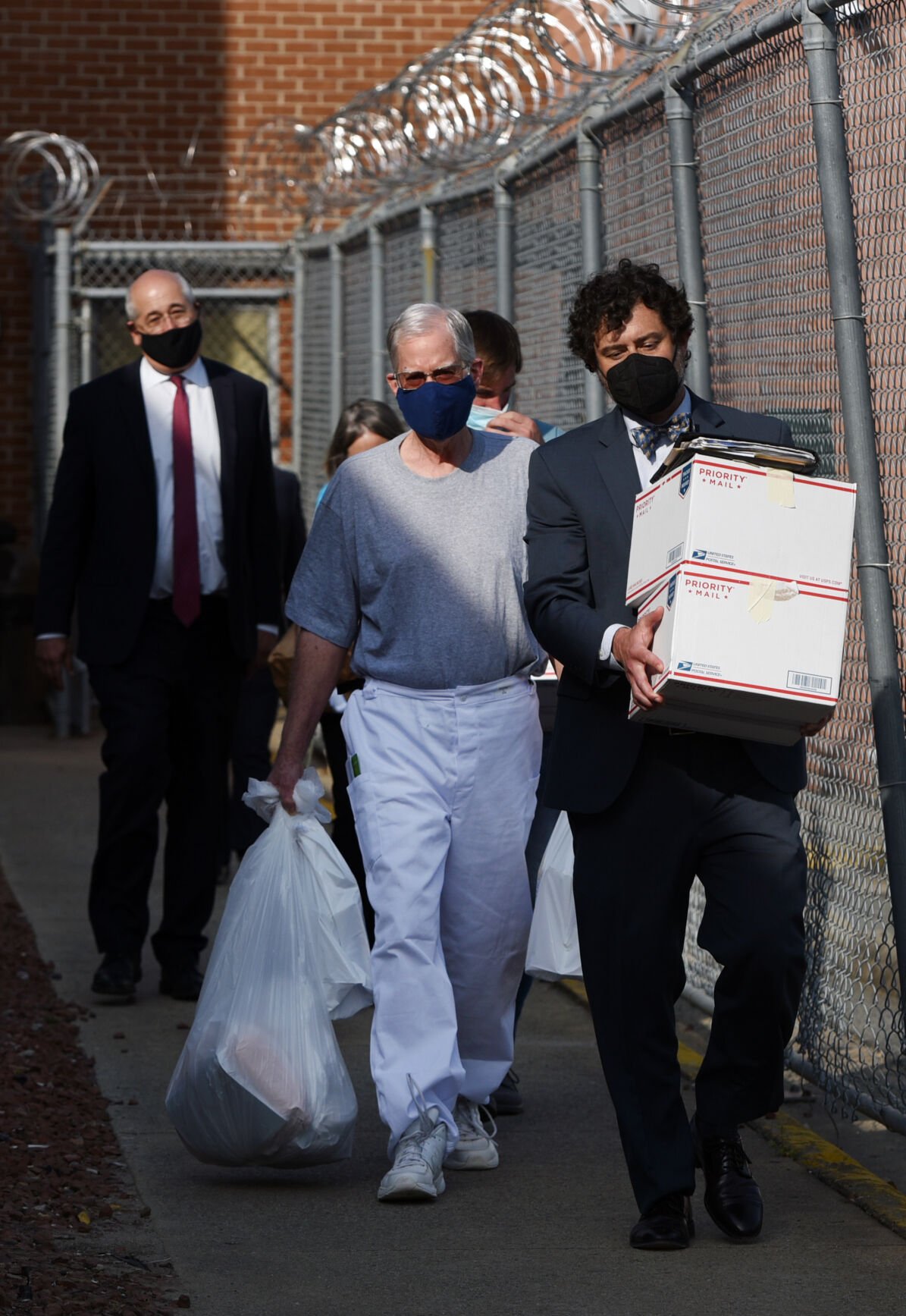 Thomas Martens (second from right) leaves the Davidson County jail Wednesday after being freed on bond. He and his daughter, Molly Corbett, were convicted of murder on Aug. 9, 2017, in the death of Molly's husband, Irish businessman Jason Corbett. Martens was previously convicted of the murder charge, but the conviction was overturned. 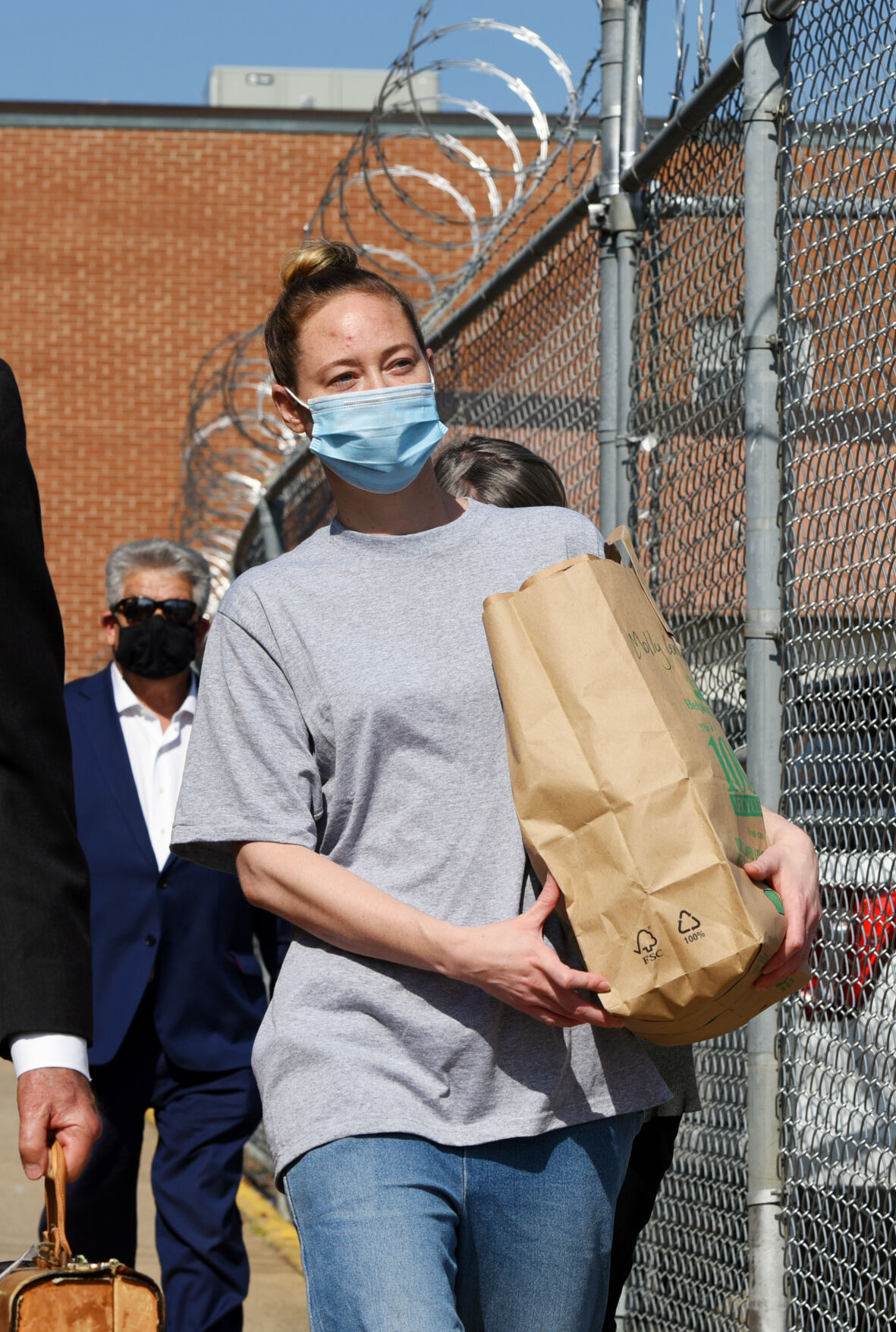 Molly Corbett leaves the Davidson County jail Wednesday after being freed on a $200,000 bond on a second-degree murder charge in the death of her husband.

Late Wednesday afternoon, Molly Corbett and Thomas Martens separately walked out of the Davidson County Jail, each free on a $200,000 bond for a charge of second-degree murder in the 2015 death of Irish businessman Jason Corbett, Molly’s husband.

Judge Mark E. Klass of Davidson Superior Court held a hearing to consider a motion to set bond a month after the N.C. Supreme Court upheld a lower appellate court’s decision to overturn the second-degree murder convictions that sent Molly Corbett and her father, former FBI agent Martens, to prison for up to 25 years. The appellate courts said that the trial judge had made certain errors that substantially deprived Molly Corbett and Martens from proving self-defense and having a fair trial.

Last week, the two were transported from state prisons to the Davidson County Jail, where they were held without bond.

Their attorneys asked for bond to be set at $200,000 or even lower, saying that they posed no threat to the community and did not pose a flight risk.

Assistant District Attorney Alan Martin recited the graphic details of what Molly Corbett and Martens were accused of doing to Jason Corbett and argued that the nature of the crime, the weight of the evidence and their financial resources called for a bond of $1 million each for the father and daughter.

Jason Corbett, 39, was found beaten to death in the early morning hours of Aug. 2, 2015 in the Davidson County home he shared with his wife, Molly Corbett, and his two children, Jack and Sarah, from his first marriage. Molly Corbett had been hired as an au pair for Jason’s children while Jason lived in Ireland, and they began dating. They married in 2011 and moved to the Meadowlands, a golf community in Davidson County. Prosecutors said Molly Corbett and Martens beat Jason to death with a baseball bat and a paving brick. They said the two crushed Jason’s skull and hit him at least 12 times in the head.

Martens testified at the first trial that he beat Jason Corbett repeatedly in an attempt to save the life of his daughter and himself after he said he saw Jason choking Molly Corbett.

Klass set bond at $200,000 and ordered that Martens and Molly Corbett give up their passports (Molly’s attorney said she no longer had one) and not have any contact with anyone in Jason Corbett’s family, including Jason’s two children, Jack and Sarah. They also must appear in court when ordered to do so. Molly Corbett and Martens will likely reside in Knoxville, Tenn., where the Martens’ have a home.

On Wednesday, Molly Corbett, 37, no longer had the blond hair she had during the August 2017 trial. Her hair was now brunette and tied up in a bun. She wore a dark blue jail jumpsuit and orange crocs. Her ankles were shackled. Her father wore an orange jail jumpsuit.

At 4:09 p.m., Molly Corbett, dressed now in a gray T-shirt and jeans, came out, surrounded by her attorneys, Doug Kingsbery and Walter Holton, her mother, Sharon Martens, and one of her brothers.

An hour later, at 5:15 p.m., Thomas Martens walked out, carrying some boxes, and surrounded by his attorneys, Jones Byrd and David Freedman. Both Molly Corbett and Martens declined to comment.

In response to something David Freedman asked as he got into a car, Martens gave a thumbs-up before heading off.

The next step is unclear. Prosecutors and attorneys will share evidence in the case. Usually, either a trial date is set or a plea arrangement is negotiated.

Tracey Corbett Lynch, Jason’s sister, and her husband, had criticized Garry Frank, Davidson County’s district attorney, saying he had offered a deal for the two to plead guilty to manslaughter. She said last week that Molly Corbett and Martens were given a week to decide if they would accept the offer.

She issued a statement late Wednesday, saying that Frank had decided to seek a retrial of Molly Corbett and Martens.

“We look forward to a date being set for a retrial at the earliest opportunity,” she said.

Frank has previously declined to confirm whether a plea deal had been offered. He has said he does not comment publicly on pre-trial negotiations. He reiterated that Wednesday.

At the hearing Wednesday, Assistant District Attorney Alan Martin recounted what he alleged was strong evidence suggesting that the two brutally murdered Jason Corbett. He described the testimony of a medical examiner from the first trial, who said that Jason Corbett’s skull was crushed and that he had 10 different impact sites on his head from where he was struck. Two of those impact sites showed that he had been struck at least twice. That meant that Jason Corbett was struck in the head at least 12 different times. He was struck at least once after he had died, Martin said.

He also told Klass that Martens called 911 and told the dispatcher that he thought he had killed Jason Corbett.

Martin argued in court that Martens and Molly Corbett have a lot of family support and real property in Tennessee and North Carolina.

But attorneys for Molly Corbett and Martens said the two have no prior criminal convictions and that they complied with previous pre-trial release conditions in connection with the second-degree murder charge.

Freedman, one of Martens’ attorneys, read a letter from a correctional official, saying that Martens had been a model prisoner. He also said Martens not only called 911 but also cooperated for four months with law-enforcement before he was even criminally charged. And after he was charged, he complied with pre-trial release conditions and came to every court hearing, even when the judge’s decisions didn’t go his way.

They also referenced the heavy media attention that the case has received.

“There is literally no place for this young woman to hide, even if she wanted to,” Kingsbery said in court.

It would be punishment if a judge set a higher bond when two appellate courts found that they did not get a fair trial, said Byrd, Martens’ attorney.

After the hearing, family for Molly Corbett and Martens gathered in the hall outside the courtroom. They formed a circle around Sharon Martens.

After Kingsbery explained the process to the family, Michael Earnest, Molly’s uncle, walked up.

“They’re going to be out,” he said, taking a second to compose himself. “There was very strong evidence that Tom saved Molly’s life that night. ..He was doing what any of us who are fathers would do if we found ourselves in that moment, and that was to defend his daughter.”

He later said, “It’s a huge first step. But we know it’s not over.”

“We have to stand together against those who think they are above the law, those who can cruelly inflict injury in the most heinous, barbaric way, enough to cause death ten times over,” Tracey Corbett Lynch and her husband, David Lynch, said in a statement.

It’s unclear when a trial date will be set. The COVID-19 pandemic has created a backlog of criminal cases. Martin indicated in court that it might be more than a year before a trial can begin.

Investigators said that contraband and drugs were hidden in property that was delivered to the jail.

Thomas Martens (second from right) leaves the Davidson County jail Wednesday after being freed on bond. He and his daughter, Molly Corbett, were convicted of murder on Aug. 9, 2017, in the death of Molly's husband, Irish businessman Jason Corbett. Martens was previously convicted of the murder charge, but the conviction was overturned.

Molly Corbett leaves the Davidson County jail Wednesday after being freed on a $200,000 bond on a second-degree murder charge in the death of her husband.