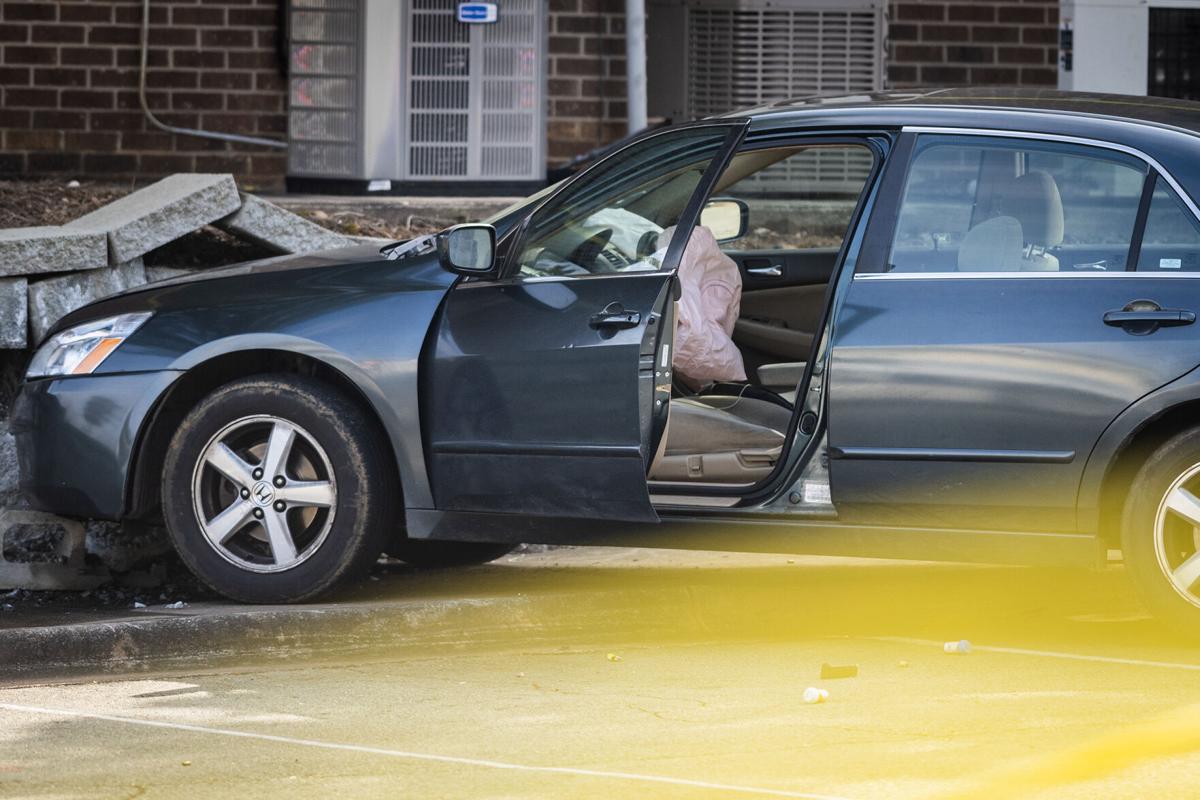 A vehicle rests against a retaining wall at the scene of a fatal shooting at Summit Square apartments on Wednesday in Winston-Salem. 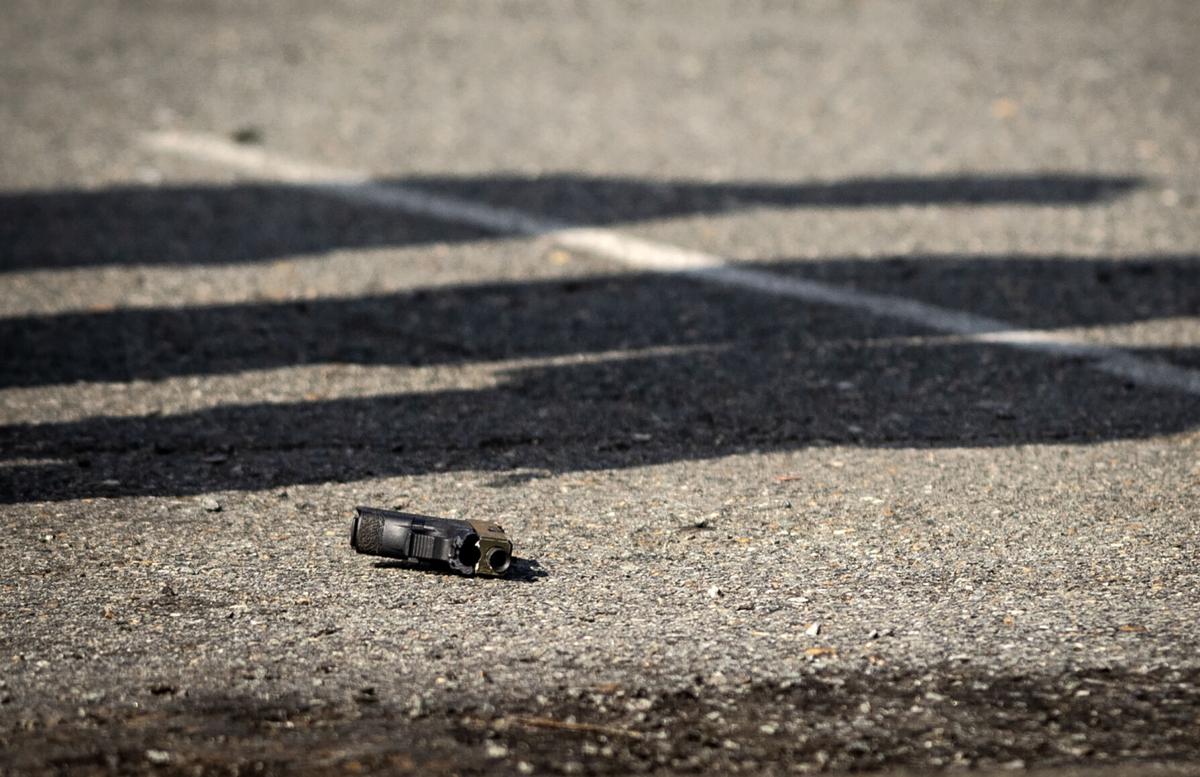 A gun lies in the parking lot near investigators and a body under a sheet at the scene of the shooting. 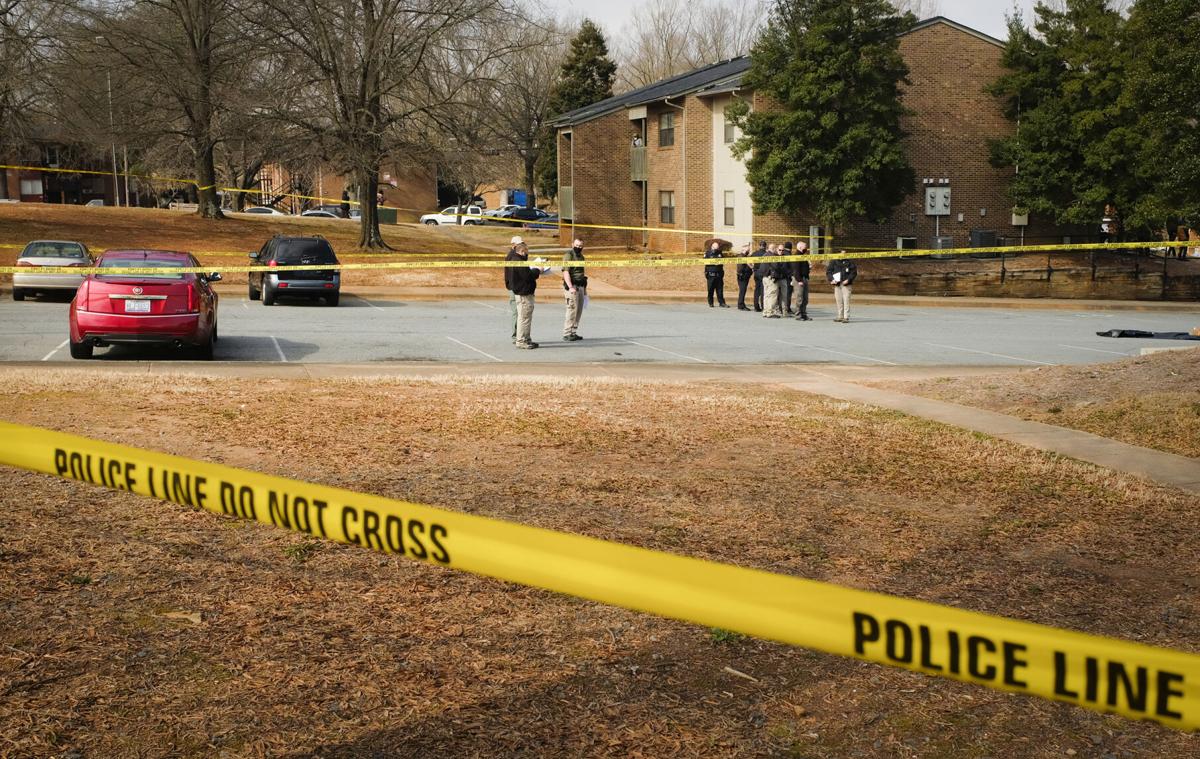 Authorities are investigating a fatal shooting that happened Wednesday morning at an apartment complex near the corner of Cleveland Avenue and 12th Street in Winston-Salem.

Police were called to the Summit Square apartments around 10:30 a.m. They believe the male victim and his attacker had met in the apartments’ parking lot, at 1204 E. Twelfth St.

Emergency medical responders said the victim died at the scene. During their investigation, police tentatively determined the identity of the man who was shot and spoke to his family members, but withheld the man’s name pending a confirmation of his identity.

In the aftermath of the gunfire, a car in the parking lot could be seen that had apparently crashed into a retaining wall near one of the apartment buildings about the time of the shooting. The driver’s door of the car was open just a few feet away from where the body of the shooting victim lay. An airbag in the car had deployed, and the front of the car was damaged.

Police have not said whether the victim was in the car or on foot when the shooting took place.

Robert Robinson said he was inside his apartment at Camden Station Apartments across the street when heard two gunshots Wednesday morning.

Robinson said that after he heard the gunfire, he heard the loud noise made by the car when it struck the wall. When he did look out, he said he saw a man running east alongside the apartment building closest to where the car struck the retaining wall.

Robinson wondered if the shooting was the aftermath of another incident Tuesday night, when shots were fired near the same area as on Wednesday.

Police said the shooting was the third homicide to occur in 2021, compared to two homicides for the same period in 2020.

Deal reached to get Calif. kids back in classrooms

The man charged with attempted murder in the shooting of a Kernersville police officer on Sunday is a patient in a hospital, although officers…

Laura Lee Steele, 52, of Thomasville remains in jail after a federal judge said Tuesday he needed more time to decide whether she should be released into the custody of her husband, a recently retired assistant chief with the High Point Police Department. The judge said he could rule by Friday.

Teen shot when someone fired through his living room window in Winston-Salem, police say

A 14-year-old was shot when someone fired into a home in Winston-Salem early Friday morning.

A former High Point police officer facing charges for her alleged role in the Jan. 6 U.S. Capitol breach will remain in jail, a federal judge …

An 8-year-old girl was shot in the head Friday in the 4700 block of Indiana Avenue in Winston-Salem, authorities said.

N’denezsia Monique Lancaster of Greensboro has said she was sorry for what she did, blaming her behavior on a bipolar disorder.

Thomasville man accused of soliciting a teenager for sex

A Thomasville man is accused of soliciting a child for sex, authorities said Friday.

A vehicle rests against a retaining wall at the scene of a fatal shooting at Summit Square apartments on Wednesday in Winston-Salem.

A gun lies in the parking lot near investigators and a body under a sheet at the scene of the shooting.