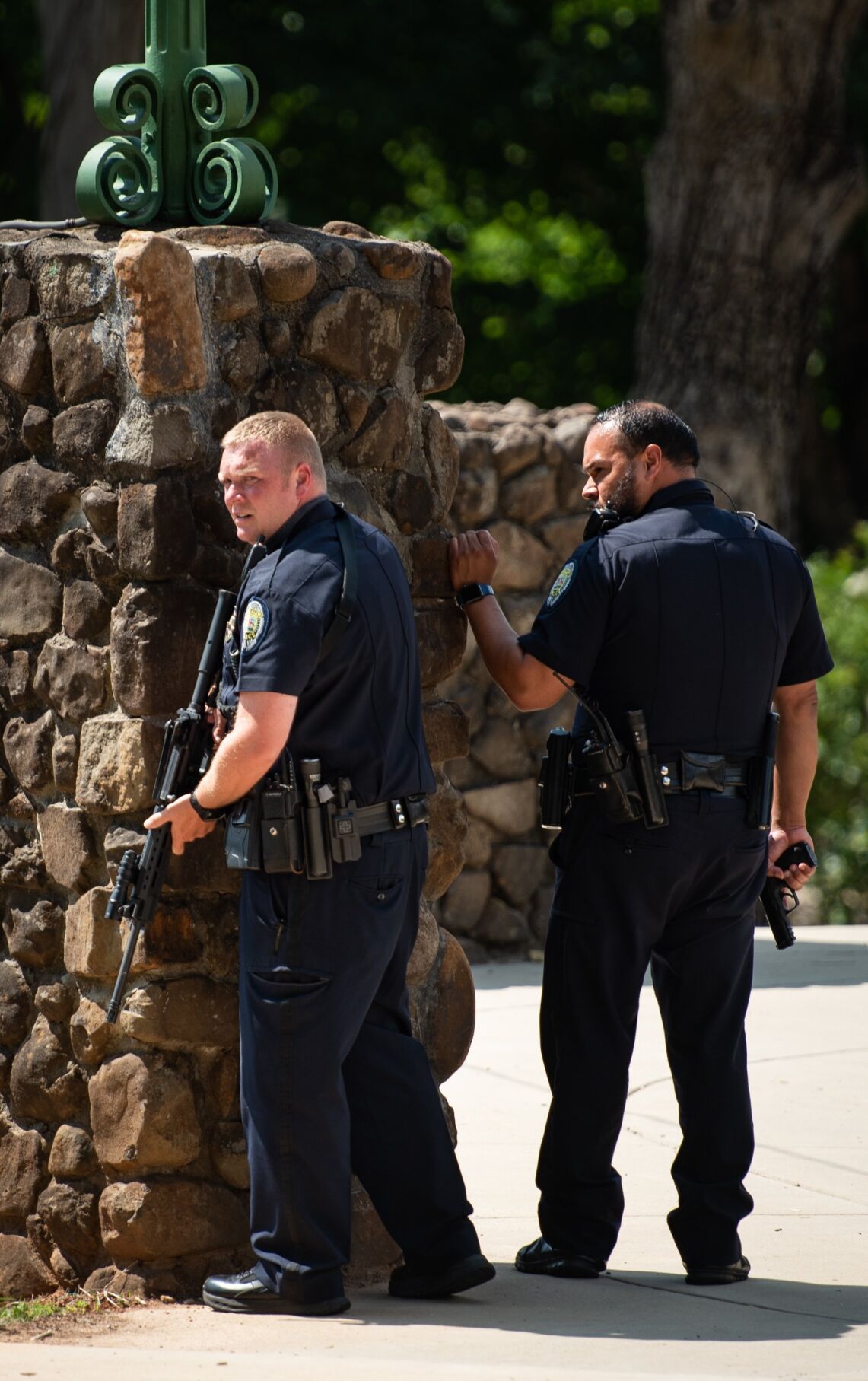 Winston-Salem police take cover during a shootout on Monday at Hanes Park in Winston-Salem. 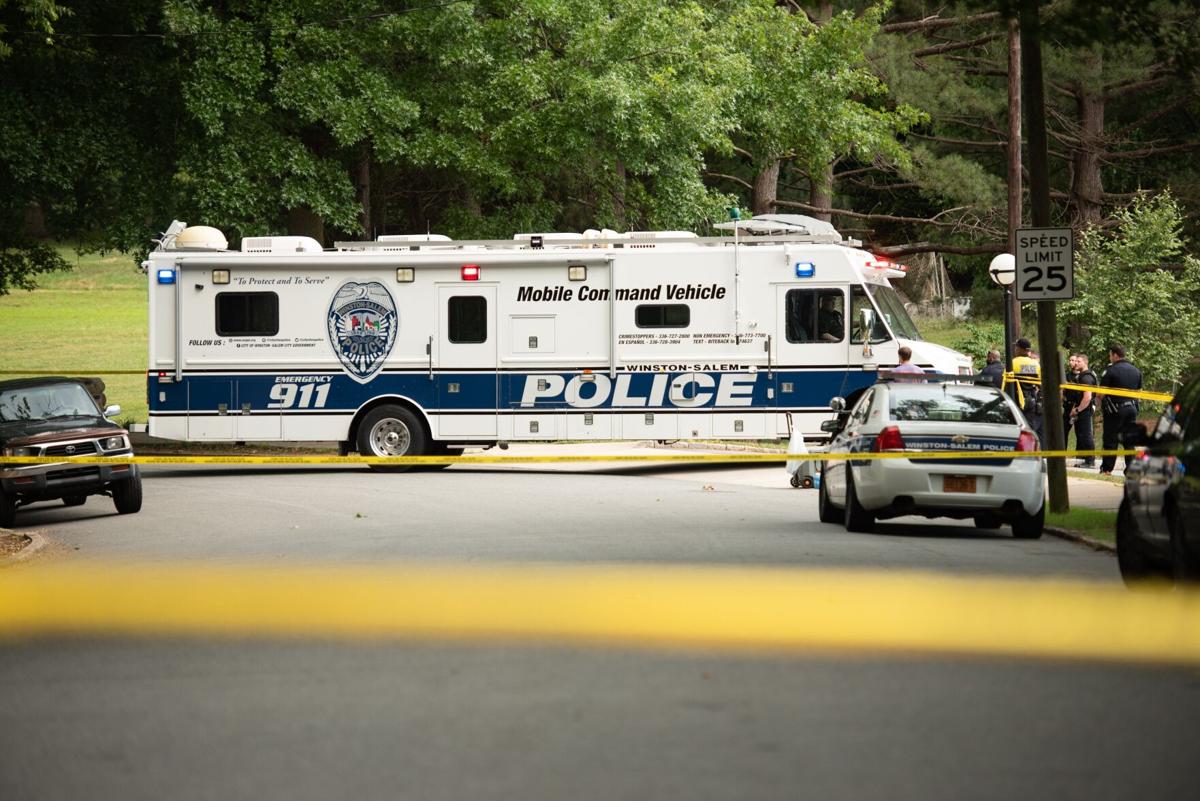 Winston-Salem police mobile command unit at the scene of a shootout on Monday at Hanes Park.

The 26-year-old Winston-Salem man who authorities say shot up a police substation and had a shootout with police officers in Hanes Park on Monday is now officially charged with killing his mother and grandmother.

William “Spanky” Coleman Scott was charged with two counts of felony murder on Wednesday morning. He is accused of killing his mother, Kimberly Kyle Scott, 62, whose body was found on Monday at 1708 Curraghmore Road in Clemmons. He is also accused of killing his 84-year-old grandmother, Glenda Snow Corriher, whose body was found Monday at her home in the Tabor View condominium development off Polo Road in Winston-Salem. Their bodies were found after the Hanes Park shootout.

Scott, whom police officers shot at Hanes Park, was released from a local hospital Tuesday and taken to the Forsyth County Jail, where he had been held on a charge of attempted murder of a law-enforcement officer. Scott was served with the arrest warrants for murder just after 10 a.m. Wednesday.

Winston-Salem Police Chief Catrina Thompson announced the murder charge against Scott in the death of his grandmother during a news conference on gun violence that was being held Wednesday morning. The Forsyth County Sheriff’s Office sent a news release on the murder charge in Kimberly Scott’s death shortly after Thompson made her announcement.

Investigators have not said which relative they allege Scott killed first. Kimbrough said Wednesday that investigators are trying to determine the sequence of events surrounding the deaths of Scott’s mother and grandmother.

“Investigators have pretty much narrowed it down,” he said.

The chain of events on Monday leading to the shootout began at 3:34 p.m. when a man fired more than a dozen shots at a police substation on North Point Boulevard. Officers pursued the shooter, and Sgt. Peter Watkins, a 19-year veteran with the police department, found the car Scott was driving on University Parkway near Northwest Boulevard. He chased Scott’s car, and police said body camera footage showed Scott firing his gun at Watkins and other police officers as they pursued Scott on Northwest Boulevard.

Scott dropped the rifle, according to police, and the officers chased him into Hanes Park. That’s when Scott fired at the officers from his handgun. Watkins, Lt. Lee S. Wright and Cpl. James O. Singletary, fired back, and Scott was struck. Police have not said how many times Scott was struck or where.

As is routine when police officers shoot someone, the N.C. State Bureau of Investigation will investigate the shooting. The three officers are now on administrative duty, and ultimately, Forsyth County District Attorney Jim O’Neill will determine whether the officers used appropriate force.

The family of Kim Scott released a statement Wednesday in which they asked for “space to grieve as a family and pick up the pieces of our lives.”

“Words cannot convey the heartache and shock we feel at all that has taken place,” the family said. “Our pain is compounded by the circumstances surrounding our loss. While we may never know all the reasons why this has happened, we can say that we know, now more than ever, the agony and heartbreak that failing mental health can bring to a family.”

The family asked for prayers, thanked law enforcement officers and the Wake Forest Baptist Chaplaincy for their help, and expressed gratitude for the concern people have shown.

William Scott is a 2013 graduate of West Forsyth High School and formerly wrestled for the school.

Scott was also convicted of misdemeanor assault, inflicting serious injury in a 2016 incident. An arrest warrant alleges that he punched a woman so hard that she had hairline fractures on her face and a severe concussions.

He also has been charged several times with resisting a public officer and with armed robbery, attempted armed robbery and conspiracy to commit armed robbery, stemming from a 2013 incident in Mecklenburg County. All those charges were voluntarily dismissed.

It is not clear how Scott obtained the gun and assault rifle. He was denied a pistol permit on Oct. 17, 2019 due to his assault conviction. He unsuccessfully appealed the denial of his pistol permit.

He also sued Wake Forest University and the U.S. Department of Education, saying he was denied safety equipment information and that the school ignored his concerns about safety at Graylyn International Conference Center, where he worked. He demanded $1 billion from both institutions and alleged his supervisors committed an act of attempted murder because they exposed him to second-hand smoke in a closed environment.

Scott is scheduled to appear on July 1 in Forsyth District Court on the two murder charges and the attempted murder charge.

WATCH NOW: Suspect loaded in ambulance after shooting at Hanes Park on June 14, 2021

Winston-Salem police take cover during a shootout on Monday at Hanes Park in Winston-Salem.

Winston-Salem police mobile command unit at the scene of a shootout on Monday at Hanes Park. 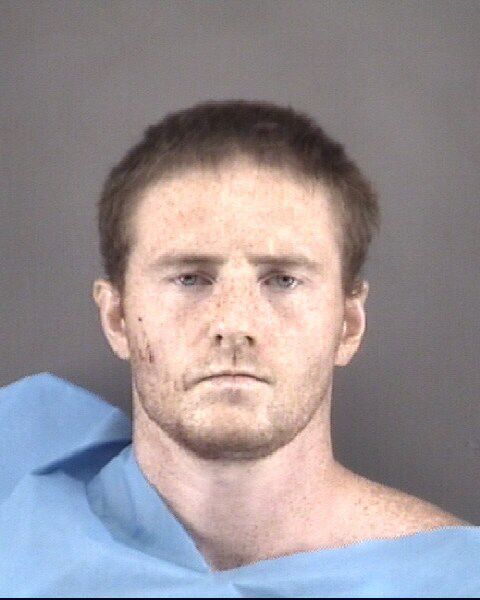