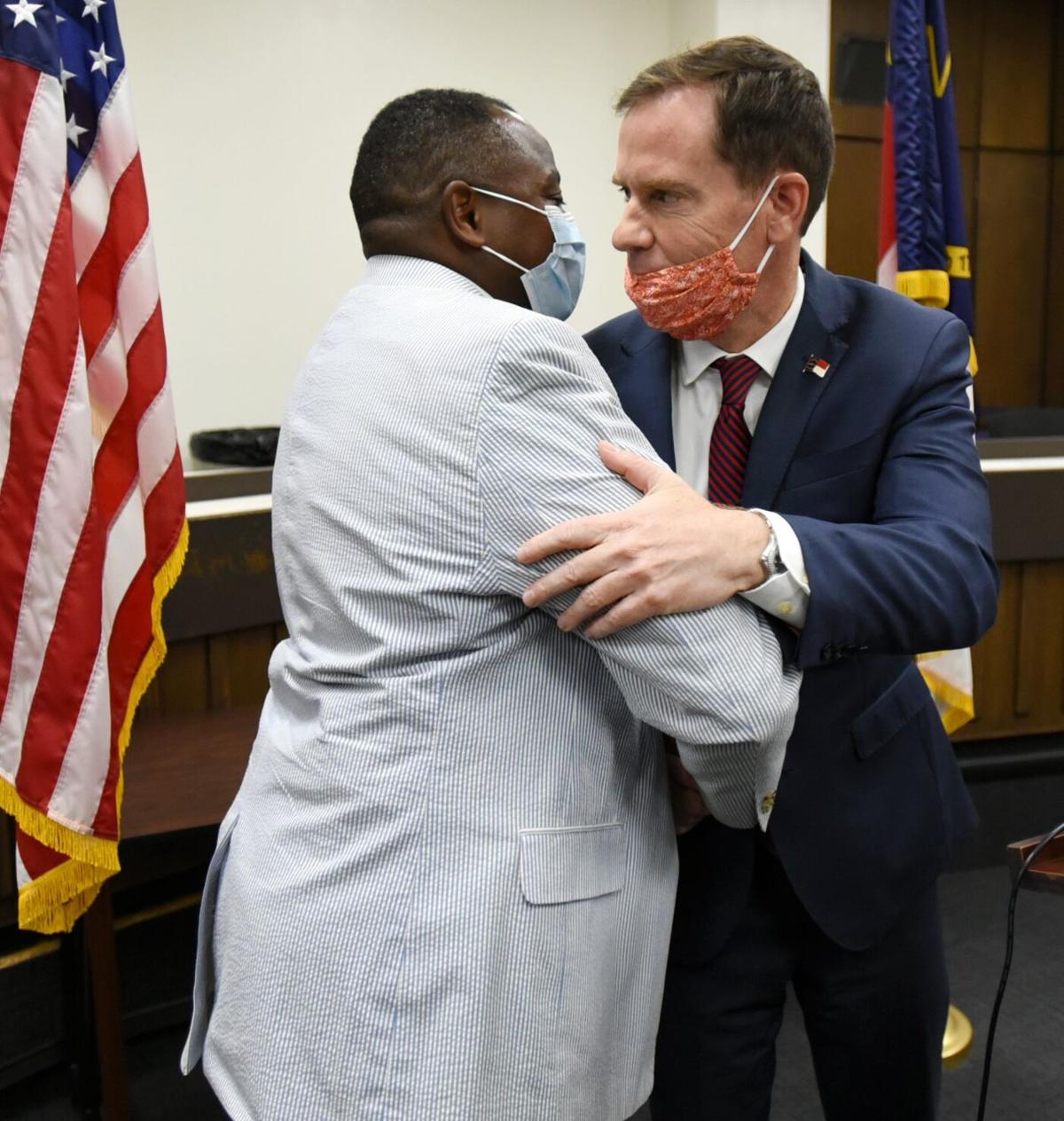 Bishop Todd Fulton (left) of Mount Moriah Outreach Center and District Attorney Jim O’Neill hug after a news conference announcing a new program that will help people get back their driver’s license. 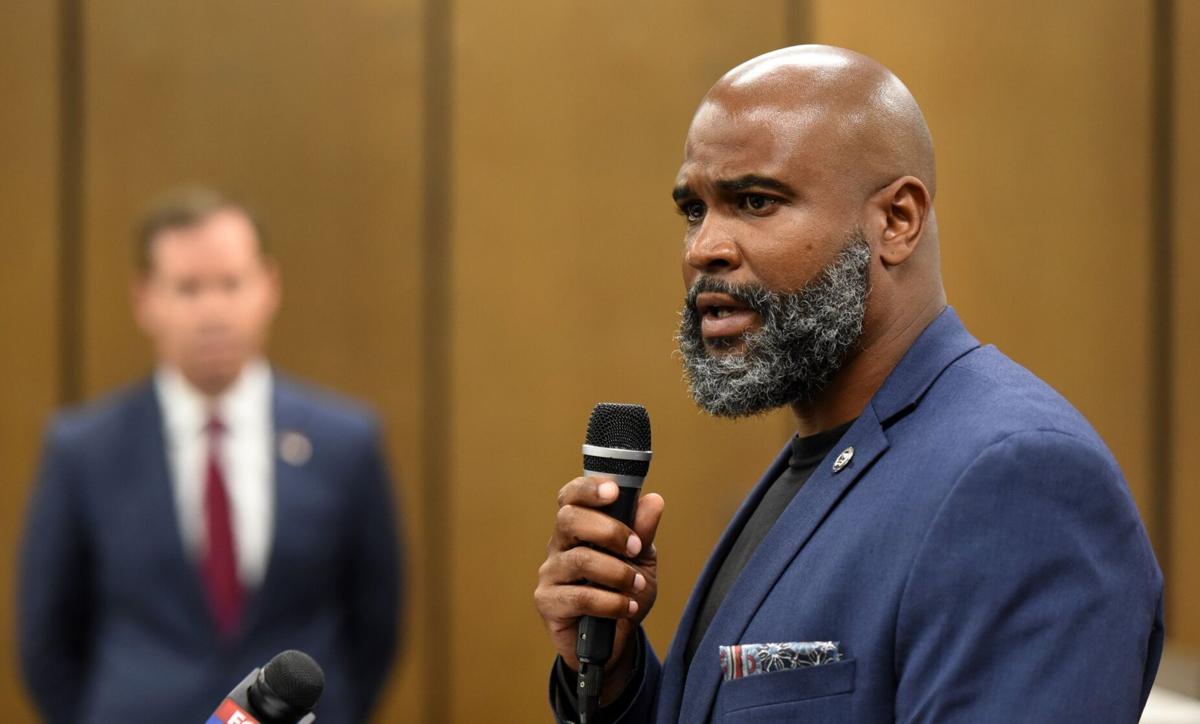 Winston-Salem City Council Member James Taylor speaks during a news  conference announcing a new collaboration between District Attorney Jim O'Neill and the city that will help people who have lost their driver's license.

DriveForsyth.org, the website for the new program DRIVE, announced Monday, went live later than expected on Tuesday, Aug. 3. Forsyth County District Attorney Jim O’Neill said that city officials worked Tuesday on correcting the issues. People interested in the DRIVE program also can get applications at the Forsyth County District Attorney’s Office, which is located on the seventh floor of the Forsyth County Hall of Justice, 200 North Main St. and is open from 8 a.m. to 5 p.m. Monday through Friday.

In 2015, a member of Bishop Todd Fulton’s church couldn’t get a promotion on his job for a simple reason — he had lost his driver’s license.

The man worked for a heating and air company but he could not be promoted to technician without a driver’s license, Fulton said. Through a collaboration between the Forsyth County District Attorney’s Office and the Ministers’ Conference of Winston-Salem and Vicinity, the man was able to get back his driver’s license — and he got the promotion.

On Monday, Forsyth County District Attorney Jim O’Neill announced a new program called DRIVE that expands the earlier effort to help more people get their driver’s license back. He said that when his office did the program in 2015, he and others were shocked by the response. About 250 people showed up that first day, and the program has since become a model for similar programs in other counties in North Carolina.

O’Neill said he, Chief Assistant District Attorney Jennifer Martin and others continued to talk about expanding the program. The result was DRIVE.

The Winston-Salem City Council has provided about $275,000 for the DRIVE program. That money pays for three positions, including an assistant district attorney and a legal assistant.

O’Neill said if drivers have something like an expired registration, that is usually easy to fix. They can renew their registration and come back to the courthouse with the proper paperwork and have the citation dismissed, he said.

“But if folks don’t come to court or don’t take care of those things, what I like to describe as what happens next is sort of like being put into the spin cycle of a washing machine,” he said.

If a law-enforcement officer pulls over someone because of a broken taillight, then discovers that the person’s license has been suspended, the person could lose his or her license for an additional three years, O’Neill said.

O’Neill said he is committed to having his office help as many people as it can, but there might be situations where people just aren’t able to get their licenses back. A group of private attorneys is helping out as well, he said.

Council Member James Taylor, who is the chair of the council’s public safety committee, said that out of the 57,000 people whose license has been suspended, the overwhelming majority of them are people of color.

And when people lose their driver’s license, they lose their ability to get educational and job opportunities, he said.

“This program will get those people to those jobs and opportunities,” Taylor said. “It allows them to have opportunities in entrepreneurship.”

Mayor Allen Joines agreed that the program would provide a way for people to get out of poverty.

People can apply for the program through DriveForsyth.org, which was scheduled to go live on Tuesday. They can also go to the Forsyth County District Attorney’s Office, which is on the seventh floor of the Forsyth County Hall of Justice, 200 North Main Street.

Fulton said the program is not just about doing a good deed.

“It’s about economic sustainability and community development,” he said.

The Forsyth County Sheriff's Office said in a news release that an inmate killed himself on Monday and that it is investigating. James Michael Anderson, who was in the jail on several charges, was found unresponsive in his cell on Monday. The sheriff's office did not provide details on how Anderson is alleged to have killed himself.

A Forsyth County sheriff's deputy found a gun Thursday in a student’s backpack at Mount Tabor High School. It's the fourth gun found this mont…

A Winston-Salem man was shot and wounded Friday while he was sitting on his front porch in the city's southern section, authorities said.

A Florida man alleges in a new lawsuit that house parents sexually abused him repeatedly, starting in 1969 when he was 7-years-old. The lawsuit is the sixth one that accuses officials at the Children's Home and the Western North Carolina Conference of the United Methodist Church of ignoring and failing to prevent sexual abuse of children who lived on the Winston-Salem campus in the late 1960s and early 1970s.

After recent rash of violence, Winston-Salem/Forsyth County Schools officials to talk about guns at schools

The news conference will be held at 4 p.m. in the Board of Education auditorium.

Bishop Todd Fulton (left) of Mount Moriah Outreach Center and District Attorney Jim O’Neill hug after a news conference announcing a new program that will help people get back their driver’s license.

Winston-Salem City Council Member James Taylor speaks during a news  conference announcing a new collaboration between District Attorney Jim O'Neill and the city that will help people who have lost their driver's license.