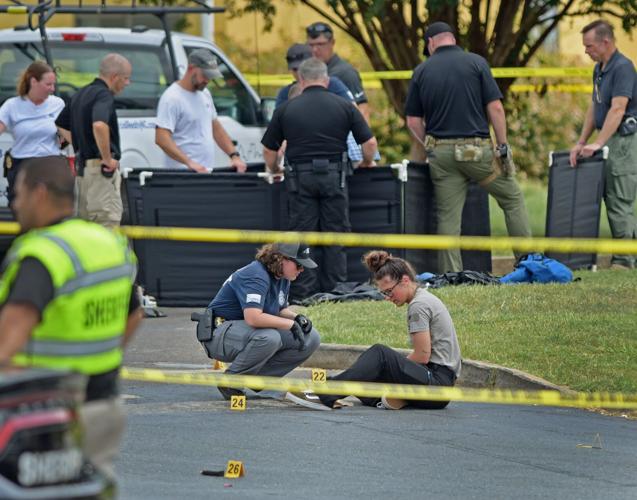 Law enforcement officials investigate the scene where Alexander Dekontee Weah was fatally shot at the Speedway on Lewisville-Clemmons Road on Aug. 5. 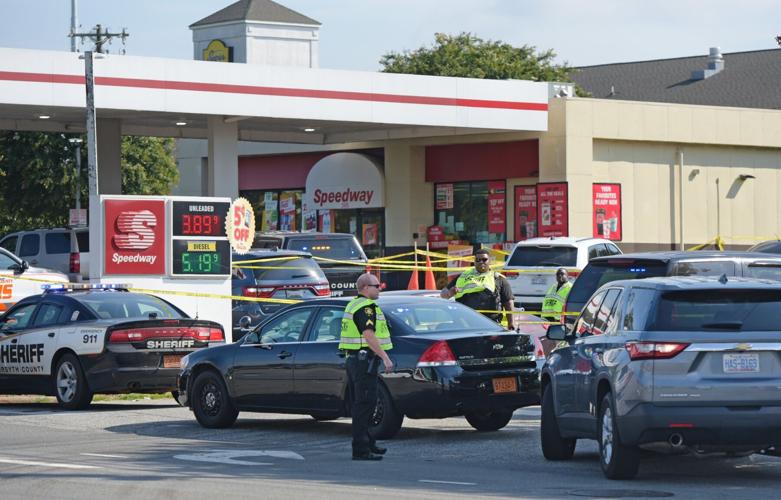 Forsyth County sheriff’s deputies stand outside the Speedway on Lewisville-Clemmons Road after the fatal shooting.

The widow of a Charlotte man who was killed by law-enforcement officers in August in the parking lot of a Clemmons convenience store says neither she nor her husband’s parents were told the officers were cleared of wrongdoing.

Malika Weah told the Journal on Monday that no one officially notified her that Forsyth County District Attorney Jim O’Neill had cleared the officers last week in the fatal shooting of her husband, 23-year-old Alexander Dekontee Weah, in early August.

Weah was shot to death just after 8 a.m. Aug. 5 as he was coming out of the Speedway convenience store on Lewisville-Clemmons Road near the Interstate 40 interchange. As many as 80 law-enforcement officers were trying to serve an outstanding arrest warrant for murder on Weah at the store.

“We haven’t heard anything from the investigation,” Malika Weah said Monday. She said she and Weah’s stepmother and father, who live in Georgia, have been trying the last few months to get information about how Weah died on Aug. 5. Investigators with the State Bureau of Investigation, which reviewed the shooting, have not provided much information, she said.

Angie Grube, a spokeswoman for the State Bureau of Investigation, said generally, the district attorney’s office in the county where the shooting occurred notifies the families. O’Neill said Monday that the SBI tried to contact Alexander Weah’s parents before this became public. Grube declined to answer any detailed questions about the Aug. 5 incident, saying such information is part of the SBI investigative file, which is not a public record.

O’Neill said Monday that after law-enforcement officers approached, Weah ran and then pulled out a gun from his waistband and fired at officers, striking one of them twice — Greensboro police officer Michael J. Ambrosio. The officers, he said, returned fire and killed Weah.

Four Greensboro police officers and Detective Paul Weis of the Charlotte-Mecklenburg Police Department fired their weapons. Greensboro police officials have declined to release the names of their four police officers. Those officers are still on administrative duty, as the department works on an internal investigation. Weis was placed on paid administrative leave and it is unclear what his status is or whether an internal investigation is still open.

Alexander Weah died from gunshot wounds to the head, torso and extremities, according to a death certificate his wife provided the Journal. An autopsy report has not been publicly released.

O’Neill’s account contradicts what Talaya Hinson, who said she was dating Alexander Weah, told the Journal in the immediate aftermath of the shooting. She said that as Alexander Weah was coming out of the store, an officer pointed a gun at him and demanded that Weah get down on the ground. Weah ran, and the officer fired four times, striking Weah in the back twice, Hinson said

Then, she said, Weah pulled out his gun and fired once, before officers fired multiple times, killing Weah.

“The account provided by Weah’s girlfriend conflicts with the video and physical evidence at the scene, as well as statements provided by civilians and officers,” O’Neill said in a statement.

Alexander Weah was wanted for the fatal shooting of James Michael Hinson, 31, who was Talaya Hinson’s estranged husband, on Aug. 3 in Charlotte. Talaya Hinson said she was at that shooting and said that Alexander Weah shot her husband because he thought Hinson was reaching for a gun. The Charlotte-Mecklenburg Police Department said officers did not find a gun on Hinson.

Talaya Hinson could not be reached for comment Monday.

Authorities have not released a detailed account of what happened on Aug. 5, including whether officers or Weah fired first or how many times Alexander Weah was shot. Greensboro Police said in a news release that officers approached Weah as he left the store, and as officers approached, there was an exchange of gunfire.

Cambareri said the internal investigation involves multiple officers and multiple jurisdictions and that the length of an internal investigation lasts can vary depending on its complexity. She declined to give a reason for not identifying the officers. Andrea Harrell, a city attorney for the police department, has said the officers have not been identified partially for safety reasons. She has said that other Greensboro police officers who have shot or killed people have received death threats, though she did not provide specific examples.

Erin Wiggins, a spokeswoman for the Charlotte-Mecklenburg Police Department, did not respond to messages seeking comment on Monday.

The Journal and the News & Record filed a petition asking that the body-camera footage and any other recordings be released. Judge Richard Doughton of Forsyth Superior Court denied the request after a court hearing in October. Under state law, body-camera footage is not public record and requires a judge to order its release. State law also requires the spouse or family member of a person who either died or was seriously injured by a law-enforcement officer to file a petition with the court to see any footage of the incident. It would be up to a judge to determine whether to release the footage for a private viewing.

Malika Weah said a woman who was there told her that her husband did not get any medical aid. The woman did not respond to a request for comment. Talaya Hinson also said that officers did not render medical aid to Alexander Weah.

“His time of death and his time of injury was in 10 minutes,” Malika Weah said. “Nobody provided aid until the ambulance got there.”

“Alexander was a good person and he had a good heart,” she said. “When it came to certain situations, he didn’t think about things; he reacted in the moment.”

But Malika Weah said her husband was never a violent person. Malika Weah did file a restraining order against her husband that prohibited him from possessing or carrying a firearm. The order alleged that Alexander Weah had frequently carried guns and made threats he would use guns.

Malika Weah said that despite the restraining order, she never believed that he would use guns or hurt her and their now-2-year-old daughter.

She said an investigator with the SBI told her that her husband wasn’t what he appeared to be but didn’t elaborate.

Alexander Weah was born in Liberia and came to the United States sometime before 2013, Malika Weah said. He had two sisters, a brother and a stepbrother, and his biological mother still lives in Liberia, she said. He had been working as a warehouse manager in Charlotte.

An arrest warrant levying charges of femicide was issued in the case of Shanquella Robinson, ABC News reported late Wednesday, citing a prosecutor in Mexico. The name of the suspect who is said to be “the direct aggressor” has not been released, both ABC News and WSOC, The Charlotte Observer’s news partner reported. The FBI field office in Charlotte — which has an open investigation — would ...

A woman has been charged with embezzling nearly $50,000 from the Winston-Salem Federal Credit Union, where she worked for 28 years, Winston-Sa…

Jamarus Raynard Crews, one of three men who died in a shooting on Attucks Street on Saturday, was charged in 1992 with first-degree murder in …

A Winston-Salem man was shot and killed Friday in the city's southeastern section, authorities said.

Three men were shot to death Saturday morning in the 1600 block of Attucks Street in northeastern Winston-Salem, authorities said.

A Winston-Salem man was shot and wounded Friday night in the city’s southwestern section, authorities said.

When the suspects' vehicle accelerated and attempted to flee in the direction of two Kernersville police officers, one officer fired his weapon. No one was injured, officials said in a news release.

A Winston-Salem man was shot and wounded Friday night when someone in a vehicle fired a gun into a home in the city’s northeastern section, au…

One dead, two injured in three shootings in Winston-Salem.

Winston-Salem police are investigating three separate shootings that happened Friday, including one that left a man dead.

Law enforcement officials investigate the scene where Alexander Dekontee Weah was fatally shot at the Speedway on Lewisville-Clemmons Road on Aug. 5.

Forsyth County sheriff’s deputies stand outside the Speedway on Lewisville-Clemmons Road after the fatal shooting.