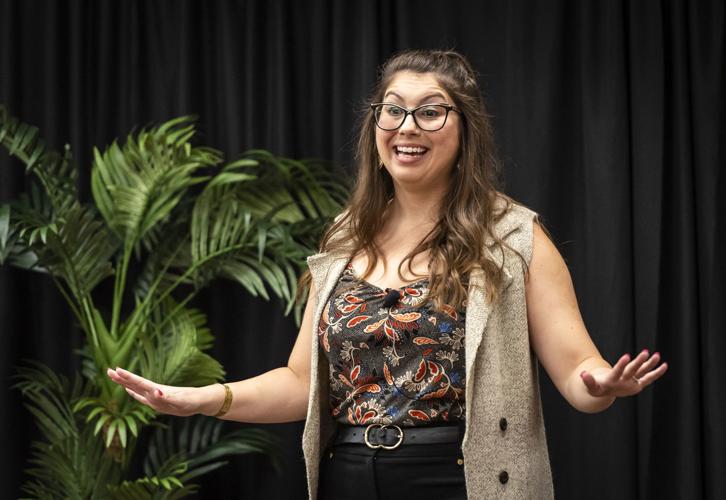 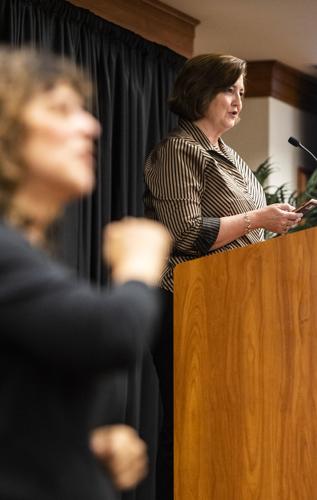 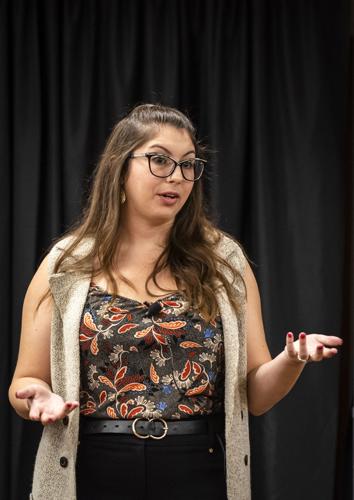 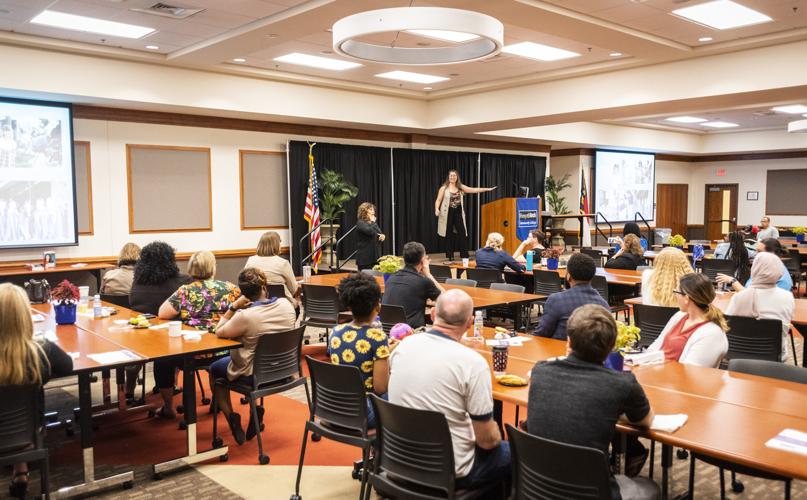 About 40 people listened Amanda McDonough share her life story as a deaf actress.

Speaking to a room of 40 people, Amanda McDonough’s voice rises and falls — sometimes seeming like it’s beyond her control — as she tells her story. McDonough is completely deaf.

Speaking to a group of faculty, staff and students Thursday at Forsyth Technical Community College as part of the school’s celebration of Disability Awareness Month, McDonough, 29, detailed her childhood experiences after being diagnosed with progressive hearing loss, and her life after becoming deaf in her senior year of college.

Starting from the beginning, McDonough condensed what was virtually her entire life story into an hourlong talk where she detailed how she went from living in denial about her hearing loss, to her struggles after becoming deaf to how she’s now an aspiring actor working to bring visibility of hearing-impaired people to the big screen.

She was first diagnosed with hearing loss at 4 years old, and said as a young child she chose to live in denial of her condition.

“I didn’t like this new version of me, I just wanted to be Amanda,” McDonough said. “I spent a good portion of my childhood pretending I was fine.”

Every six months after her diagnosis, McDonough said her parents took her to the doctors to get her hearing tested. Each test her hearing got worse, but still she pretended everything was normal even though she strained to hear.

Then, during her senior year of college in California, she got sick, and when she woke up one morning, her hearing was gone. Because she lived her life up to that point in denial, she never learned sign-language or how to lip read. In the hospital following her total hearing loss, nurses hung a whiteboard around her neck so she could communicate.

After spending days hiding from the world, McDonough said she became determined to pick her life back up, starting with teaching herself how to lip read.

“How do you communicate in a world that’s not made for you,” she remembers asking herself.

For hours on end, she would watch the TV newscasters’ mouths, trying to discern what they were saying. Eventually, she could. Now she can “read lips from across the room.”

McDonough went back to school and her university provided her with a court reporter that transcribed all of her lectures for her she said, enabling her to graduate with two degrees.

As she looked for work post-graduation, she said employers didn’t want to hire her because of her disability. Growing up in Los Angeles, she always had an interest in acting, and saw a TV show on ABC Family that featured deaf performers.

“I thought it was the most amazing thing ever, I wanted to cry,” McDonough said about seeing the deaf performers.

The rest is history. McDonough eventually landed a small role on the show, and has appeared in commercials, short films and other bit parts on TV. She’s also authored her own book, “Ready To Be Heard,” a retelling of her life story.

FTCC will continue to celebrate disabled persons’ successes and educate its students about people with disabilities throughout October.

A 21-year-old man died following a chase with a sheriff’s deputy and subsequent wreck on Friday night, according to the Forsyth County Sheriff…

Winston-Salem man accused of murder in crash that killed a Triad educator is a no-show in court.

A Winston-Salem man didn’t show up Monday for his murder trial in the death of a Triad educator, and a Forsyth County judge has issued an orde…

Winston-Salem man convicted of killing woman he had dated.

The attorney for a Winston-Salem man accused of shooting to death a woman he had dated, then hiding her body in a ditch on High Point Road in …

Atrium Health completes merger with Chicago health system. What does that mean for Wake Forest Baptist?

Demolishment of house in Old Salem begs the question: What's worth saving?

House in Old Salem gets razed over objections from preservationists with different ideas.

A Winston-Salem woman died Saturday after her vehicle ran off the road and collided with a utility pole, authorities said.

Wells Fargo branches in both Winston-Salem and Greensboro were hit by robbers on Thursday.

About 40 people listened Amanda McDonough share her life story as a deaf actress. 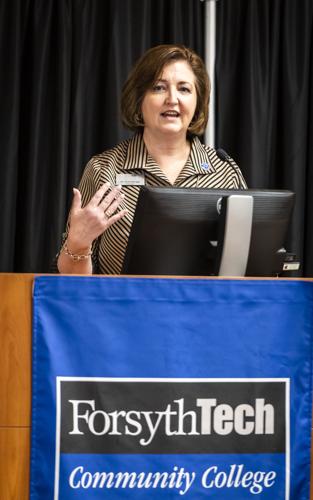