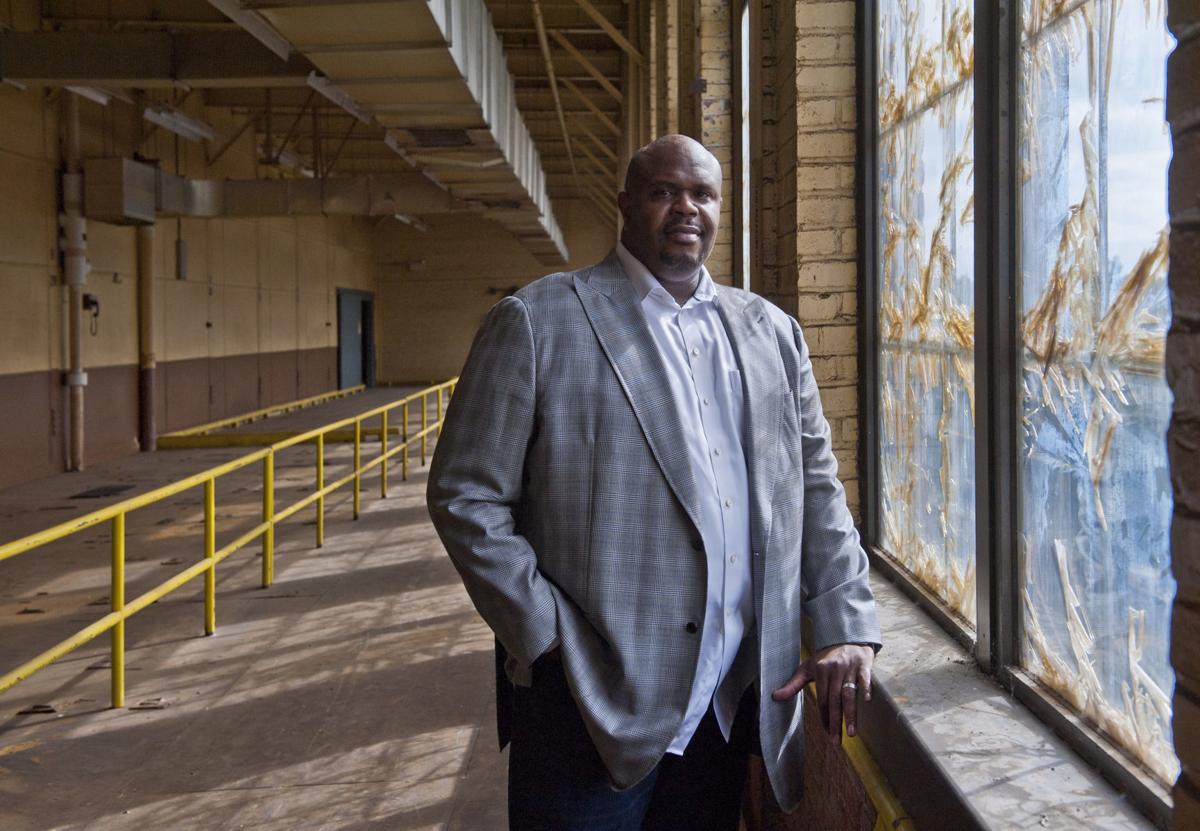 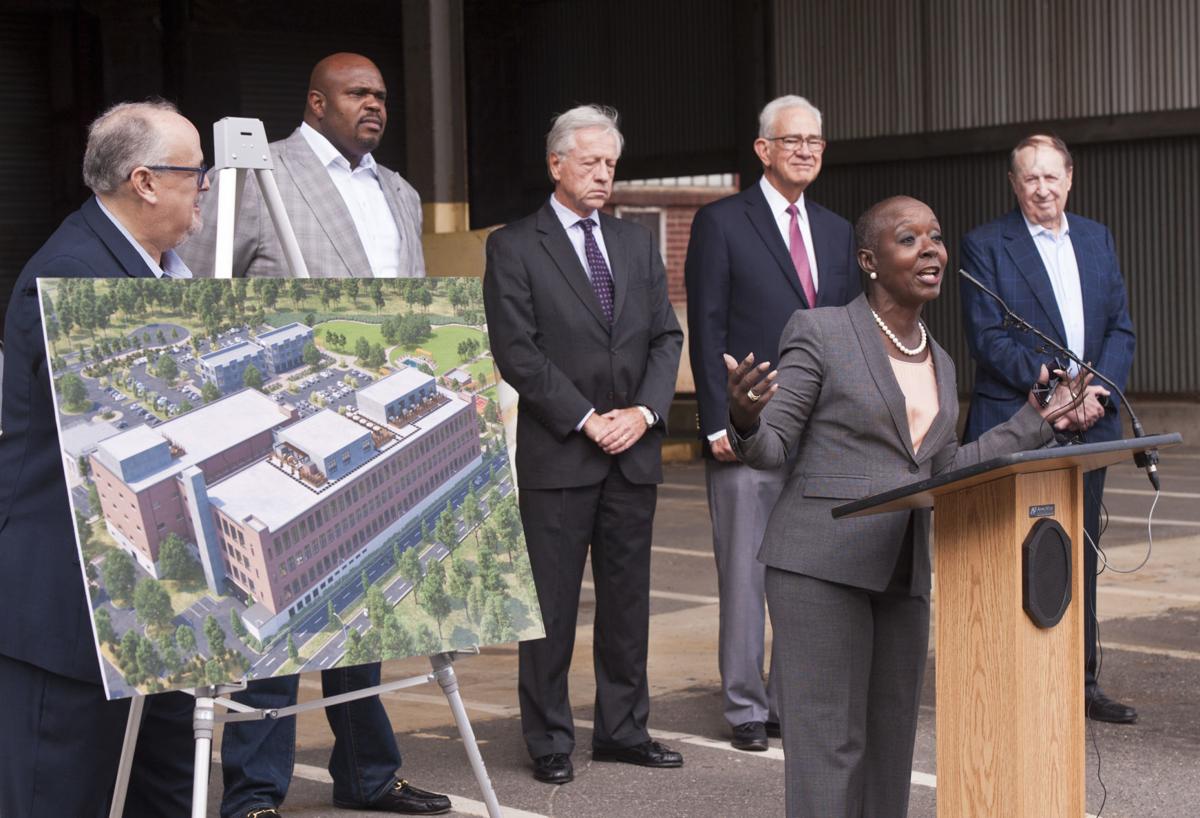 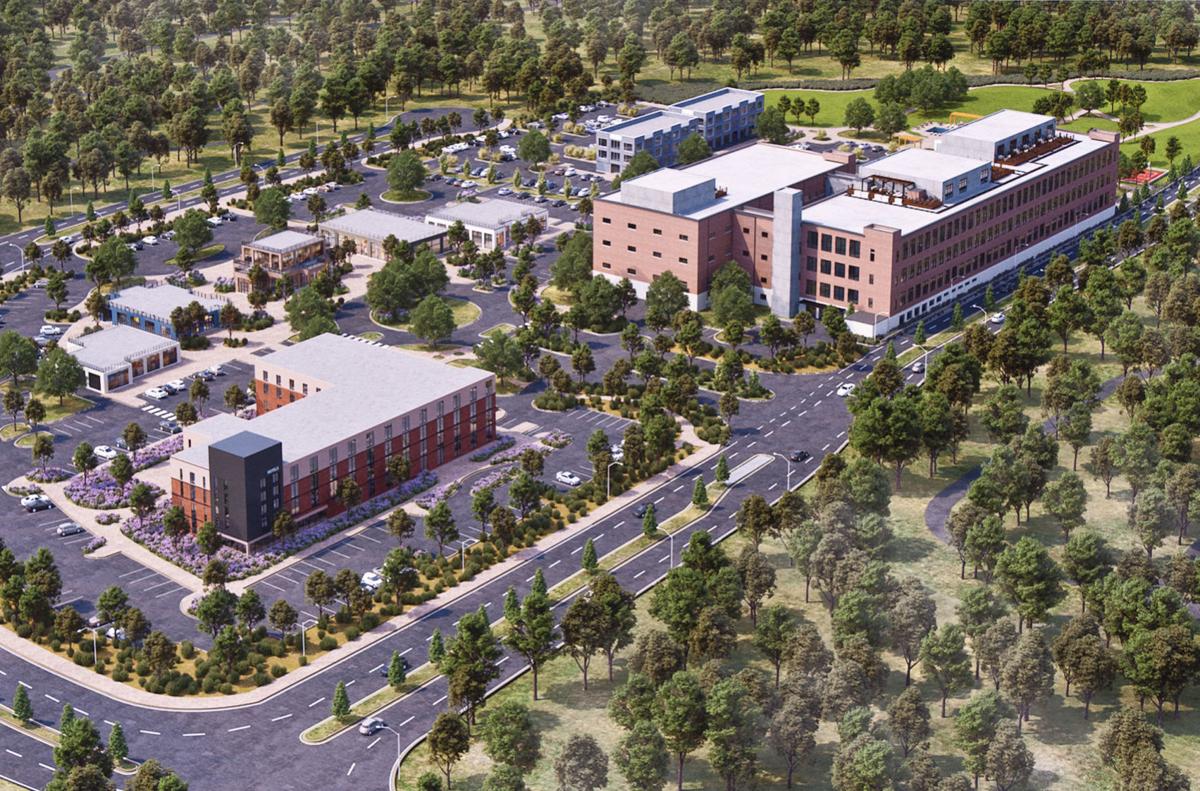 An artist’s rendering of the planned development at Whitaker Park. 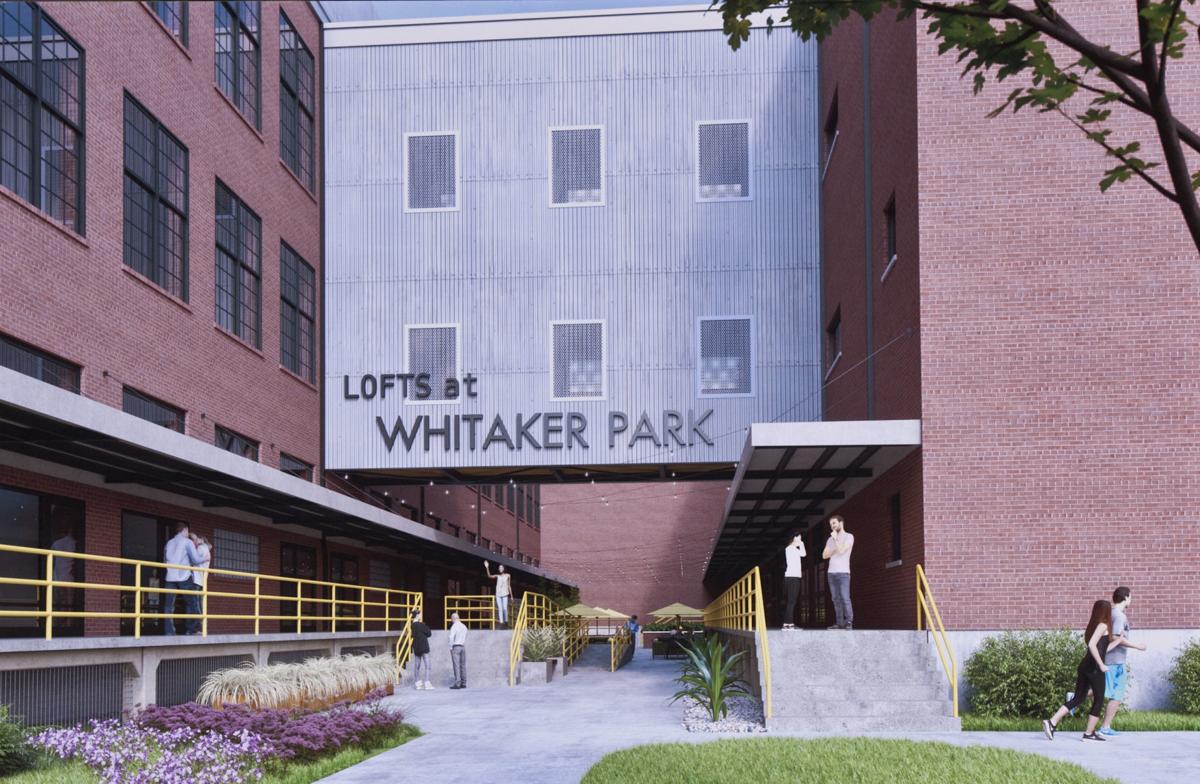 An artist’s rendering of the planned development at Whitaker Park. The first phase by C.A. Harrison Cos. LLC features 164 loft apartments in the historic former R.J. Reynolds Tobacco Co. buildings at 951 Reynolds Blvd. 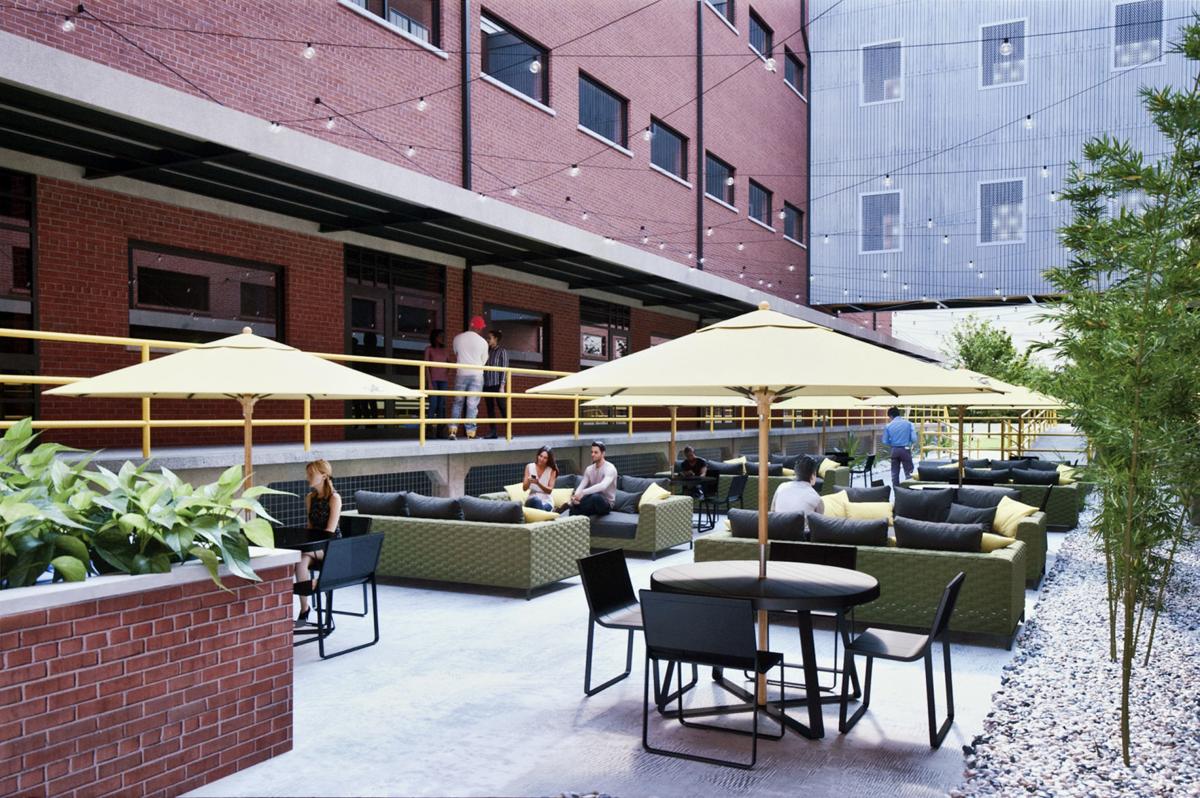 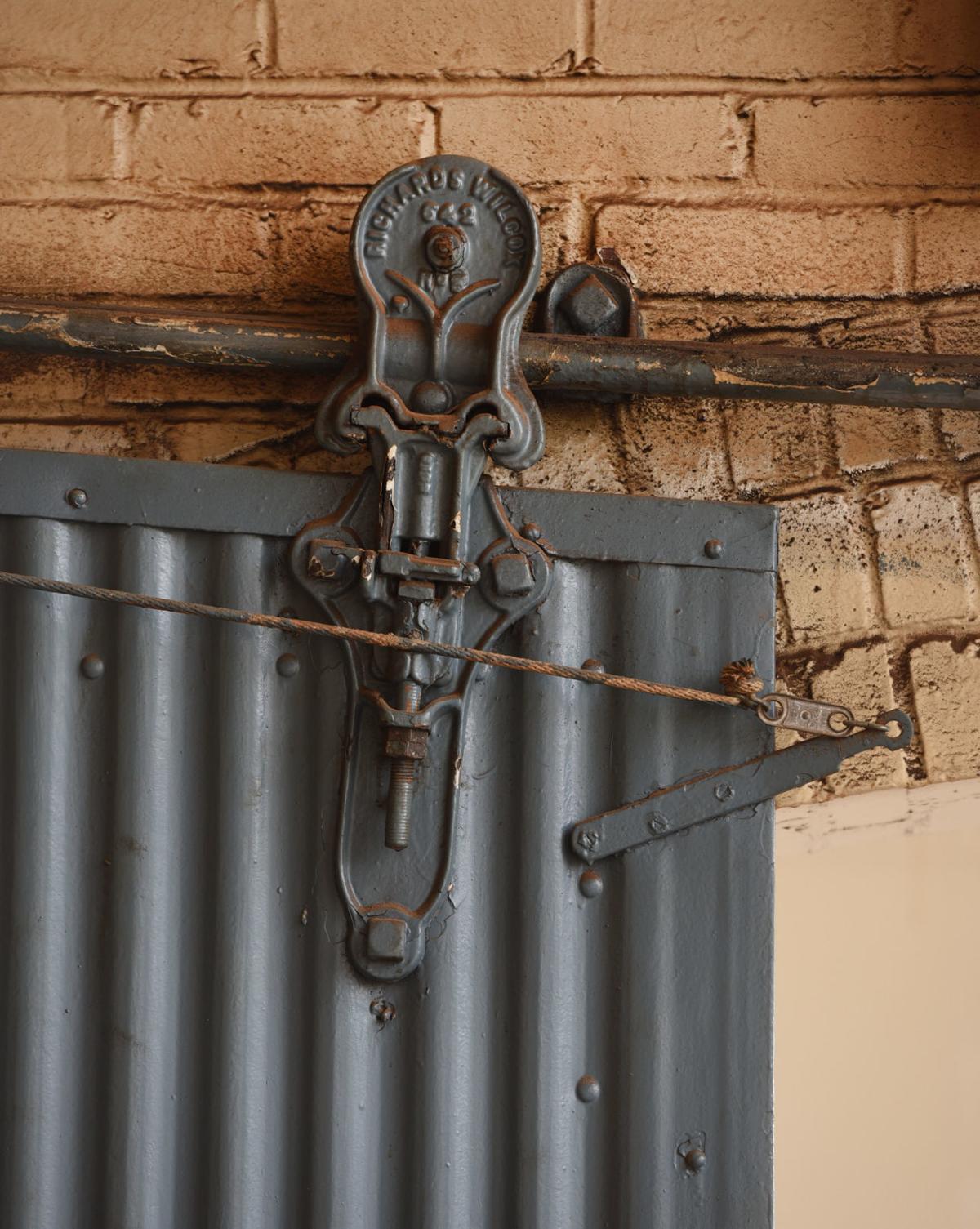 The details of a sliding door in Whitaker Park Building 2-1 seen during a tour of the buildings Oct. 10. 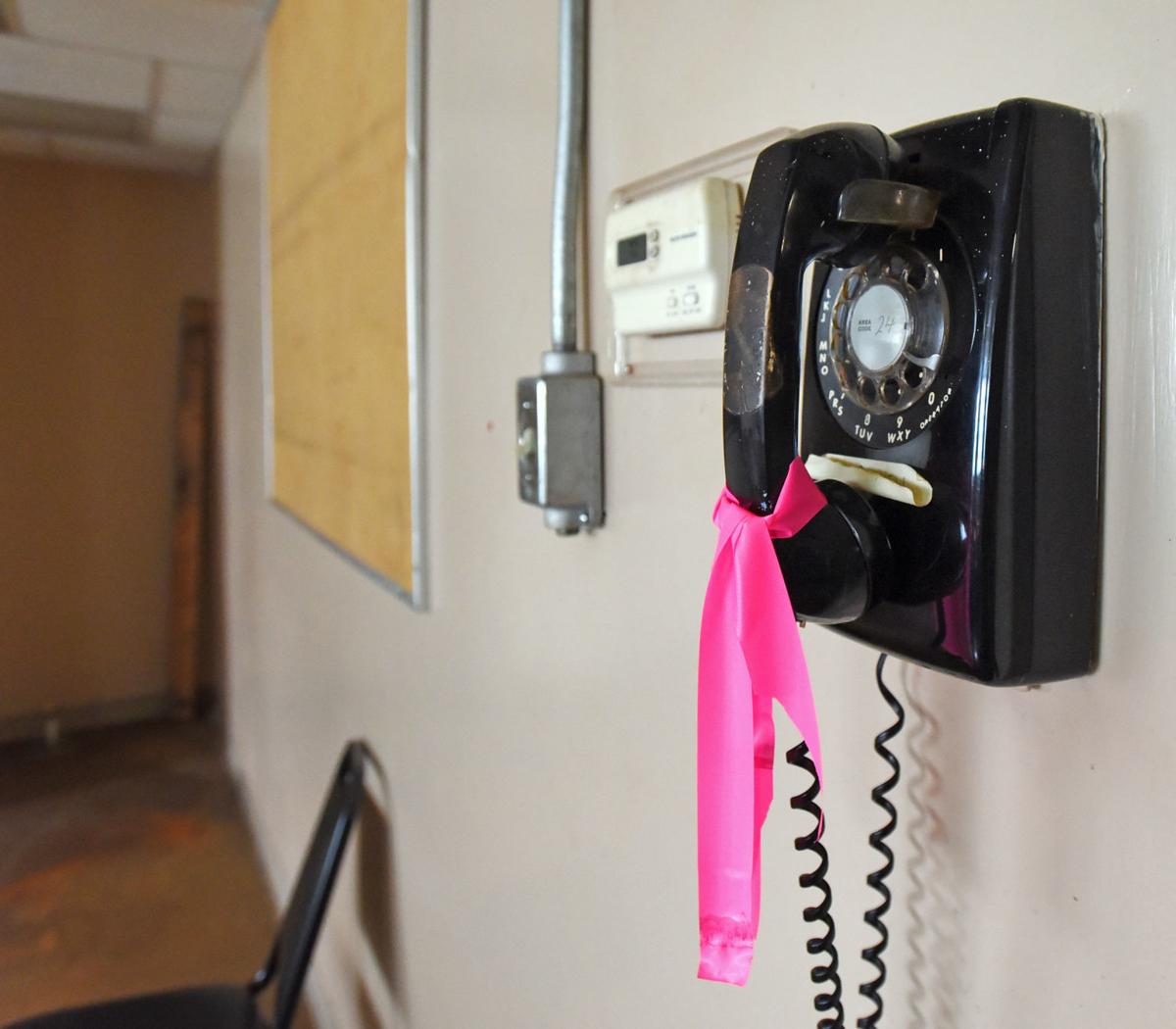 A black corded telephone is marked with flagging tape as an item of historical significance and something to be kept in the renovations of Whitaker Park Buildings 2-1 and 2-2 during a tour of the buildings, Thursday, Oct. 10, 2019. Whitaker Park Development Authority and real-estate developer Chris Harrison will renovate Whitaker Park Buildings 2-1 and 2-2 into 164 loft apartments. The former R.J. Reynolds manufacturing plant will be part of a larger redevelopment of the park. (Walt Unks/Winston-Salem Journal) 20190111w_nws_whitaker 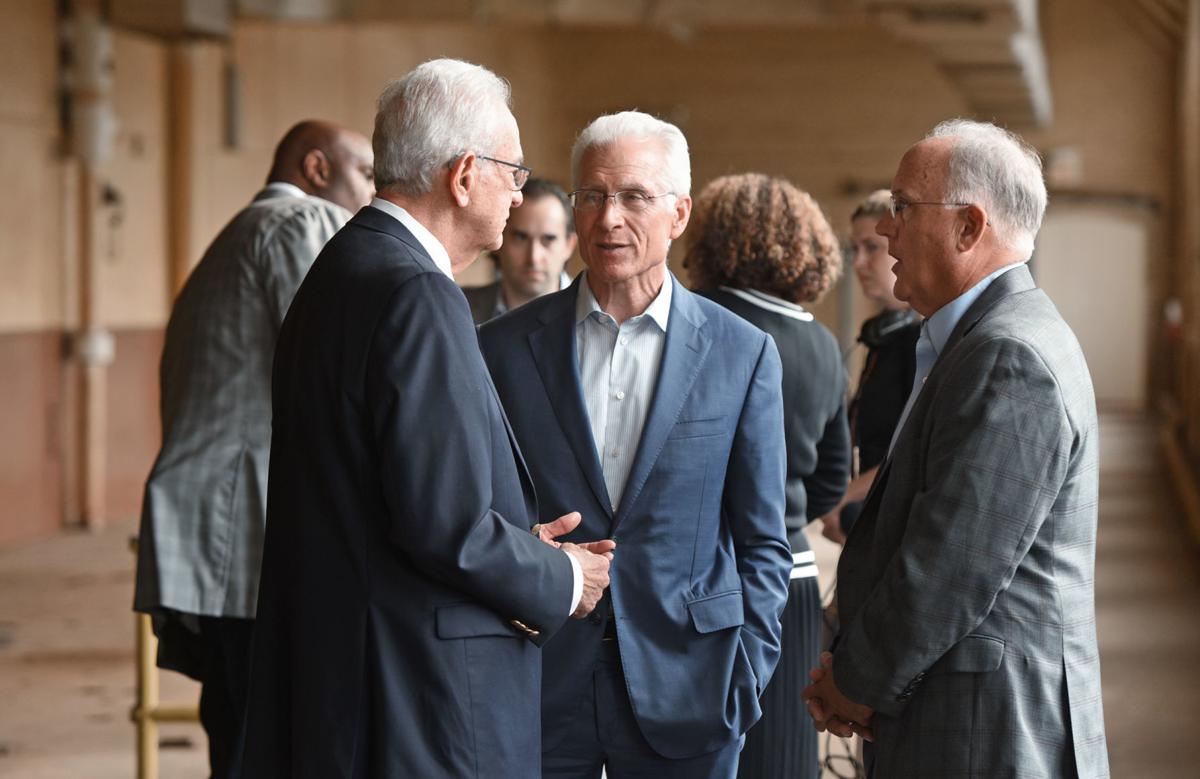 The Winston-Salem city councilwoman, standing in front of the historic Buildings 2-1 and 2-2 on the massive former manufacturing campus, told developer Chris Harrison on Oct. 10 that he would not have to worry about disturbing the neighbors with construction noise.

The neighbors, in this instance, are those buried in Woodland cemetery located across Reynolds Boulevard.

However, other neighbors in the surrounding North Ward communities were top of mind for Adams, Harrison and other local civic and elected officials attending the announcement of Harrison’s plans for an ambitious multi-use campus.

The first phase by C.A. Harrison Cos. LLC features the creation of 164 loft apartments in the historic former R.J. Reynolds Tobacco Co. buildings at 951 Reynolds Blvd. The goal is to begin renovation by March 31 and have the units available by late 2020.

When including new-construction plans for 25,000-square-feet of retail space, a 125-room hotel and another 150 residential units, Harrison projects an overall project cost of between $80 million and $100 million. He hopes to have the entire project completed by the end of 2023.

The project, as well as the successful Plant 64 and its 243 apartment units in downtown Winston-Salem, are at the heart of why Harrison formed his firm in 1998.

His focus, through good economic times and the Great Recession of 2008-11 that affected his business and personal finances, has been on commercial and residential real-estate development, often in neighborhoods that have been neglected.

Harrison expressed confidence that his piece of the Whitaker Park revitalization puzzle will spur residential, hotel and other service-industry jobs, making the local community more attractive for investment.

“It can be a conundrum because you want the economic development to happen,” Harrison said.

“You also want the people who have been through the recent ups and downs around Whitaker Park to benefit from the upturn we’re planning.

“We have faith that these projects, over time, will offer steady, good-paying jobs filled by folks from the local neighborhoods,” Harrison said. “We are working to land a grocery store because there is a food desert here.”

Harrison, along with local civic and elected officials, acknowledges that his piece of the Whitaker Park revitalization initiative will be more of a four-year marathon than a sprint.

Adams and Harrison expressed confidence the overall effort will represent more of an in-addition-to approach to economic development, rather than disturbing the surrounding neighborhoods through a displacement version of gentrification.

One dictionary definition of gentrification is “the process of renovating and improving a house or district so that it conforms to middle-class taste.”

Another definition is “a process of changing the character of a neighborhood through the influx of more affluent residents and businesses.”

Displacement, meanwhile, typically is defined as “when people are forced to leave the place where they normally live.”

Adams said she is hopeful that any gentrification from Whitaker Park revitalization will not lead to displacement in the ward.

The planned loft apartments would be situated on the Whitaker Park campus where there is no residential housing.

One goal is attracting some of the 650 Cook Medical employees who will be working down the street from the lofts once the company completes in 2022 the renovation of an 850,000-square-foot facility into a medical-devices manufacturing plant.

Adams said the Whitaker Park area “used to be a benchmark for Winston-Salem” before R.J. Reynolds Tobacco Co. began de-emphasizing it in favor of its 2-million-square-foot plant in Tobaccoville.

“We’re glad to have Chris and his firm pledging to bring it back to prominence even though we know it won’t return to its former glory” of having more than 2,000 employees at the plant, many of whom lived in surrounding neighborhoods and shopped and dined at local establishments.

Adams said her role on the Whitaker Park Development Authority board of directors is one of adviser and conscience.

Adams said she has been in Harrison’s ear ever since he began expressing interest in 2015 in another major residential project to Bob Leak Jr., president of Winston-Salem Business Inc., and Don Flow, owner of Flow Automotive Cos. and chairman of the Whitaker Park authority.

“I want this project to lift up without tearing up the community fabric of the North Ward,” Adams said.

One example is Adams’ concern about how Whitaker Park revitalization could affect the local community is the plans to split Indiana Avenue and Reynolds Boulevard into separate sections to give better access to the campus.

The plan involves extending Akron Drive from U.S. 52 to the west so that it crosses a Norfolk Southern railroad track and connects to Shorefair Drive at Reynolds Boulevard.

The new road would pass through Whitaker Park and open land for development and jobs, with Harrison’s project a potential major beneficiary.

A traffic study is recommending the closure of a rail crossing just south of the proposed road, at the junction of Indiana Avenue and Reynolds Boulevard. The railroad won’t allow the new Akron crossing without closing another one, officials say.

“We have got to consider the citizens that live in that community, the ones of us who go down Indiana every day and who come up to Reynolds Boulevard,” Adams said.

Nothing will happen, though, until the public has had a chance to provide feedback to the city, said Damon Dequenne, assistant city manager.

Even so, Adams said the project would not be built “until the citizens are satisfied on how the logistics will be.”

Harrison spoke of how gentrification and displacement affected the middle-class Washington, D.C., Petworth neighborhood where he grew up before he earned a football scholarship to the University of Virginia.

After graduating with a bachelor’s degree from the McIntire School of Commerce and earning a master’s in education degree, he played four years with the NFL’s Detroit Lions and Baltimore Ravens.

Upon retiring from the Ravens in 1999, Harrison transitioned to his real-estate company.

“I have a hard time with gentrification,” Harrison said. “From the time I left to go to college to when I returned, things had changed so much in the neighborhood in which I grew up.

More than 38% of District residents, including 35% of low-income residents, live in Census tracts — geographic areas smaller than Zip codes that contain a few thousand residents — that are growing economically.

But low-income people who live in those areas are at the greatest risk of displacement, the report says. That included the Petworth community where Harrison grew up.

In portions of the Kingman Park and Capitol Hill neighborhoods, nearly 75% of the low-income populations have vanished, Census information shows. Most of the people pushed out of these economic hot spots are black and low-income.

Harrison’s awareness of gentrification led him to commit to making at least 20% of the Whitaker Park housing units affordable to working people — a key to gaining support from Adams and other local elected officials.

He is hopeful that many of the residents living in the affordable housing units will be employed by businesses situated on his piece of the Whitaker Park campus.

Harrison’s pledge follows a 30% affordable housing commitment made by Grubb Properties to gain city and county funding support for its planned 244-unit complex next to the 500 West Fifth Tower in downtown.

Grubb officials said in July the building would be torn down by year’s end to make way for the apartments. The goal is to have the first units available in the third quarter of 2021 and construction completed in the first quarter of 2022.

City officials say the median usually hovers around the $40,500 mark. A rent considered affordable for someone making 90% of that amount would be a little more than $910 per month.

Another affordable-housing commitment was made by the developers of the Mill 800 complex at the former Chatham Manufacturing Co. textile plant at 800 Chatham Road.

The first phase has been successful, with the bulk of the 170 one- to three-bedroom apartments in the Mill 800 complex occupied. Monthly rents range from $800 to about $1,500.

Promoted by the Trump administration as part of the 2017 federal tax-cut initiative, the goal with opportunity zones is connecting low-income census tracts with investors and offering tax credits and other tax incentives to get investors involved.

Bob Leak Jr., president of Winston-Salem Business, said that “there have been some general inquiry conversations” about local opportunity zone census tracts.

“It certainly could work on the (Whitaker Park) project,” Leak said.

Also listed as census tracts are two directly to the south of Whitaker Park in the Boston-Thurmond neighborhood, which is experiencing its own fledgling revitalization effort through the Purpose Built Communities initiative.

The goal is improving housing, education and health in the community.

Winston-Salem Business and the Carolina Core economic-recruitment groups describe Boston-Thurmond as “one of the city’s oldest African-American neighborhoods and ... the target of a major redevelopment effort. The neighborhood is proximate to downtown and borders a commercial area that has recently experienced significant revitalization and private investment.”

Organizers with the Purpose Built Communities initiative say it may be years before the effort bears full fruit. They say the effort will be resident-led, with an organization formed through Wake Forest University playing a supporting role.

It’s the second time around for an effort that caused an outcry of protest from people who lived at Plaza Apartments in late 2017.

That’s when they learned that an organization formed from Wake Forest, the Boston-Thurmond Innovation Network (BTIN), wanted to buy and tear down their complex and replace it with mixed-income housing.

Leak said that “I believe Chris’ projects will be a big catalyst for Whitaker Park.”

“Companies considering locating there want to have amenities, such as restaurants and hotels, close by for employees and guests. I think the entire area will benefit from his plans.”

Harrison said he believes his project “will pull in a whole different demographic to the area, meaning a downtown feel to a suburban area.”

“These are much more sound buildings than Plant 64 was when we started, so there’s reason for optimism about the tremendous upside we see here” Harrison said.

Adams said Harrison has shown “he knows the importance of affordable housing to a neighborhood you are hoping to help be on the rise.”

“This project can be a blueprint for how you do an economic development project with diversity and inclusiveness in Winston-Salem.”

An artist’s rendering of the planned development at Whitaker Park.

An artist’s rendering of the planned development at Whitaker Park. The first phase by C.A. Harrison Cos. LLC features 164 loft apartments in the historic former R.J. Reynolds Tobacco Co. buildings at 951 Reynolds Blvd.

The details of a sliding door in Whitaker Park Building 2-1 seen during a tour of the buildings Oct. 10.

A black corded telephone is marked with flagging tape as an item of historical significance and something to be kept in the renovations of Whitaker Park Buildings 2-1 and 2-2 during a tour of the buildings, Thursday, Oct. 10, 2019. Whitaker Park Development Authority and real-estate developer Chris Harrison will renovate Whitaker Park Buildings 2-1 and 2-2 into 164 loft apartments. The former R.J. Reynolds manufacturing plant will be part of a larger redevelopment of the park. (Walt Unks/Winston-Salem Journal) 20190111w_nws_whitaker