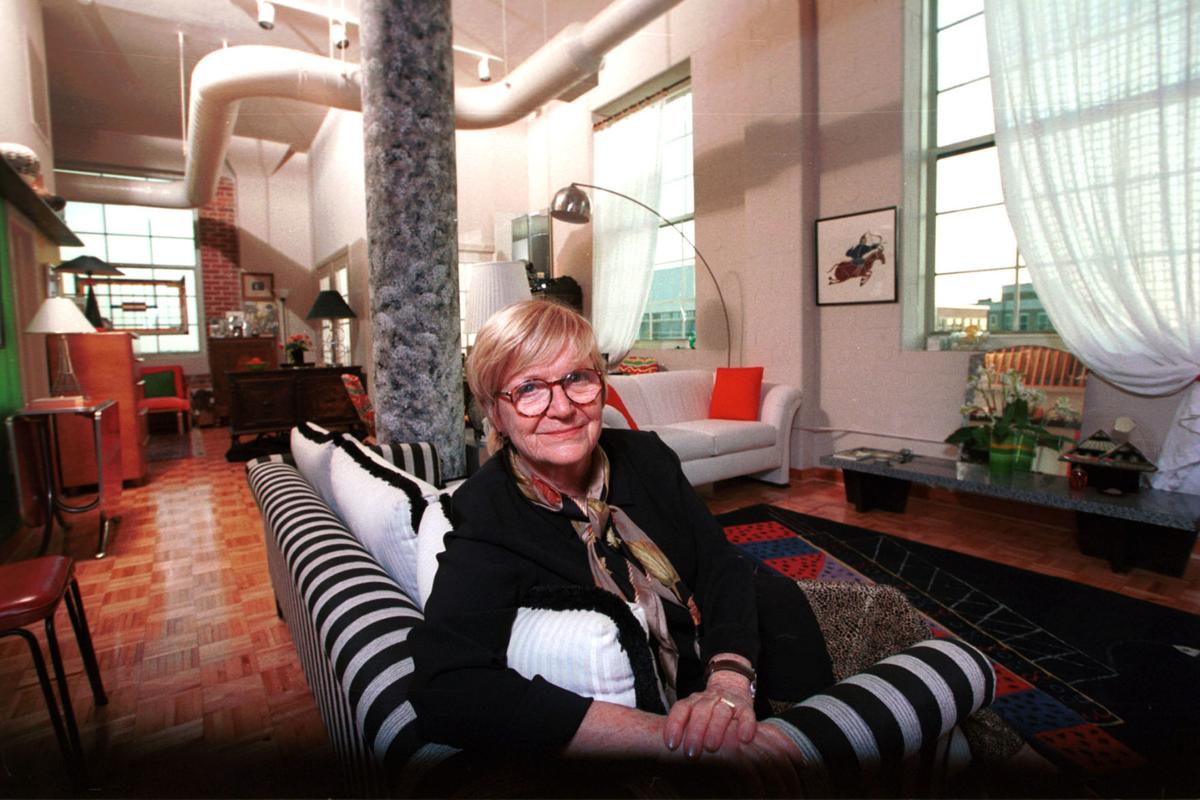 Dudley Shearburn is seen here in her Albert Hall apartment that was featured in a downtown architectural tour in 2000. 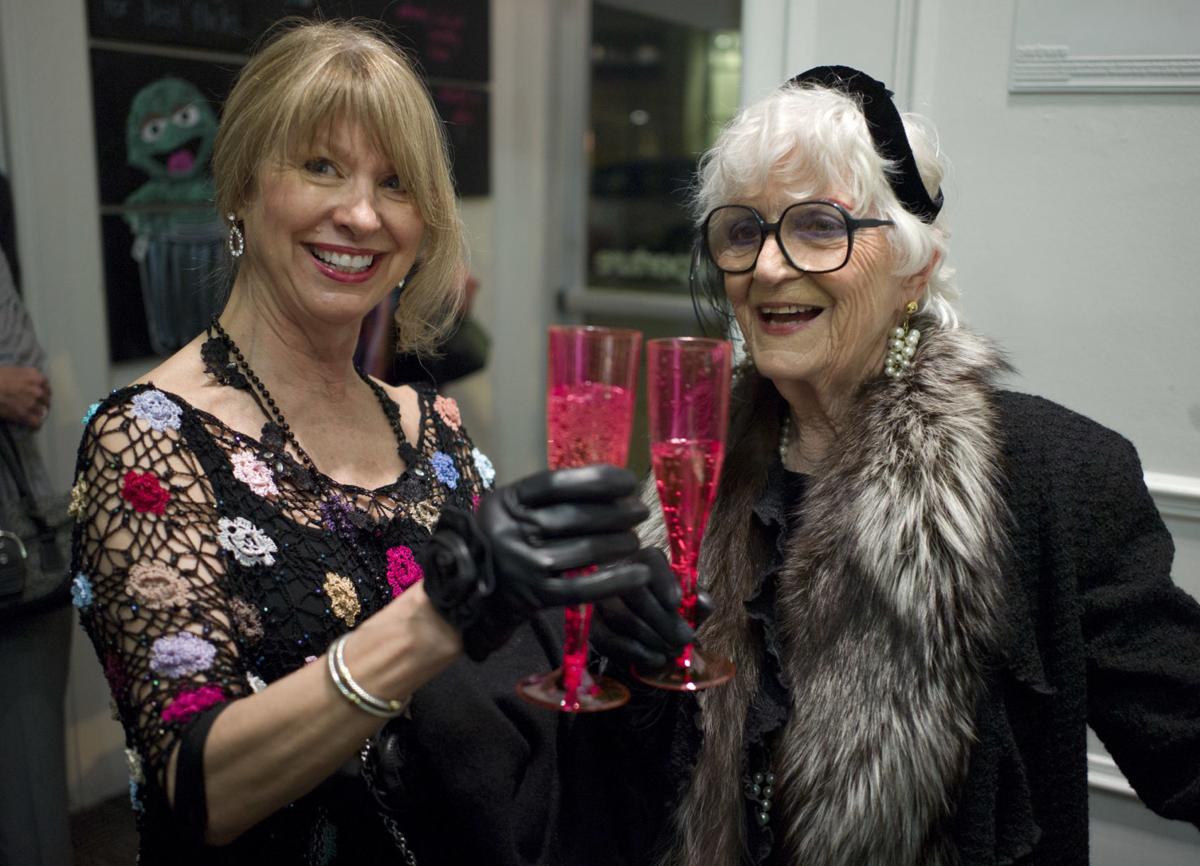 Byah McGee (a former Winston-Salem Journal copyeditor), left, and Dudley Shearburn are dressed in 1920s style for the Oscar Night party at Aperture Cinema in downtown Winston-Salem in 2012.

A mother of seven, world traveler, author and educator, she died Friday at 91 of natural causes in St. Louis, the city where she began her family and received her doctorate from the University of St. Louis.

Shearburn came to Salem College and Academy in 1977 to direct the Orton Center, an endowed center in the Department of Education that focused on special education curricula. When the Orton Center closed, she remained on the faculty and taught Women's Studies. She was instrumental in creating the Adult Degree Program and mentored countless students.

"Dudley. ... and my wonderful sister Mary decamped to St. Louis. ... our homeplace. She lived independently at Aberdeen Heights, an Arbor Acres-style facility," he said.

Brice Shearburn described having Dudley as a mother as a "completely fulfilling experience."

"She met each of her kids where they needed to be met," he said. "She provided so much by way of opportunity, constantly enrolling us in classes - French at St. Louis University, art appreciation at our fine and free Art Museum in St. Louis. ... she encouraged all manner of collaboration. Within the family, she was the glue."

Brice said that the family were stalwarts in the Catholic parish until Dudley was "summarily denied comity" when she and the children's father divorced. He was Catholic. She was from a Protestant family.

While in Winston-Salem, Shearburn moved into Albert Hall on Chestnut Street, one of the first historic tobacco mill buildings converted into lofts. There, she survived what has been described as the biggest fire in the city's history.

While the fire raged, Dudley and her friends decamped to the Piedmont Club, then atop the BB&T Building, to watch the spectacle, Brice said.

Frequent moves during her childhood, plus one set of grandparents who were wealthy and one set who sometimes didn't have working utilities, had given her the gift of adaptation, and she quickly found her footing among the Winston-Salem's lovers of books, food and good company.

"Her passion for curating friends is the most wonderful aspect in many ways," Brice Shearburn said.

She presided over a book club for 20 years. When she left Winston-Salem, one of the members, David Hough, a lawyer, wrote a guest column in the Winston-Salem Journal: "As adults, we were reintroduced through the good graces of Dudley to the works of Twain, Joyce, Tolstoy, Proust, Steinbeck ... Allende, Neruda, Esquivel and hundreds of other fine masters. ... We received a sophisticated college education without the tuition, testing and ennui. We discussed and argued and persuaded and discoursed. Electricity flew through the air."

"She was very much in charge, but they had a wonderful time."

Wilson, herself the author of books of poetry and biography, drew Shearburn's first book out of her in 1999.

"Everybody was always telling her that she should write a book," Wilson said. "And she would say, 'I'm a talker, not a writer.'"

So Shearburn sat cross-legged on Wilson's guest-room bed and dictated "Get a Good Life" as Wilson typed it into her new computer.

The book is mainly about family life with its joys and sorrows, growing up in Birmingham, Alabama; living in St. Louis and raising seven children on her own. The book sold 1,000 copies and had a second printing when orders started coming in for more.

"She talked, and I typed, and we drank coffee," Wilson said. "She always told stories as if you were hearing them for the first time. She was hilarious.

"She was generous and kind to everybody. ... She was the first feminist in Winston-Salem as far as I knew. ... There was nobody like her."

The advice in her books ranges from how to correct fashion mistakes - if your skirt's too short, stand in the back - to how to feed and bathe children at the same time.

Shearburn and Wilson wrote a second book in 2006, "Life's a Trip," about Shearburn's many travels. On her first trip outside the U.S., in 1977, Shearburn took her entire household to Mexico. By 2006, Shearburn had taken 87 trips abroad. She saw Dame Judy Dench perform in Shakespeare in England and fire dancers cavort on hot coals in Northern Greece.

While she was in graduate school, needing a break from studies and domesticity, she talked her way into a solo camping trip in a national park, claiming she was bringing a troop of Cub Scouts. To get to the park, she rode her bicycle from St. Louis and slept in a pup tent.

Brice Shaerburn described his favorite family trip: "The family migration to a remote summer cabin in Wyoming that Dudley rented sight-unseen from an ad in Atlantic Monthly - and coordinated a parade of fellow travelers to descend in waves."

Emily Shearburn, who lives in New York, is one of Dudley Shearburn's 12 grandchildren. She posted on her Facebook page: "My Grandma Dudley was the strongest woman I’ve ever met. I’m so grateful for the memories I have with her - Thanksgiving dinners at the Ritz, visits to her stylish Winston-Salem loft, eating Greek yogurt parfaits in London. Hope they have endless issues of the New York Times and Bushmills Black Bush in heaven, Grandma."

"She lived a brilliant long life and left on her own terms, in her homes with her passions – art, books, cashmere - and her children," Brice Shearburn said. "Dudley was a force and well loved."

Friends have established an annual Dudley Shearburn Readers Prize that will award a local reader a gift certificate for Bookmarks independent book store.

Dudley Shearburn is seen here in her Albert Hall apartment that was featured in a downtown architectural tour in 2000.

Byah McGee (a former Winston-Salem Journal copyeditor), left, and Dudley Shearburn are dressed in 1920s style for the Oscar Night party at Aperture Cinema in downtown Winston-Salem in 2012.