There was no such thing as a summer break for the 65 students in the Summer Enrichment Musical Theatre Program.

Over the course of 12 days, students in the program hustled to learn what it takes to stage a 2½-hour musical — the dialogue, the lighting, the choreography, the music, the movements, the set design.

“We go from ‘Nice to meet you. Welcome to Summer Enrichment’ to ‘OK, it’s time to get on stage,’” said Amanda Nelson, a dance teacher who is in her 11th year with the program.

The result of all that cramming is “Elf The Musical,” which wraps up its three-day run Wednesday at Reynolds Auditorium on the campus of Reynolds High School. Showtime is 7 p.m.

The musical is based on the 2003 movie starring Will Ferrell.

Winston-Salem/Forsyth County Schools’ musical theatre program has been staging productions for 61 years, with many former campers going on to careers in theater.

“It’s huge,” Nelson said of the impact the program has on students. “I see all these kids who are grown up and are working in the industry and living their dreams out. They started here, and it was a little spark.”

This year’s performance is a return to normal, with a bigger cast performing without masks and a live orchestra, most of whom are students.

The musical was canceled in 2020 and scaled back last year because of COVID-19.

This year’s production is a delight, with big chorus line routines and swinging numbers that highlight the incredible range of the students, including Alex Knott (Buddy), Quinn Kinser (Emily) and Arizona Hall (Jovie).

For students, the camp is a chance to collaborate with students and teachers from across the district as well as tap into the expertise of professionals from the UNC School the Arts, who advise on set design.

“This camp has resources that individual schools might not have,” said Robert Johnston, an administrator with the Summer Enrichment Program. “We’re in one of the best auditoriums around, and from a technical side, there’s more you can do. It’s a really unique opportunity.”

This year’s musical theatre program was open to students in grades 6-12. They worked in all sorts of areas from acting to lighting to set design and sound.

With guidance from about 10 teachers from various schools and a handful of interns, the students were in camp from 8 a.m. to 4 p.m., Monday-Thursday. They had three weeks to learn the musical, a “tech week” on the stage of the historic auditorium and three days of performances, adding up to quite an exhaustive period during what is supposed to be a time of relaxation for many students.

Chadwick Holmes, a student at West Forsyth High School, said after Monday’s performance that the camp has taught him several lessons.

“It’s taught me to persevere and has given me something to commit to and a lot of confidence,” Holmes said.

C. Douglas Carter, after whom Carter Vocational High School is named, started the musical theatre program in 1960. Former campers include such folks as Michael Wilson, a playwright and director who has worked on Broadway.

In a story on the 50th anniversary of the musical theatre program, Wilson told the Winston-Salem Journal that the camp felt like a home.

“Without that program, I wouldn’t have developed the discipline and the awareness of the hard work that it takes to be a professional in the theater,” Wilson said. “It was like boot camp.”

More recent alumni include Shayne Maggard, who graduated from High Point University with degrees in theater and Spanish. A 2018 graduate of East Forsyth High School, Maggard had roles in three musicals and worked as an intern for another.

“It taught me how to learn a role quickly because you have such a short period of time,” said Maggard, who recently performed in “Bright Star” at the Kernersville Little Theatre.

Maggard was at Monday’s show to support her brother, Dane, who played Santa Claus; and Layne who played Sara.

“It’s crazy to see the younger kids I was with still doing the program,” Maggard said. “We all remember each other. It truly is a family.”

“There are people still in the program that I like to keep up with,” said Fus, a 2018 graduate of Reynolds High School. “I consider them my friends despite them being four or five years younger than me.”

Nelson said that around this time each year, former campers tap into her social media feeds, reminiscing about their experiences.

“She loves it. This is in her wheelhouse,” Philips said of her budding theater kid. “I’m not sure what we’re going to do when it’s over.”

PHOTOS: Step behind the scenes of local "Elf: The Musical" production

The cast of “Elf: The Musical” perform their opening number on Monday at Reynolds High School in Winston-Salem. The musical is the culmination of a five-week summer theatre enrichment program put on by Winston-Salem/Forsyth County Schools. 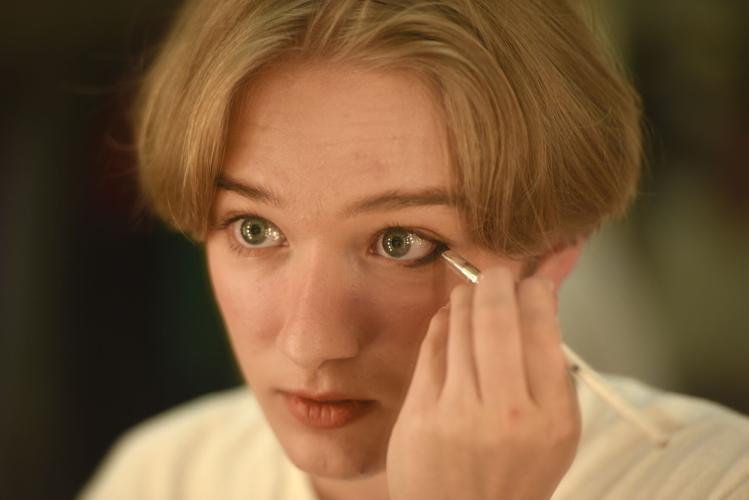 Maggie Brown, 16, applies eyeliner before performing in “Elf: The Musical” on opening night on Monday at Reynolds High School. 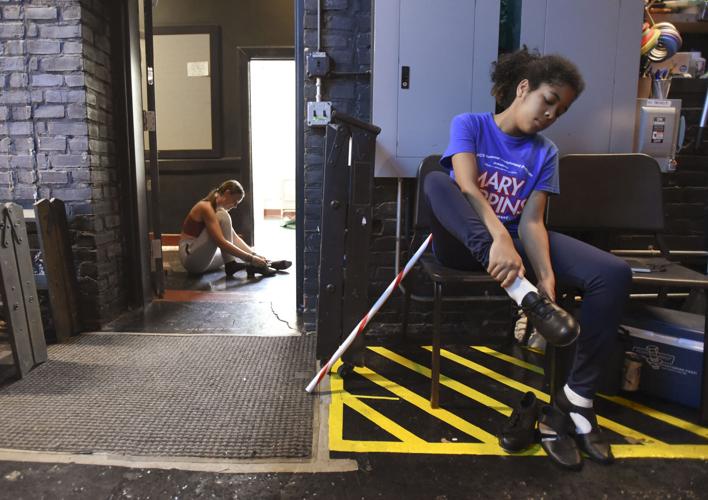 Chloe Howard, 15, puts on tap shoes during rehearsal for “Elf: The Musical” on July 13 at Reynolds. 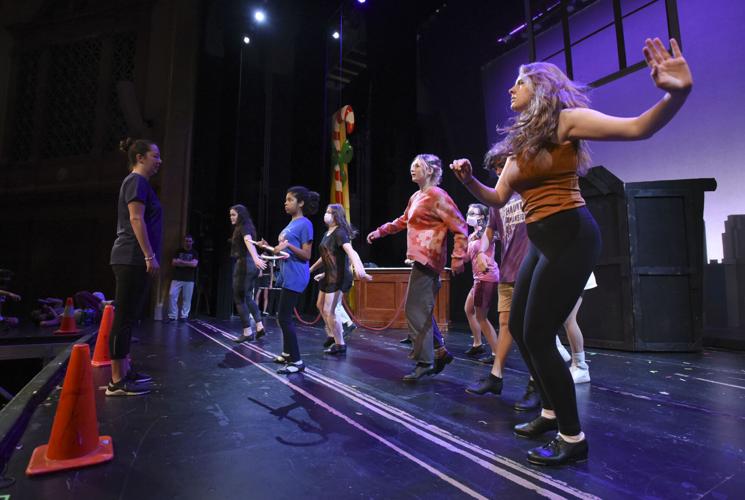 Amanda Nelson, left, watches as dancers perform a routine during rehearsal for "Elf: The Musical" on July 13. 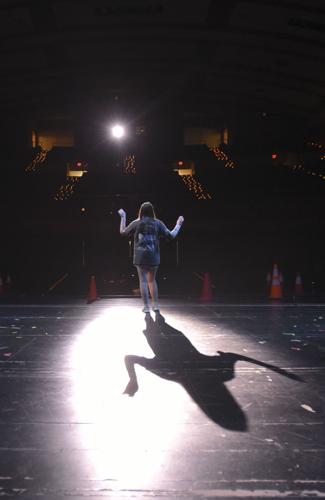 Arizona Hall, 18, performs as Jovie during "Elf: The Musical" rehearsal on July 13. 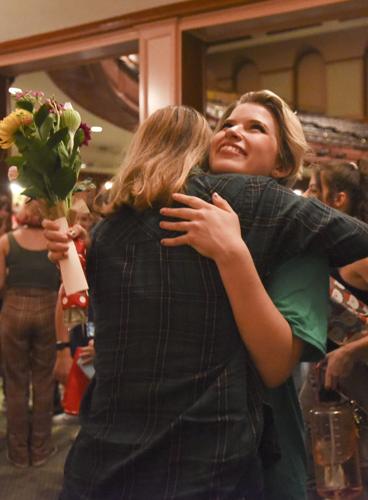 Quinn Kinser, 17, hugs someone after performing in "Elf: The Musical" on opening night on Monday, July 18, 2022 at Reynolds High School in Winston-Salem, N.C. Kinser played the role of Mrs. Hobbs in the production. Opening night marked the end of the five week summer theatre enrichment program hosted by Forsyth County Schools. 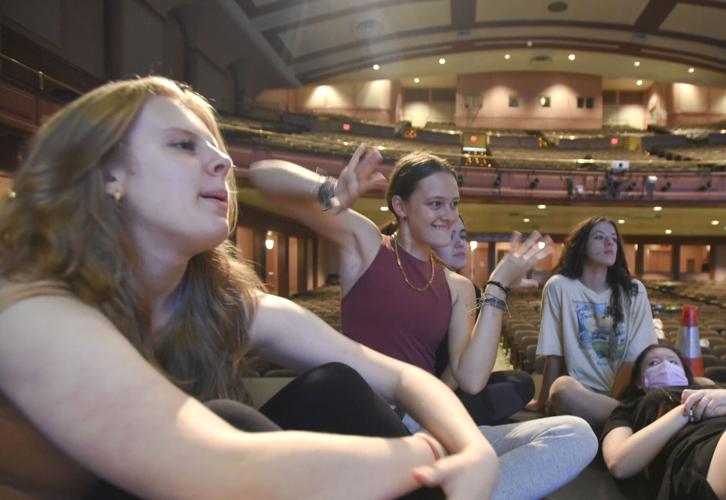 Parker Dishman, 16, center, waits for the next part of "Elf: The Musical" rehearsal on , July 13 at Reynolds High School.