Maria Gonzalez Garcia, a rising senior at North Forsyth High School, had never heard the word “viscosity” before this summer.

On Friday, she stood before a table in the lobby of Wake Downtown, using the learned language of a scientist, throwing such fancy terms as “stratified viscous fluid” and “fluid dynamics” as she explained what she had been up to over the last six weeks.

“This was getting me out of my comfort zone,” Maria said.

She was one of 12 students chosen to participate in a new six-week paid internship developed by Wake Forest University. The Lab Experiences: Academics and Professions program — or LEAP — gave local students with an interest in math and science a chance to conduct lab-based research alongside Wake Forest mentors, typically a faculty member and a graduate student.

At Friday’s symposium, students set up tables describing their research and answering questions, marking the end of the internship.

The Burroughs Wellcome Fund awarded Wake Forest a three-year grant for the program. It will expand over the next two years, from 12 this year to 18 next year and 24 in year three.

The goal is to find money to sustain the program after the grant expires, said Rebecca Alexander, the director of Wake Downtown and a chemistry professor at Wake Forest.

The internship is for students in Title 1 high schools in Winston-Salem/Forsyth County Schools. Title 1 schools are schools where more than 40% of the student body comes from low-income families.

“Many of us have hosted high school students in our labs,” said Alexander, “but they’ve usually been the children of friends of friends, and they tend to be students of privilege. We wanted to change that.”

Students with an interest in science, technology, engineering and math were identified at schools. Each were paid $1,800 to cover what the students could have earned at a summer job. The program also paid for meals and transportation for students who needed it.

They were matched with faculty members doing all kinds of research, some of it in the field. Angel Vargas Sanchez, a rising junior at North Forsyth, visited Pilot Mountain State Park as part of his research on why so many trees at the park fail to reach maturity. Aaliyah Hill, a rising senior at Kennedy High School, collected water samples in Salem Creek to study filtration methods.

As part of the internship, students had to interview professionals in their fields of interest. Maziel Valerrabano-Bernal, a rising junior at Kennedy, got to talk to astrophysicists at Harvard University. Maziel aspires to go to the Massachusetts Institute of Technology.

Maria, who wants to be a nurse, talked to several nurses and learned of different routes to go into the field, such as going first to community college then to a four-year college.

Students also had to practice public speaking in anticipation of their presentations and learn how use libraries to verify their research, said Alana James, the associate director of community engagement for Wake Downtown.

“The amount of confidence I’ve seen in them has grown times 10,” James said.

Some students are reconsidering what they want to study based on the internship. Aaliyah, for example, is now thinking about going into environmental law based on what she learned about pollutants in local waterways.

“I always wanted to be a lawyer or judge, but I’ve gotten a whole new outlook,” she said. “This has really opened my eyes.”

Fatima Pichataro Martinez, a rising senior at Parkland, has always been science-minded. She came to enjoy the weeks she spent in a lab studying the shape of cells.

“If you had asked me before, I would have said I wanted to be a nurse or nursing assistant, but now I’m thinking about biomedical engineer,” she said. “It’s like a door opened to a whole new career I could possibly do.” 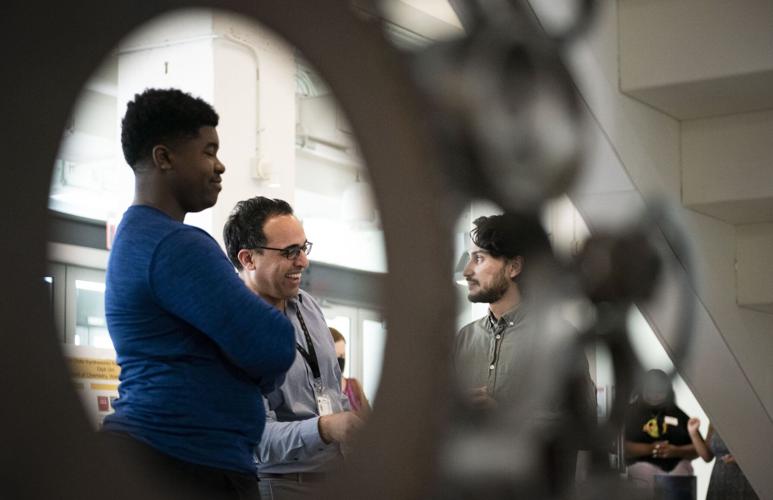 Trea Grier (from left), a senior at Carter High School, speaks with Saami Yazdani, an associate professor in the department of engineering at Wake Forest University, and Jaime Cardenas, a doctoral candidate at WFU, about his project during the WFU’s Lab Experiences: Academics and Professions (LEAP) program’s symposium on Friday at Wake Downtown in Winston-Salem. 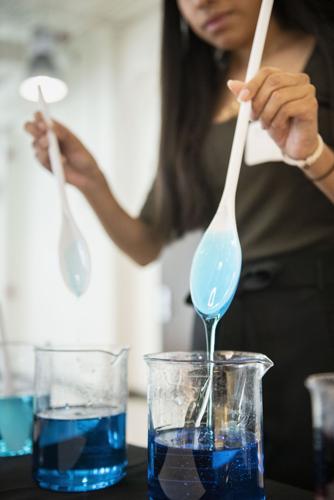 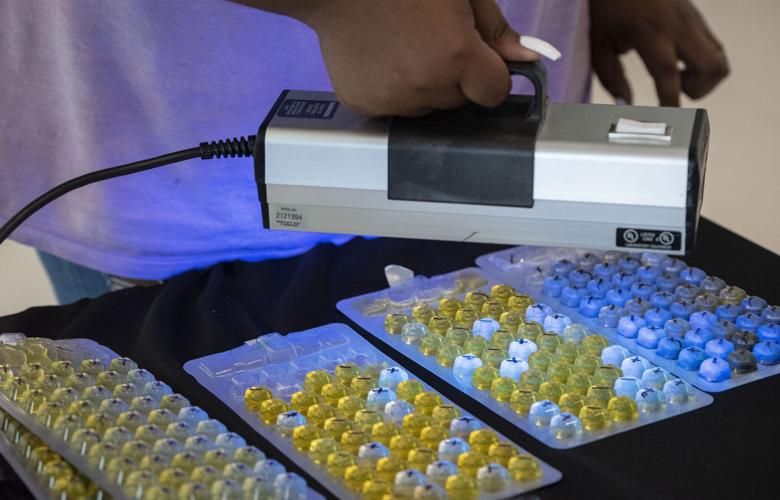 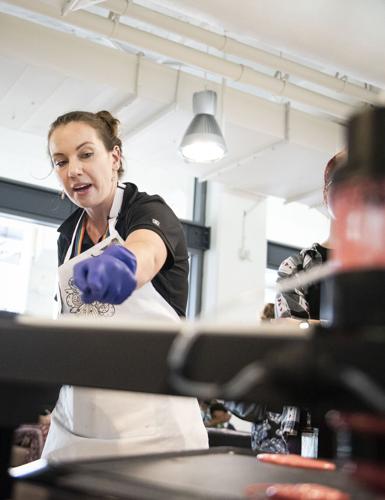 Erin Henslee, an assistant professor in the department of engineering at Wake Forest University, explains how her team programmed a PancakeBot to make different red blood cell shapes as an introduction to 3-D printing during the WFU’s Lab Experiences: Academics and Professions (LEAP) program’s symposium.