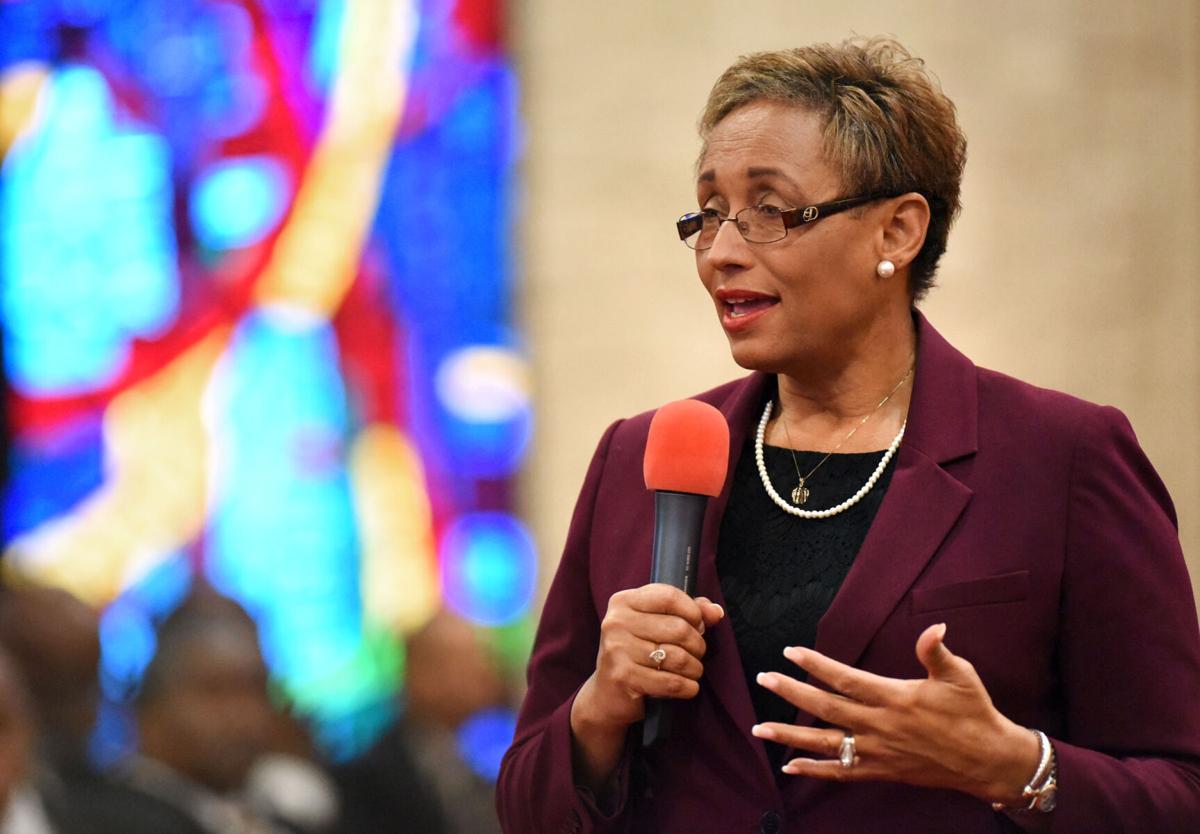 A few hours after her resignation was announced, she was introduced as the next superintendent of Danville (Va.) Public Schools at a meeting of the School Board of the City of Danville. Hairston was present at the meeting.

Her new position will be effective Dec. 1. The local district has not announced when Hairston will end her duties here.

The announcement of Hairston's resignation was made public minutes before the local school board met in an emergency meeting that was closed to the public to discuss personnel matters.

Hairston said in a statement that the position she accepted is "dear to my heart." She grew up in Danville and taught math in schools there in the early part of her career. Her husband Ronald Dean Hairston is on the city's police force.

"I want the talented staff and the amazing students and families of this district to hear the news from me, first. I want them to know that working in this community has been a truly rewarding experience and I've been grateful for the opportunity," Hairston's statement read.

She sent a similar message to the district's teachers and staff.

Hairston's tenure was marked by one of the most challenging education scenarios in recent history — the massive and sudden shift to online learning in mid-March, ordered by Gov. Roy Cooper to stem the spread of COVID-19. Within a few days, the district had passed out thousands of Chromebooks and internet Hot Spots and set up a meal-delivery system to feed thousands of students.

The district made one of the quickest pivots to online learning in the state.

Hairston was in the process of overseeing a return to what has been known as Plan B, which is a mix of remote and online learning, that is filled with logistical and budgeting challenges. After starting the school year fully remote, the board of education voted on Oct. 1 to begin the gradual return of students and staff for in-person instruction. The return of students began last week with Career Technical Education students and is scheduled to continue over the next weeks, stretching into January with the return of high school students.

Two days ago, the board voted to change the guidelines that would dictate when students would return. The moments leading to a vote for the change in guidelines were confusing, leading to some frustration among board members and people in the community.

Board chairperson Malishai Woodbury commended Hairston in a statement while acknowledging the difficulties in the weeks ahead.

"Our board has been through some difficult times in recent months, but I can assure you we will do what we think is best for students, best for staff and best for our community. We will begin working immediately to find someone who will take the reins of this difficult work and carry on. We can't stop, the learning must continue," she said in a statement.

Hairston's tenure as superintendent is among the shortest in recent memory. She started her job in September 2019, after a months-long search for a replacement for Beverly Emory. Hairston had been the superintendent for Richmond County Schools in Augusta, Ga., and has more than 30 years of experience in public education in Virginia and Georgia. She is the first African American and the second woman to head the local school system.

The pandemic dominated most of Hairston's tenure, leaving little time for some of the issues that she wanted to put at the forefront, such as equity.

A few of her most recent recommendations failed to pass a board vote, including merging Brunson and Cook elementary schools, and giving substantial raises to executives to make the district more competitive.

Hairston said at the time that some principals were making more than their superiors, making it difficult to recruit them for central office jobs.

The request was roundly criticized for its timing. Classified employees, among the district's lowest-paid employees, have been waiting for a new salary schedule for more than a year.

In August, Hairston talked about the weight of leading the district through the sudden shift to online learning in March to the start of the school year.

"I felt like we've been in crisis mode since March 14. We haven't had time to think about emotions, our feelings. If we did," she said, "we'd break down."

Hairston told staff members in an email that she will be on hand to oversee the transition process.

"In the coming days, more information will be coming out about next steps for district leadership. Please accept my sincere thanks and heartfelt gratitude for all that each and every one of you have done for our students during this very trying year," she said.

'We want to be the cutting edge': Salem College makes dramatic pivot to preparing all of its graduates to be leaders in health fields

The private college said it will be the nation's only liberal arts college focused on preparing women for leadership roles in health-related fields.

Nearly out of quarantine space, the Winston-Salem arts school said it might move some classes and performance activities online.

Winston-Salem State and N.C. A&T marching bands to be featured in new film

"National Battle of the Bands: A Salute to HBCU Marching Bands" will air Sunday on WXLV-TV.

The animal welfare group wants the university to investigate. Wake Forest said the experiment wasn't conducted at the medical school or by medical school researchers.

About 70 protesting students said the university's new quarantine policies are unfair to students who have tried to stay safe during the pandemic.

Its COVID-19 numbers are down, so Wake Forest eases campus restrictions

The $5 million grant comes from Gilead Sciences, which has developed antiviral drugs to treat the flu, hepatitis, HIV/AIDS and COVID-19.

Campus leaders say a 14-day campus lockdown could be next if the university's COVID-19 numbers don't come down.

Wake Forest clarifies campus restrictions after a spike in COVID-19 cases, and UNC-Chapel Hill threatens to punish students who gathered en masse after the win over Duke.