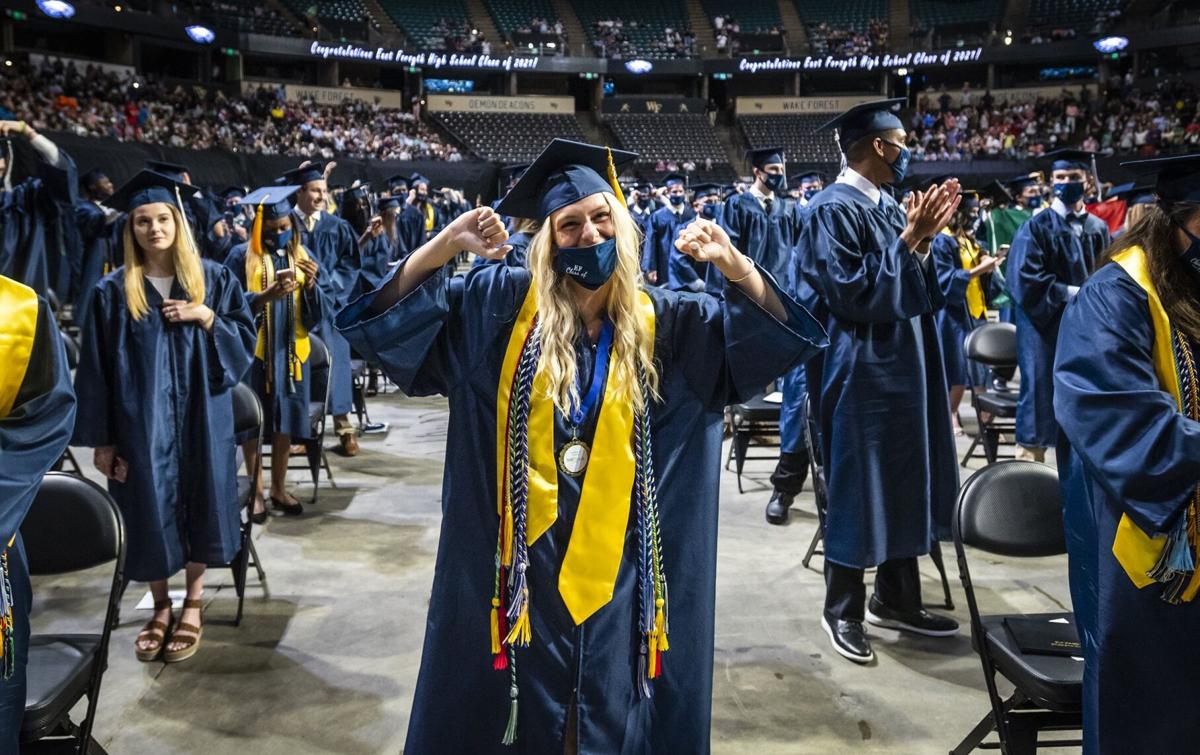 Chloe Angell, a member of the East Forsyth Class of 2021, celebrates at the end of graduation on Friday in Winston-Salem. 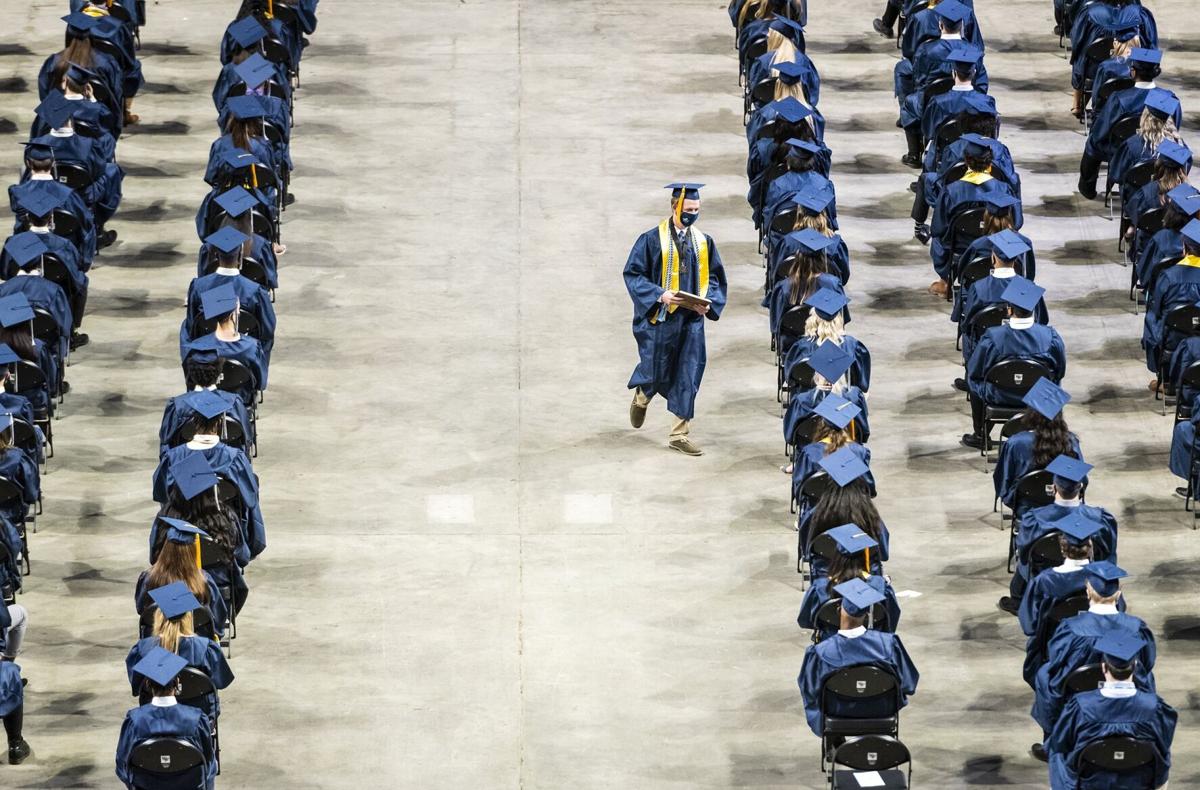 A member of the East Forsyth Class of 2021 returns to his socially distanced chair after receiving awards during graduation on Friday. 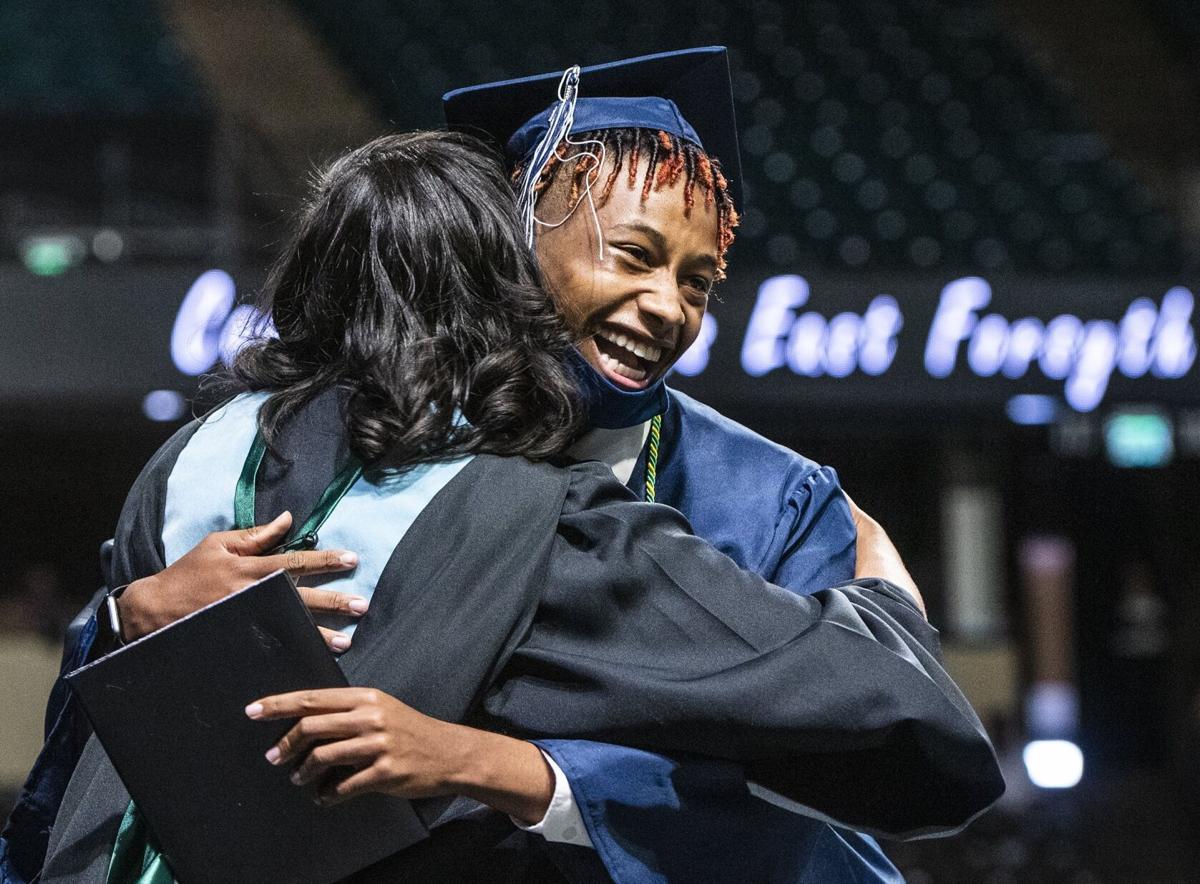 Brandon William Johnson, a member of the East Forsyth Class of 2021, receives a hug in addition to his diploma on Friday in Winston-Salem. 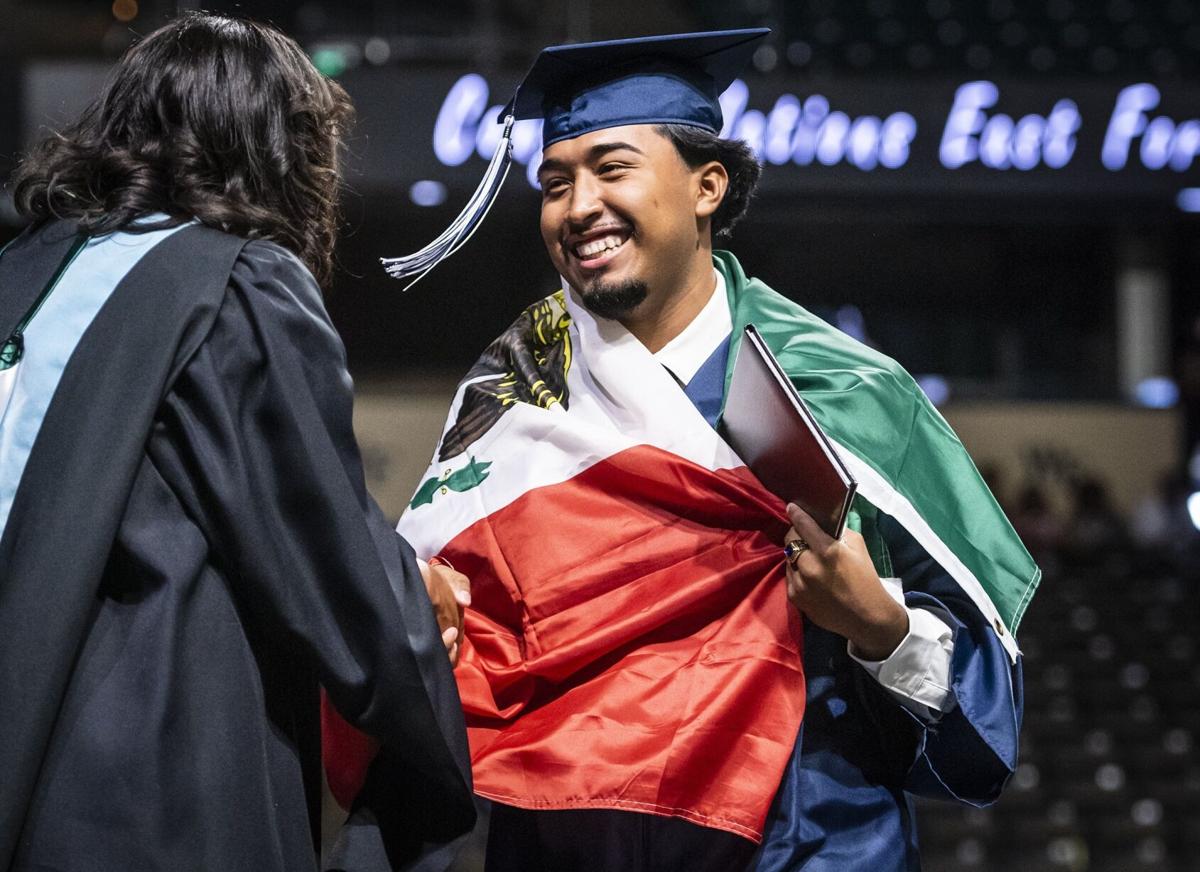 Steven Carmona-Chavez, a member of the East Forsyth Class of 2021, celebrates draped in the flag of Mexico after receiving his diploma.

East Forsyth High School seniors uncorked a year’s worth of emotion at its graduation ceremony on Friday.

They danced and cried and collectively shook their heads over a senior year that was nothing short of a long, strange trip.

“Senior year, where do I begin?” asked Konstantina Kortesis, the senior class vice president. She mentioned the isolation, the endless Zoom classes and ever-changing reopening plan.

“We adapted and overcame a crazy year by making the best of the situation,” Kortesis told about 430 of her classmates.

Rain in the forecast forced school officials to move the graduation from Truist Park to Joel Coliseum. East Forsyth’s graduation was the first of several scheduled for over the next six days. Six more schools will graduate this weekend.

All are scheduled to be outside, a safety precaution meant to mitigate the spread of COVID-19.

Many of the seniors at East Forsyth had not seen each other for months. High school students were allowed to return to their classrooms full time in late April, the last group of students to be given that choice.

Because it was so late in the year, lots of seniors decided to keep learning remotely.

Kayla Manning said she thought about her sister, Anaya McCalister, when she walked across the stage to get her diploma.

McCalister graduated last year and was not able to have a traditional graduation ceremony.

“This made me miss my senior year,” McCalister said.

Manning, who plans to study sports psychology at the University of South Carolina in the fall, said graduation took on extra meaning this year.

“It’s extra special because a lot of us didn’t think this would happen. This was important to me because my sister did not get a graduation. I was doing this for the both of us.”

Manning stayed in remote learning all year. She saw some of her classmates at a few events over the year but this was the first time the entire group had been together.

“It was cool seeing all of us together,” she said.

To keep on the crowd, each graduate was given six tickets. Manning gave one of hers to her grandmother, Delores Blackwell.

“This means everything to me,” said Blackwell, glowing as she heaped grandmotherly praise on Manning. “This was something a grandma could not miss.”

The class also paid tribute to Nicholas Thornton, who would have been a member of the class of 2021. Young Nicholas died in 2014 at the age of 11 while a fifth-grade student at Kernersville Elementary School.

A cap and gown was placed on the stage in his memory.

Looking back on the history of space exploration

Looking back on the history of space exploration

An Alexander County couple wanted in connection with the January shooting death of a furniture plant employee were arrested in Arizona on Tuesday, U.S. Marshal Deputy Commander Brian Alfano said.

Chloe Angell, a member of the East Forsyth Class of 2021, celebrates at the end of graduation on Friday in Winston-Salem.

A member of the East Forsyth Class of 2021 returns to his socially distanced chair after receiving awards during graduation on Friday.

Brandon William Johnson, a member of the East Forsyth Class of 2021, receives a hug in addition to his diploma on Friday in Winston-Salem.

Steven Carmona-Chavez, a member of the East Forsyth Class of 2021, celebrates draped in the flag of Mexico after receiving his diploma.