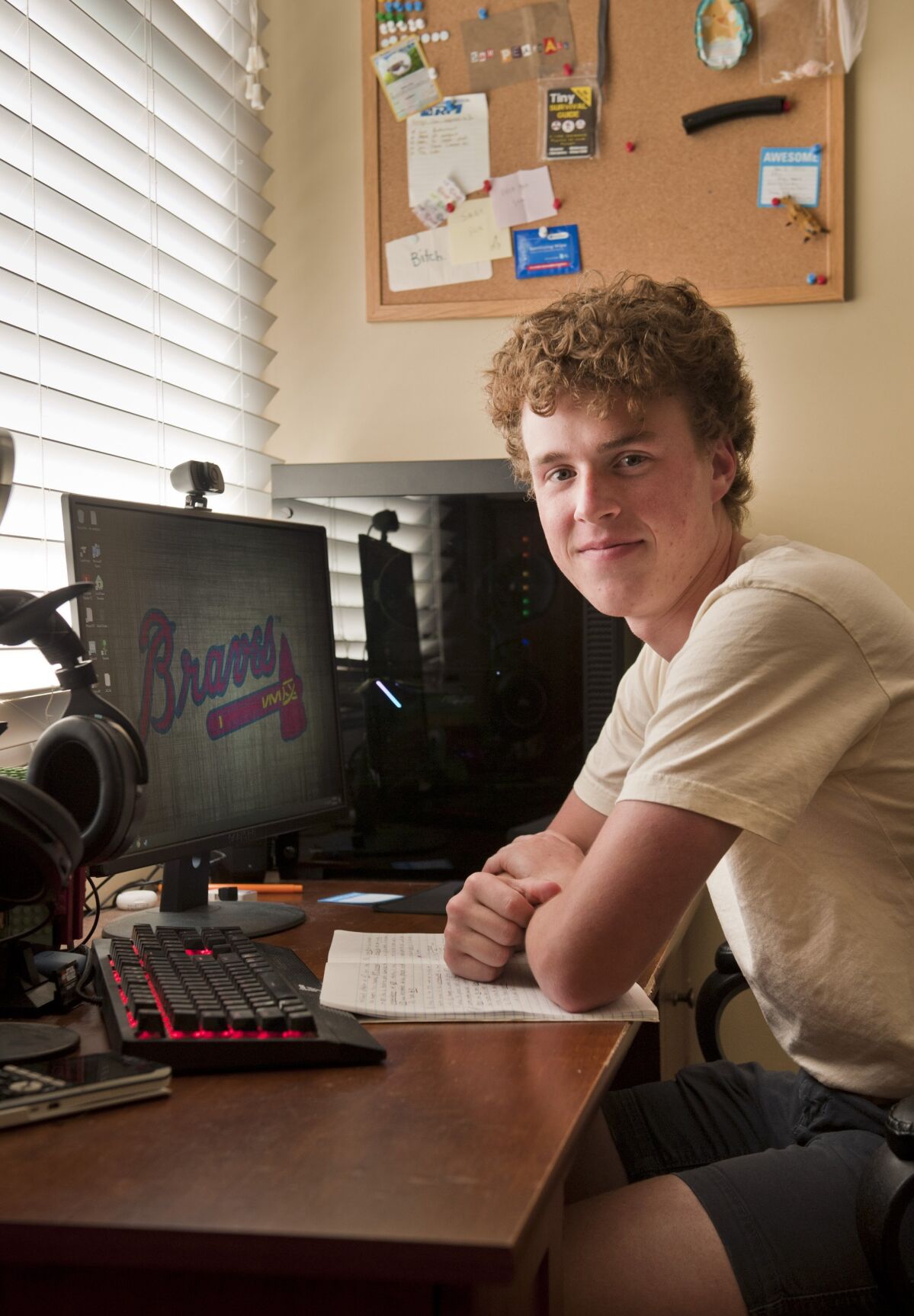 Reynolds High School senior Sam Pearsall sits at his home desk where he worked during the school year. While some students chose to return to in-person learning as COVID-19 restrictions were eased, Sam and his family felt it best to remain remote. 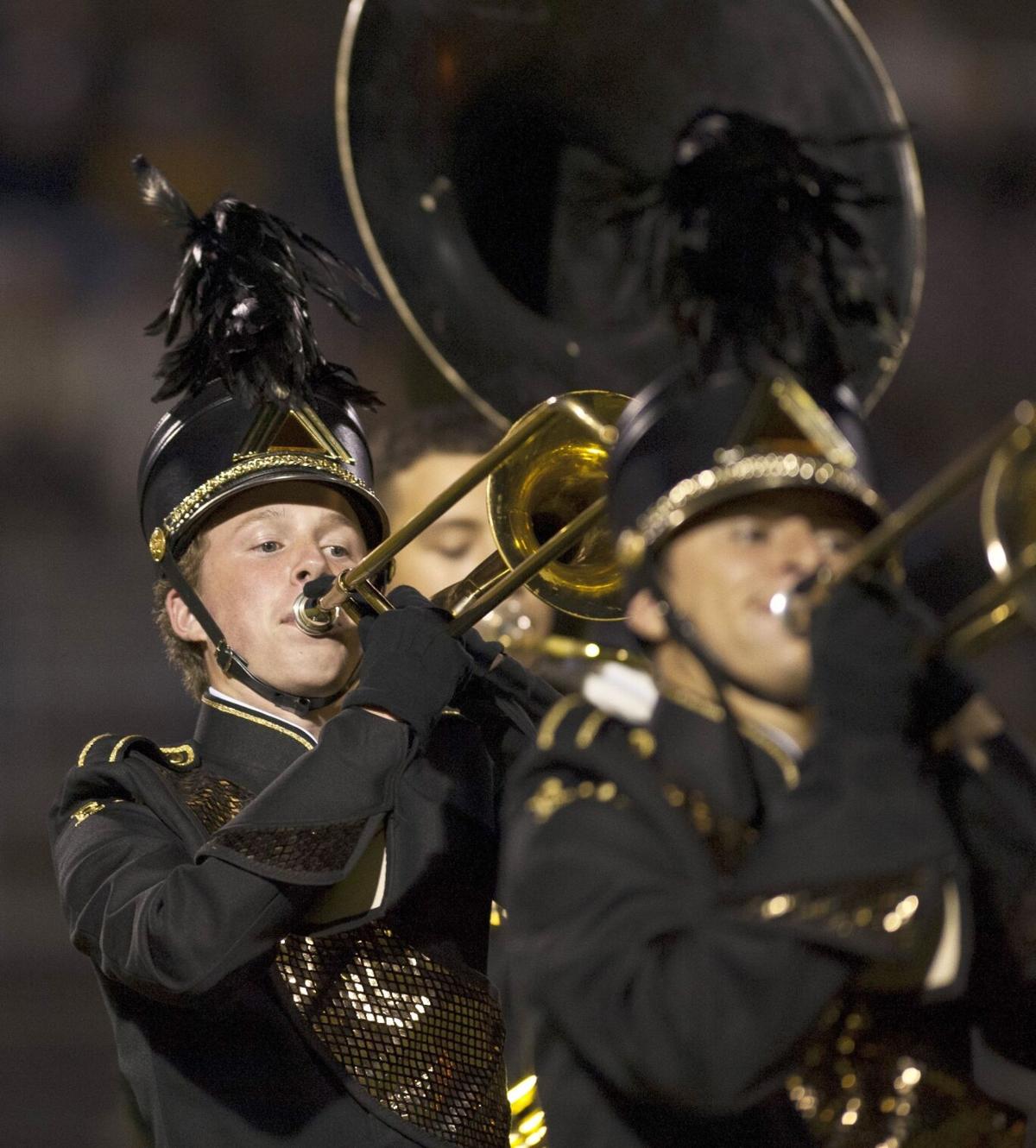 Reynolds High School's Sam Pearsall plays trombone with the Reynolds' marching band in October 2017 during his freshman year. Although the marching band was active during the modified football season in his senior year, they did not march because of COVID-19 restrictions. Sam said that in-person band class is one of the activities he missed being a remote student.

In-person graduation ceremonies will begin this coming weekend for most of the 4,000 seniors in Winston-Salem/Forsyth County Schools, restoring a time-honored tradition in the life of a student after last year’s ceremonies were pushed online.

Even with all the usual trimmings of commencement — the caps and gowns; the pomp and circumstance — in place, graduation will still feel a little different for seniors.

For one thing, the senior class at each school hasn’t been together since mid-March of 2020 when Gov. Roy Cooper abruptly closed public schools statewide to curb the spread of COVID-19.

“It’s going to be wild,” said Sam Pearsall, a student at Reynolds. “I’m sure I’m going to see a lot of people I forgot existed over the last year.”

Throughout high school, cohorts of students get used to seeing each other in classrooms, hallways and afterschool events. Not seeing her classmates has been hard for Breanna Wallace at East Forsyth.

“Graduation will be the emotional ordeal that it is every year but as far as not having seen people, it will feel more emotional in the sense that, ‘I’m just seeing you again and now you’re leaving.’ That will be difficult for me,” Wallace said. “I definitely feel like this graduation will be one I’ll remember for a very long time.”

Pearsall and Wallace both chose to finish their year online along with about 1,600 seniors. The other seniors were allowed to return to their schools four days a week beginning April 19. That gave those seniors about 20 days of face-to-face learning.

Superintendent Tricia McManus, who has attended countless ceremonies in her career, said she felt the weight of this most unusual year as she watched seniors from the Early College and Middle College graduate earlier this month.

“They’re exciting,” McManus said of graduation ceremonies. “But this one seems so monumental. Despite all the challenges with remote learning and the transition to in-person, they have persevered, and getting to this point where they’re walking across the stage, and doing it in-person, it’s such an important date for families, for them and for all of us in the district.”

Rather than a two-day event at Joel Coliseum, this year’s event, because of of COVID-19, will be spread over the next six days at five venues, all outdoors. Six of the 14 ceremonies will be at Truist Park, where the Dash plays.

Each graduate is limited to six tickets.

Resiliency is sure to be a theme at this year’s graduations.

Though seniors were hopeful at the beginning of the year that they could have something close to a normal year, the state Department of Health and Human Services and the school board were cautious with reopening, and their return was delayed until the holiday spike subsided.

All the time spent online, away from their school, left many seniors feeling isolated and burned out.

Pearsall said he didn’t see the point of going back to school for a few weeks. Most of his friends decided not to return as well.

For most of the year, Pearsall said he was on his computer for school work up to seven hours a day, leading to burnout and what he called a “subpar” year.

Pearsall freely admitted that he didn’t do his best work.

“At the beginning of the year, I was learning really well. But as it goes on, it becomes monotonous. It just gets boring and it’s hard to differentiate one day from another. You zone out 90 percent of the time,” Pearsall said.

Besides the joy of playing music with his classmates in band and orchestra, Pearsall said he missed the classroom experience. As a junior, he felt like he was hitting his academic stride.

“I was at the peak of my learning potential,” he said. “And I feel like I missed out on that.”

Pearsall will be going to the University of South Carolina in the fall and plans to major in biomedical engineering. He worries that what he missed out on this year in academics could hurt his growth in college.

“Sometimes I think about how nuts it is that this is something that never happened before to such a large group of people on such a large scale in modern history,” Pearsall said.

She said she is grateful that she got to enjoy some parts of her senior year. Some parents at East Forsyth put together a prom that she attended, for instance.

“I do feel like I missed out on a little bit because I wasn’t on campus but I do feel like I got more than the seniors last year were able to get,” said Wallace, who plans to go to Lenior-Rhyne College in the fall.

Her friend, Sydney Watson, decided to return to classes at East Forsyth. Though she was adjusting OK to online learning, she missed her teachers and the internet at her home was often slow.

“I’d be in the middle of something and the internet would stop. So I’d go to my neighbors, and if they weren’t there, I’d have to figure something out. I’d immediately text my teachers,” Watson said. “There were times when I felt like it was happening multiple days a week.”

While home, Watson also had to help out with her twin brothers, both in eighth grade.

“My mom is also a teacher, and there were days when all four of us were online and that was awful,” she said. “Sometimes it just didn’t work at all.”

On her first day back at school in April, she cried on the way home “because I missed it so much. I missed my teachers.”

Watson, who plans to go to UNC Wilmington, said getting through her senior year has taught her lessons.

Raevan McCain of Mount Tabor also found online learning to be a struggle.

A good student who was used to making A’s and B’s, her grades plummeted around November and December. Being home alone, she had a hard time finding the courage to ask for help.

McCain stayed remote for her classes at Mount Tabor but went to the Career Center for in-person classes.

She recounted her senior year just a few minutes after finishing her last class of the year. She breathed a big sigh of relief.

“I am ecstatic to graduate,” said McCain, who is headed to Howard University. “At one point, I wasn’t even sure this was possible. I’m finally free.”

Leslie Alexander has been principal at Reynolds High School since 2015. She will be the new assistant superintendent for leadership development with the school system.

On Wednesday, students at Reynolds High School had their turn to celebrate at Deaton Thompson Stadium.

Summer Johnson McGee is the founding dean of the health sciences school at the University of New Haven in Connecticut.

Teachers, students celebrate the end of a challenging school year

The 2020-21 school year in Forsyth County ended on Tuesday. The year started with fulltime remote learning and closed in a more traditional manner.

WATCH NOW: High Point principal serenades graduates with 'I Will Always Love You'

In the four years he's been at Andrews, Gause said, he's tried to create some unique memory for each class at their graduation or senior award ceremony. One time, he sang, "A Change is Gonna Come." Another time it was "You've Got a Friend in Me."

Saxton Rose has been on the music faculty of UNC School of the Arts since 2008 and has served as the music school's interim dean for the past year.

John Augustine, a longtime science teacher at Jefferson Middle School, died on Monday night, hours after teachers paraded in front of his house. "I love you," he told them.

East Forsyth seniors mark the end of a strange year

East Forsyth High School graduates about 430 seniors. It's the first in several graduations that will take place over the weekend.

Reynolds High School senior Sam Pearsall sits at his home desk where he worked during the school year. While some students chose to return to in-person learning as COVID-19 restrictions were eased, Sam and his family felt it best to remain remote.

Reynolds High School's Sam Pearsall plays trombone with the Reynolds' marching band in October 2017 during his freshman year. Although the marching band was active during the modified football season in his senior year, they did not march because of COVID-19 restrictions. Sam said that in-person band class is one of the activities he missed being a remote student.