The new interactive exhibit “Rooted in Race: A Community’s Journey to School Integration,” offers a historical look at the area’s painful path out of desegregation and gives voice to the Black students and faculty members who blazed the trail.

“I just knew that I was alone,” Norma Corley reflected in one of several oral histories included in the exhibit. Corley was one of three Black children to desegregate Easton Elementary School in 1958. She was also the first and only Black student at what was then called Hill Junior High.

“I always felt like I had to prove something, that any stereotypes they had about Blacks would not apply to me,” said Corley, who later learned that some of the parents of her classmates at Hill were in the Ku Klux Klan.

A project of the Winston-Salem Foundation and Triad Cultural Arts, “Rooted in Race” started as a virtual exhibit then expanded into an in-person exhibit at Union Station, 300 S. Martin Luther King Jr., Drive. It opened last week and will close on Saturday with a forum on education justice.

It will also be open to the public on Thursday and Friday from 10 a.m. to 1 p.m.

The exhibit includes a timeline of key national, state and local dates to tell the story of desegregation, starting with the landmark Brown v. Board of Education case that came before the U.S. Supreme Court in 1952. The timeline, broken into decades, ends in the 2010s, noting such milestones as the selection of Angela Hairston as the first Black superintendent of Winston-Salem/Forsyth County Schools and Malishai Woodbury as the first Black chairwoman of the school board.

Along the way, it touches on voter referendums, litigation, protests and all manner of roadblocks meant to keep Black students out of white schools and the imperfect plans to desegregate, including busing and school choice, which most would agree has not led to full integration of schools.

Anita Justice, a retired teacher in Winston-Salem/Forsyth County Schools, did the research and gathered facts for the timeline.

What stood out to her was the consistent and coordinated effort from lawmakers, voters and community leaders to make desegregation as difficult as possible.

“This was an exciting opportunity to compile research so people have a clear understanding of what took place and can understand the issues surrounding equity today,” Justice said.

While Justice’s research provides the context, the recollections of such people as Corley, who, as a brave little girl summoned the courage to walk the hallways where Blacks had not yet tread, humanize the struggle.

Joyce Mack talked about the closeness among the faculty and student body at Atkins High School, one of the “Big Four” historically Black high schools, along with Carver, Anderson and Paisley. Of the four, only Carver remains a high school.

While recalling the school spirit, Mack said that Atkins students were aware that their facilities and resources did not match those of the predominately white schools.

“They had the new stuff. We had the old pass-me-downs,” Mack said.

Faculty integration was also fraught with racism. Some white faculty members quit rather than transfer to predominately Black schools.

Marion Simpson Wimbush, a guidance counselor, talked about how the white principal at the high school where she was sent routinely snubbed her until she made a point of walking into his office and introducing herself.

“He fought that,” Wimbush said of her principal’s resistance to integrate the counseling staff. “But he did not win.”

“I used to think I could put it all behind me,” Adams said of being bused from a neighborhood in the Boston-Thurmond area to East Forsyth High School in Kernersville. “It was like someone pulled the rug out from under me and others.”

Adams said being bused out of her neighborhood was so traumatic that she tries to avoid going past East Forsyth. Her peers have similar post-traumatic stress from busing, she said.

“Something in me was broken,” Adams said.

Cheryl Harry, the director of Triad Cultural Arts, said the exhibit has allowed those who suffered during desegregation a chance to be heard.

“We hope that those most affected by desegregation will come and know that their stories are being told and some of the trauma they hold will be released,” Harry said.

Woodbury, who has pushed for equity during her soon-to-expire term on the school board, said the exhibit gave her insight into the district’s struggle to integrate.

“Rooted in Race let’s us know we still have a way to go,” she said.

For Superintendent Tricia McManus, the exhibit underscored the complexity involved with integration.

“To me, the right thing is to make sure every one of our kids is cared for, that they have the best resources, that the facilities are top notch wherever they go,” she said. “It’s making sure we have an equal and equitable approach so that students have what they need.” 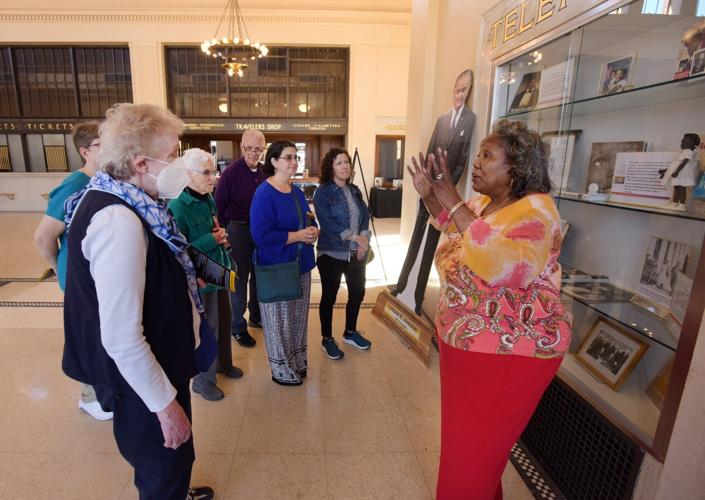 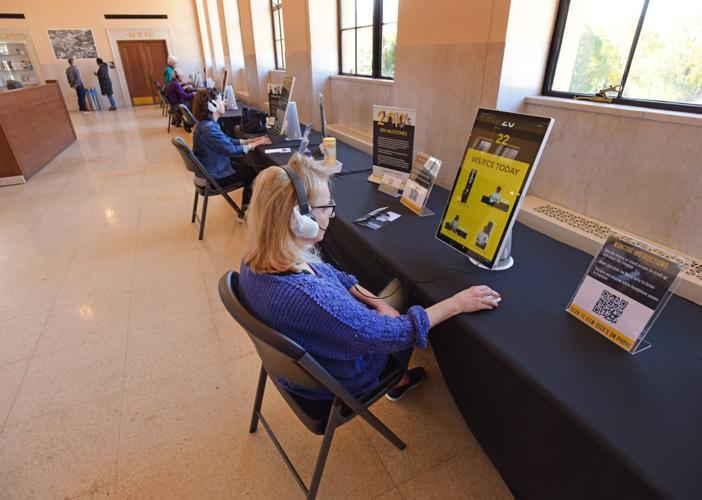 Anne Tambling from Knollwood Baptist Church looks at part of a timeline at the exhibit. 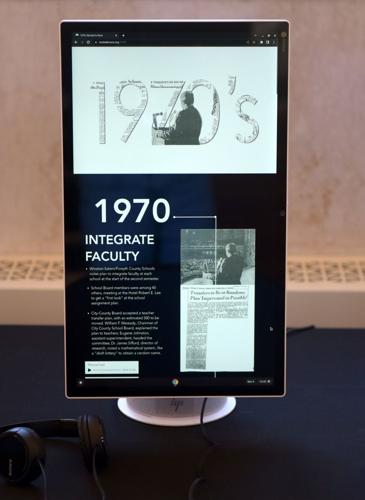 The timeline area at the Rooted in Race exhibit uses headphones and monitors to present material documenting the integration of Winston-Salem schools. 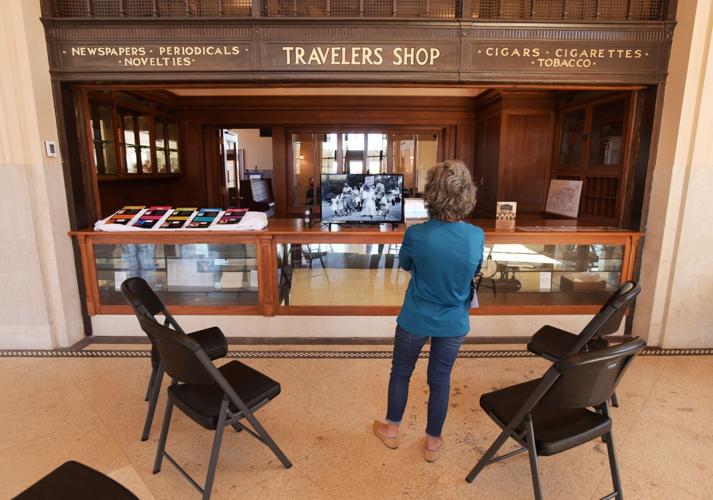 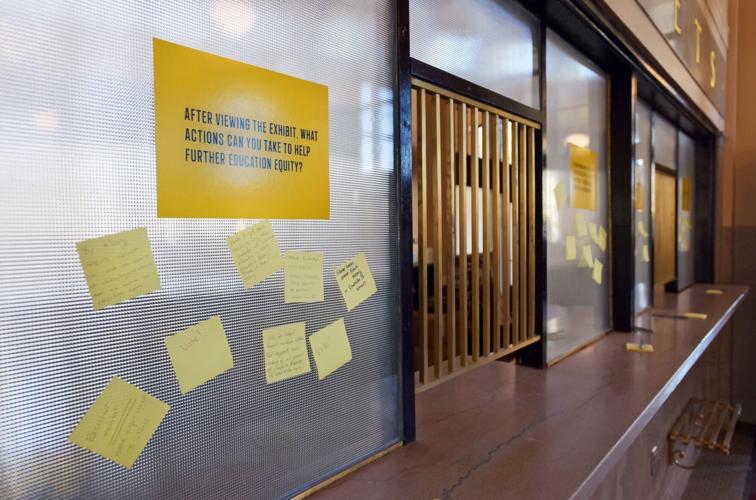 Visitors to the Rooted in Race exhibit at the historic Union Train Station are encouraged to leave their reflections and ways they might take action. 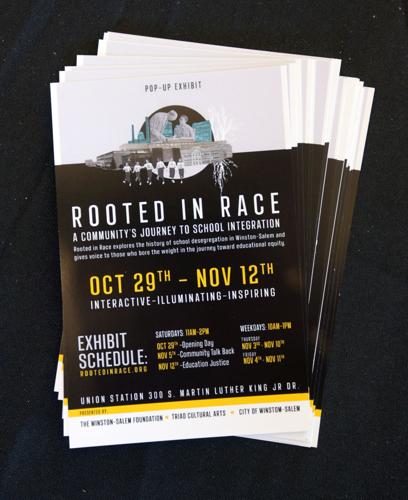 Fliers for the “Rooted in Race” exhibit. 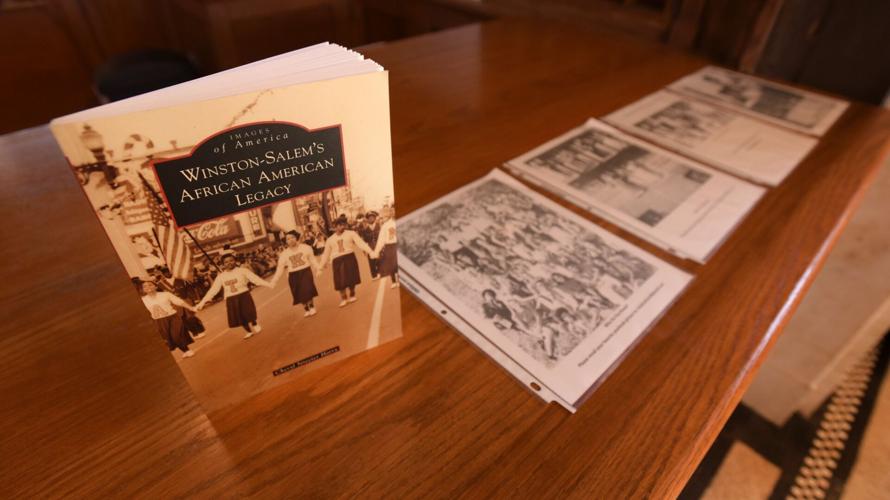 Some of the documents shared in the exhibit.