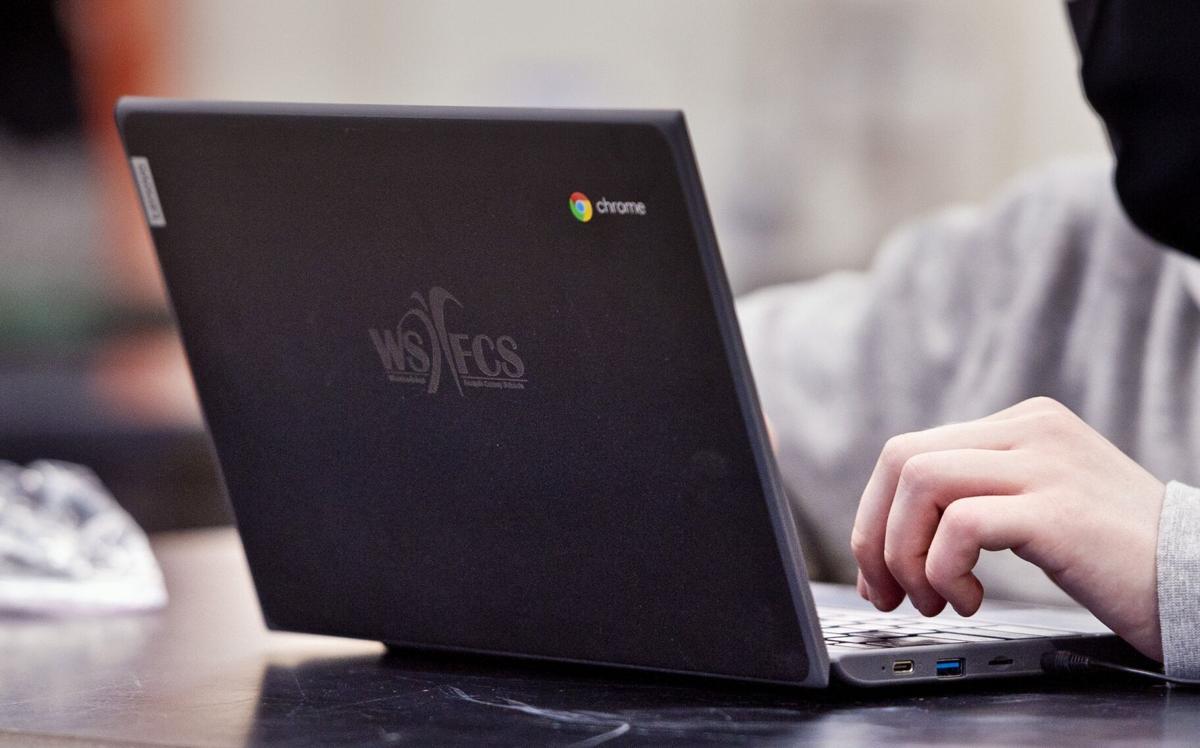 Under a proposed plan, students in the Winston-Salem/Forsyth County Schools system would be charged a technology fee at the beginning of the year to help pay for repairs on broken, school-issued Chromebooks. 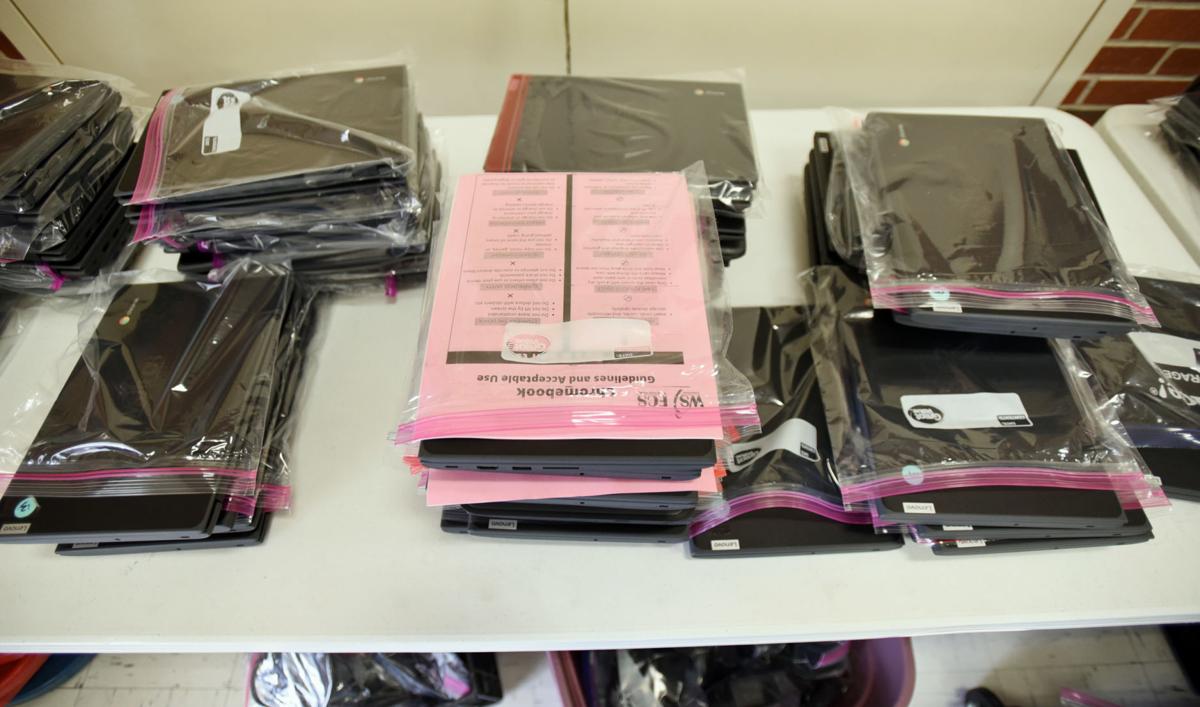 A stack of Chromebook laptops were ready for distribution at Griffith Elementary School, Wednesday, March 18, 2020.

About 40,000 students are returning their Chromebooks to Winston-Salem/Forsyth County Schools this week as the school year winds down.

While many of the Chromebooks will come back in pristine shape or show signs of the usual wear-and-tear, thousands will bear the scars of neglect and carelessness, with banged-up keys, cracked screens and broken hinges. Some students have gotten creative in their destruction, with one gluing the Chromebook screen shut with Gorilla Glue.

Though the district has covered the cost of damaged laptops this year, it is considering charging a technology fee for the 2021-22 school year to help pay for repairs not covered under warranty.

A proposed annual fee of $10 for students who qualify for free-and-reduced lunches and $20 for other students was presented to the school board last week.

Students using their own devices would not need to pay the fee.

Under the plan, students who pay the fee won’t have to cover repair costs if they damage their Chromebooks.

Students who don’t pay would be responsible for the full cost of repairs, which might mean $85 for a new screen or $65 for a new keyboard.

The fee is one of several proposed revisions to the district’s fee policy. School officials review the policy each year.

A necessary lifeline during a year of mostly remote learning, Chromebooks will remain a part of a student’s education, though school officials say they hope students will be on their computers a lot less than this year.

The district expects to hand out fewer Chromebooks next year because more students are likely to their use their own devices. If the school board approves it, the technology fee could bring in between $300,000 to $600,000 each year to help pay for repairs.

Kevin Sherrill, the assistant superintendent of technology for the district, told the school board last week that he will have a better idea how much annual repairs will cost in late June, after he and his staff have had a chance to look at the 40,000 Chromebooks that students are returning.

“We’ve set the precedent that we’re not going to charge you anything. If you break it three or four times, bring it back and we’ll give you another one. That’s what we’ve had to do this year to support our families. This is going to be a change, a bumpy change, if we implement the fee because we have taken care of everything this year at a pretty large cost to the district,” Sherrill told the board.

Sherrill said the district has been replacing 30 to 40 broken Chromebooks a day.

“You’re going to have those students break every one we give them because we’ve seen it,” he said.

Some school board members pushed back against the fee, worried that it would be too much money for a family to afford, especially at the beginning of the school year when multiple fees are due at once.

The technology fee could be a hardship for families with several children in the school system, Board Member Dana Jones said.

“That can really add up for families,” she said.

Sherrill said he understood her concerns. Some districts, he said, charge a $50 technology fee while others don’t charge anything.

“If we don’t approve a fee, we’ll find another way, but we’ll be in a situation where, say someone has five kids and all five break their Chromebook and we try to assess a charge of $80 per (device), which they’re not going to pay. We just have to be prepared to absorb that cost,” he said.

The school district is in the process of figuring out how to spend millions of dollars in federal relief money. Sherrill said the district could probably use some of that money for technology but the money is meant to be spent in ways that are sustainable.

Next year, students will get protective cases for their Chromebooks, which will reduce the number of repairs.

Students who don’t return their Chromebooks this year will be billed, Sherrill said.

Once public input is gathered, the district may revise the proposed fees. Whatever it decides, the policy must be approved by the school board before it can be enacted. That should happen within the next month.

'We are not sitting back': With four guns confiscated on Winston-Salem/Forsyth County Schools campuses this year, the superintendent talks about improving security

In the latest incident, law enforcement officials found a gun in a student's backpack at Mount Tabor High School on Thursday.

Elkin Middle was the only middle school in the state to be honored.

After one week, 207 positive cases among students, 20 among staff in Winston-Salem/Forsyth district

The school district reported its cases after one week of school. Some of the highest cases are in high schools.

School board to consider upgrades at Reynolds, Prep and Parkland. Plan includes practice field at Reynolds next to Hanes Park

A high-quality practice field at Reynolds High School could be used by 14 teams that now spread across the county and in Hanes Park to practice. The school board will soon consider whether to pay for this and other athletics improvements.

After a deadly school shooting, Thursday was for healing, praying — and doubling down on efforts to help kids in Winston-Salem/Forsyth Schools

Classes are canceled on Friday for Mount Tabor High School students. With the Labor Day weekend, students and staff will get an extra day to help heal from Wednesday's shooting death on campus.

New Wake Forest president embraces challenges, opportunities. 'See me as someone who is listening and learning.'

There’s never going to be an easy time to become president of a private university with a major academic, athletics, research and — increasing…

For parents of Mount Tabor students, a long, anxious wait in a hot parking lot after school shooting in Winston-Salem

Parents waited for hours in a hot parking lot to be reunited with their children. The reunions were made more difficult because the suspect was on the loose and reported to be in the area.

Under a proposed plan, students in the Winston-Salem/Forsyth County Schools system would be charged a technology fee at the beginning of the year to help pay for repairs on broken, school-issued Chromebooks.

A stack of Chromebook laptops were ready for distribution at Griffith Elementary School, Wednesday, March 18, 2020.