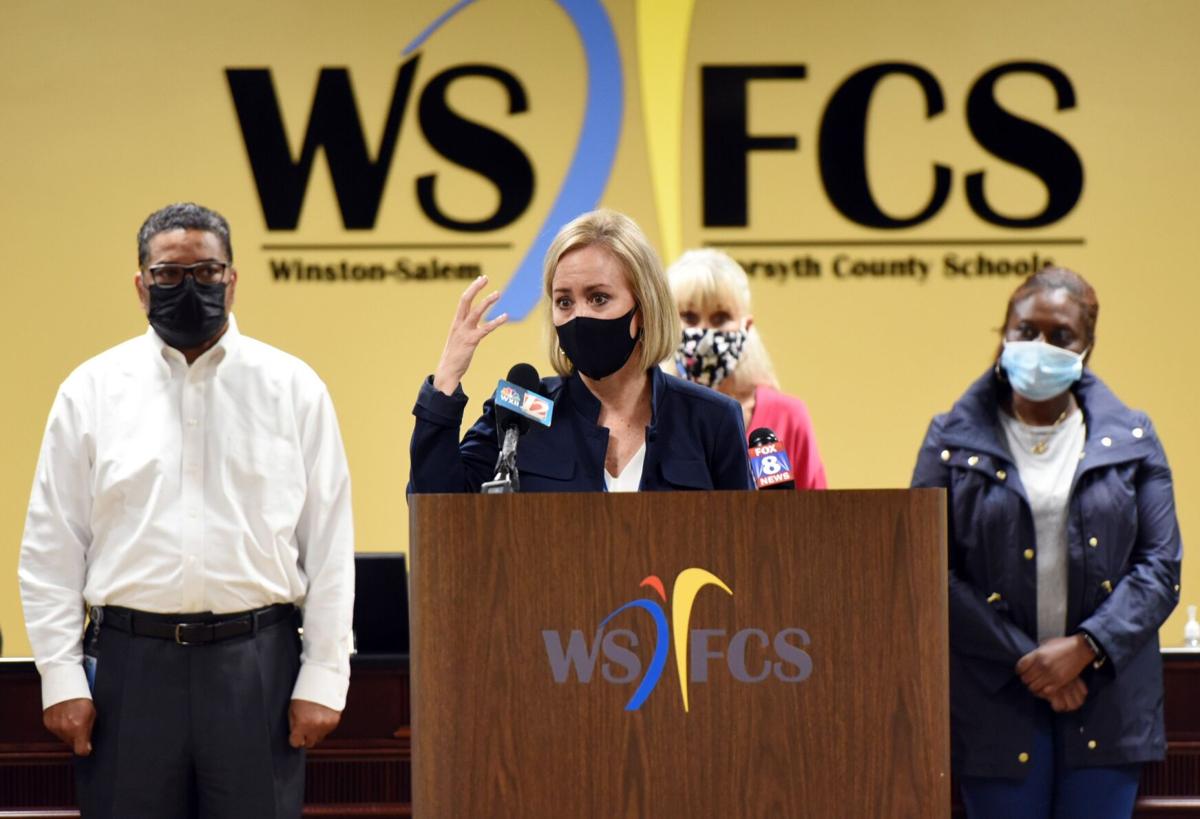 Winston-Salem/Forsyth County Schools superintendent Tricia McManus talks about efforts to curb the guns that are being brought to school during a press conference on Thursday at the school system’s education building. 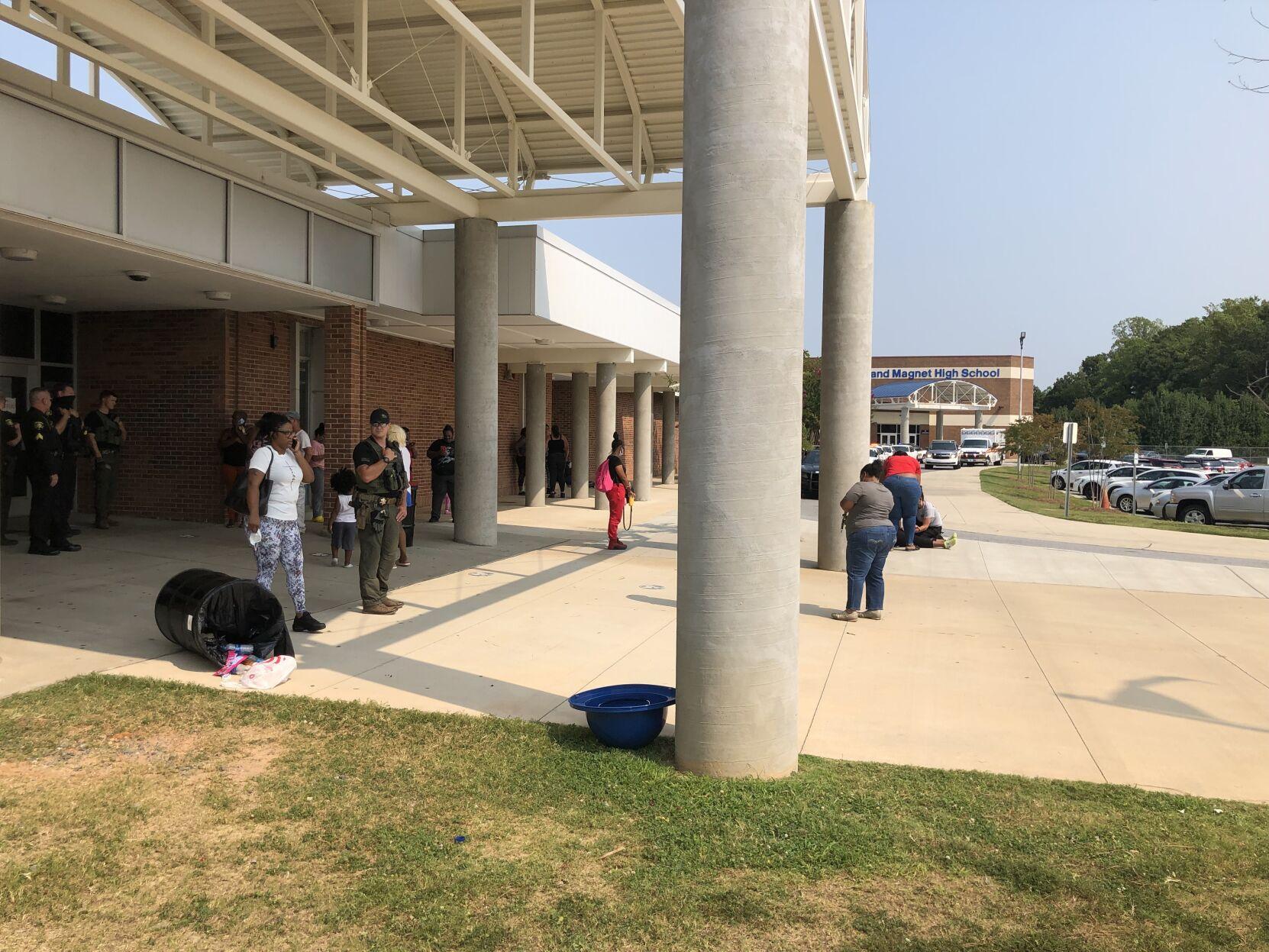 Just 5 weeks old, the school year has been marked by a spate of gun-related incidents that have put students, staff and parents on edge. Since a student was fatally shot at Mount Tabor High School on Sept. 1, guns have been found on students at Reynolds and Parkland. Last week, several rounds of gunfire near Parkland High School at dismissal time sent students scurrying back into the school to safety, frightening many of them.

Sheriff Bobby Kimbrough said the guns are “coming from a lot of different places. Some of the guns are stolen that the kids are carrying,” he said. Others are given to students by adult gang members, the sheriff said.

“Everyone who’s a gang member is not a teenager,” Kimbrough said. “Some of these kids in the gangs are old enough to purchase a gun.”

The presence of guns and fights is not the result of any sort of ongoing gang war, he said. But he did say there is a presence of gangs in the school system.

Students who are gang members bring those affiliations with them when they attend local schools, Kimbrough said.

Thursday’s press conference with McManus was an attempt to reassure the school district that its leaders are taking measures to improve safety and send a message that 99% of its 53,000 students are doing the right thing, are safe and want to be in school.

On Thursday, a deputy who is assigned as a school resource officer at Mount Tabor received an anonymous tip about a student with a weapon, the Forsyth County Sheriff’s Office said.

The student will be charged with possessing a weapon on campus, the sheriff’s office said.

McManus said students who bring firearms to a school campus are suspended for 365 days and are transferred to alternative schools.

In addition to the four firearms, three BB guns have been found on students at Paisley Middle School, McManus said.

The school district is likely to soon hire a security consultant to review plans, make assessments and recommend changes, she said. The school board will need to approve such a hire, which could happen as soon as two or three weeks.

In addition, the school district has implemented a clear-bag policy at football games and has begun using a hand-held metal detector, or wand, at large sporting events. Those changes came in response to the shooting at Mount Tabor and a gunshot that was fired outside of a football stadium in Charlotte while Glenn High School was playing.

McManus said the clear-bag policy and “wanding” could be expanded to inside the schools.

Each middle and high school has metal detection wands that administrators use as needed if they suspect a student has a weapon.

School officials will also spend more time at Parkland, Mount Tabor and Reynolds high schools to review supervision plans and try to figure out why fights are happening and talk to students about alternatives to violence.

“I’ve spent time in all three of these schools ... great things are happening on these campuses. It’s these sporadic events that paint a picture that the school is unsafe and there is chaos, and it’s not true,” McManus said.

The school district will also hold community forums to talk with parents about gun violence and plans to hire more social workers and counselors, she said.

Despite the high-profile incidents, fights among middle and high school students are down this year compared to 2019, McManus said.

However, the number of guns in the district has jumped from three reports in 2016 to eight in 2020, a year when students were on campus three months fewer than normal because of the COVID-19 pandemic, according to statistics compiled by the N.C. Department of Public Instruction.

“We want to make sure that everything we do is going to solve the problem and not just provide a false sense of security,” McManus said. “Everything we do has got to be well thought out and intentional.”

John Hinton contributed to this story.

Displaced Syrians face threat of freezing to death in tents

Displaced Syrians face threat of freezing to death in tents

Overall, the case count was up nearly 300 over last week. The number of staff members infected decreased.

School board approves $3,000 in bonuses for district employees

Vice Provost Kami Chavis of Wake Forest University, a criminal justice expert and professor at the WFU School of Law, has been named the Hayne…

Public schools in Forsyth County will be closed on Wednesday as ice on roads makes for difficult travel in too many locations, school officials said.

The school district canceled school for the third day. Friday is already scheduled as a teacher workday.

The graduation season will start May 12 with the Early College and Middle College.

Schools closed in Winston-Salem/Forsyth on Tuesday

Citing hazardous conditions on many secondary roads in Winston-Salem and Forsyth County, the public school district has canceled classes for T…

Superintendent Tricia McManus said in a message to the district's certified staff on Thursday night said that because of the calculation error, the amount the school board had approved was roughly $16 million dollars more than what had been budgeted for local increases.

Winston-Salem/Forsyth County Schools superintendent Tricia McManus talks about efforts to curb the guns that are being brought to school during a press conference on Thursday at the school system’s education building.