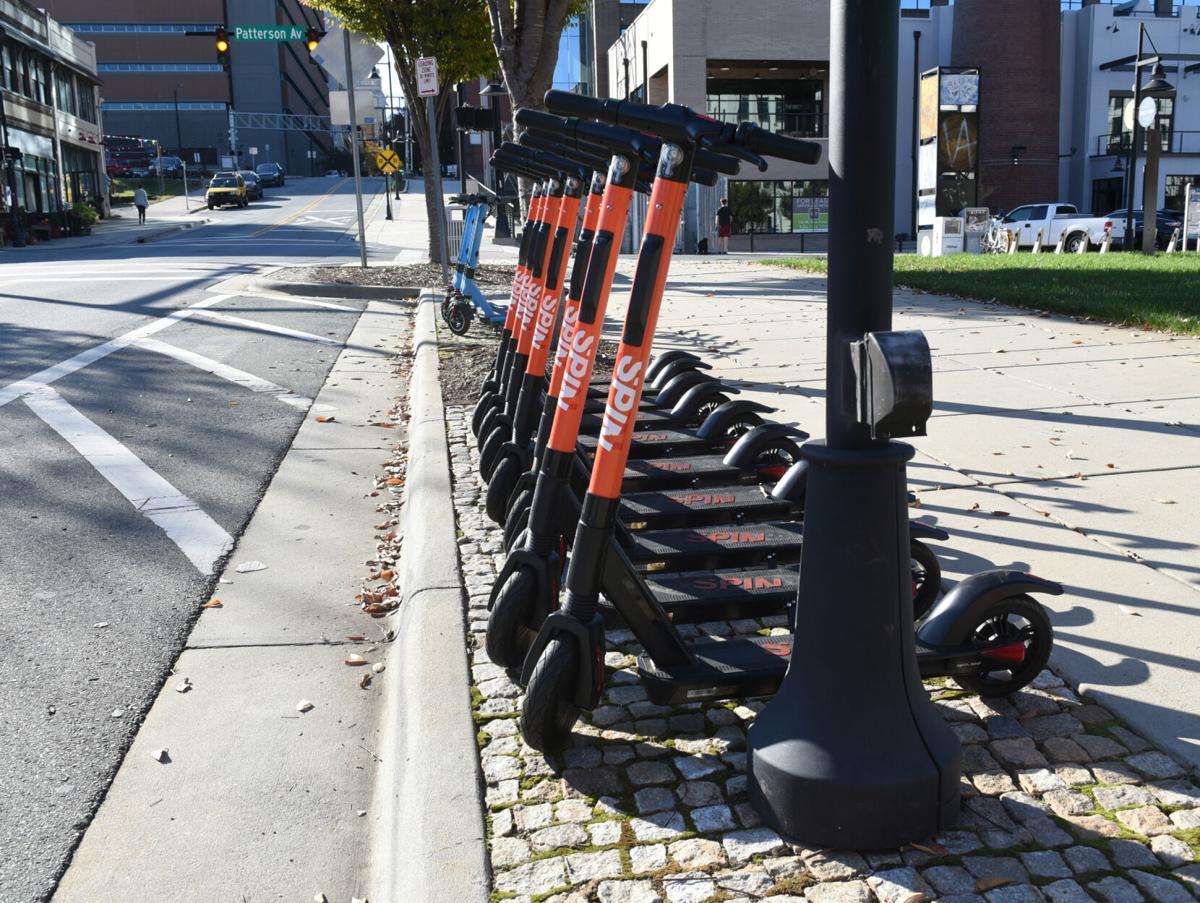 Spin (foreground) and Blue Duck scooters are lined up near Bailey Park on Friday. The two companies have the only permits awarded by the city to operate an e-scooter business. 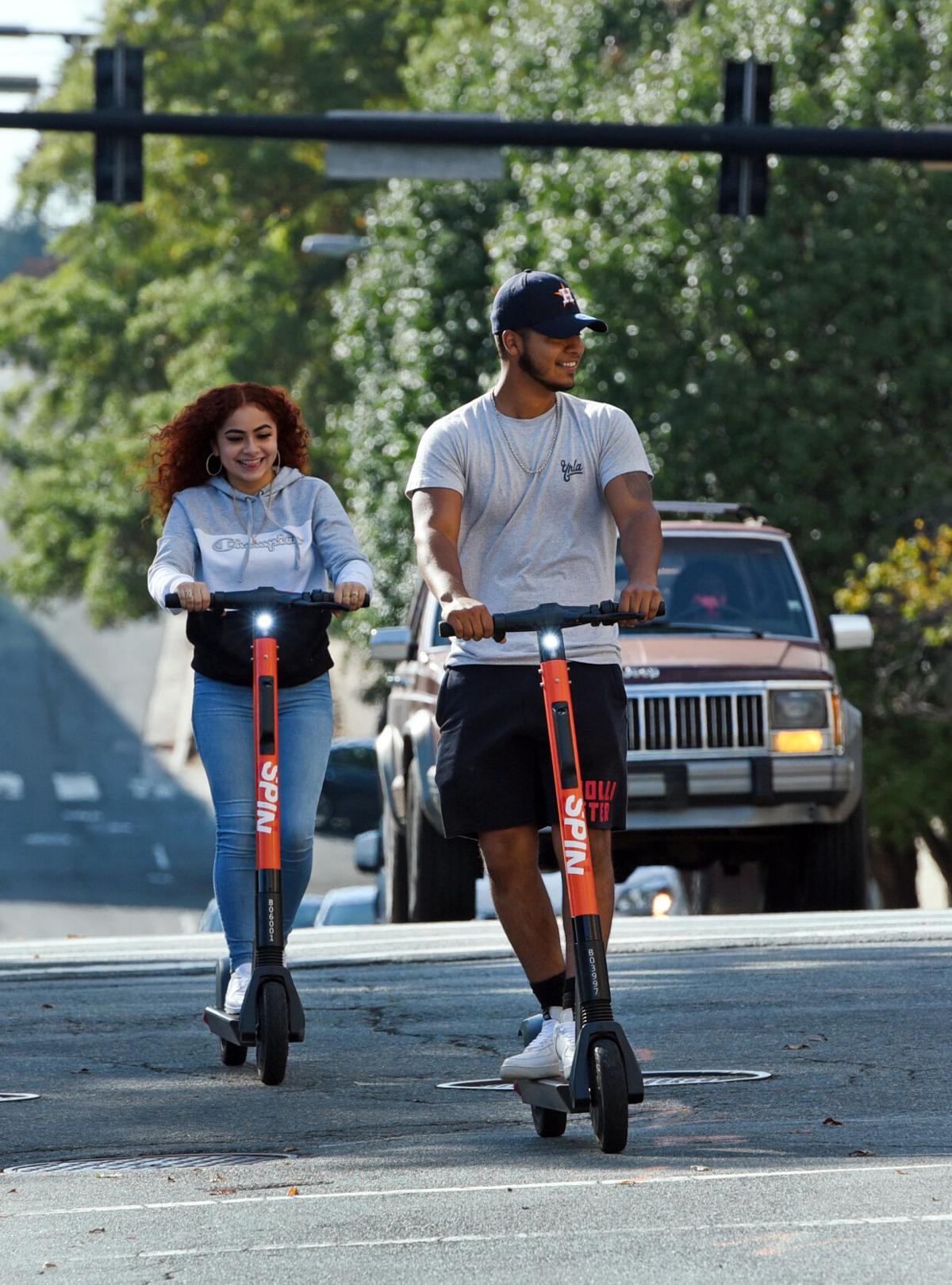 Eduardo Pacheco and Rosa Montero ride Spin scooters around downtown Winston-Salem, Friday, Oct. 23. The two said they did not have a destination in mind, they were just out for a ride. 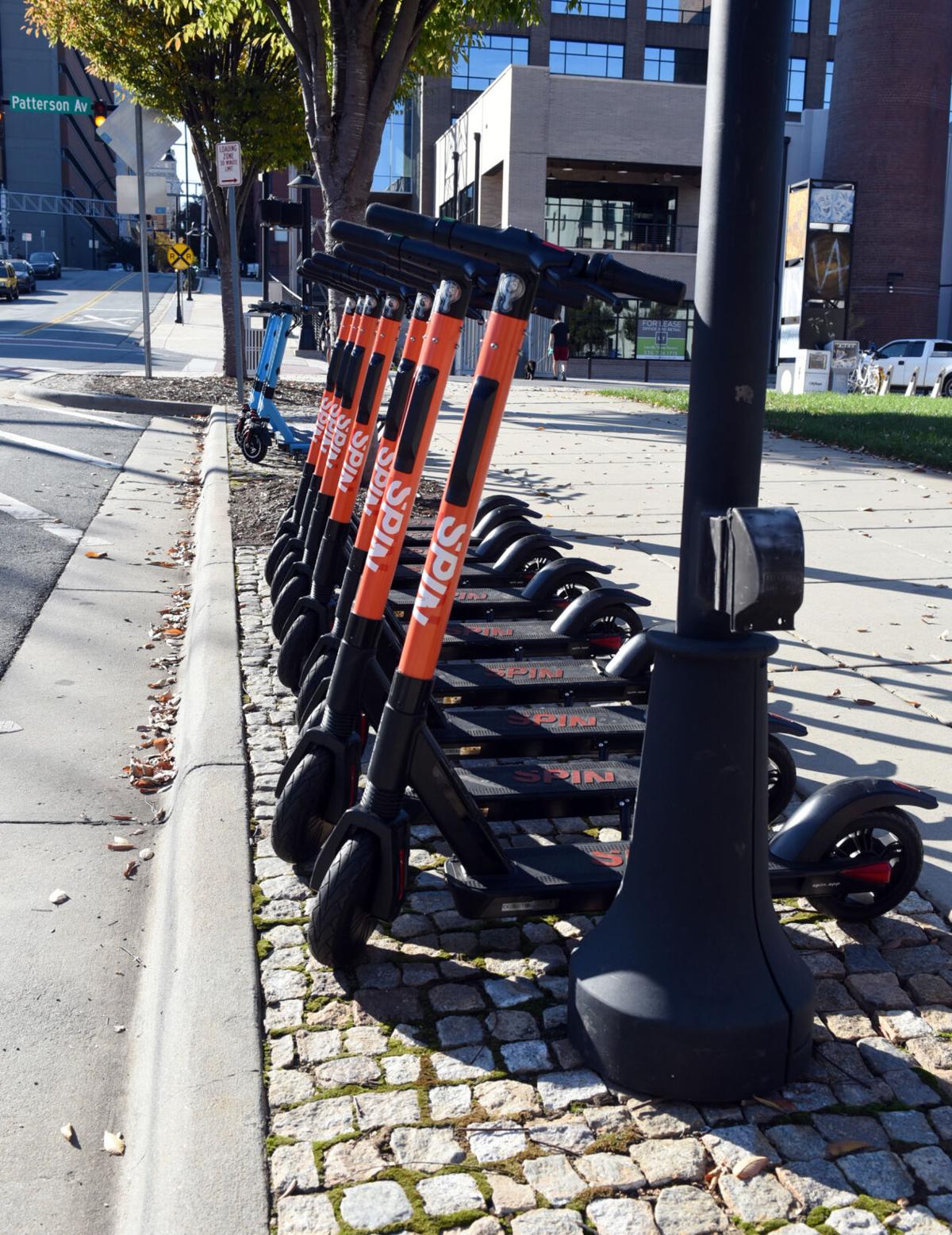 Spin (foreground) and Blue Duck scooters are lined up near Bailey Park, Friday. Blue Duck, based in San Antonio, said it is expanding its operations into North Carolina.

Scooters are back on the streets of Winston-Salem after a coronavirus-driven hiatus, with a second company scheduled to join first-arrival Spin soon.

And bike rentals are coming back too, at the start of the year, thanks to the National Cycling Center here.

San Antonio-based Blue Duck announced recently it would be operating a fleet of electric scooters in Winston-Salem, in what the company called an expansion of its operations into North Carolina.

Neither of the two companies operated scooters here before the coronavirus swept all the scooters off the streets, although Spin was in a partnership with Zagster when Zagster grabbed one of the two permits the city awarded last year.

Blue Duck had applied to place scooters here last year but was not one of the companies selected.

Blue Duck said it was hiring a local operations team and would operate out of a local warehouse. The company will remove the scooters from the streets each night for recharging, then put them out the following morning.

One of the companies, Spin, had asked the city if it would relax the requirement that the scooters be picked up each night, citing the cost. But when members of the city council heard about the request it didn't go anywhere.

"Before the Zagster bikes and stations were removed, as they were in pretty much all other markets nationally, the National Cycling Center rallied and purchased all the bikes and stations in the Winston-Salem network," Hosey said in an email.

The cycling center figured it was a good opportunity to go ahead and expand, Hosey said, so an additional 50 bikes and 10 stations were bought. The bikes are in storage.

"We are in the process of seeking out sponsors, rebranding, repairing bikes, finalizing additional station locations and tweaking all the behind-the-scene items in preparations of relaunching by the new year," he said.

A check of the Zagster company's website showed no indication of whether or when the company might resume operations, but it's a moot point as far as Winston-Salem is concerned, at least this year: The city allows only two companies to operate here at a time.

Both Zagster and VeoRide, the other scooter company that operated here starting last fall, shut down their operations here last spring, said Matthew Burczyk with the city's transportation department.

"From the time they were operating last fall and winter to the beginning of March there were 10,000 rides," Burczyk said, noting the popularity of the scooters.

The scooters first arrived on the streets of Winston-Salem in 2018, when a company called Bird dropped hundreds of scooters here without warning. The scooters were immensely popular with some, immensely irritating to others, who complained about them dashing through traffic and riding down sidewalks.

After a ban and the development of a scooter ordinance, the city allowed Zagster and VeoRide to put out their scooters, with fees and regulations on how they could be operated.

The bike-rental program operated by the National Cycling Center operates differently from scooter rentals, in that the bikes have to be returned to a docking stations.

Spin (foreground) and Blue Duck scooters are lined up near Bailey Park on Friday. The two companies have the only permits awarded by the city to operate an e-scooter business.

Eduardo Pacheco and Rosa Montero ride Spin scooters around downtown Winston-Salem, Friday, Oct. 23. The two said they did not have a destination in mind, they were just out for a ride.

Spin (foreground) and Blue Duck scooters are lined up near Bailey Park, Friday. Blue Duck, based in San Antonio, said it is expanding its operations into North Carolina.