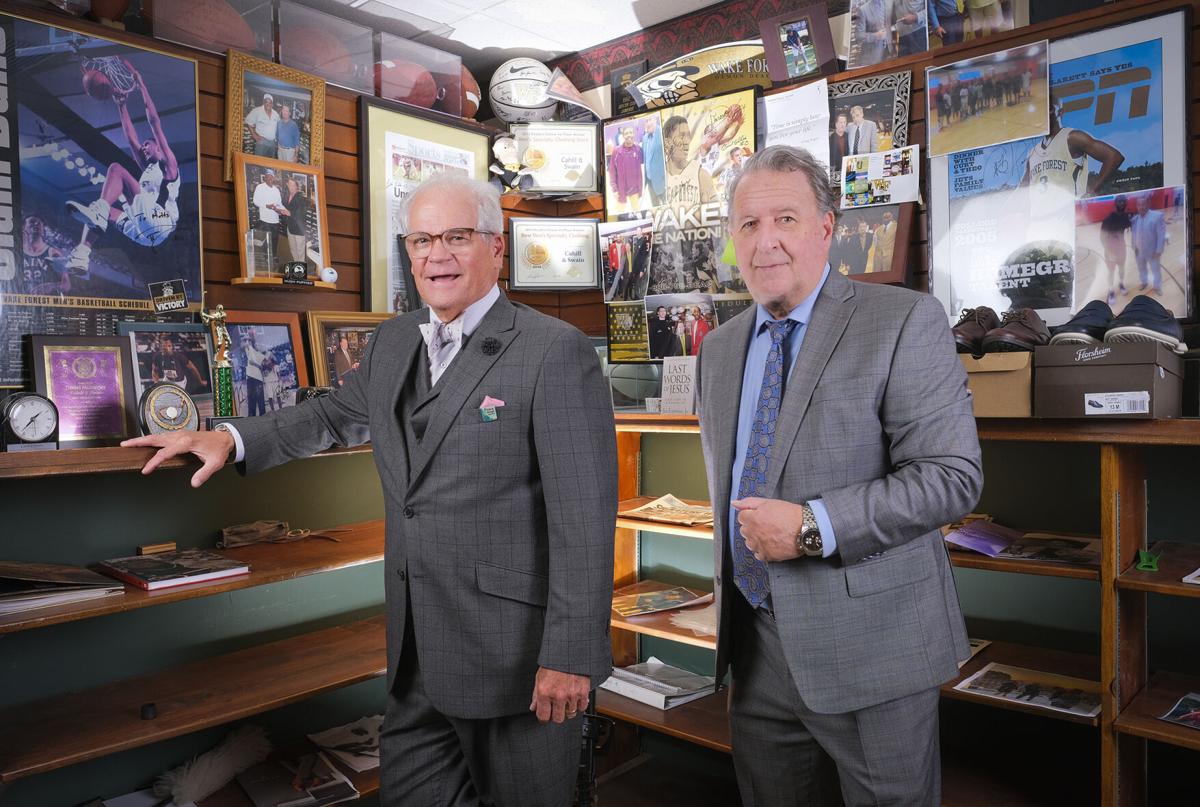 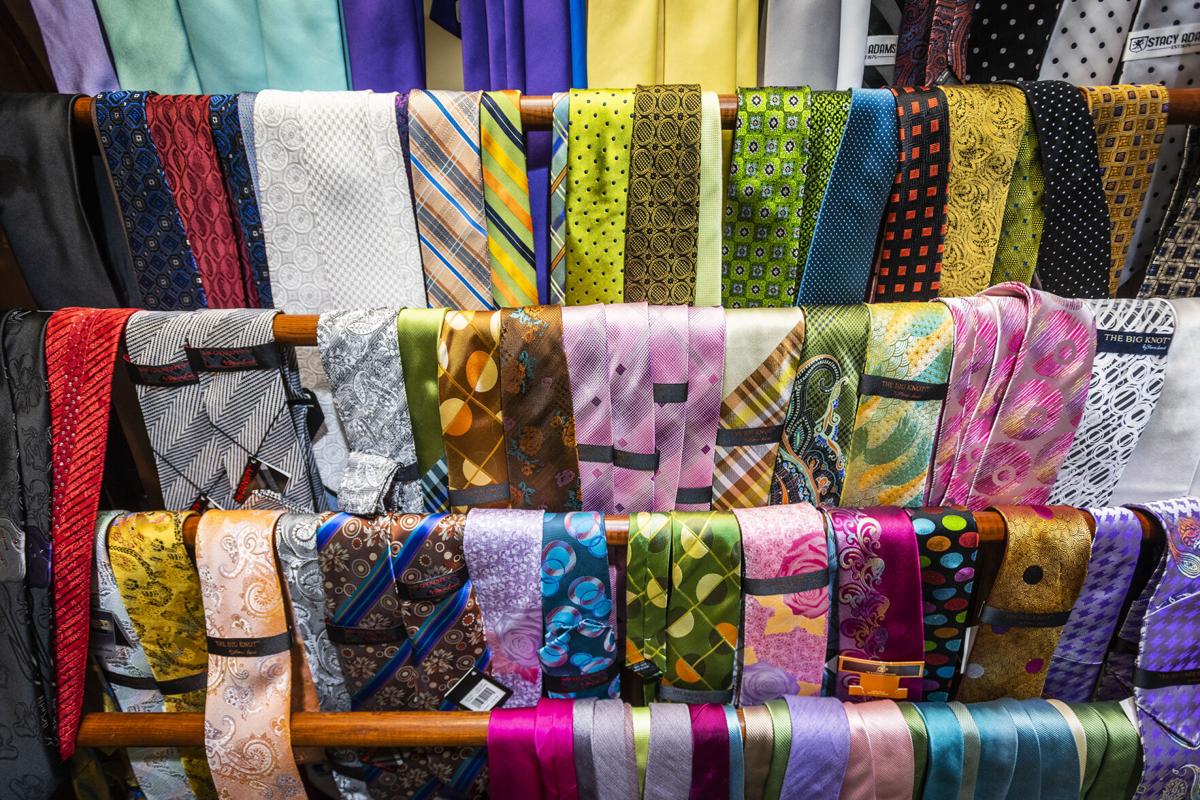 Ties for sale at Cahill & Swain on Wednesday in Winston-Salem. 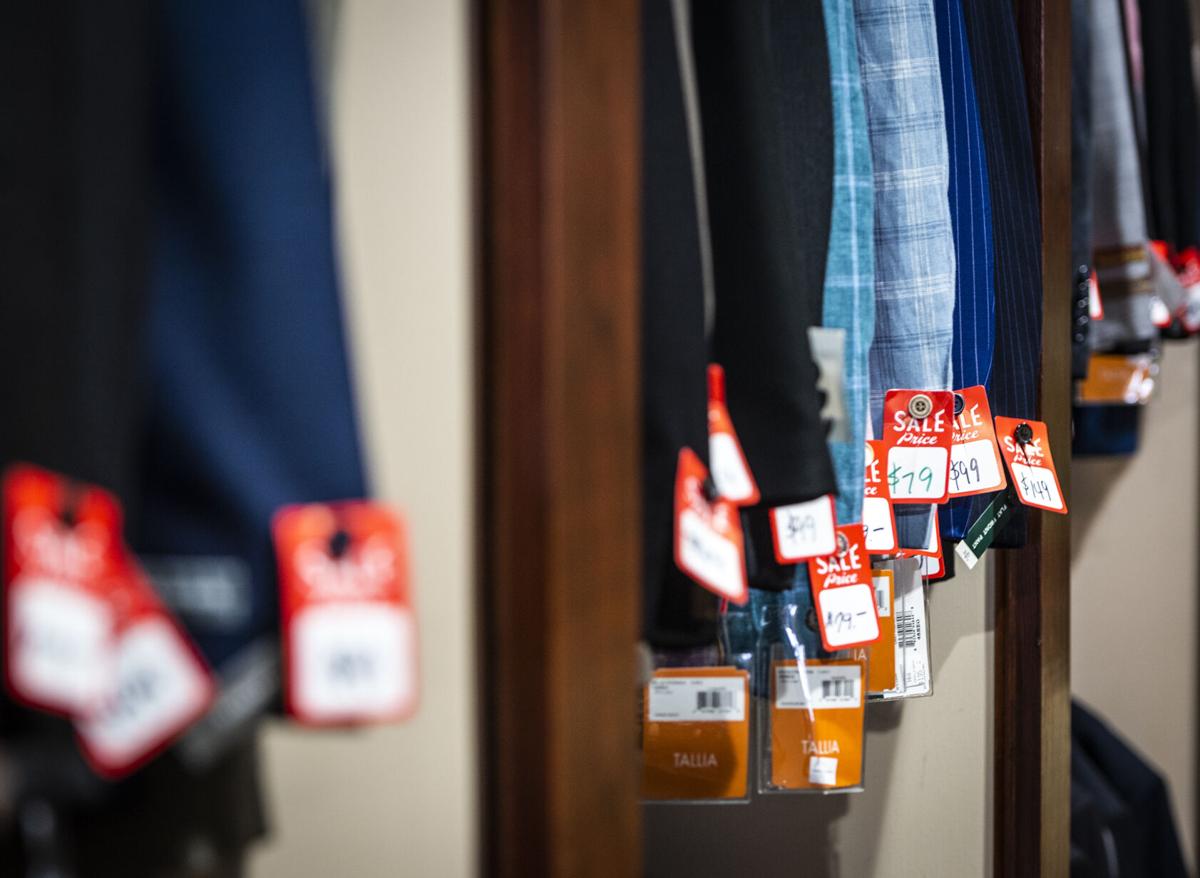 Sale tags on the remaining stock at Cahill & Swain on Wednesday.

Mike Swain wasn’t difficult to spot. His sharp blue three-piece suit, complete with a bow tie and a pocket square, were a dead giveaway for the president of Cahill & Swain, one of the town’s most revered clothing stores.

The personalized plate, “Cahill & Swain,” on the back of his Kia SUV, helped, too.

“Thanks for coming,” Swain said. “It’s been a little busy around here.”

Swain and business partner Daniel Motsinger were smack in the middle of a hectic week — the very last in a 71-year run for an iconic local business — so finding him wouldn’t be the easiest task.

An era dating back to the close of World War II was ending, so trying to find one of the store’s namesakes seemed worthwhile — even if it involved making a cold call introduction to a well-dressed man.

A banner in front of the last remaining Cahill & Swain store in the Northside Shopping Center advertised this one final sale. The dwindling inventory — a rack of bright spring ties and dress shoes used as rentals for proms and weddings — indicated that it’s been a success.

That shouldn’t come as a surprise because Swain and Motsinger were just following the same retail playbook that’s been in use since R.C. “Bill” Swain and Frank Cahill opened their first store downtown in 1949.

“Dad got out of the Army with GI Bill and started working for Norman Stockton,” Swain said, referring to a friendly crosstown rival in the clothing business. “After three years, he decided he needed to do something for himself.”

Strange as it sounds compared to today’s cutthroat business climate, Swain (and Cahill) did so with Stockton’s blessing.

“They had a gentlemen’s agreement,” Swain said. Norman Stockton would carry certain brands, Cahill and Swain others. In an age when men dressed for work the same way they did for church on Sundays, there was plenty of business — divide and conquer.

“There were no department stores, either,” Swain said.

That first store, by following a formula that emphasized location, service and products, expanded through time into multiple locations. Winston-Salem, a leading city of the New South with R.J. Reynolds Tobacco, Piedmont Airlines and booming homegrown banks, created plenty of demand.

“Winston-Salem was, I think, the biggest city in North Carolina at the time,” Swain said. “It was a good place to have a shop.”

Five, actually, at one time. As the city grew and times changed, Cahill & Swain was clever enough to adapt with them: it had, at various points in the ‘60s and ‘70s stores in Parkway Plaza, Sherwood Plaza, Parkview shopping center, downtown and Hanes Mall. Other spots, on Healy Drive and Knollwood Road, had runs, too.

“Shopping centers changed everything,” Swain said. “What was that politician’s name? Ross Perot, who talked about that giant sucking sound … that was Hanes Mall.”

The rapid construction of malls in the ‘70s exacerbated the decline of American downtown. The fact that downtown booms while Hanes Mall works through bankruptcy isn’t lost on retail survivors.

Place to hang out

Not long after the downtown store closed, a new location popped up in the Northside Shopping Center where Swain and Motsinger were working to wrap things up.

It was brilliant in its simplicity. The store turned into a hangout spot of sorts where Coach Clarence “Big House” Gaines of Winston-Salem State and generations of Wake Forest basketball coaches would go to ensure sideline standards remained high.

“That was all Dan,” Swain said.

Indeed, framed photos, paintings and assorted memorabilia featuring Gaines and a line of such Wake Forest greats as Skip Prosser, Tim Duncan and Randolph Childress stand out among the going-out-of-business displays.

“It was kind of like a barbershop where people would like to come and talk sports,” Motsinger said. “And find some incredible threads, hopefully.”

The pandemic, Swain said, was not the reason for closing an era in local haberdashery. But it sure didn’t help, either.

Other factors, including a race to the bottom in men’s fashion tastes and the rise of online shopping, mattered more.

The inexorable, inevitable advancement of age for the proprietors played a role, too. Swain says he’ll spend more time tutoring elementary school students with the influx of free time. When the pandemic allows, of course.

“I heard a friend say, ‘When you get to the end of a chapter, you have to turn the page,” Swain said. “We’re turning the page.”

Nothing lasts forever. Except maybe the classic look of a well-cut suit.

Ties for sale at Cahill & Swain on Wednesday in Winston-Salem.

Sale tags on the remaining stock at Cahill & Swain on Wednesday.