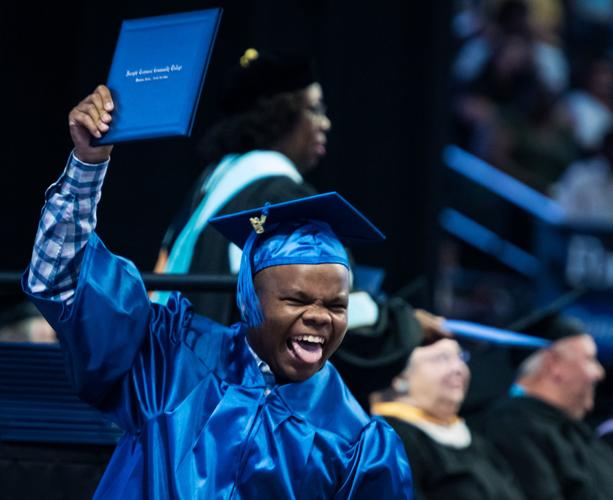 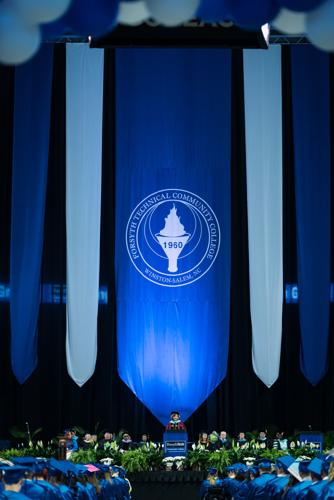 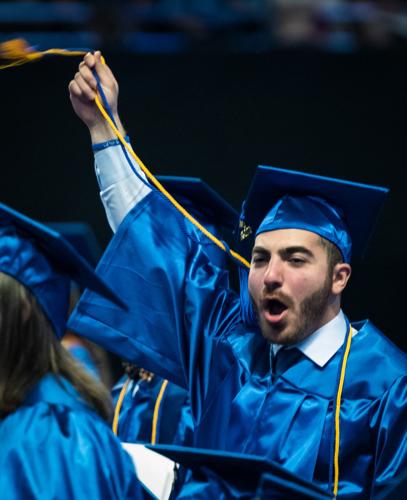 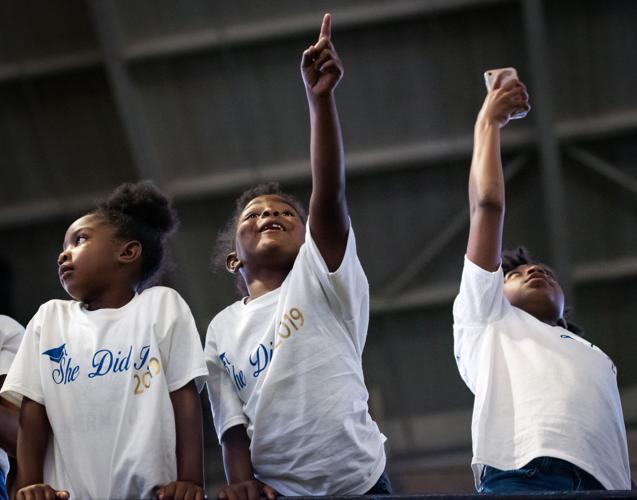 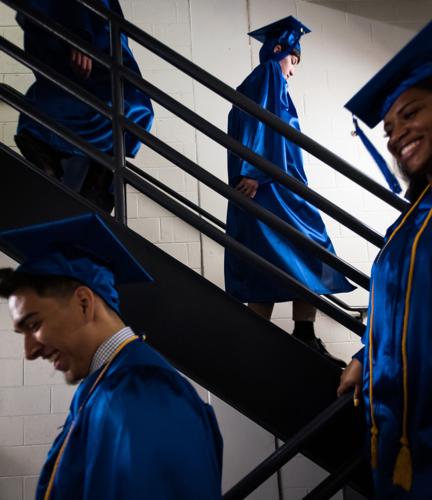 Students file down the stairwell for the processional at Forsyth Tech’s commencement.

Forsyth Technical Community College President Janet Spriggs sent the college’s 2019 graduates off with a bit of advice for the next phase of their lives.

“Work hard. Stay humble. Be kind. And make a difference,” she told more than 600 students who took part in the college’s commencement exercises Thursday evening at Joel Coliseum in Winston-Salem. “Four simple basic credos that guide my life and I believe can help all of you find your purpose, guide you to your dreams and help you live your best life.”

PHOTOS: See a gallery of images from Forsyth Tech's graduation.

Growing up, Spriggs said, there was not a lot of money in her family but she felt wealthy.

“I grew up with people all around me who loved me unconditionally,” Spriggs said.

Those people, she said, also took time to be with her and teach her the value of hard work, humility and kindness.

She added, “We all have a finite amount of time to write our life story. I believe that the best use of our time is when we live our life so that our legacies are not tied to physical objects or material structures, but rather our legacies are seen in the lives of people …. I encourage all of you to live a life that leaves the world a better place because of the difference that you make.”

Among Forsyth Tech’s 2019 graduates were Mary Coleman and Danielle Rosson of Winston-Salem, Todd Evans of Advance and Obed Cahua of King. All four gave their thoughts on their big day prior to the commencement ceremony.

At 77, Coleman is Forsyth Tech’s oldest graduate in the school’s history.

“This is déjà vu,” she said of receiving an associate’s degree in early childhood from Forsyth Tech. “This is my third degree.”

“They just keep on coming,” she said laughing.

Coleman spent 25 years working as a nurse, but in 2001 she was driving to work and was hit by a drunk driver.

“It put me out of work,” she said. “I was in the hospital for three months. I had head injuries. I’ve got a knot right here on my head. I had neck injuries. I had low-back injuries and I was walking with a cane.”

After convalescing for about eight years, Coleman moved from Maryland to Winston-Salem to be with one of her daughters then officially moved here in 2005.

She got a job with a local day care and worked there for six years but found she needed further qualifications to work in the day care field. In 2013, she started on her associate’s degree at Forsyth Tech.

After graduation, Coleman plans to continue working as an infant-toddler teacher at Foundations Early Learning Center in Winston-Salem.

Rosson, 32, graduated from the cardiovascular sonography program. In addition to her classes at Forsyth Tech, she held a full-time nurse assistant position and completed 30 hours of clinical hours each week, as well as maintained a 4.0 every semester.

A 2009 graduate of UNC Greensboro, Rosson worked as a nanny prior to deciding to attend Forsyth Tech.

She said that one of the children she nannied for had open-heart surgery but is doing fine now.

“All of his heart conditions were caught before he was even born,” Rosson said.

She said his condition was caught from a sonogram.

“I wanted to see what I could do to help families have success stories like that,” she said.

She specifically does ultrasounds on hearts. She has accepted a position with Duke University Hospital as a cardiac sonographer.

He started a career as a paramedic in 2000, working for Forsyth County EMS.

He said he got the opportunity to work sometimes at Wake Forest Baptist Medical Center while being a paramedic.

“I really enjoyed the hospital aspect of it and decided I wanted to go back to school to become a nurse to help with the care of patients,” he said.

He is currently working in the emergency room as a certified nursing assistant for Forsyth Medical Center and working toward advancing his career by becoming a nurse in the ICU at the medical center.

“I really enjoy helping to take care of people,” Evans said. “It’s one of the things I’ve always enjoyed doing.”

Cahua, who has autism, said he has been good with computers since he was 5 years old.

“I like working on computers very much,” he said.

During Forsyth Tech’s Community Computer Diagnostic Day, Cahua volunteered to work with people in the community who brought their computers in for the free service.

Although working with computers comes natural to him, Cahua said he is still working on his social skills.

Next year, he plans to continue his education and earn an associate’s degree in IT.

Students file down the stairwell for the processional at Forsyth Tech’s commencement.