Subscribe
Read Today's E-Edition
Share This
A mailer approved by Forsyth County DA Jim O'Neill's campaign implies Denise Hartsfield was removed as a judge. 'That's just a lie," says Hartsfield, who retired as a judge in 2021.
0 Comments
Share this

Denise Hartsfield wants Forsyth County District Attorney Jim O’Neill to retract what she says are false and negative campaign ads and mailers against her. If O’Neill doesn’t, Hartsfield said, she will consider filing a complaint with the State Board of Elections under the same state law that he used against N.C. Attorney General Josh Stein over a political ad from 2020.

“It is simply that these advertisements and paper writings knowingly provide false and misleading information that prejudices the opponent and that opponent is me,” Hartsfield said during a news conference across from the Forsyth County Hall of Justice on Friday afternoon.

O’Neill filed a complaint over a political ad in the 2020 attorney general’s race that O’Neill said was false and defamatory. The State Board of Elections said there was no clear violation of the rarely-used 1931 state law that O’Neill cited. The Wake County District Attorney’s Office pursued a criminal investigation, which has been temporarily stopped over a legal battle that is pending in the Fourth Circuit of the U.S. Court of Appeals over the law’s constitutionality.

In a statement, O’Neill stood by the accuracy of his campaign ads: “The mail from my campaign accurately informs the voter as to the disciplinary actions taken against my opponent by the North Carolina Judicial Standards Commission and then upheld by the highest courts in North Carolina, for her abuse of our legal system.”

The mailer accuses Hartsfield of using her position to ignore a 48-hour cooling off period for a Wake Forest University basketball player who was charged with assaulting his girlfriend in 2010. The mailer then says the N.C. Judicial Standards Commission “described Denise Hartsfield’s unethical conduct ‘as a sufficient and significant abuse of power’ in over 82 cases.” The final paragraph says Hartsfield “is no longer a judge” – with no explanation of why that’s the case.

The mailer is, at the very least, misleading in several ways.

Hartsfield was never disciplined for her actions regarding the Wake Forest University basketball player.

The N.C. Supreme Court did suspend Hartsfield for 75 days in 2012 for fixing traffic tickets in at least 82 cases. After the suspension, she returned to the bench and ran unopposed for two additional terms – 2014 and 2018 before she retired in December 2021. Her suspension had nothing to do with domestic violence.

Under state law, defendants charged with certain domestic-violence crimes can be held up to 48 hours, but a judge has the discretion to release defendants sooner. If a judge cannot be reached, then magistrates have to order defendants to be held for the full 48 hours.

Hartsfield said what bothered her most about the mailer was that it falsely implied that she was no longer a judge because of her handling of domestic-violence cases.

“That’s just a lie,” she said Friday morning. “I wasn’t suspended for anything related to that, and I retired as a judge.”

O’Neill responded to questions about the mailer this way: “As to the mailer you provided to me, put out by an independent group, they are just that: independent. Any questions regarding the information you are seeking about that mailing should be directed to the individual or group listed as sponsoring the material you referenced.”

O’Neill’s campaign has paid for an ad that also takes Hartsfield to task for her handling of the same domestic-violence case, featuring a retired Winston-Salem police officer.

Another mailer, put out by Defend US PAC, shows a photo of an unidentified man with his fist clinched, along with a picture of Hartsfield, with the words, “Denise Hartsfield – Creating a Safe Haven for Violent Criminals.” Defend US PAC previously supported O’Neill in his race to be N.C. Attorney General, distributing a mailer that shows a picture of former president Donald Trump alongside a picture of O’Neill.

The Wake Forest basketball player in question was Tony Woods. He was charged with assaulting his girlfriend on Labor Day in 2010. Winston-Salem police said Woods kicked Courtney Lorel Barbour and pushed her down, causing a spinal fracture, at an apartment they shared. He eventually pleaded guilty to misdemeanor assault on a female and received a suspended 60-day jail sentence.

Hartsfield said she met with Woods’ attorney, Michael Grace, who she said at the news conference she respected and who told her he could guarantee that Woods would show up at court hearings. She said she insisted that Grace contact a prosecutor in the Forsyth County District Attorney’s Office before she made a decision.

She said she wasn’t required to contact prosecutors but did so as a courtesy. Her recollection was that O’Neill himself was notified. She also said she contacted Barbour about what happened with Woods and to assure her that Woods would not be coming back to their apartment.

“Mr. O’Neill knows that these are false statements,” she said. “He understands that there’s no statutory requirement for a judge not to be able to release persons from this particular situation. And he has claimed in one commercial that I just didn’t observe (the law), and in another that I abused it, neither of which are correct.”

O’Neill said he is “shocked that Hartsfield, to this day, simply does not understand the importance to a victim of domestic violence to have in place the 48-hour cooling off period to separate from their attacker and to be able to find safe shelter, nor does Hartsfield seem to care.”

O’Neill did not respond to question about whether he agreed with Hartsfield’s description of the state law on the 48-hour cooling-off period.

Separately, Hate Out of Winston-Salem has criticized another campaign ad sent out by the Defend US Political Action Committee, which endorses conservative and Republican politicians. The 30-second ad features a darkened picture of Denise Hartsfield under the words, “Denise Hartsfield is dangerous” and cites her 75-day suspension and her handling of Woods’ case.

“The ad was brought to us by some of our white comrades and we took a look at it on YouTube,” said Miranda Jones, one of the founders of the social justice organization. The organization, Jones said, does not endorse candidates and has not endorsed anyone in the Forsyth County District Attorney’s race.

“Denise Hartsfield was made to look really dark,” said Jones, who is Black, as is Hartsfield. “That felt like a typical racist playbook for Black politicians and Black people in general... When I looked at the ad, she looks eight shades darker.”

According to an Oct. 25 New York Times article, Republicans have been running ads that label Black candidates as “different” and “dangerous.” In a mailer sent to several state House Districts, the New Mexico Republican Party darkened the hands of a barber that is shown giving a white child a haircut, the New York Times reported. The ad asks, “Do you want a sex offender cutting your child’s hair?”

As the New York Times article points out, there have been previous appeals to white fears and resentments, particularly surrounding crime. The most famous was George Bush’s ad using Willie Horton, a Black convict, against Michael Dukakis in 1988.

Dustin McIntyre, who is listed as a treasurer for the political action committee, did not return a call seeking comment Friday.

When asked, O’Neill offered this comment: “As a father and husband of a mixed-race family, I am outraged but not surprised at Hartsfield’s desperate attempts to distract the public from the real issues in this race: the fact is that she was removed from office in 2011 for conduct found to be grossly unethical by the North Carolina Judicial Standards Commission and those findings were then upheld by the North Carolina Supreme Court.”

Hartsfield did not mention race during her news conference but has previously said O’Neill’s office lacks diversity. O’Neill also declined to comment on the Defend US PAC ad, saying that all questions on ads not done by his campaign should be directed to the individual or group that paid for them.

“I am more than willing to stand on my professional and personal record over the last 26 years for treating people fairly and keeping this community safe,” he said in an emailed statement.

“We felt it was really racist and we wanted to call it out,” Jones said of the ad.

And while Hate Out of Winston-Salem is not endorsing anyone, Jones said the organization is bothered by O’Neill’s embrace of former president Donald Trump in 2020 when O’Neill was running for attorney general and Trump came to Winston-Salem.

“We feel he’s dangerous for Black people and for poor people,” she said. “We’re not saying we know Denise Hartsfield or her platform. We don’t want to see someone who is patently racist in office again, either.”

O’Neill did not have an immediate response to Hate Out of Winston-Salem’s comments. 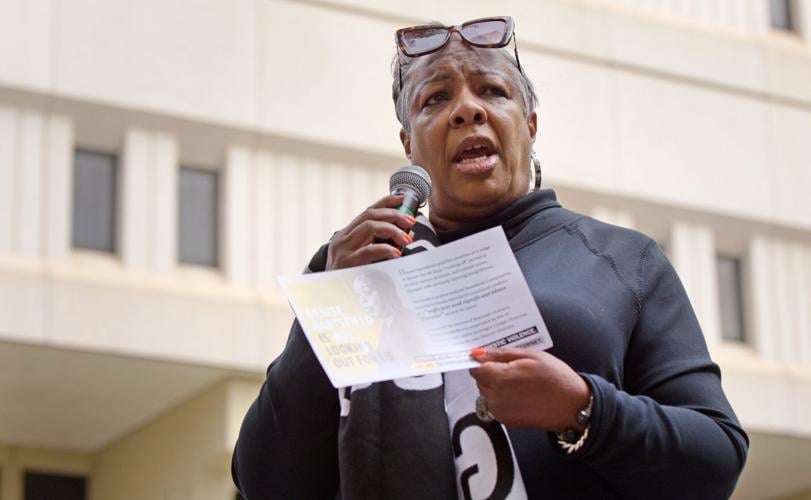 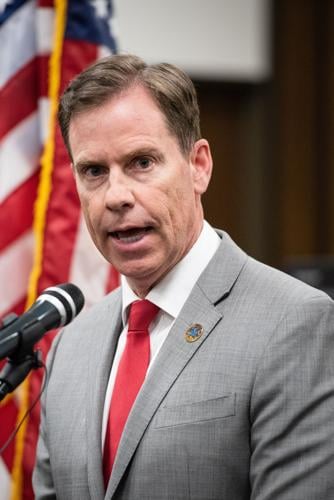