Nearly 400 people participated in an abortion-rights demonstration Saturday in downtown Winston-Salem to protest a U.S. Supreme Court decision that could overturn the constitutional right to abortion.

The local rally was among more than 380 similar events Saturday across the United States in response to the leaked draft opinion earlier this month that suggests that the Supreme Court will likely overturn the 1973 Roe. Vs. Wade decision that legalized abortions nationwide.

In Winston-Salem, demonstrators held signs, some of which said, “Abortion is Health Care,” “Bad Laws Turn Good People into Criminals,” “Bans Only Make Abortions Dangerous” and “Freedom is Choice.”

A group of seven abortion opponents staged a counter protest, and four of them walked in front of the abortion-rights supporters along West Fourth Street and Main Street.

Robin Deer, of Winston-Salem, held a sign that said, “55,000,000 Killed in the Name of Choice.” Three other counter protesters held signs that said “I am of the Pro-Life Generation.”

The actual number of abortions that have occurred since 1973 is more than 63 million, according to the Guttmacher Institute, a reproductive rights group based in New York.

However, five abortion-rights supporters followed behind the counter protesters and loudly chanted, “Who sent us? Ruth sent us,” “Get your Bible off my body,” and “Keep your hands off my body.”

The protesters were referring to the late Ruth Bader Ginsburg, an associate justice of the U.S. Supreme Court and a strong supporter of abortion rights. Ginsburg died in September 2020 at the age of 87.

The abortion-rights supporters’ chants drowned out the chants of the counter protesters. At times, the two sides stared at each other, but there were no incidents. Both sides remained peaceful.

A man, who declined to identify himself, held a combined U.S. and Gadsden flag with the “Don’t Tread on Me” motto. The man told the female demonstrators, “You have three months to get an abortion. You are going to lose.”

A woman, who also declined to identify herself, held a sign that said, “All Life Matters. All Liberty Matters. All Pursuits of Happiness Matter.”

Julia McKinna, an abortion-rights supporter, wore a white night gown with blood stains as she held up four clothes hangers.

“The other side (abortion opponents) needs to remember that women actually died before Roe vs. Wade,” McKinna said.

At the rally, Audrey Muck, the vice president of the Triad chapter of the National Organization for Women, told the crowd that it would be a disaster if the Supreme Court overturns the Roe vs. Wade ruling.

Women of color, low-income and rural women would be severely affected by the ruling, said Muck, the treasurer of the Equal Rights Amendment North Carolina Alliance.

“This is judicial activism at its worst,” Muck said. “They are determined to put their thumbs on the scales — to prefer potential life over the lives of living, breathing women. And I am mad as hell about that.”

Abortion rights have improved the lives of women who can pursue careers and control when and if they have children, Muck said.

“Removing federal protection of even minimal abortion access will be devastating to millions of people, and not just women,” Muck said.

If abortion rights end, “women will die,” Muck said. “If this was about healthy babies, these sharia Republicans wouldn’t be fighting so hard against universal health care.”

“They wouldn’t be fighting against affordable health care,” Muck said.

Bill Soukup of Winston-Salem urged the abortion-rights supporters to vote in Tuesday’s primary.

“We have been losing this fight because we have not gone out to vote,” Soukup said.

Soukup urged the crowd to vote out legislators and Congressional members who oppose abortion.

The Rev. Craig Schaub, the minister at Parkway United Church of Christ in Winston-Salem, said he is among religion leaders who support safe and legal abortions.

“I stand for religious freedoms,” Schaub said. “But people must make the decision about what is right for them.”

The Rev. Michelle Johnson, an associate minister at Parkway United Church of Christ, told the audience that abortion opponents must “take their hands off our bodies.

“Jesus gave us choices,” Johnson said. “And we have choices. There is hope if we are all in this together.”

Rabbi Andrew Ettin, the spiritual leader of Temple Israel in Salisbury, said that women’s abortion rights must be respected.

“Women have a moral right to make decisions about their own lives,” said Ettin, an adjunct professor in the Department of the Study of Religions and the School of Divinity at Wake Forest University.

“Women have the right to make that decision themselves,” Ettin said. “This is a fight at the moment, but it’s really a fight about the future of health care.”

PHOTOS & VIDEO: Bans Off Our Bodies march in Winston-Salem

Journal photographer Allison Lee Isley and the Associated Press contributed to this story.

WATCH NOW: Supporters of abortion rights rally outside of the Federal Building in Winston-Salem

Protesters applaud while organizer Carol Caldwell speaks during the Bans Off Our Bodies march on Saturday outside of the Federal Building in downtown Winston-Salem. 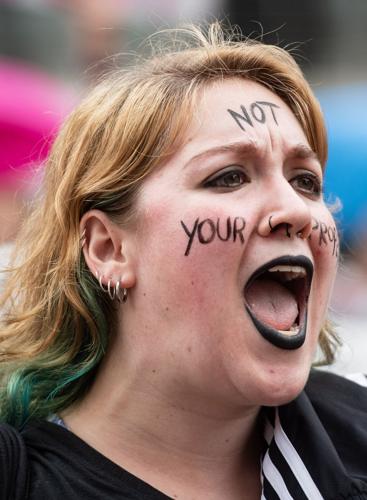 Marguerite McGurk participates in a chant during the Bans Off Our Bodies march. “Not Your Property” is written on McGurk’s face. 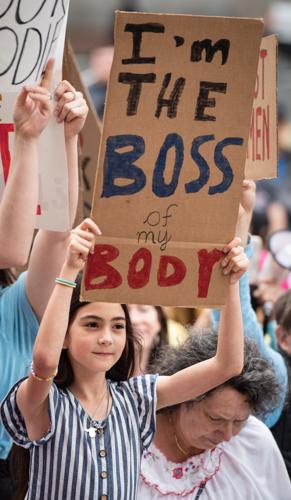 Quinn Lee, 9, holds up a sign that reads “I’m the boss of my body” during the Bans Off Our Bodies march. 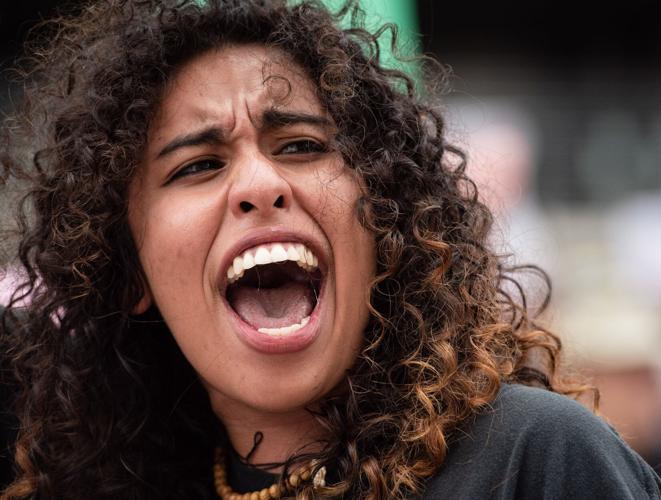 Margaret Ramirez chants during the Bans Off Our Bodies march on Saturday. 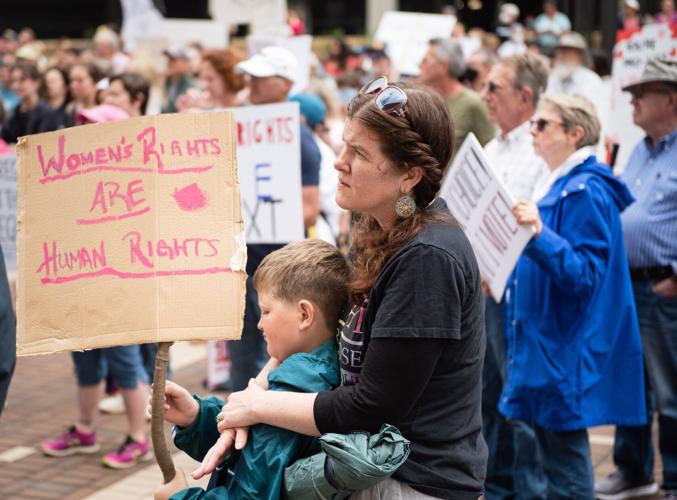 Sarah Thompson holds her son, Jackson Thomas, 9, during the Bans Off Our Bodies march on Saturday outside of the Federal Building in downtown Winston-Salem.

A counter-protester who would not provide a name (left) disputes with Lois Roewade during the Bans Off Our Bodies march. 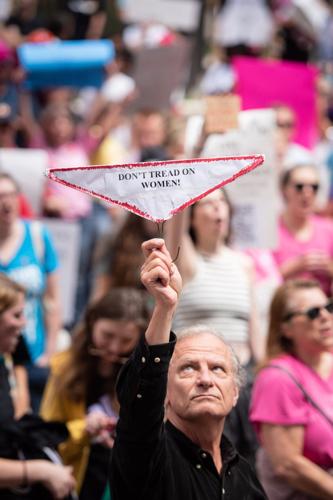 Sherrill Ward holds up a coat hanger that reads “Don’t Tread on Women” during the Bans Off Our Bodies march.