Kimbrough, 61, is running for his second term as sheriff after defeating longtime Sheriff Bill Schatzman in 2018. Leyba, 58, is making his second run for the seat. Leyba lost in the Republican primary to Schatzman.

Kimbrough, a retired special agent with the U.S. Drug Enforcement Administration, said he’s running on his record during his first term as sheriff.

“Everything we’ve said that we would do, we have delivered,” Kimbrough said.

Leyba said he decided to run for sheriff again because many local residents told him he would make a good sheriff.

“I believe with my past experience and knowledge in law enforcement that I can make a difference in Forsyth County,” Leyba said.

Leyba, a native of Torrance, Calif., worked as a deputy for the Forsyth County Sheriff’s Office under Republican Sheriff Ron Barker from March 2000 to August 2000, and from October 2000 to June 2002, according to the Forsyth County Human Resources Department.

Leyba also worked as a police officer in Kernersville and Durham as well as in Newport Beach, Calif., and Los Angeles.

“It (law enforcement) is really embedded in me,” Leyba said. “It’s in my blood.”

The winner will lead an agency with 290 deputies, 249 detention officers, 29 telecommunicators and 67 civilian employees, the sheriff’s office said. The sheriff’s office has a budget for fiscal year 2022-23 of about $69.33 million.

Kimbrough has a huge advantage in regard to raising money for his re-election campaign over Leyba’s fundraising for his campaign, according to local campaign finance reports.

Leyba has raised $120 for his campaign during the second quarter of 2022, according to a report.

Kimbrough points to a number of programs started during his term. The agency has launched Live911, which will direct 911 calls to the deputies’ patrol cars and the office’s communication center simultaneously, Kimbrough said.

The technology will allow deputies to have quicker response times to residents’ 911 calls, he said.

The sheriff’s office also has deployed a drone “to capture everything in real time intelligence,” Kimbrough said.

The drone is being dispatched to the scenes of the emergency calls from the Village Inn Hotel in Clemmons and will allow deputies to see what’s going on before they arrive, Kimbrough said.

That technology is designed to reduce the deputies’ response times, de-escalate confrontations between deputies and potential criminals and reduce car chases, Kimbrough said.

Kimbrough and some deputies are visiting local schools to participate in their drivers’ education programs, he said.

Kimbrough and his deputies are providing information to students to help them interact better with law enforcement officers if they are stopped while they are driving, Kimbrough said.

Before he was elected as sheriff, Kimbrough worked as an international security expert and a law enforcement analyst. An author, Kimbrough graduated from North Forsyth High School before receiving a bachelor’s degree in sociology from High Point University in 1991, according to his biography.

Kimbrough then received a master’s degree in leadership from Piedmont International University in 2020, and he is working on his doctorate in organizational leadership, according to his biography.

Kimbrough then worked with high-risk offenders at the N.C. Department of Probation and Parole, his biography says. From 1995 to 2016, he served as a special agent in the Drug Enforcement Administration.

Leyba drives a food transportation truck for Sheetz Inc., a convenience store company, which has a regional headquarters in Burlington.

Leyba said that if he is elected as sheriff, “I will be the type of person that is boots to the ground. You will see me working out there in the streets with my officers, and being in uniform.

“I will be doing a lot community policing,” Leyba said, “letting the entire residents and citizens of Forsyth County know who the sheriff is.”

Leyba said that Kimbrough works from behind his desk.

“You won’t find me behind a desk,” Leyba said. “The whole community will know who the sheriff of Forsyth County is.”

Many county residents don’t know that Kimbrough is the sheriff of Forsyth County, Leyba said.

Leyba said his campaign platform is improving school safety, hiring and retaining qualified deputies and detention officers, and being involved in the daily operations of the sheriff’s office.

Regarding school safety, Leyba said he wants to ensure Forsyth County parents that their children will be safe going to school.

Leyba said he wants to increase the number of deputies assigned to the local schools as school resource officers.

Two or three deputies should be assigned to every elementary, middle and high school in the county, Leyba said.

A group of 39 deputies currently are assigned as school resource officers at the school district’s middle and high schools, said Christina Howell, a spokeswoman for the sheriff’s office. No deputy is assigned to an elementary school.

“I have a plan to implement that — a plan that I used when I was back in LA (Los Angeles),” Leyba said. “It’s a system that will work, considering the population in LA is four times greater than the population in Winston-Salem and Forsyth County combined.”

Leyba declined to reveal details of this plan.

On Aug. 12, two detention officers were seriously injured when a jail inmate attacked them, the sheriff’s office said. The officers are recovering from their injuries.

Matthew Logan West, 24, of Walkertown, was charged with two counts of assault on detention center employees, inflicting serious injuries and possession of a weapon as a prisoner, according to arrest warrants.

At that time, West was being held in the jail on a murder charge in connection with the Jan. 10 shooting death of a Winston-Salem man.

Kimbrough mentioned the salary bonuses that the Forsyth County Board of Commissioners recently provided to some detention officers.

Neville had been pinned in a prone restraint position in a cell for nearly an hour while Neville told officers that he could not breathe, according to video footage.

Kimbrough did not publicly acknowledge Neville’s death for six months until the Winston-Salem Journal asked questions about it. Kimbrough said he kept quiet about Neville’s death partially because of a request from attorneys for Neville’s family.

“I know that there was a public outcry,” Kimbrough said. “They wanted to know it immediately after Neville died.”

Over the summer of 2020, Triad Abolition Project led a 49-day occupation of Bailey Park and 55 people were arrested during protests in downtown Winston-Salem.

Kimbrough said he participated in the early local protests sparked by George Floyd’s murder in Minneapolis in late May 2020.

Kimbrough said he has no regrets about how he personally handled the Neville case.

“My first response is with the family,” Kimbrough said. “I’m always going to err on what the family says. If it legal and if it’s right, and that what’s they want, and I am going to give them that. They deserve that.”

As Nov. 8 election approaches, Leyba said he wants increased patrols of sheriff’s deputies throughout the county.

More deputies should be patrolling the county’s neighborhoods, he said. Leyba also declined to provide details of this plan

Leyba said he would bring back the reserve deputies’ program, who must be sworn officers, and the CSI (Crime Scene Investigations) unit. Leyba declined to provide details of this plan as well.

The sheriff’s office gave its CSI unit to the WSPD, Leyba said.

“Forsyth County had one of the best CSI divisions in the state,” Leyba said. “(Sheriff Schatzman) gave it all away.”

In April 2018 before the Democratic and Republican primaries, Kimbrough and Leyba criticized Schatzman for reducing the sheriff’s office’s vice/narcotics division and disbanding its crime scene investigation unit.

At that time, Schatzman said he assigned deputies to where they were needed and based on the calls for service.

Leyba said he would restore the sheriff’s office’s highway interdiction team, which were assigned along the county’s highways and major thoroughfares.

“I want to conquer the drug trafficking in the county,” Leyba said.

Leyba would apply for state and federal grant money to pay for the highway interdiction team, he said.

Leyba pointed to the Sept. 7 arrest of an alleged drug dealer in which the task force seized 22 pounds of fentanyl during “the campaign season,” he said. “That all of a sudden came up. What happened in the rest of the three years that it had been in operation.”

Regarding that case, the task force seized the largest amount of fentanyl in the county’s history, authorities say. A High Point man faces multiple drug charges in the case.

The task force confiscated $2.66 million worth of Fentanyl during its investigation, the agency said. The task force began in December 2020.

The sheriff’s office is not implementing the task force properly, Leyba said, adding that he was criticizing Kimbrough.

While not directly responding to Leyba’s criticism, Kimbrough pointed to the statistics gathered from January 2021 through August about the amount of illegal drugs seized by the task force.

The statistics show that the task force has seized a total of 2,552.34 pounds of illegal drugs, including cocaine, heroin, marijuana, methamphetamines and fentanyl. These drugs were valued at $106,857,025, the task force said.

In addition, Kimbrough said the creation of the task force fulfilled one of his 2018 campaign promises.

“As it relates to Mr. Leyba’s comment about me being behind the desk and not being in the community — that is simply laughable,” Kimbrough said. “I won’t engage in silliness and back-and-forth of inaccurate claims.”

Kimbrough said he routinely visits North Hills Elementary to serve as a volunteer and a mentor at the school.

Leyba said he hopes to attract Republican, Democratic and unaffiliated voters to his candidacy.

Your 2022 candidates: A recap of Journal election previews 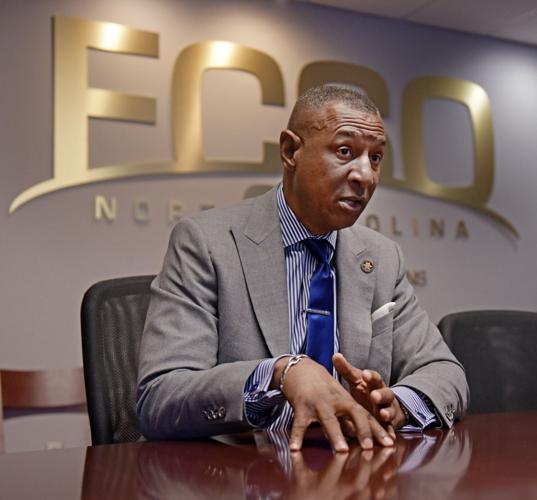 Sheriff Bobby Kimbrough talks about the initiatives that he has brought to the sheriff's department since first being elected in 2014. 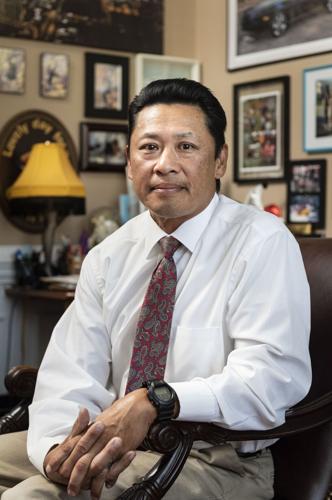