Local Democrats are upset over signs someone has placed beside some of their candidates’ signs that appear to launch attacks on the Democrats, but authorities are saying the signs are protected speech.

It was not immediately clear how many of the signs were placed, but examples sent to the Journal showed signs beside those of Democratic school board candidates Deanna Kaplan and Richard Watts.

The one beside Watts’ sign read, “Supports boys in the girls’ locker room,” while the one beside Kaplan’s sign read “Locked your children out of school.”

The signs bear no information on their origin.

The locker room comment appeared to reference controversies over gender identity that have roiled more than one school board. The comment about locking kids out of school seemed in reference to school closures during the COVID-19 pandemic.

In both cases, the signs were created with a white stencil typeface on a black background, with the statements written in capital letters. The signs did not mention the names of any candidate, but were placed right beside the candidates’ signs.

“This is an obvious intimidation tactic and an intent to mislead voters,” said Angela Levine, the second vice chair of the Democratic Party in Forsyth County, who said that the statements “are not about positions the candidates have taken, they are just lies about the candidates.”

Levine said that word has gone out from party headquarters for Democrats not to disturb the attack signs, so that no one can accuse them of removing them.

“We are not going to stoop to their level,” Levine said. “When we see those signs, we will move our candidate’s sign to another place. We are moving our signs to distance them from the false message.”

The locker room sign was by itself in the grass strip beside Martin Luther King Jr. Drive when a Journal reporter drove out to check. A while later, it appeared that the sign was near a larger one for Democrat Cheri Beasley, who is running for the U.S. Senate.

Kaplan, referencing the schools’ response to COVID-19, said the “priority was then and is now to keep our students, teachers and staff safe.”

“Everyone involved in that effort, from our custodian staff to our cafeteria workers to our bus drivers, teachers and administrators, should be recognized, not villainized, for what they did under extremely difficult and unpredictable circumstances,” she said in a text. “They are the heroes, and it is unfortunate that a few desperate individuals are trying to diminish what they did in these last few days before the election for political posturing. We need to keep politics out of our schools and focus on what’s important and that’s providing a safe and healthy environment in which every child has an opportunity to learn.”

Asked if she wanted to comment on the locker room sign, Kaplan referred back to her statement.

Attempts to reach Watts were not successful.

Tim Tsujii, the director of elections here, said the elections board has no enforcement over political signs.

“Those types of signs are protected by First Amendment rights, so we can’t remove those signs,” Tsujii said. “The board of elections does not have any enforcement authority.”

Tsujii said he was also asked whether the signs were required to bear a statement setting forth who is responsible for putting up the signs, but Tsujii said that’s not the case, “because it does not mention or state a candidate’s name.”

“Today is the first day that people have asked me about it,” Tsujii said. “I’ve gotten two or three calls.”

If a candidate has signs stolen, Tsujii said, that becomes an enforcement matter for police.

Chris Murphy, the director of planning and development services for the city, said the city “does not get into the content of any sign.”

“It is free speech,” Murphy said. “We always have a memo at the board of elections that talks about the size of the signs, where they can be and can’t be placed. Other than that, we are content-neutral on message. There is not anything where we would ever worry about what the message says.”

Levine said the statements on the signs are “meant to be fear-inducing, and they are consistent with the way that extremist groups have been acting all around our state and in other states,” — including some in Forsyth, she said, declining to name anyone she considers to be in that camp. 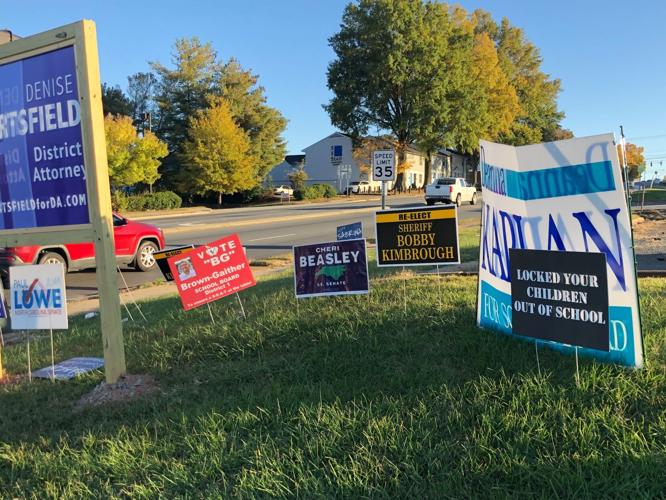 A sign beside Democratic school board member Deanna Kaplan’s campaign sign appears to attack her stance on the district's COVID-19 response. 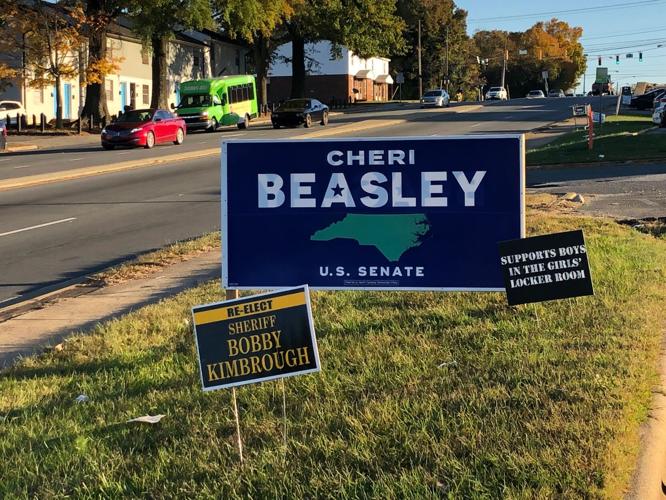