More than 5,300 Forsyth County voters cast ballots during the first day of early voting in the 2022 midterm election, with Kernersville leading the pace, and Lewisville and Clemmons not far behind.

Voters cast ballots at a steady pace on Thursday, election officials said, as people began taking advantage of 15 days of early voting in advance of the Nov. 8 general election.

While the county’s web page for determining how long voters had to wait showed many polling places had no waiting time, in the case of Kernersville that was deceptive: Tim Tsujii, the director of elections, said workers got so busy there they quit updating the information.

In western Forsyth County, wait times approaching 20 to 30 minutes were reported at times throughout the day in Clemmons and Lewisville. At Clemmons, the line stretched at times beyond the door at the Clemmons branch library.

But wait times were a lot shorter than some places have experienced in presidential election years.

“At least we have a long hallway so they don’t have to wait in the cold,” said Jeanette Lawson the lead election worker at the Clemmons Library. By 11:15 a.m., more than 200 people had voted in Clemmons.

At the end of the first day, 5,324 people voted, compared to 5,523 on the first day of the last midterm election in 2018. There were 846 voting in Kernersville, 725 in Lewisville and 594 in Clemmons. The lowest totals were at the Anderson Center at Winston-Salem State University, where 152 people voted,

In contrast to election day procedures, early voters can cast their ballots at any of the 12 polling sites regardless of where they live. When people check in to vote early, an election worker determined which ballot style the voter gets and prints it out right on the spot.

Different ballot styles are required because of how the county is split into various districts for representation on anything from U.S. Congress to the Winston-Salem/Forsyth County Board of Education.

Willa Redd, the lead election official at Mazie Woodruff Center on Lansing Drive, said around 1 p.m. that voting had been steady, even if lines had not formed. By 1:10 p.m., some 150 voters had cast their ballots at the center.

“Everything is going smoothly,” Redd said.

Michelle Bobadilla, the deputy director of elections here, said that the weather may have kept some people from voting as early as they might have done. Temperatures were close to freezing around sunrise, and stayed in the 40s through much of the early morning.

“It’s cold … so maybe they are trying to wake up a little later today,” she said. “But we still have lots of days to go for early voting, and I know it is going to pick up at some point.”

By late afternoon on Monday, temperatures had climbed into the low 60s. Tim Tsujii, the director of elections here, said the election was running smoothly, even in the busier polling places such as Kernersville. There were no significant equipment burps.

Polling places will be open from 8 a.m. to 7:30 p.m. on weekdays through Nov. 4. Polls will be open on two Saturdays and one Sunday later in the month but not this weekend.

As if underscoring the difficult access at the Government Center, on Thursday only 411 people voted there, compared to 678 in 2018

In Clemmons, Zane Winters and Marvin Cassada continued their tradition of voting together on the first day.

“Vote for Republicans to keep the woke Democrats off the ballot,” Winters said as he stood in line outside the polling place.

Virginia Halverson, voting in Clemmons with her husband Ron , said her main interest was “to make sure we keep our democracy,” and that she was supporting Democrat Cheri Beasley in the U.S. Senate contest.

“I think she’s the most qualified individual for it,” she said. Ron Halverson said he was interested in all the contests.

In addition to casting votes in the contest between Beasley and Republican Ted Budd for Senate, Forsyth County voters will be picking between incumbent GOP district attorney Jim O’Neill and Democrat Denise Hartsfield, a retired district judge challenging the incumbent for the post.

Voters will also weigh in on contests for U.S. House and lawmakers for the state senate and house.

And a crowded field for district and at-large seats on the Winston-Salem/Forsyth County school board is drawing public attention.

Other contests will fill judicial seats as well as slots from the county board of commissioners to the soil and water conservation board.

Calvin Smart, voting at Mazie Woodruff Center on Lansing Drive, wouldn’t say who he voted for, but did say that he likes to vote early to avoid the long lines on election day.

“I think (voting) is the most important privilege that we have as Americans, and it separates us from other countries because we have free and open ballots which cannot be taken away from us,” he said.

Rural Hall and King voters have the added attraction of a vote on alcohol sales. 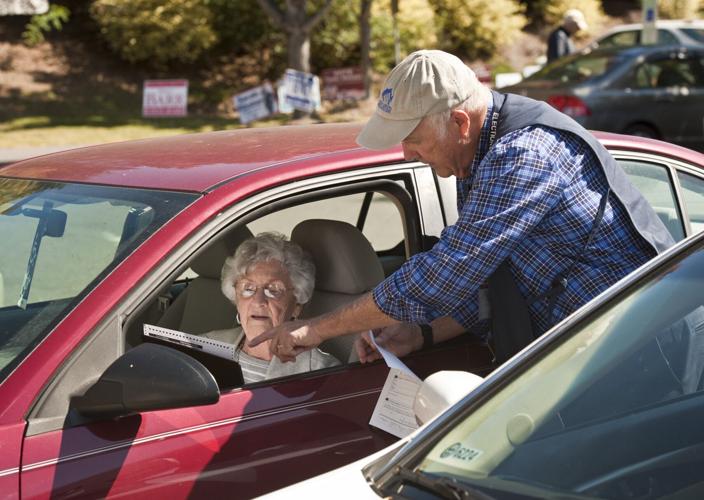 Poll worker Jay Parsons walks Barbara Hepler through the ballot as she takes advantage of curbside voting at Lewisville Library on Thursday. 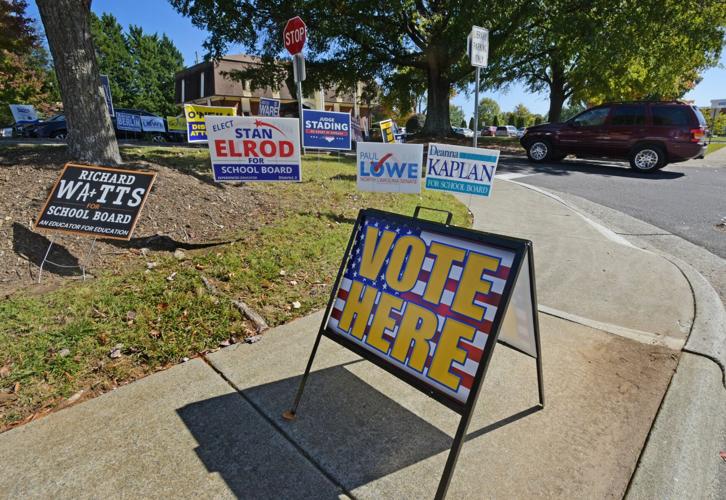 Campaign signs are posted outside the Lewisville Library early-voting site. 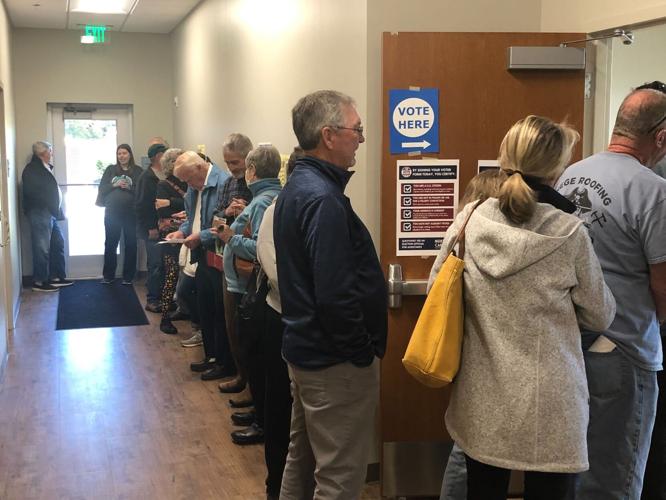 People line up for early voting in Clemmons on Thursday morning. 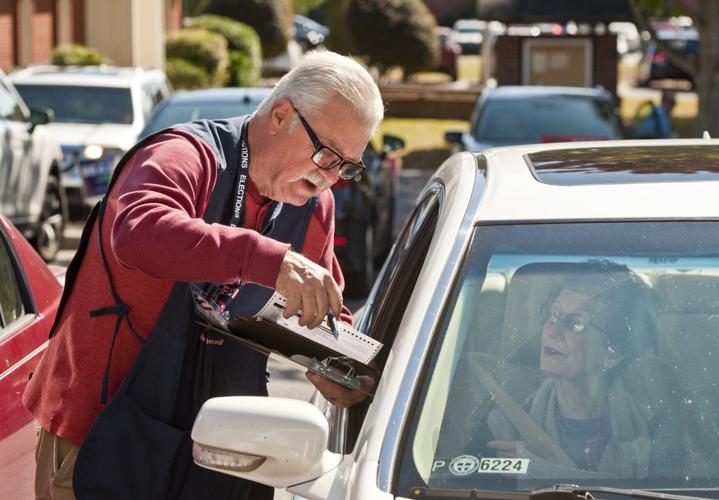