More than 1,000 abortion rights supporters protested Saturday throughout downtown Winston-Salem, loudly chanting “My Body; My Choice,” and "We won't go back" in the wake of the U.S. Supreme Court’s ruling that eliminated constitutional protections for abortion.

Saturday night's demonstrators initially gathered at Bailey Park on Patterson Avenue, where they heard speakers denounce the court’s ruling and urged the participants to vote in the November elections for candidates that support abortion rights.

“Abort the Court,” declared some of the slogans, and “Keep Ur Paws Off Our Drawers,” “We Will Not Go Back,” “Anti-Abortion Laws Kill Us. Stay Out of My Uterus,” and “Pro Life is a Lie When No Cares that Women Die.”

The protesters marched from Bailey Park to City Hall at 101 N. Main St., filling six city blocks at a time as they walked on Fourth, Liberty, Second and Main streets.

The rally and march were staged by Winston 4 Peace, a local social justice organization.

Quamekia Shavers, an adviser with the organization, said the protesters turned out to make their voices heard.

“Protest without action is useless,” Shavers said. “When it’s time to go vote, it is imperative that you are informed, that you educate your friends and family and you encourage them to come to the polls so your voice is really heard.

“Whether it’s in North Carolina or in Texas, it is an injustice,” Shavers said, referring to proposed bans on abortions in the wake of the court’s ruling.

Shavers said women control their bodies in spite of the court’s ruling.

House Speaker Tim Moore, Republican, has said that he will work to pass "pro-life protections" in North Carolina when the N.C. General reconvenes in January 2023.

“We have 18 seats to flip, and we need to make the whole state blue to protect abortion access,” said Day, who is running against State Rep. Jeff Zenger, R-Forsyth, in the November election.

As a mother by choice, Day said she has considered what the court’s ruling means for her daughter.

Voters need politicians who will do the right thing to uphold abortion access in the state, Day said.

Ana Wilson, a protester and a single mother, said she was distressed when she learned about the court’s ruling. Wilson considered getting an abortion three months into her pregnancy, but she decided to give birth to her daughter.

“I decided to be a mom,” Wilson said.

Organizers allowed about 20 protesters from the crowd to speak to the demonstrators at Bailey Park.

Some female protesters talking about the hardships they have endured by giving birth to their children and their decisions to undergo abortions to protect their health.

The decision by the court's conservative majority toppled the 49-year-old landmark abortion rights ruling and is expected to lead to abortion bans in roughly half of the nation's states.

The demonstrators pointed signs at the drivers traveling east and west on Salem Parkway beneath the bridge.

Their signs read, "Vote out GOPs," "Unapologetically Pro-Choice," "We Can't Go Back," My Body; My Choice," "Their Bodies; Their Choice," "I Dissent," and "Bad Laws Turn Good People Into Criminals."

A sign posted on the fence above the bridge proclaimed, "Keep Your Hands Off My Uterus."

Saturday's local protest coincided with demonstrations from abortion-rights supporters in Washington, D.C., and other U.S. cities.

Leslie Vance of Loretto, Tenn., was visiting Winston-Salem to attend a family reunion and decided to take part in the protest.

"No matter what you believe about abortion and when life begins, you still should be pro-choice," Vance said.

Katlyn Proctor of Winston-Salem, who helped organize the demonstrations, said she supports health care for all people.

"I'm out here today because it is important not to be silent during this important time in history," Proctor said.

Some drivers on Salem Parkway honked their horns as vehicles passed under the protesters. The loudest honking noises came from drivers of tractor-trailers and smaller trucks on the highway.

One passing driver yelled "bulls***," to the demonstrators.

"I was a teenager in the 1970s, and I remember the news about girls using coat hangers and Clorox, killing themselves," said LeAnne Teske of Clemmons, a protester on hand Saturday. "We can't go back."

Her husband, Mike Jeske, said he is "upset that the court is taking away another right that is important to women."

"I want my grandchildren to have the same rights I did have," said Garlichs, who is staying in Winston-Salem for the rest of June for the family reunion.

Three of Garlichs' grandchildren are girls, she said.

Susan Carlisle, a Winston-Salem native who lives in Los Angeles, said abortion rights are an important issue for her.

"I didn't think I would live to see the day when the Supreme Court started taking away our rights," said Carlisle. 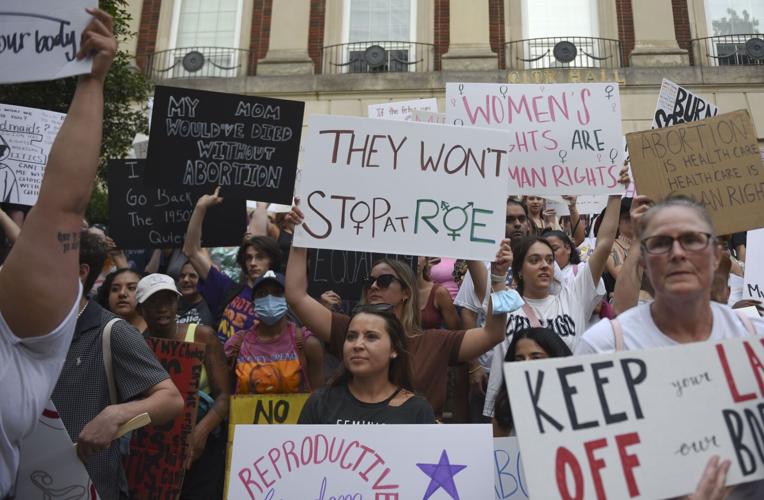 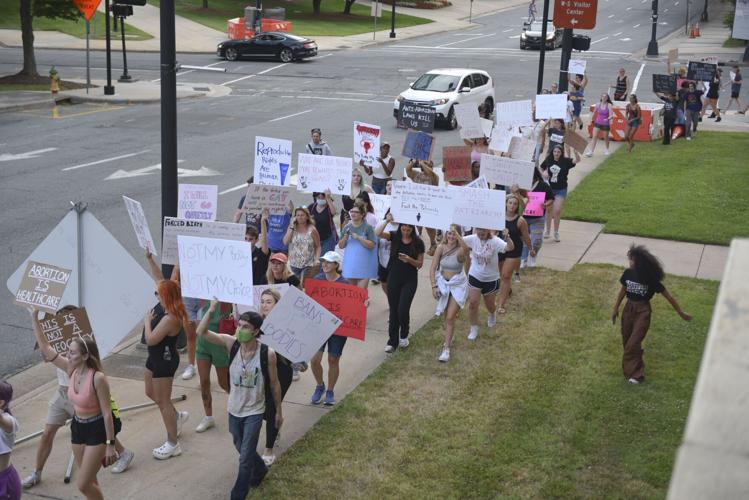 Abortion rights advocates march Saturday in Winston-Salem in opposition to the Supreme Court ruling that ended the constitutional right to abortion in the United States. 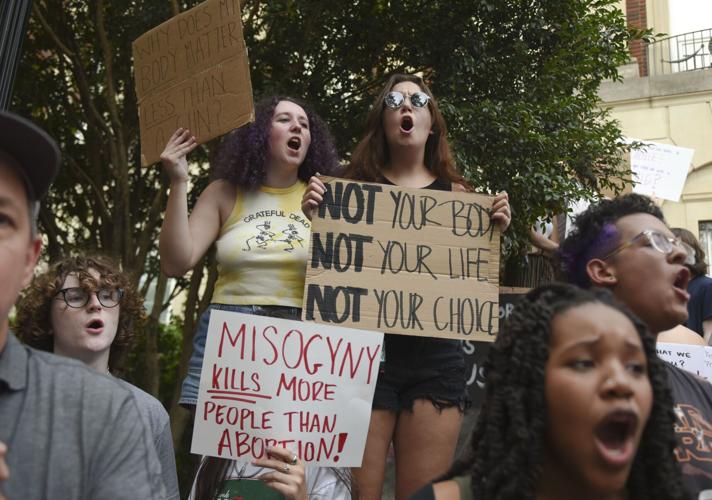 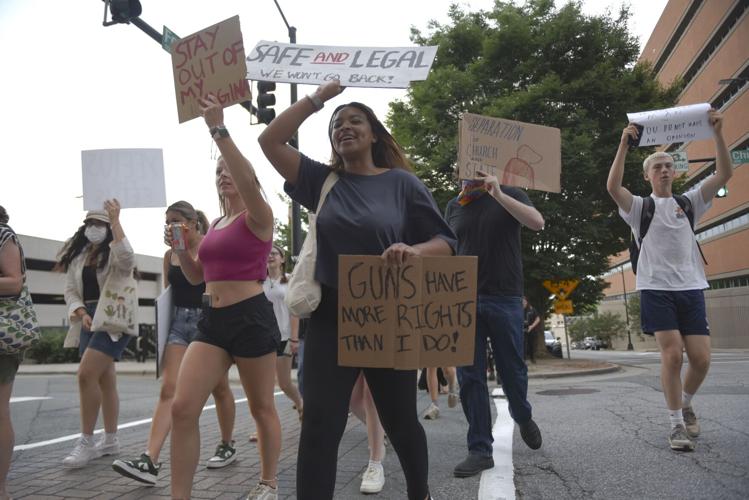 Supporters of abortion rights took to the streets of downtown Winston-Salem on Saturday in the wake of the Supreme Court ruling that overturned Roe v. Wade. 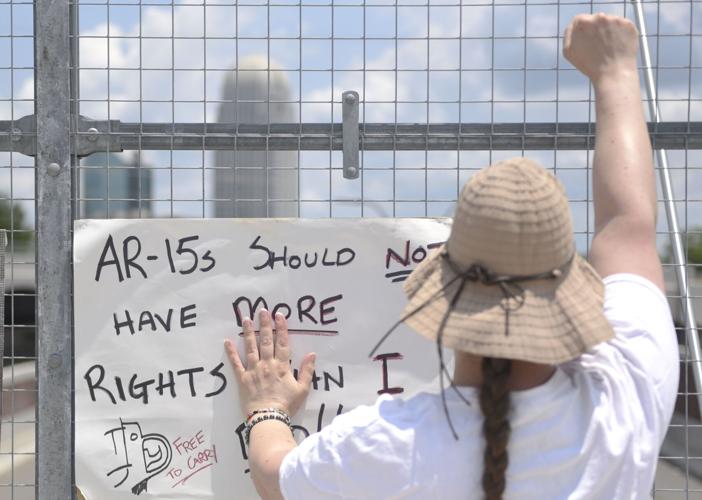 Trescha Miller holds up a sign at the abortion rights protest on the Green Street pedestrian bridge on Saturday in Winston-Salem. 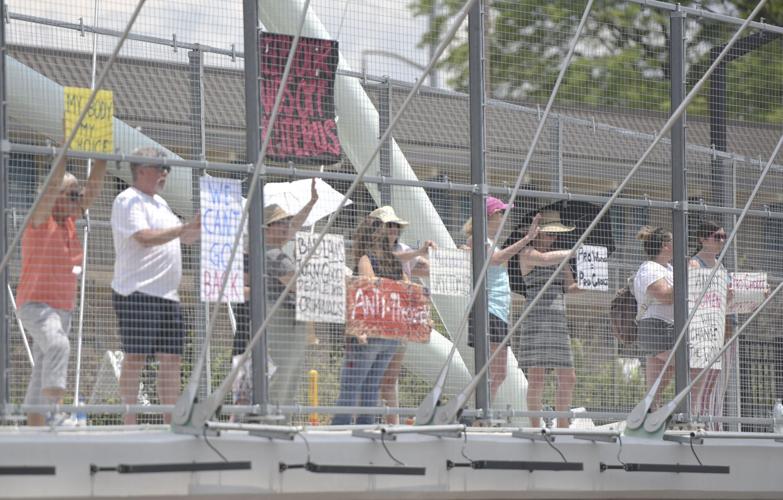 Protesters hold signs at the abortion rights protest on the Green Street pedestrian bridge on Saturday. 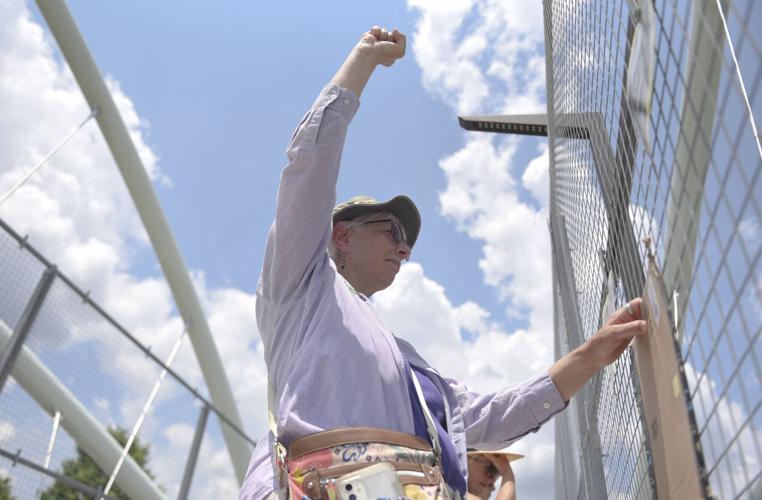 Mary Michael Garlichs holds up a sign and a fist at the abortion rights protest on the Green Street pedestrian bridge.