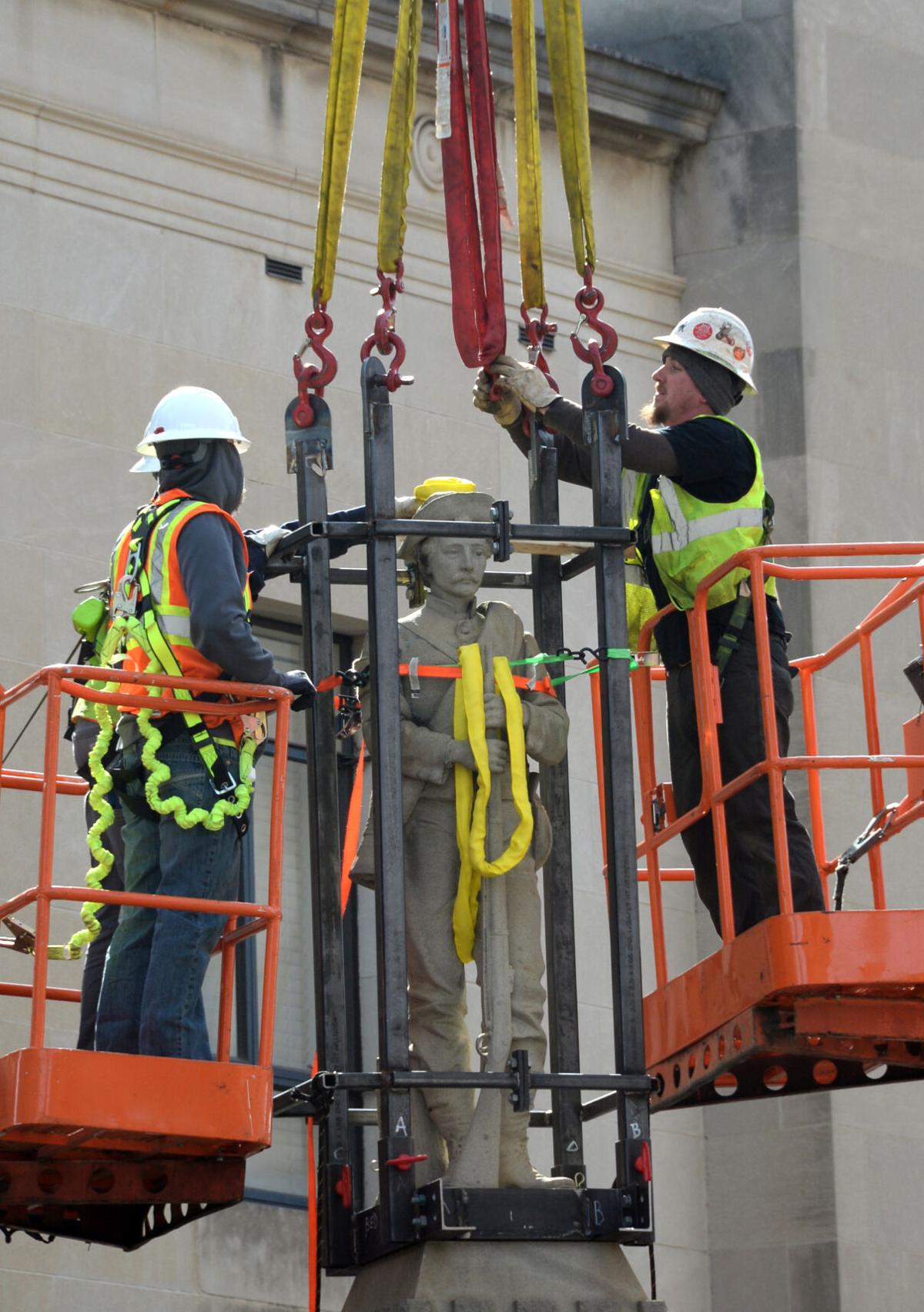 Workers secure a crane's rigging to a protective support structure surrounding the top portion of the Confederate monument as they prepare to remove it from the corner of Fourth and Liberty streets March 12, 2019. 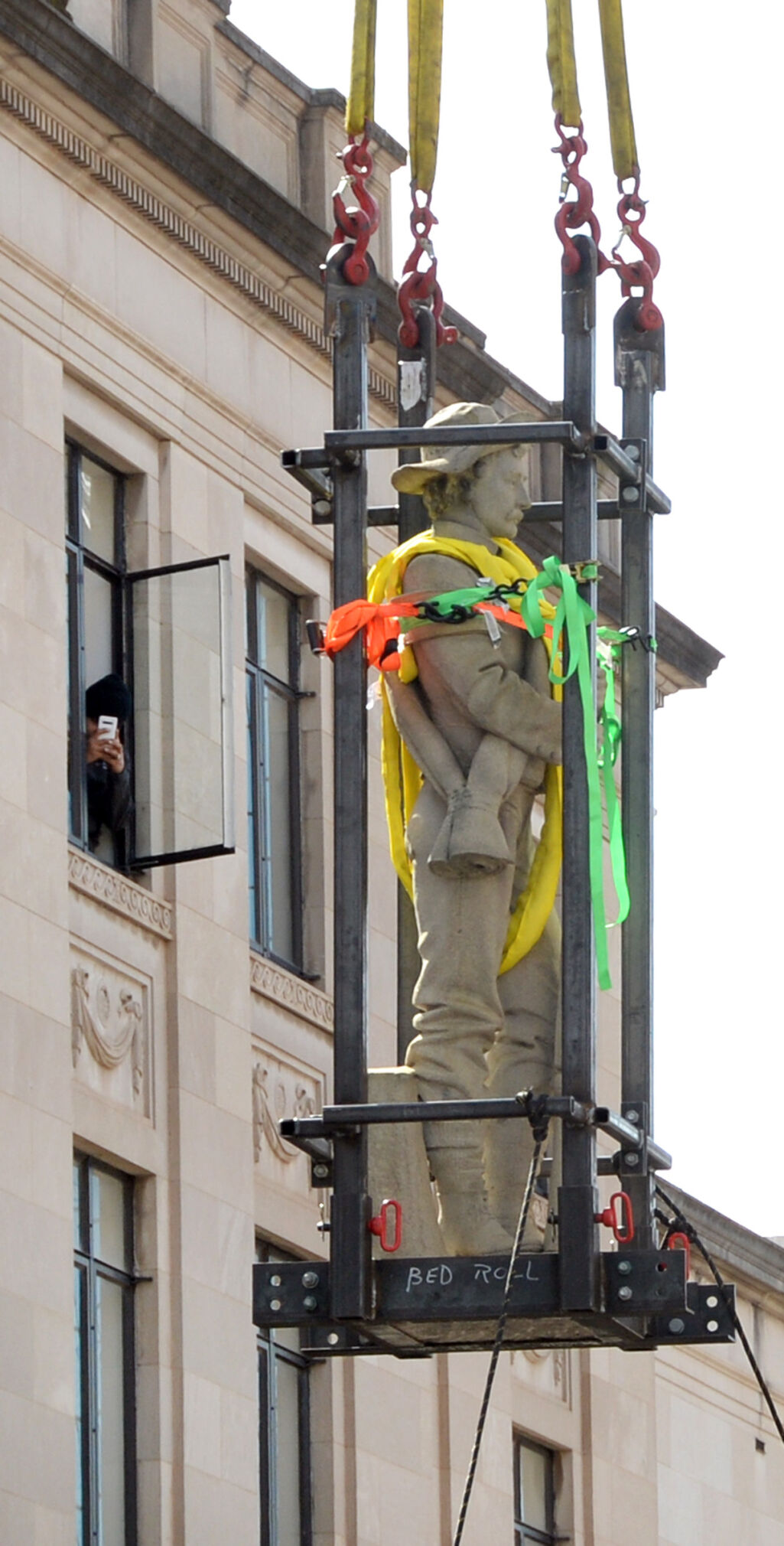 A resident of 50 West Fourth, the former Forsyth County Courthouse, shoots video as the Confederate statue is removed from the corner of Fourth and Liberty streets on March 12, 2019.

The state division of the United Daughters of the Confederacy announced Thursday that it is appealing to the state Supreme Court the recent decision of the N.C. Court of Appeals that dismissed the UDC bid to have a statue of a Confederate soldier returned to the corner of Liberty and Fourth streets in downtown Winston-Salem.

Sara Powell, president of the UDC's North Carolina Division, issued a statement saying that both the split decision on the appeals court and the UDC's interpretation of the state law on monuments give grounds for the appeal.

"We believe that the General Assembly intended for memorials to be protected, and we wish to see the law enforced," Powell said.

Citing public-safety concerns, Winston-Salem had the monument removed on March 12, 2019, and placed in storage. City officials say they ultimately want to place the statue in privately-owned Salem Cemetery, but are waiting for any legal challenges to play out first.

Statues of Confederate soldiers have come under fire from protesters in recent years as symbols of white supremacy, although defenders maintain the statues are meant to honor dead soldiers.

The state division of the UDC on Jan. 31, 2019, sued the city, Forsyth County and the owner of the former courthouse where the statue stood in an effort to prevent the removal of the statue.

That lawsuit was dismissed by Forsyth County Superior Court Judge Eric Morgan on May 8, 2019. Morgan said in his order that the UDC lacked what is called standing: That because the UDC had not asserted ownership of the statue or concrete injury in the statue's removal, it had no right to sue.

The UDC appealed that decision to the N.C. Court of Appeals, which in a 2-1 decision on Dec. 15 found no error in Morgan's 2019 ruling.

In his dissent, Tyson said the UDC doesn't have to show sole ownership of the statue to have a stake in the case, and notes that the city had repeatedly identified the UDC as the statue's owner by sending the group notice that it had to remove it.

Tyson goes on to say that because the statue's ownership appears uncertain, it could be treated as unclaimed property and therefore, under state law, owned by the state.

Tyson said the statue could also be seen as covered by a federal law that protects veterans' memorials. At any rate, he argues, the city didn't follow requirements to give notice, set a hearing before removing the statue, or meet other requirements of the law.

The UDC sees Tyson's dissent as concluding that state law protects the monument and that it is owned by the county.

In his dissent, Tyson also blasted the city for "unlawfully" declaring "the memorial to dead and wounded veterans from Forsyth County to be a public nuisance" as well as going on to remove the statute without, Tyson said, following procedures set out in law.

The UDC's notice of an appeal comes about two years after Winston-Salem Mayor Allen Joines announced on Jan. 1, 2019, that he had written a letter to the UDC directing the removal of the statue.

Lt. Gov. Mark Robinson stood in front of his office Tuesday afternoon and said he is the target of hate and vitriol because his comments about…

Adams is the principal owner of the Law Offices of Frederick B. Adams, P.C. Before that, he practiced law at Crumley & Associates, P.C. and Womble, Carlyle, Sandridge & Rice LLP

Besse to run against Kaplan

Dan Besse, a former member of the Winston-Salem City Council, will run next year for the at-large seat held by Forsyth County Commissioner Ted…

Workers secure a crane's rigging to a protective support structure surrounding the top portion of the Confederate monument as they prepare to remove it from the corner of Fourth and Liberty streets March 12, 2019.

A resident of 50 West Fourth, the former Forsyth County Courthouse, shoots video as the Confederate statue is removed from the corner of Fourth and Liberty streets on March 12, 2019.