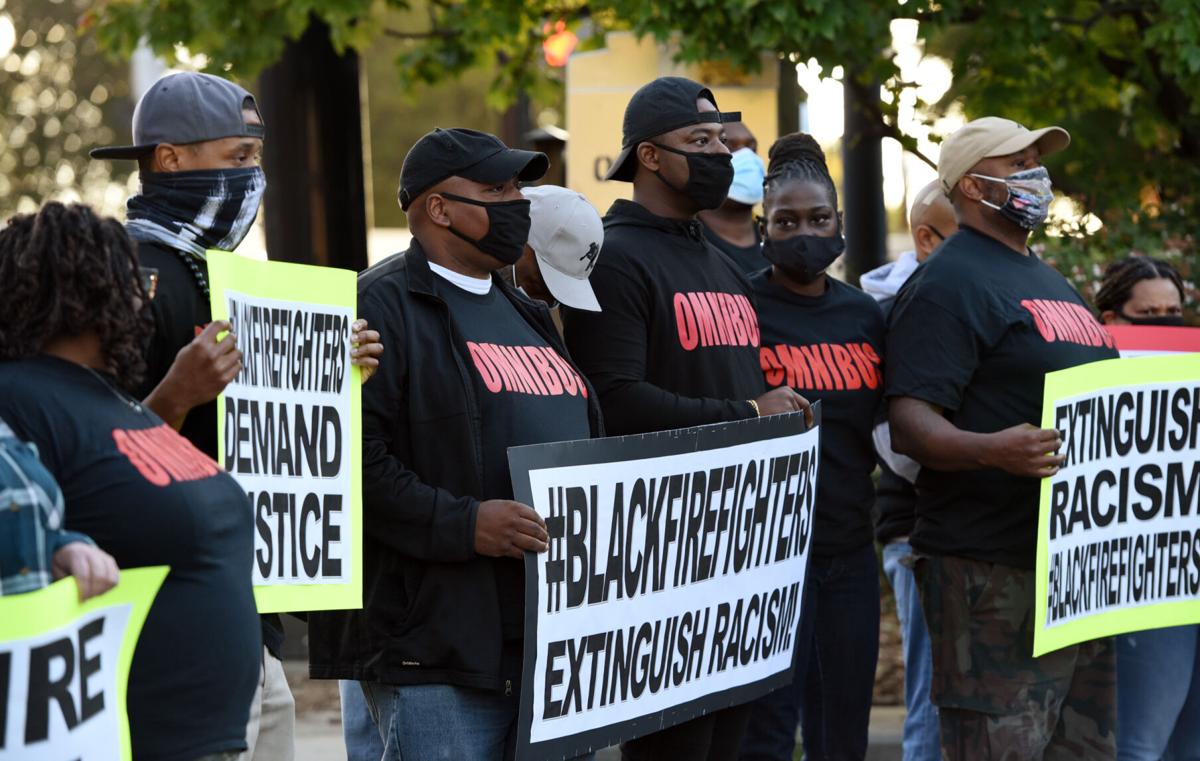 Winston-Salem firefighters and their supporters stand behind a speaker during a Omnibus black firefighter press conference in September. 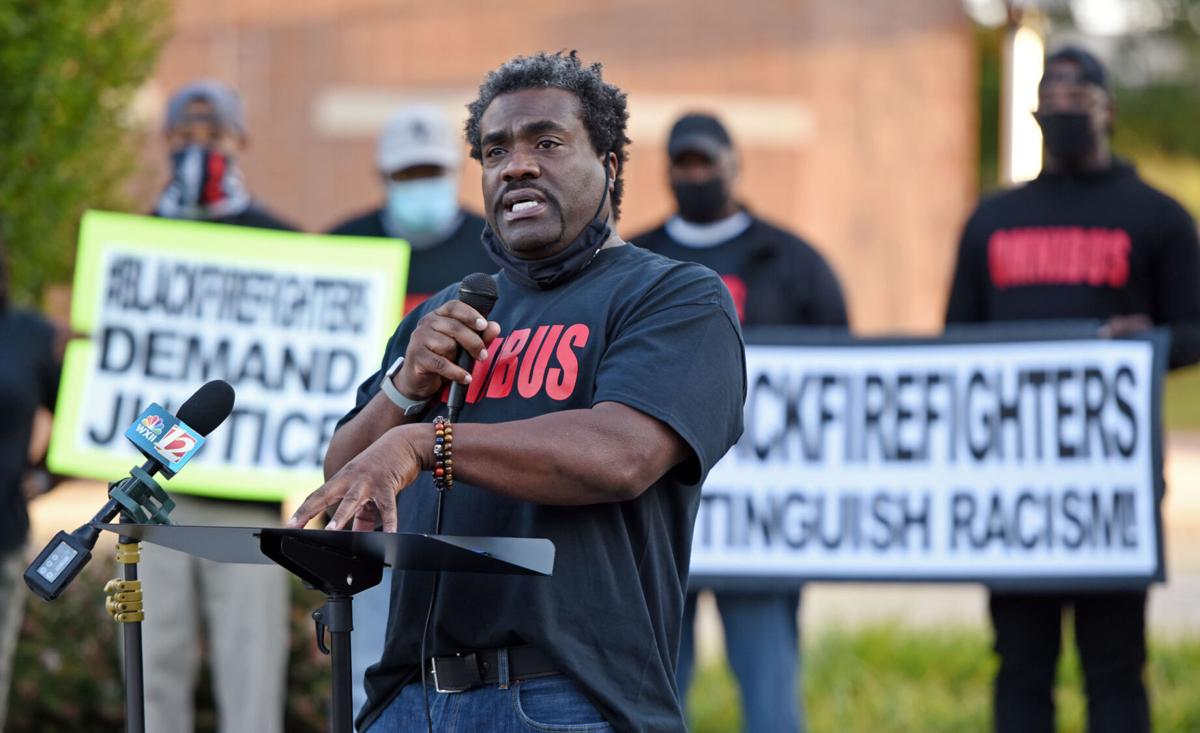 Consultants hired to look at the Winston-Salem Fire Department have concluded that while the department as a whole is not a racist, allegations of individual acts of racism and discrimination show a need to better train firefighters to deal with diversity.

The city commissioned what's being called a "Climate Assessment" after a group of Black current and former firefighters calling themselves Omnibus began protesting conditions in the department.

The assessment, produced by WPR Consulting LLC, involved interviews with more than 100 members of the WSFD, including 20 captains, 20 engineers, 60 firefighters, Chief William "Trey" Mayo, his administrative team and other fire department employees.

The meetings took place between Oct. 12 and Dec. 15. The consultants also met with Omnibus and other groups including Hate Out of Winston, the Urban League and the NAACP.

The city paid $20,000 for the study, which was not shared with Omnibus before being presented at Monday's Winston-Salem City Council meeting.

Thomas Penn, one of the more prominent members of the Omnibus group, said in advance of the release of the report that he hopes it would "fall in line with the things we are presenting to them."

The consultants said that while some community groups expressed the belief that Mayo is racist, none of the more than 100 personnel interviewed from the department shared that concern in group meetings.

Here are some of the key findings from the report:

* On the other hand, many fire personnel, both Black and white, said they didn't know there might be a racial problem until the Omnibus complaints hit the media. One Black male said he had never come across racism, and other Blacks said the Omnibus group didn't speak for them.

* Racial and cultural tensions in the department exist, the consultants found, in part because of the different backgrounds of white and minority employees.

Putting them together sometimes results in a culture clash, the consultants found.

"Some of the white guys have never been around Black people," one said. Another said "we have an issue with ... unintentional bias because of our differences. A lot of these guys are young. They don't live in our community. They haven't had as much exposure or experience with people who don't look like them. There can be turmoil and conflict due to a lack of understanding."

Last July, when the Omnibus firefighters made their charges, they made complaints about incidents of hazing that included spitting tobacco juice into their boots and the placement of a gorilla-head costume on a desk.

It was harsh comments on social media by some white firefighters that drew much of the ire of the Omnibus firefighters, especially in connection with Black Lives Matter protests last summer.

The Omnibus group has demanded the dismissal of Mayo and some other fire officials, and the right to name who would investigate its claims of racist behavior in the department. Penn said Monday that while Omnibus has no faith in the city's processes, "if they surprise us that would be great."

"We are trying to be optimistic about whatever it is they will discover," Penn said. "As a whole, the Winston-Salem Fire Department is an an awesome place to be."

In a grievance they filed with the city, the Omnibus firefighters said fire captains had made comments on social media about turning loose dogs onto protesters, or in one case failed to denounce a non-employee who posted that protesters should be sent "back to Africa."

The Climate Assessment says that social media posts have caused racial tension, and recommends that the city revisit and strengthen its policy on what firefighters can post on social media.

The consultants said that many employees feel there is not enough accountability among employees: In other words, people ignore inappropriate racial behavior when they witness it.

A problem many employees cited was a practice of not dealing directly with an employee who has dome something offensive, but sending "an email or communication to the whole department or division about the need not to do what the offending party had done."

Many Black employees said Blacks were more severely punished for breaking departmental rules than their while counterparts, although some whites said there was a case where a Black staffer committed an offense calling for termination, but that the employee kept his job.

The Winston-Salem Fire Department and Mayo do get kudos from the consultants for promoting Blacks to positions of responsibility. Under Mayo:

* Rescue 1, a company with higher-level training, got its first Black captain.

* Four of six safety and training captains are Black, and the department's first and only graduate of the National Fire Academy's Managing Officer Program is Black.

* The first two Blacks in departmental history have been credentialed as chief fire officers, and Blacks make up 55% of the department's senior staff.

Blacks are only 13% of fire captains, 19% of fire engineers and 21% of firefighters.

One result of a lack of diversity among the front-line firefighters is that single-race shifts sometimes occur. The consultants say more should be done to make sure shifts are integrated, while at the same time better explaining to people in the community why that isn't always possible because of the department's racial makeup.

The city should do more to encourage diversity in hiring, the consultants say.

The consultants say that a "diversity, equity and inclusion" plan need to be formulated by the city to give bias training to employees, come up with ways to address allegations of racism and figure out how to measure progress.

Beyond that, many of the recommendations speak to efforts involving the input of people in the community: For instance, hiring fire and life safety educators who would take the lead on building relations with the larger community.

The consultants say the city should partner with the schools to create programs that can lead to firefighter certification and develop an anti-hazing policy, among other recommendations.

Way back in the beginning, before COVID-19 even had a widely recognizable name, scientists and other interested parties looked on in amazement…

The city manager, council and members of the Citizen Police Review Board would get the right to view police body camera footage, under one of …

Faced with the potential loss of the Dash, Winston-Salem is poised to ink a new lease with the minor-league baseball team that will make a maj…

Winston-Salem firefighters and their supporters stand behind a speaker during a Omnibus black firefighter press conference in September.