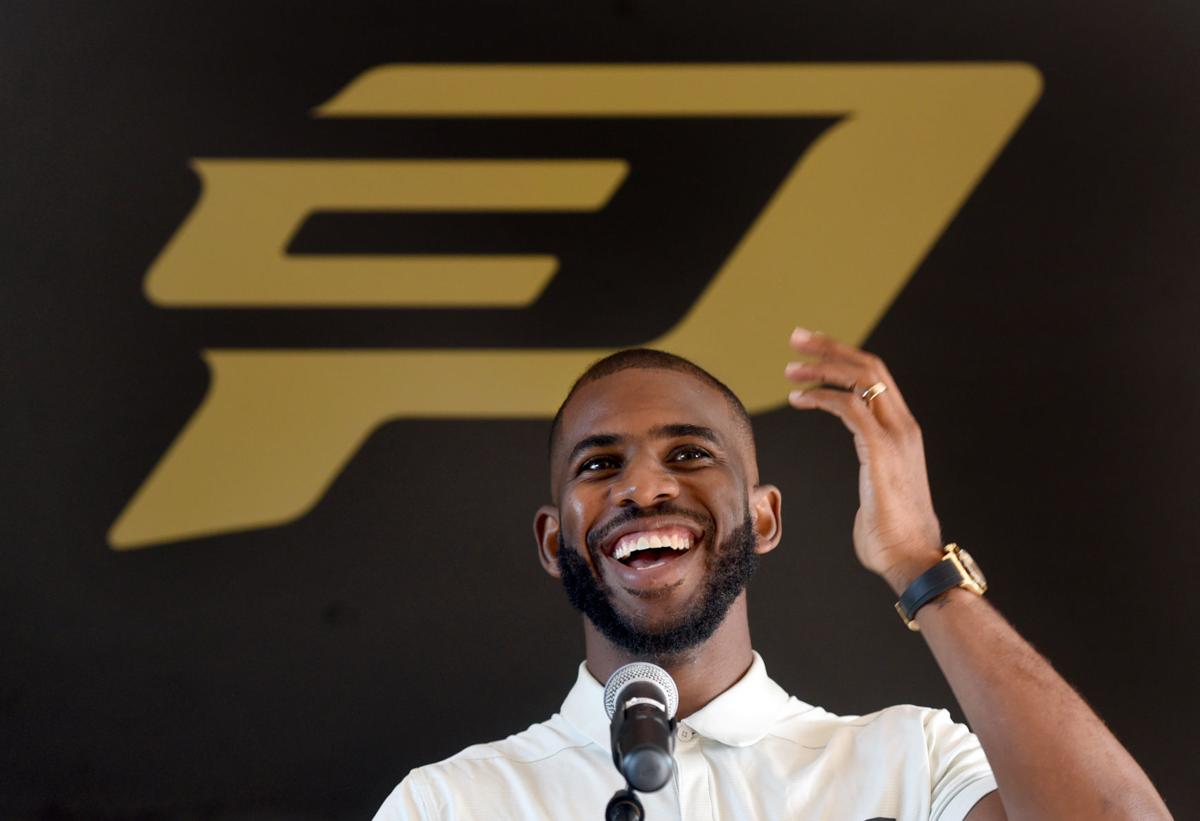 Chris Paul makes comments during an announcement at Old Town Club that he is donating $2.5 million to the university for an expanded basketball clubhouse, locker room and nutrition center. 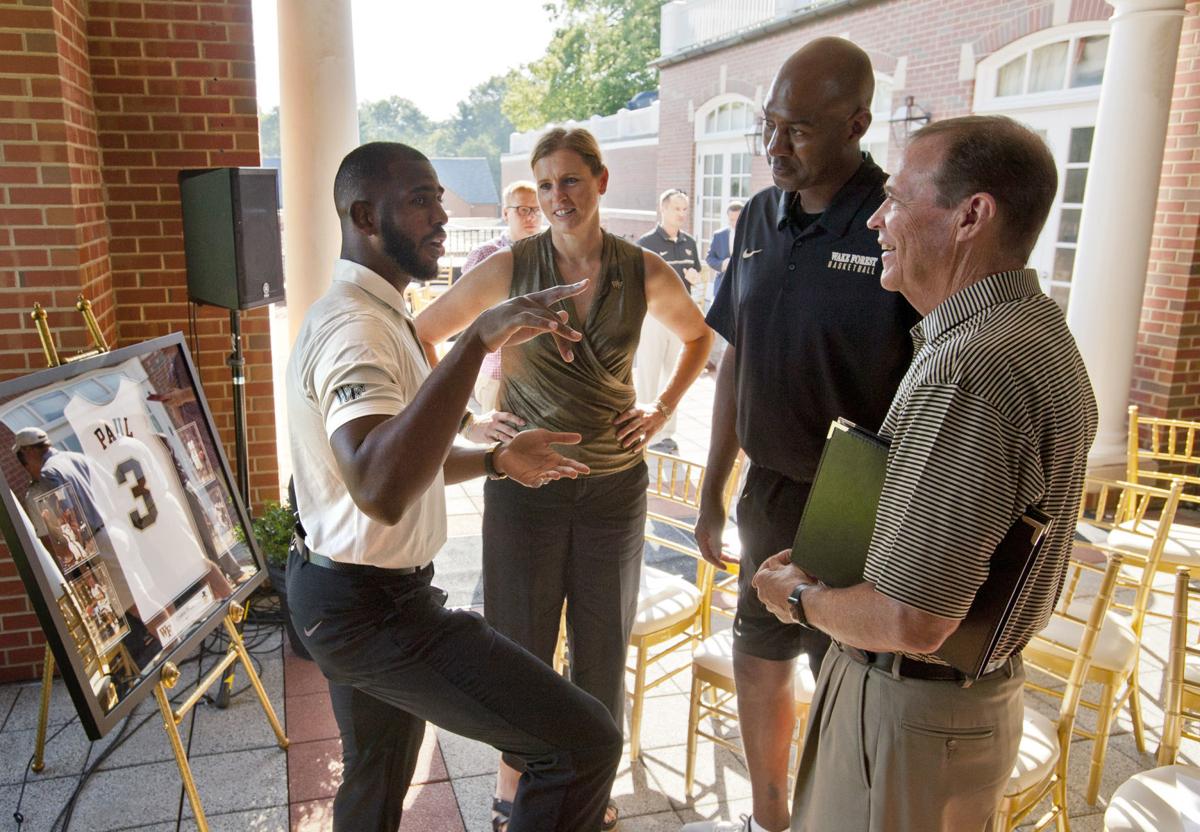 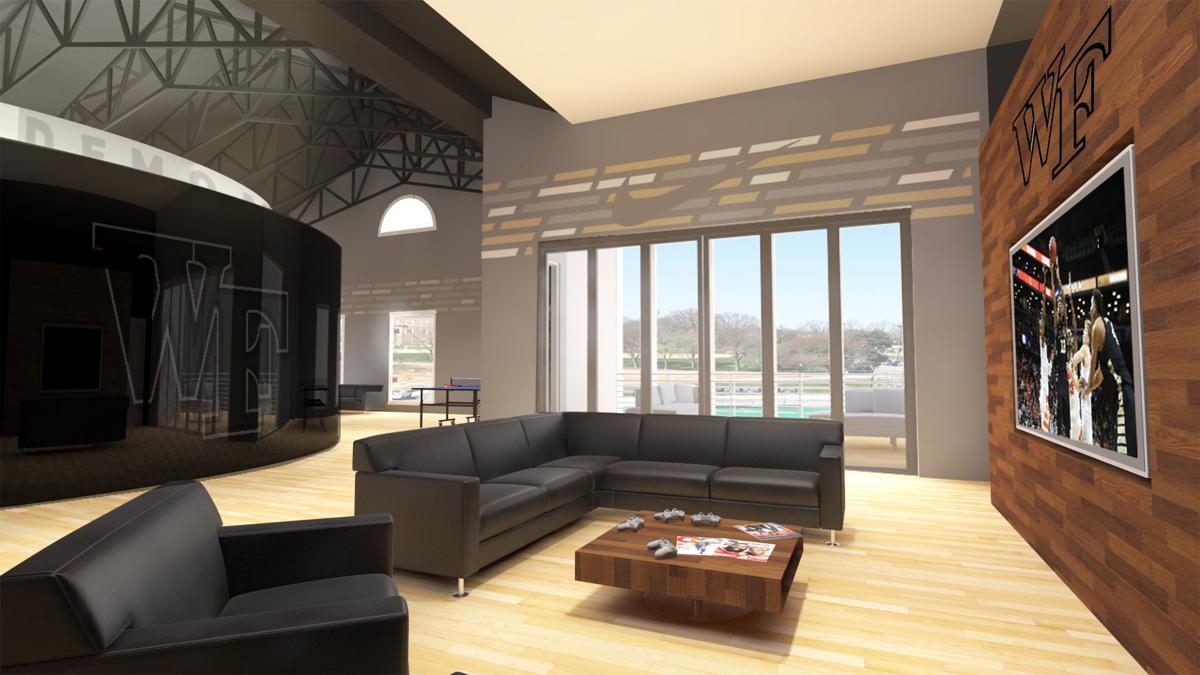 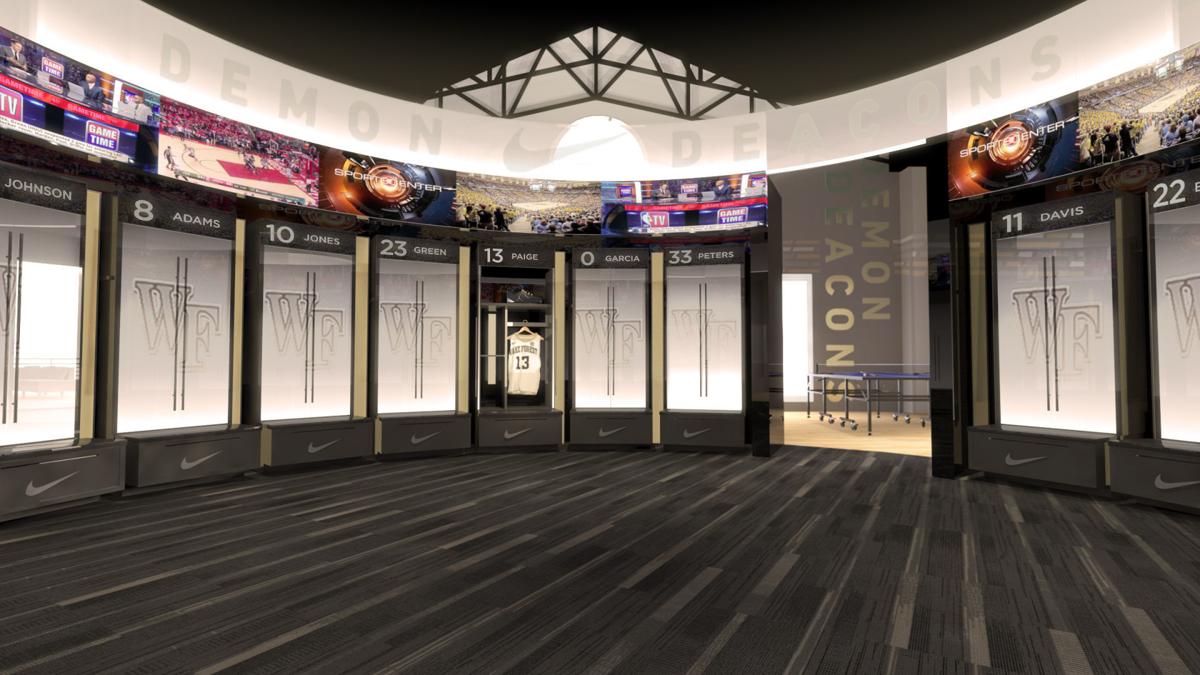 An artist’s rendering of how part of the Chris Paul Locker Room will look at Wake Forest University. 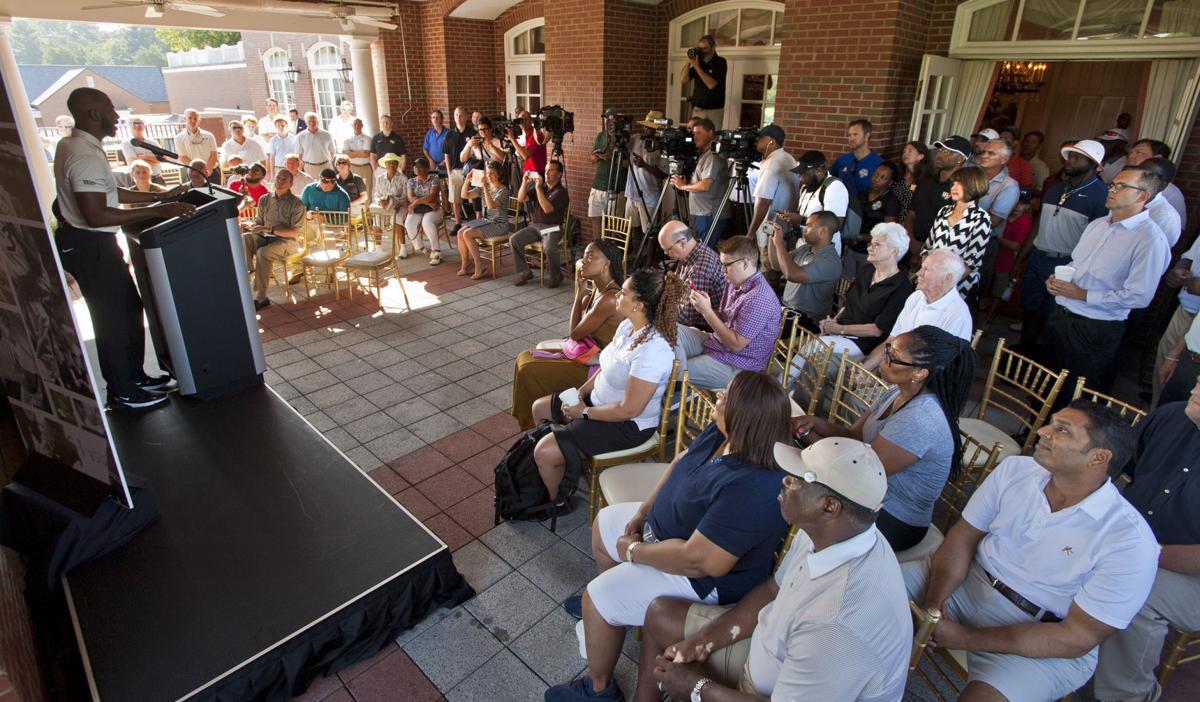 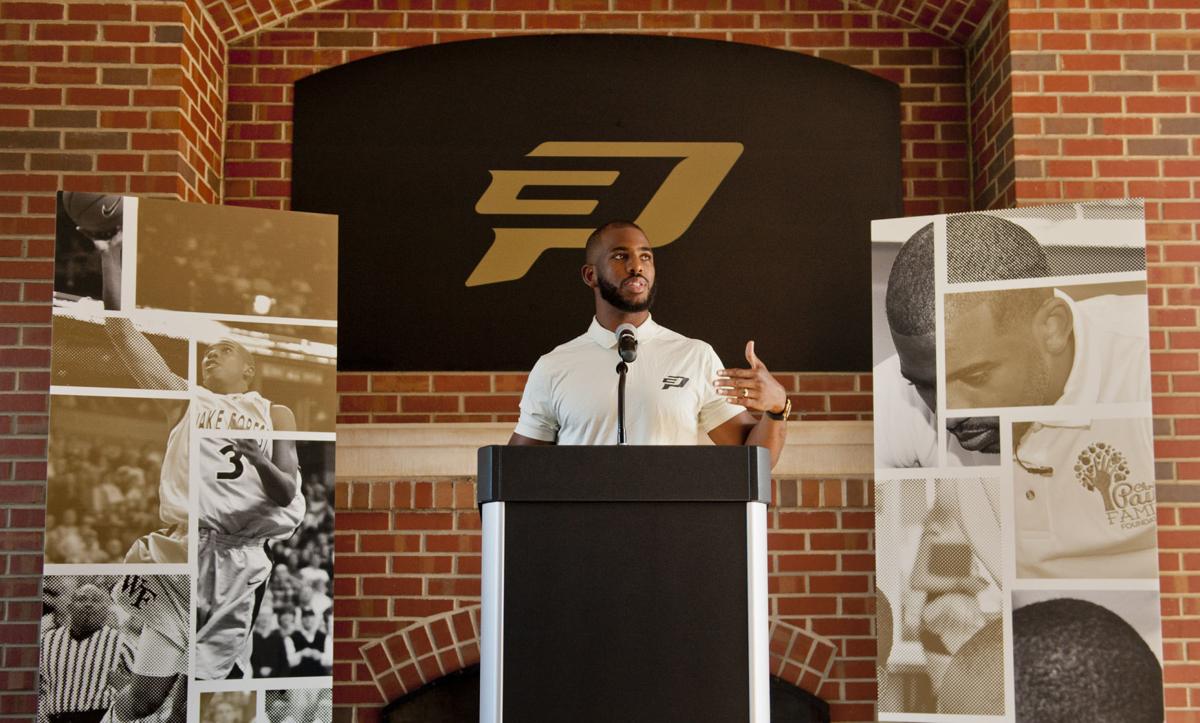 Chris Paul’s opening statement Tuesday morning for his foundation’s golf tournament fundraiser included the former West Forsyth and Wake Forest star saying, “this is home for me. It’s always been home and always will be.”

After the announcement he pledged to give Wake Forest’s basketball program $2.5 million, his exclusive time with the Journal ended with him quoting a Drake line.

“I think Drake said it best in a verse; he said, ‘Hardly home but always reppin’,’” Paul said.

Wake Forest announced Tuesday morning that Paul is donating the money to the school’s basketball program. It will be used to transform the men’s and women’s basketball clubhouses next to the Shah Basketball Complex, which is still under construction and expected to be finished in 2019. The men’s basketball locker room will be called the Chris Paul Locker Room.

The enhancements will be seen with expanded locker rooms, nutrition resources and treatment areas.

“It will be a bonding place, it will be a nutrition opportunity,” Athletics Director Ron Wellman said. “All of the resources that you want your basketball players and all of your athletes to have will be available to those players, because of Chris’ generosity and what we will build as a result of his pledge to our basketball program.”

It’s the largest donation by a former Wake Forest basketball player, and also the largest of any alumnus under the age of 35. Paul is 33 years old and 13 years removed from his last game as a Deacon, but he fondly remembers the time he spent forging bonds with teammates.

“Some people who go away to college, or maybe do something, somewhere where they’re never going to visit,” Paul said. “But this is home. This is home. And always will be, and I think about how much, you know, was done for me and for my family.

“And I also have a scholarship that’s endowed, that goes to Wake year in and year out, so why not add this piece?”

The efforts to involve Paul in the project started when his Houston Rockets team visited Atlanta in early November and when the Wake Forest men’s golf team played its first tournament of the spring in Houston.

When Paul was on the Atlanta trip, Wake Forest booster and Hawks part-owner Mit Shah picked up Paul for what turned into a roughly three-hour breakfast. It is, after all, Shah’s name that’s going on part of the soon-to-be-completed building because of his $5 million donation.

“Mit came and picked me up from my hotel, and we rode over to look at the Hawks’ new practice facility,” Paul said. “We sat down and, basically over a smoothie and breakfast, we talked. The way that I love Wake and the passion that I have for it, Mit has that and more, if that’s possible.”

The Deacons’ men’s golf team was in Houston for the All-American Intercollegiate tournament from Feb. 16-18. Around that time, Wake Forest senior associate athletics director Barry Faircloth visited Paul to talk about the project.

“Barry came down, and he sort of showed me the plans that they had for the locker room and all that different stuff,” Paul said. “And all I could think about was, ‘It doesn’t feel like I’ve been gone for 13 years.’ Because when I went to school, the Miller Center and all that stuff over there was practically new.”

Paul spoke of the difference between NBA and college locker rooms, of how when practices end in the NBA, players leave the facility.

“The NBA, when practice is over, guess what? Everybody leaves. Gone,” Paul said. “When you’re in college, you’re really part of a brotherhood. When I played on the basketball team, you really don’t have time to pledge a fraternity and all that stuff. We are our own fraternity and that locker room is our house, our fraternity house.”

Williams was on campus last month to practice with the alumni team Wake The Nation. So Williams saw the construction and the plans for what would be coming, and that was before Tuesday’s announcement.

“I was jealous, I was very jealous. I’m not going to lie,” Williams said with a laugh. “Because all we had were the wooden lockers with our posters above our locker, and we thought that was like, amazing. We thought we done made it to the next level.

And Williams remembers the same thing as Paul, the bonds created in collegiate locker rooms, and is excited that future Deacons will experience such things in a state-of-the-art space.

“Not only just the jokes — the times we wanted to fight each other, like brothers do. Me and Chris got into it, we fixed it right after and just went back to being brothers,” Williams said. “It was just a literal brotherhood, and it was the best four years of my life.”

Josh Howard didn’t have to travel as far as Williams, but the Winston-Salem native and coach of Piedmont International University reflected on the impact the Miller Center had on the Deacons since he was there when it was opened.

“I think when we got that locker room, it actually made us come together even more,” Howard said. “For Chris to do that and to kick-start us off again is going to be an awesome thing.”

It will take at least several weeks for the Forsyth County Department of Public Health to clear a backlog of about 50,000 people ages 75 and u…

Chris Paul makes comments during an announcement at Old Town Club that he is donating $2.5 million to the university for an expanded basketball clubhouse, locker room and nutrition center.

An artist’s rendering of how part of the Chris Paul Locker Room will look at Wake Forest University.