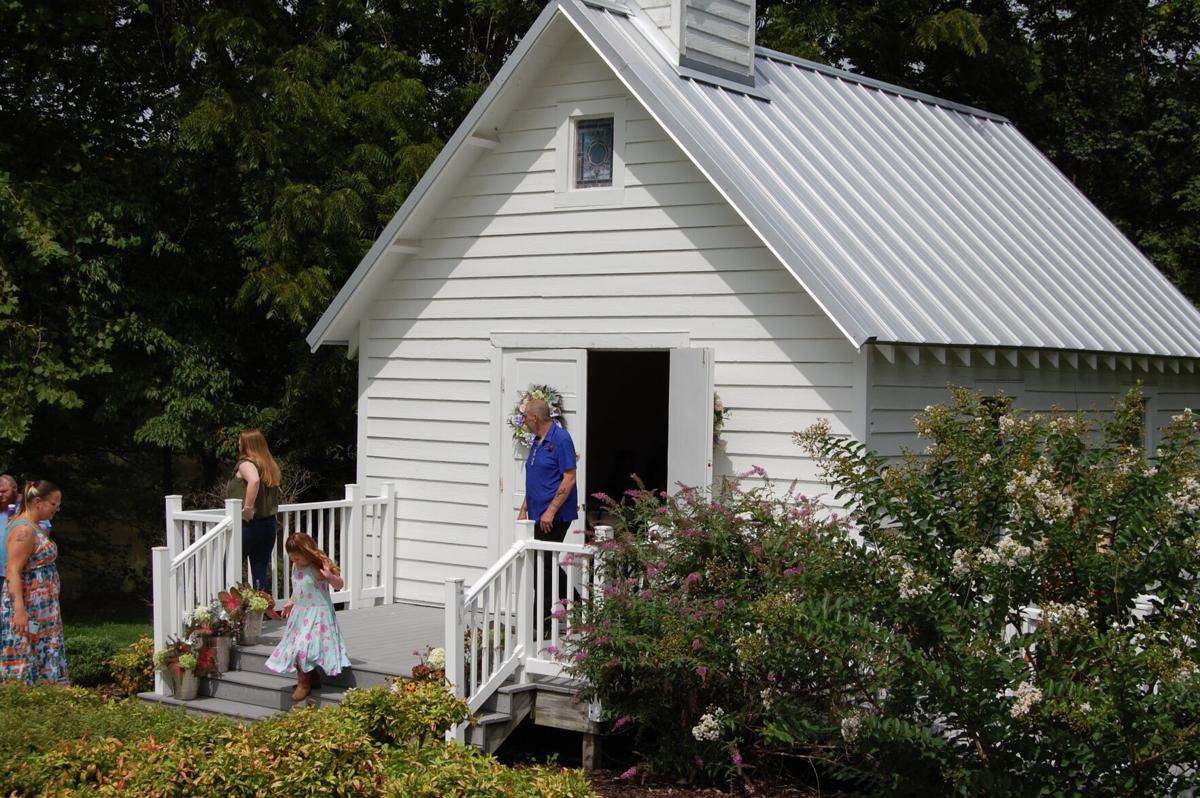 Nick Garner, 48, stands in front of the chapel at Hagan-Stone Park in Pleasant Garden on Saturday before getting married. 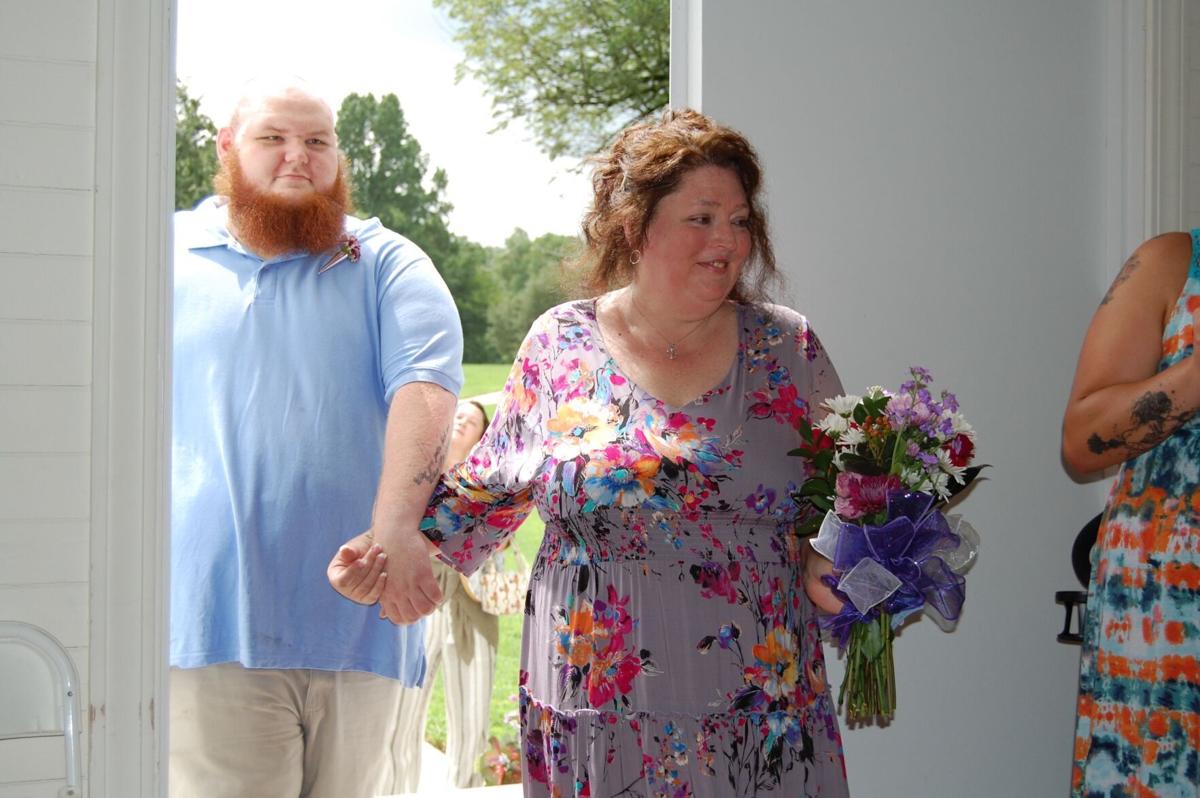 Melissa Ward, right, is walked down the aisle by her son, Cameron Ward, on Saturday. Ward, 46, reconnected with former classmate Nick Garner, 48, and they both had the idea to propose around the same time. She asked the question first, but he already had a ring ready. 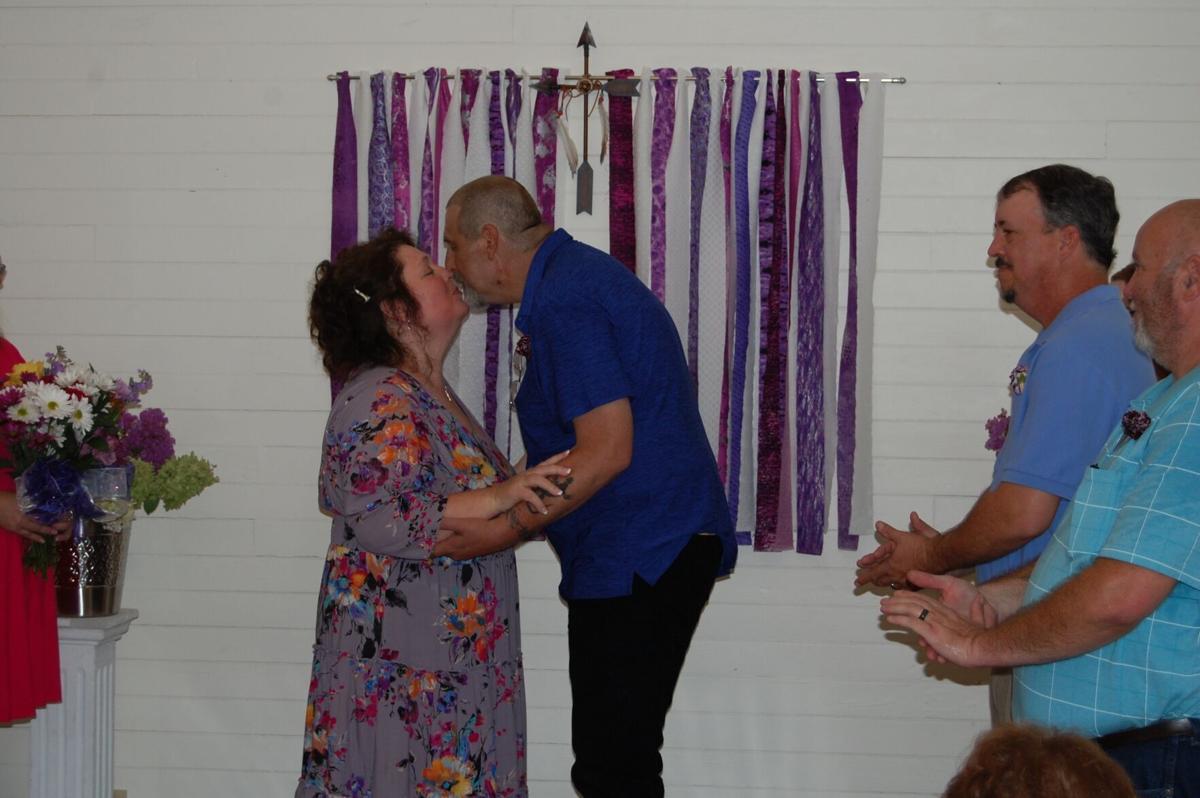 Melissa Ward Garner, left, kisses husband Nick Garner at the end of their wedding on Saturday at the chapel at Hagan-Stone Park in Pleasant Garden.

PLEASANT GARDEN — “Will you take me to be your husband as long as our hearts still beat?”

Nick Garner read his handwritten vows to fiancée, Melissa Ward, in a small chapel overlooking a lake at Hagan-Stone Park in Pleasant Garden. Surrounded by about 20 of their closest friends and family, the intimate, Saturday afternoon ceremony highlighted years of the Greensboro couple’s love.

Nick, 48, and Melissa, 46, first met when they were classmates at Jackson Middle School more than 30 years ago. The two grew closer as adults after reconnecting on Facebook and have been dating on and off for the past eight years.

“We had talked about marriage a few times,” Melissa said, “but it was just never the right time.”

The right time came a few months ago when doctors told Nick he only had between six and 12 months to live.

Nick found out in December he was suffering from liver failure. When Melissa heard the news, she visited him at the hospice care center in Pinnacle that she described as “a bad situation.” She knew she had to do something.

“I found out where he was, and I wasn’t going to leave him there,” Melissa said. “I did everything in my power to go get him and bring him home to me.”

Melissa brought Nick to Greensboro where he began staying at AuthoraCare Collective (formerly Hospice and Palliative Care of Greensboro).

Nick’s condition deteriorated. In April, his doctors said he would likely not survive the year.

In early July, Melissa began to plan her proposal. She wrote a note on a heart-shaped chalkboard, expressing her love for Nick. When she finally asked him the question on July 13, Nick had a short but telling response.

“You beat me to the punch.”

Nick had already picked out a ring and was planning on proposing to Melissa sometime in the coming days.

Just weeks after the proposal, when Nick’s condition was seemingly bleak, things began to turn around. He’s now in stable condition and is expected to survive well past the short time frame his doctors originally set for him.

Nick was able to move out of hospice care and back home with Melissa just a week and a half before the wedding.

“Care, frankly, is what turned his situation around,” Snoddy said, “all of the love and attention he’s getting now compared to what he was getting at that first facility, that made all the difference.”

That love was evident in the chapel Saturday. Some family members cried happy tears, others cracked jokes and laughed.

“Maybe she’ll finally leave me alone now,” Melissa’s 23-year-old son, Cameron Ward, joked as he gave away his mother at the altar.

While the future of Nick’s medical condition may be uncertain, Melissa is certain of her responsibility to her now-husband.

“It was my job to make sure he was taken care of,” Melissa said, “so that’s what I did.”

Nick Garner, 48, stands in front of the chapel at Hagan-Stone Park in Pleasant Garden on Saturday before getting married.

Melissa Ward, right, is walked down the aisle by her son, Cameron Ward, on Saturday. Ward, 46, reconnected with former classmate Nick Garner, 48, and they both had the idea to propose around the same time. She asked the question first, but he already had a ring ready.

Melissa Ward Garner, left, kisses husband Nick Garner at the end of their wedding on Saturday at the chapel at Hagan-Stone Park in Pleasant Garden.