But Harry Knabb, the chairman and chief executive of Art for Art’s Sake, the nonprofit that gave Schmidt a $150 stipend to create the mural in ARTivity on the Green, said the situation has nothing to do with censorship and that Schmidt did not follow AFAS’s rules for painting his mural.

Schmidt, who lives in Winston-Salem, said he was accepted in 2020 as a muralist for Concrete Canvas 2021 Arts and Music Festival, a Mural Fest, presented by Art for Art’s Sake but had not been given any content guidance on his painting.

“I had an idea for painting about ‘DEACTOWN,’ which for those of us who live in Winston-Salem, we’re starting to see all over downtown. This stenciled ‘DEACTOWN’ written everywhere. It does seem like Wake Forest (University) is trying to kind of rebrand downtown Winston-Salem to make it theirs. I think that’s quite symbolic of how Wake Forest buys up properties and real-estate in Winston-Salem and makes it much harder for working class folks to get housing. It’s quite literally a corporate takeover.”

He said he got the idea to paint ‘DEACTOWN’ and make a parody of ‘DEACTOWN’ and the Demon Deacon, the mascot of Wake Forest University, “to make a piece critical of the corporate monopoly of Winston-Salem.”

Schmidt said he reached out to Kendall Doub, a board member of Art for Art’s Sake and curator of Mural Fest via text messages about a week before the Sept. 11 festival, providing his idea and requesting an explanation of the content rules for the event. He said Doub told him “no nudity, no violence and no politics.”

He said he asked Doub for specifics on the meaning of politics and sent him a description of what he planned to do — painting the Demon Deacon as a robber baron and having him stepping on little houses as part of ‘DEACTOWN.’

“He approved that,” Schmidt said. “He said, ‘That should be fine.’”

On Sept. 11, Schmidt started working on his painting.

He said he got a text message from Doub on Sept. 14 letting him know that his painting would have to be removed.

“Kendall went on to offer to pay me an additional $150 stipend to paint a different mural,” Schmidt said. “He was really gracious and encouraged me to paint something else, but their CEO, Harry Knabb, would not let that painting stay on the wall. It had to be painted over.”

Schmidt said originally he had been told that the sponsor of the event was offended by the mural and asked that it be removed, but Doub later said that it was Knabb who asked that the piece be removed because it was too political.

Schmidt said Doub tried to do everything he could to accommodate him in regard to the artwork, but he decided not to accept a second stipend or do another mural.

“In the day and age that we’re living in, a lot is politicized,” Schmidt said. “If the rule is no politics, I think that in the future, the event is going to have to be extremely specific about what it means by no politics and what specific business entities can’t be included in that.”

In an email statement, Wake Forest said that it “supports the arts and the free expression of artists.”

Knabb said he takes full responsibility for taking down the mural, saying that AFAS officials did not talk to the festival sponsor or Wake Forest about the work.

“They didn’t even know about it,” Knabb said. “We saw it and we took corrective action immediately.”

He said that the situation is not about censorship, saying that Art for Art’s Sake has had 70 artists do murals on the wall in ARTivity on the Green over the last seven years and this is the first time they have had a situation like this.

“Because we said, ‘No politics, no religion, no sex and no hate,’” Knabb said. “That was always the rules.”

He said AFAS has no problem if Schmidt wants to paint what he painted on another wall at another place.

But he said, “This is private property and we have our standards …. For 14 years, we’ve kept all that stuff out of it and kept it for the community and for the enjoyment of the community.”

He said AFAS spent a lot of money on ARTivity park.

“We opened it so that families could come there,” Knabb said.

He said AFAS officials felt Schmidt’s mural was over the line.

He said that when they offered Schmidt another stipend to do a different mural, he said he didn’t want to do that.

“The purpose of AFAS is our mission statement: “To build, educate and celebrate community through art,” Knabb said.

Since Schmidt posted about his experience with the mural on TikTok and Facebook several days ago, Schmidt said folks have reached out to him to have the same mural painted on their walls.

“I’m definitely going to do that,” he said.

In addition, social media has erupted in conversations.

“I’ve had a lot of support on social media,” Schmidt said. “There’s been some backlash to it, but there has been a big conversation happening as a result here in Winston-Salem about how much control we are letting businesses have over our culture, over our arts, over our housing. As an artist, I couldn’t be happier with that being the result of something that I’ve painted.”

Dean Franco, a professor of English at Wake Forest, posted on Facebook: “Local friends, don’t lose sight of the real story. A private park that was designed expressly for gentrification (this is clear, according to the designer’s website and interviews) is a political space. Hosting public murals at this private park is political; it’s art-washing and it’s perfectly common in downtown margins all over the country. Claiming that this political space is a-political is *very* political. Calling out the one mural that doesn’t conform to the dominant political logic is a classic feint, a reliable tactic that solicits discussion about how best to police (rather than upend) norms, and distracts us from questioning how those norms suppress a real, city-wide conversation about the who and how and why of unaffordable housing. Censorship is not the main issue here.”

Knabb said AFAS developed ARTivity park and its building in the Arts District to keep other artists involved, saying, “So we were fighting gentrification, if anything.”

He said, “We did this park and this building because we didn’t want some day a plaque on Sixth and Trade streets to say, ‘This used to be the Arts District of Winston-Salem.’”

Chase Law, president and chief executive of Arts Council of Winston-Salem and Forsyth County, said she has seen some of the comments about the situation on social media.

“Since the dawn of time the arts have always played a role in sparking conversation and reaction in the community around current events, political happenings, and social issues,” Law said in an email statement. “Nicholas Schmidt’s mural did just that. Arts organizations in our community set their own policies and protocols, as does Arts Council. We acknowledge that it takes every voice, every talent, and every story to make our community complete. Arts Council is committed to serving as a facilitator, organizer, and promoter of conversations that are authentic, inclusive, and forward-thinking.” 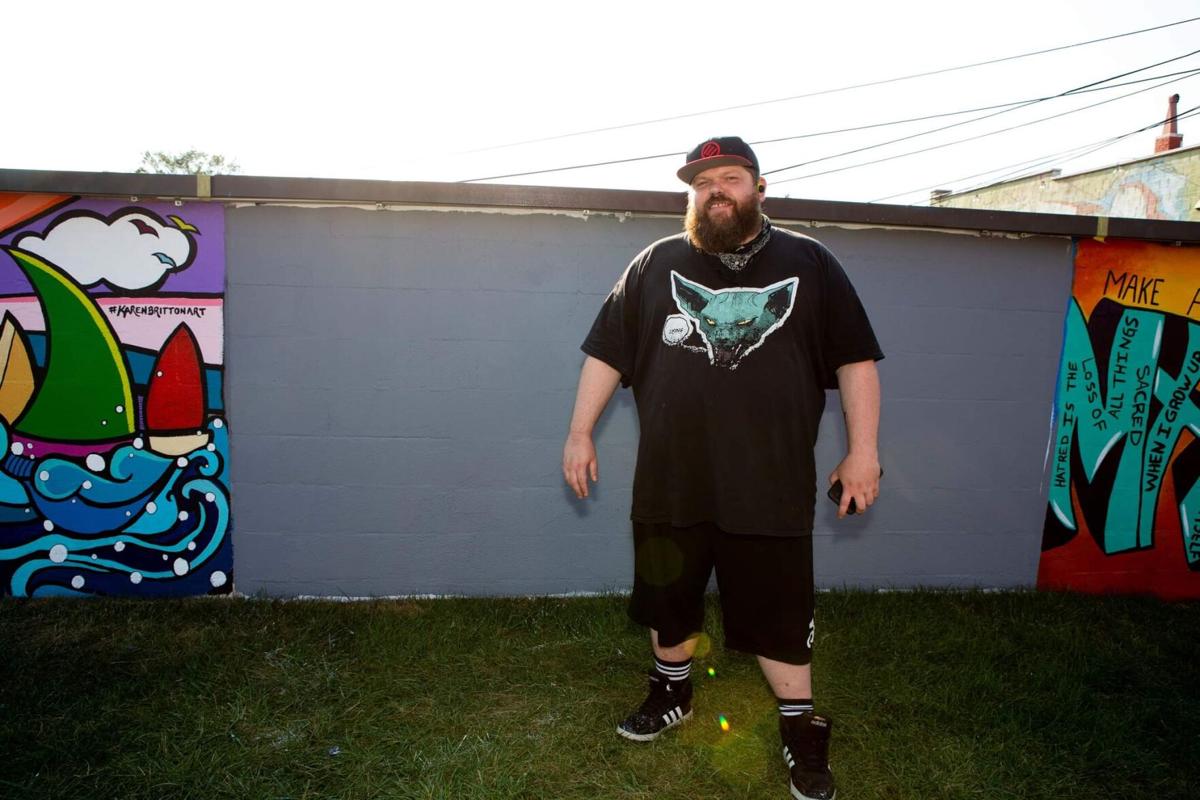