Son of a math professor was 12 when he and his family moved from the town of Wake Forest.

All Are Welcome, No Exceptions.

With their vote Sunday to end a nearly two-century tradition of an on-campus Baptist church at a school established by Baptists, members signaled that they no longer feel the same level of hospitality from their historical hosts.

“Something changed,” longtime member Jerry Gay said of the church’s relationship with the university.

Gay’s connections to Wake Forest Baptist and the university give him a unique perspective on their interplay.

As the 7-year-old son of a Wake Forest math professor in 1951, he was there when President Harry Truman came to Winston-Salem to take part in the groundbreaking for the school’s new campus.

“I didn’t know what was going on but I did watch the United States president dig a hole,” Gay recalled with a chuckle.

Five years later, Gay and his family moved from the town of Wake Forest to Winston-Salem, where his father began teaching in the newly constructed Reynolda Hall building.

When Wake Forest Baptist Church was launched that same year, Gay was part of the inaugural congregation.

“There was a whole group of us faculty brats who were in church that first Sunday, and I’ve been there ever since,” he said.

Gay, a retired court reporter who will turn 78 next month, also was one of the Wake Forest Baptist members who voted Sunday to dissolve the 66-year-old church.

The church attracted hundreds of worshippers for years. Weekly worship attendance now tops out at about 30, according to the Rev. Rayce Lamb, Wake Forest Baptist’s interim pastor.

Wake Forest Baptist members and leaders began contemplating the church’s future last fall after being notified that beginning in 2023, they could no longer use university facilities for worship at no charge and would be required to pay $2,500 a month to continue gathering on campus in Davis Hall.

“It galls me to think about,” Gay said of the decision by the university, which reports assets of more than $4.7 billion and a $1.8 billion endowment. “We ain’t got that kind of money, and what the hell they want with it, I don’t know.”

‘Changing identity’When members of Wake Forest Baptist disperse after worshipping together for the last time later this year, the moment will signal an institutional shift for a university whose denominational ties began fraying four decades ago, a religion scholar who has watched the transition with particular interest suggests.

“The closure of the Wake Forest Baptist Church is, in my view, a symbol of the university’s changing identity, moving toward a non-sectarian private school with Baptist-related roots,” said Bill Leonard, founding dean and professor emeritus at the Wake Forest School of Divinity.

The original Wake Forest Baptist Church was established in 1835 on the campus of what was then known as Wake Forest Institute, a year after the school was founded by the Baptist State Convention of North Carolina.

The Winston-Salem church’s formation coincided with Wake Forest’s move to the new campus.

In the early years, freshman would flock to services, then held in the spacious Wake Chapel, on the first Sunday after they arrived on campus, Gay recalled.

“The students would be lined up from the front, all the way to the back and around, then back to the front again,” said Gay. “At the time, it meant something to stay in the church, although I’m sure their parents were more excited than they were. A lot of the students, maybe they joined and that’s the last time we saw them.”

Decades of dispute over academic freedom and moral restraints at the school opened a rift between the university and the State Baptist Convention, who agreed to part ways in 1986.

But Wake Forest Baptist remained on campus and continued to aggressively advocate for progressive issues – some of which put the church directly at odds with the state convention and tested its relationship with the university.

In the late 1990s, a decade-and-a-half before same-sex marriage became legally recognized in North Carolina, two women members of Wake Forest Baptist told the congregation they hoped to be united in a covenant ceremony in Wait Chapel, where the church worshiped.

Such ceremonies had never been performed by the church or on the campus, and the debate about whether they should opened divisions within the congregation and among Wake Forest leaders.

After months of sometimes contentious discussion – and a handful of defections from the church and school – Wake Forest Baptist agreed to the ceremony and the university adopted policies for such on-campus same-sex unions.

The covenant service took place in 2000, leading to the church’s ouster from the Baptist State Convention. The congregation withdrew on its own from the Southern Baptist Convention, the nation’s largest Protestant denomination.

“As the university and church cut their direct Baptist ties, the number of Baptist students and faculty members gradually declined, as did the on-campus congregation,” Leonard noted.

Beginning of the end

The new university policy that would require Wake Forest Baptist to pay $2,500 a month to hold services on campus prompted months-long discussions that ended Sunday with the congregation’s vote to dissolve.

The church, which has never had a freestanding facility on the Winston-Salem campus, paid the university rent for office use but not for worship space, Lamb, the acting pastor, said.

In the fall of 2021, however, the school informed the church that beginning in January 2023, it would be required to pay for the continued use of Wake’s Davis Chapel on Sundays.

“Around the same time is when the church began a ... process to discern what God was calling us to next,” Lamb explained. “With an aging and declining membership, limited financial resources and this new rental policy, it was determined by membership that continuing as is and paying rent was not the best use of the church’s resources.”

The university insists its policy shift was not aimed at the church.

She did not directly address a question from the Journal about who at the school made the decision to begin charging the congregation for using Davis Chapel.

“We celebrate Wake Forest Baptist Church’s rich legacy on our campus and in the community,” Walker said. “We understand the church’s decision to dissolve involved several factors and came after an intentional, thoughtful discernment process by members of the congregation. The university continues to offer a wide array of worship opportunities for students, including those of Baptist affiliation and heritage.”

For now, Wake Forest will continue to allow the congregation to worship in Davis Chapel, which has a capacity to seat about 90 people, Walker added.

In a region dominated by the Southern Baptist Convention, Wake Forest Baptist and progressive congregations like it engaged in activism that defied popular notions of what it means to be Baptist.

“Since the 1980s the SBC has been in the control of a significantly conservative majority with strongly rightward theological and political orientation,” Leonard said. “In the days when they were connected to the SBC, (Wake Forest Baptist) reflected a discernable progressivism on issues related to race, divorce, civil rights, women in ministry, and ultimately LGBTQ persons and issues. They were also progressive on theological issues related to baptism, evangelism, ecumenism, social gospel and interfaith dialogue. Many of those members were WFU faculty, staff and, often, students.”

From 2011 to 2013, Wake Forest Baptist was led by lesbian co-pastors, the Revs. Susan Parker and Angela Yarber.

The Rev. Lia Scholl, who served as pastor from 2014 to 2021, was among those arrested during Poor People’s Campaign protests in the North Carolina Legislative Building in Raleigh, and in Washington, D.C.

Church leaders and members also have participated in marches in recent years for voting rights and Black lives, and on behalf of immigrant families separated at the Mexico border.

While the prospect of paying $2,500 per month for worship space triggered talks that led to the congregation’s decision, the end was inevitable, Lamb suggested.

“The landscape of higher education is changing as is the religious landscape of America,” he said. “The challenges faced by Wake Forest Baptist Church are unique in the sense we are an autonomous and independent Baptist church housed at the center of a private university, yet it isn’t unique in the fact that our social location has not shielded us from the challenges faced by many progressive churches in America.”

Lamb added that in the coming months, he will work to match church members with congregations that share those progressive values.

“First, we are going to take some time to grieve and mourn the loss of our faith community,” he said. “But then, we will begin the work of dying well and use our remaining financial assets in a way that aligns with our mission and helps carry on the legacy of our church for generations to come.”

The end would have come soon enough for Wake Forest Baptist, which is why the university simply could have let the declining congregation dissolve on its own time, Jerry Gay, the original member, insisted.

Son of a math professor was 12 when he and his family moved from the town of Wake Forest. 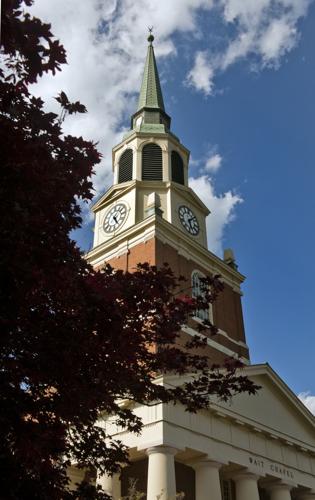 For 66 years, Wake Forest Baptist Church has met at Wake Forest University, first in Wait Chapel and later in the smaller Davis Chapel. Earlier this year, the university told the church it would have to pay $2,500 a month to rent Davis Chapel, a fee the church cannot afford. The church voted Sunday to dissolve. 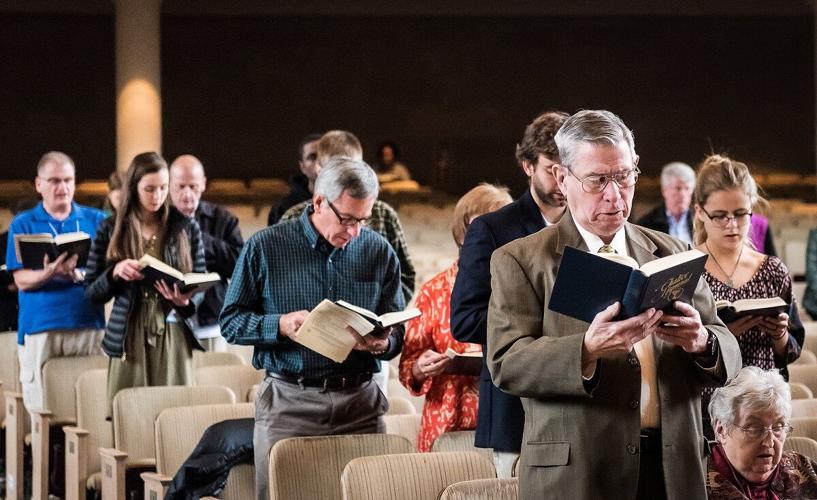 The congregation sings during a Sunday service in 2017 in Wait Chapel.