K&W Cafeteria Inc. has submitted its latest federal bankruptcy reorganization plan, which calls for keeping, at most, 14 stores open while paying off largest creditor Truist Financial Corp. by July 1, 2022.

K&W, a Winston-Salem-based staple of Southern comfort foods for 83 years, filed for Chapter 11 protection Sept. 2 as the latest step in a corporate downsizing that began before the COVID-19 pandemic.

On Dec. 23, the company received permission to delay filing the reorganization plan by three months until March 31. Judge Benjamin Kahn also approved a delay until May 30 for confirmation of the plan.

K&W’s owners and management have said they want to change course on the restaurant chain’s future after failing to attract an adequate bid for the assets. K&W hired a company to assist with finding potential buyers.

“While we were hopeful we would find a buyer for K&W Cafeterias, given the current COVID-19 climate, we were not surprised that a buyer did not come forward with an acceptable offer,” K&W president Dax Allred told the Winston-Salem Journal on Dec. 11.

“We are working with our attorney to finalize a reorganization plan to be presented to all parties of interest, where K&W will continue to operate.”

Allred could not be immediately reached for comment on the latest reorganization plan.

K&W had 18 restaurants open at the time of the bankruptcy filing, including three in Winston-Salem and 14 in North Carolina.

According to Monday’s filing, it now has 14 locations, including those on Healy Drive and on Hanes Mill Road in Winston-Salem.

K&W warned in the reorganization plan that it could close additional locations “in the event operations are unprofitable, or are prohibited or unduly restricted by COVID-19 orders, upon expiration of the underlying lease, if not extended, or at any of the locations leased from affiliates” if the affiliates and K&W “mutually agree to terminate such lease.”

K&W said it had 1,035 employees when it entered bankruptcy but was down to 834 employees as of the Dec. 23 filing.

What K&W owes, what it’s selling

The initial bankruptcy filing listed K&W with assets of more than $30 million.

The company has liabilities of more than $22 million. Creditors hold secured claims on $12.56 million in property, and the rest is made up of unsecured claims. The restaurant chain has between 100 and 199 creditors.

K&W said in Monday’s filing it would receive $2.99 million from an insurance policy with Guardian Insurance . About $2 million would go into a debtor-in-possession account for working capital, with the rest transferred to the plan consummation account.

Truist has agreed to approve the latest reorganization plan, according to the filing. The bank said Tuesday that “we don’t comment on client relationships.”

The PPP loan to K&W was one of the largest granted to a North Carolina business. The U.S. Treasury Department listed the top PPP loan range at between $5 million and $10 million.

There is the potential for a portion, if not all, of the PPP loan to be forgiven by the federal government.

The latest reorganization plan lists Truist with $7.77 million in secured claims against K&W.

The sale of non-core K&W-owned properties would be the main mechanism for how Truist would be repaid.

The debt owed to Truist is required to be reduced to $4.6 million on the date the reorganization plan goes into effect and paid off completely, with interest, by June 30, 2022.

The biggest property remaining for sale is a 2.73-acre Lake Norman-area property at Pointe Regatta Island with a list price of $4.75 million.

A farm and a condominium are for sale with no list price set. The farm was listed as potential collateral to Truist if the PPP loan is not forgiven. 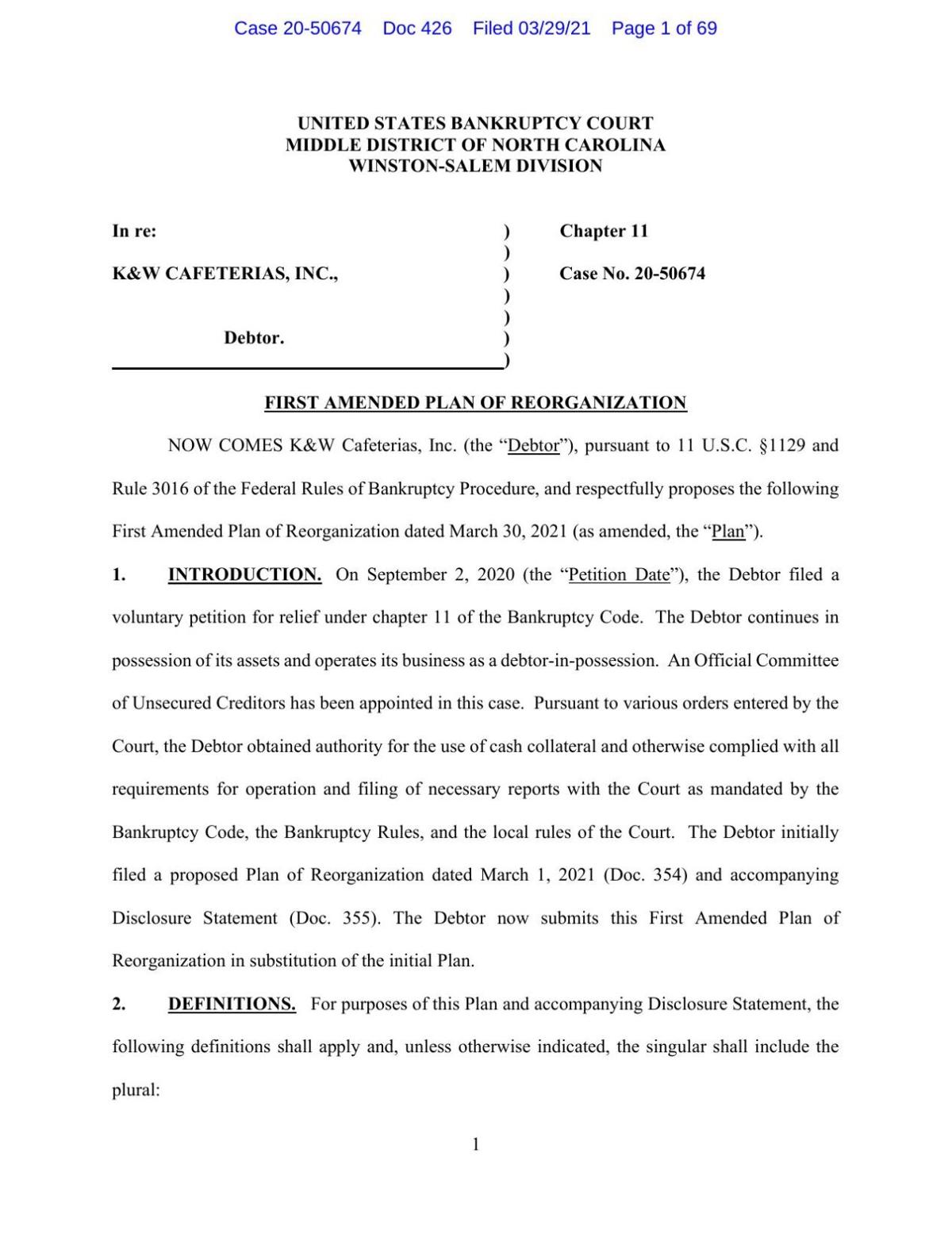 Photos: K&W Cafeterias through the years

WATCH NOW: Here's how K&W plans to come out of bankruptcy