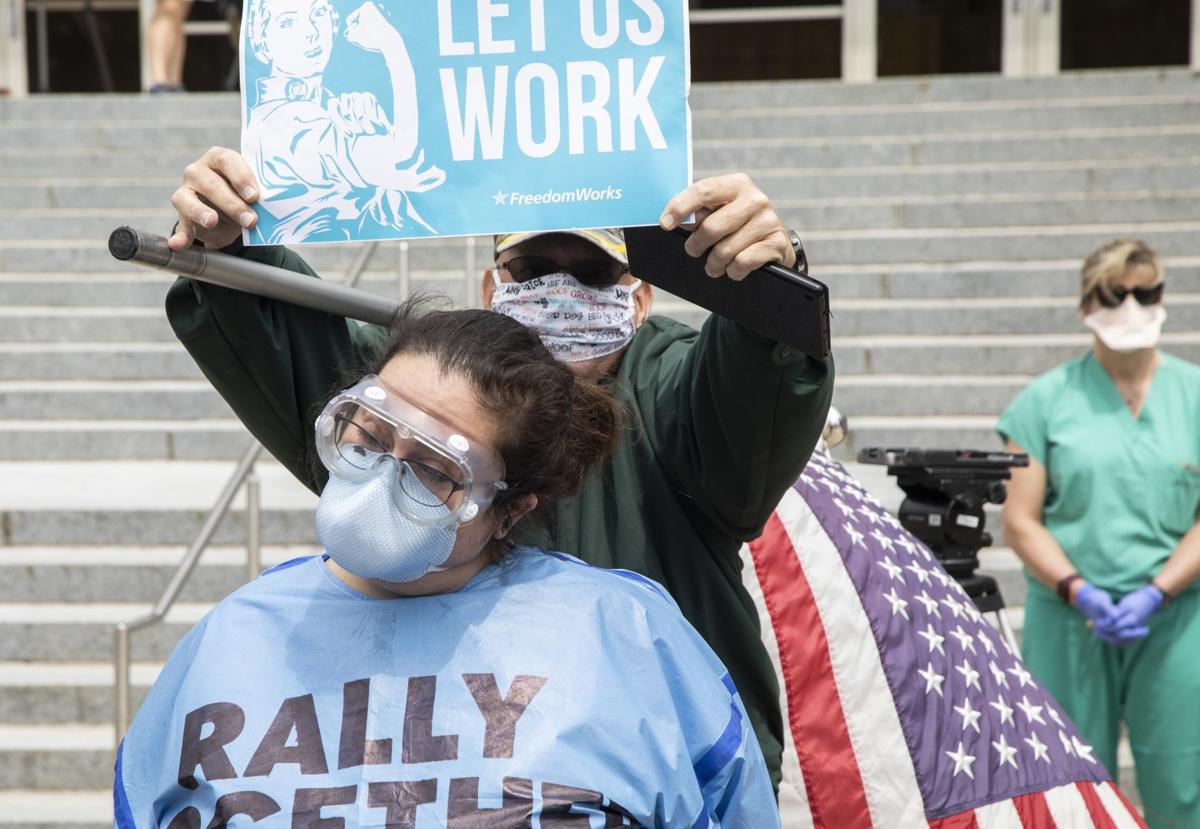 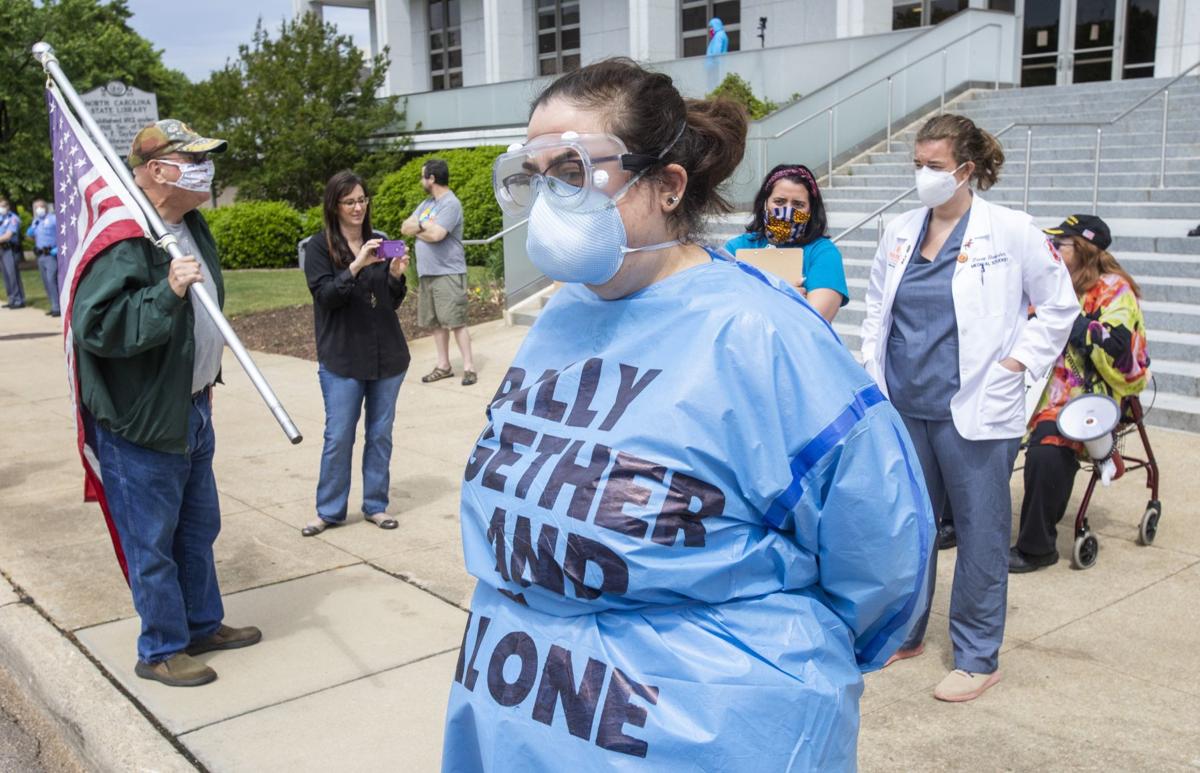 Amber Brown, a nurse practitioner who lives in Kernersville, says she endured the heckling that she received Tuesday at the ReOpen North Carolina protest because she wants to protect coronavirus patients and the public from more exposure to the disease.

“I wanted to go because the thought of reopening this early actually scares me,” Brown said Thursday. “We are not adequately testing. We haven’t had enough days with a reduction of cases. And we don’t have adequate supplies.”

During the protest, Brown was heckled by 10 protesters who screamed at her as Brown stood outside the state legislative building in Raleigh. A widely circulated photo and video shows a man wearing a mask and carrying a U.S. flag standing behind Brown and yelling at her.

Brown, 40, said that a female protester actually verbally attacked Brown for her weight. Others called her a strain on the health-care system, saying that obesity kills more people than the COVID-19 virus, the News and Observer of Raleigh reported.

“I tried to block out so much of that because I figured that I could endure it longer if I ignored them,” Brown said. “As far as the things they called me, they were not the scariest or the most upsetting things that I have ever heard.

About 1,000 people gathered Tuesday outside the state-government complex in downtown Raleigh to demand that Gov. Roy Cooper reopen the economy despite the coronavirus pandemic. Cooper extended the stay-at-home order Thursday through May 8 and announced a plan to lift restrictions based on the trends of the virus.

Brown, who formerly worked last month as an oncology nurse practitioner at Wake Forest Baptist Health, said she stood up for her patients at the protest. As a counter protester, she wore a T-shirt that said, “Rally Together and Die Alone.”

Brown said she advocated for patients who are scared if the state reopens too soon. These patients include people who’ve had bone marrow transplants and chemotherapy and have weakened immune systems, she said.

“These are the people that they (the protesters) want to sacrifice,” Brown said. “They couldn’t go and stand. I have a functioning immune system and I have a thick skin.

“Even though I’m not seeing them (patients) every day and interacting with them, they are still my patients,” Brown said. “I still touched their lives. They still carry me with them.”

Brown said she harbors no ill feelings against the protesters who heckled her.

Medical providers see the big picture of COVID-19 and realize that the statewide stay-at-home order is saving lives, Brown said.

Brown said she heard a lot of misinformation about the pandemic from the ReOpen protesters. For example, some protesters believe medical providers are hoarding ventilators and then said there are not enough ventilators, Brown said.

Other protesters accused Brown of being a fake nurse, a plant placed by counterprotesters and an actress, Brown said.

Prior to her nursing career, Brown worked as a chemist for Highland Industries Inc. in Kernersville and Vitacost.com Inc. in Lexington. In 2007, she received a bachelor’s degree in chemistry at Millersville University in Millersville, Pa.

A graduate of East Forsyth High School, Brown received an associate degree in nursing at Guilford Technical Community College in 2012, she said.

Brown can be employed as floor nurse, if needed, by Wake Forest Baptist Medical Center.

Because of the mitigation measures, the curve of COVID-19 cases has flattened in Forsyth County, and Wake Forest Baptist doesn’t need as many nurses on duty to care for all of its patients, including ones with the virus, Brown said.

She and other health-care professionals want to keep vulnerable people safe from the virus, Brown said.

“I’m not saying that we should never reopen,” Brown said. “But we are not ready to reopen yet.”

Here you go Winston-Salem Journal. Just because this one person was heckled it automatically delegitimizes everyone else in attendance and brands those who carry an American Flag as a racist and making fun of Over weight people. By the way how did you know to be there to catch this horrific event. I call bull on this one. Sounds like a set up to me.

[whistling][yawn][scared][yawn] There you go again Anthony Collins, automatically delegitimizing the WS Journal and being the ONLY ONE making accusations of racism. Perhaps YOU and the ReOpen protestors should actually listen to your President and, as he suggested on live TV, inject and/or ingest a disinfectant to prevent or rid yourselves of COVID-19. For you, I strongly suggest YOU use the Scrubbing Bubbles disinfectant, and lead by example. Then perhaps the WS Journal can print your story of 'survival' by your use of Scrubbing Bubbles to cleanse your lungs and get at that "bull" virus. [beam]

Its clear what the game plan is at this point and you cant expect the media to be fair or balanced. They are going to tell the story from the point of view of the agenda they are paid to promote. Right now approx 300 people dying worldwide per day from a engineered pathogen is adequate to yell “pandemic” and scare people into doing things otherwise absolutely unthinkable. Its not an argument you will ever win in the court of public opinion with the spin-machine as omnipotent and repetitive as it is today so just teach one at a time about people like Dr Buttar who is blowing the lid off this manipulation and corruption.