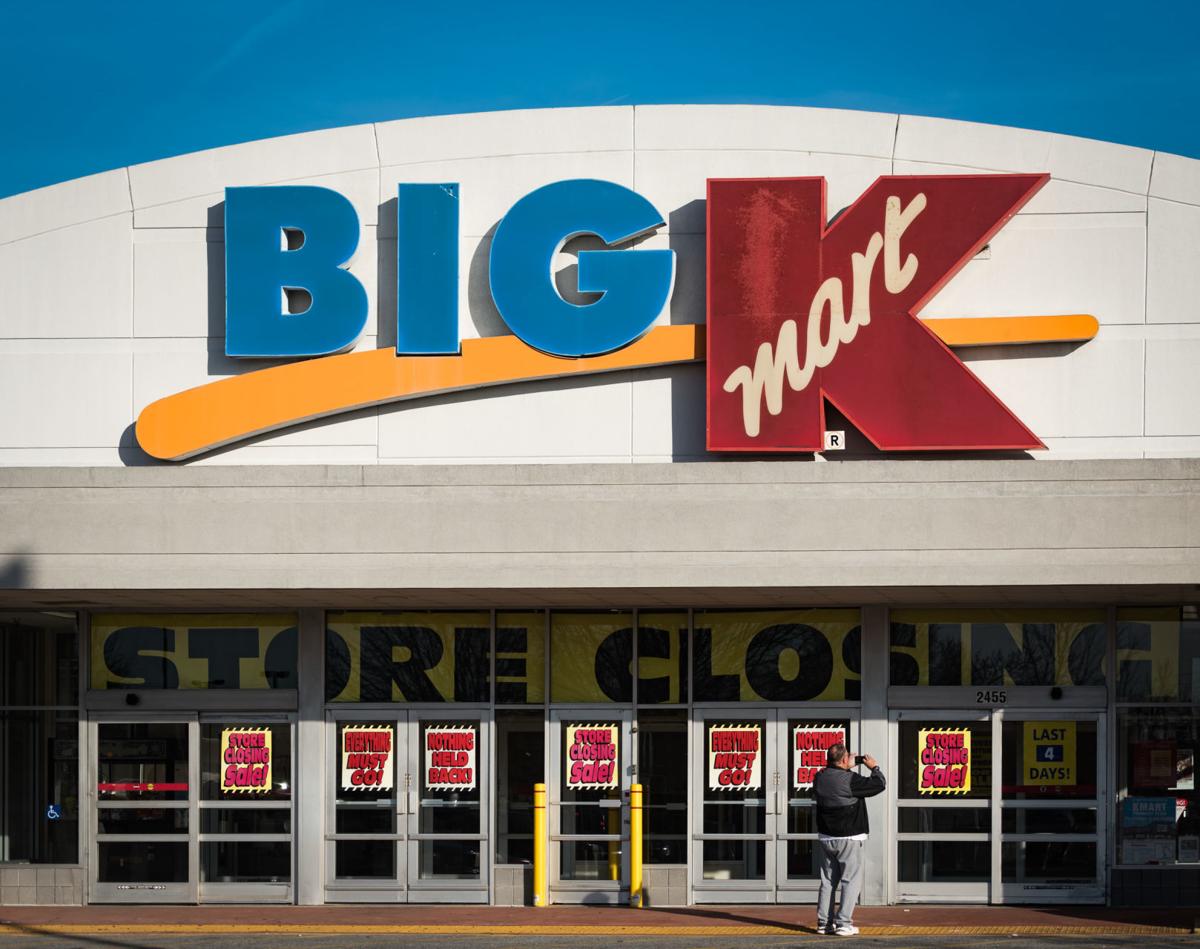 A man takes a picture of the Kmart entrance in Village Square in Clemmons. The store, Forsyth County’s last Kmart, closes Sunday. 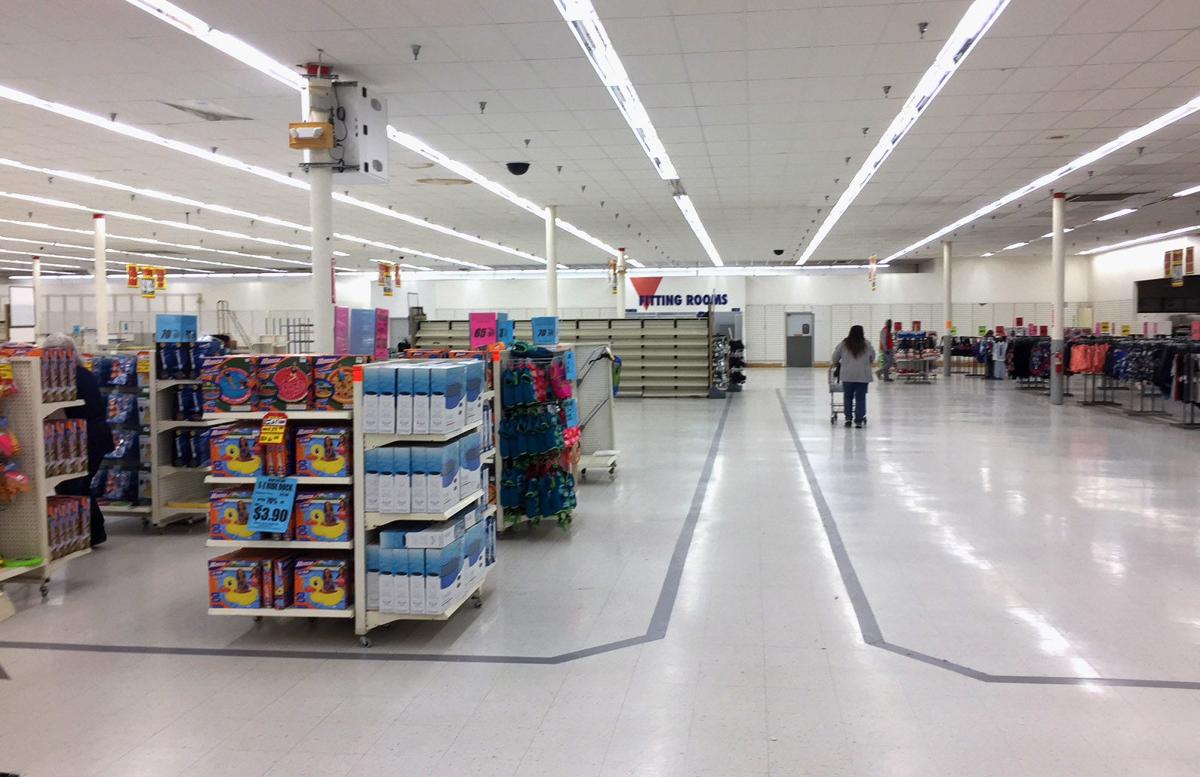 The Kmart in Clemmons is largely empty now, with the remaining merchandise pushed together in the center of the room. 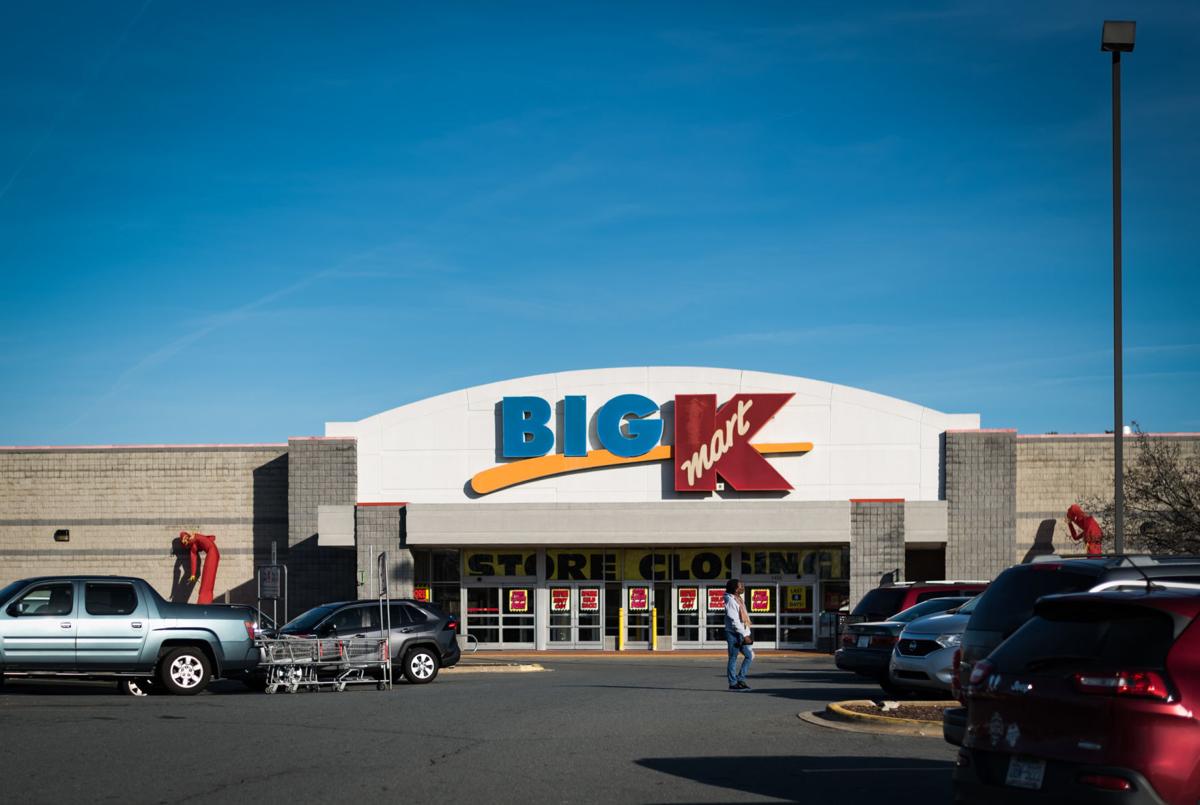 The Kmart in Village Square shopping center in Clemmons is the last in Forsyth County. 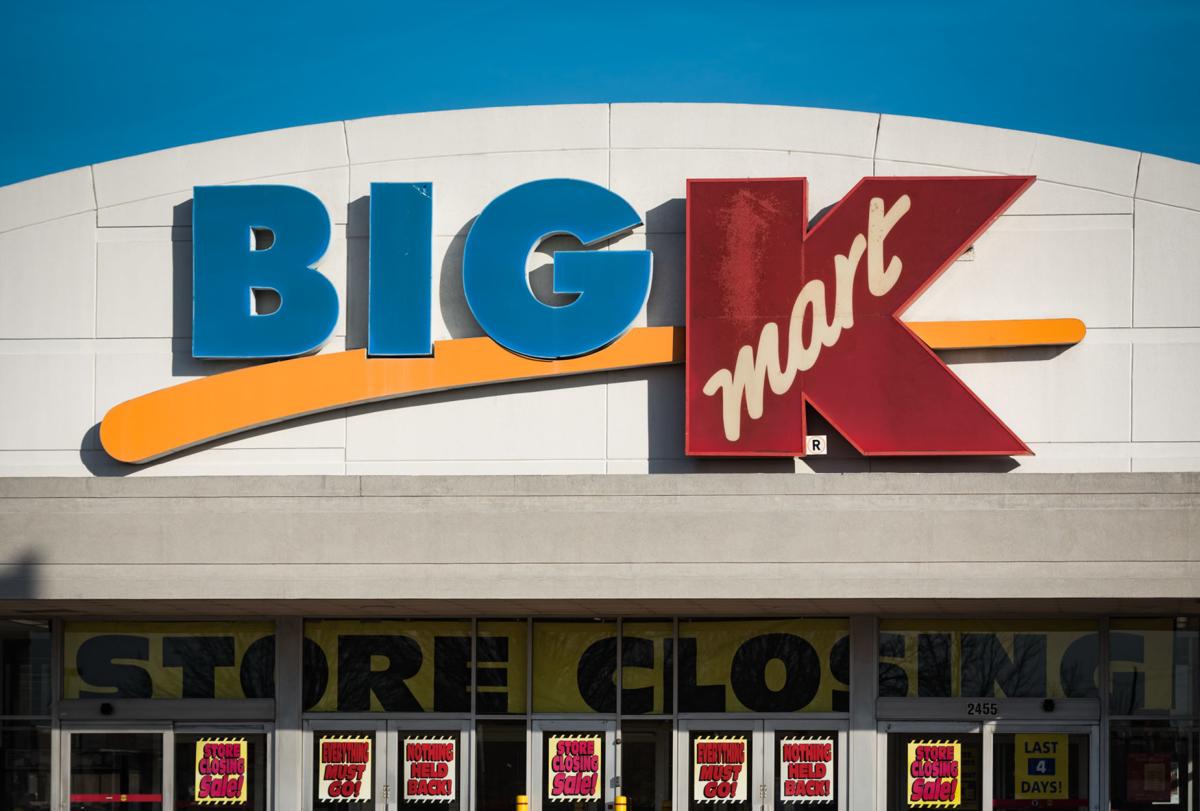 The Kmart in Village Square shopping center in Clemmons. 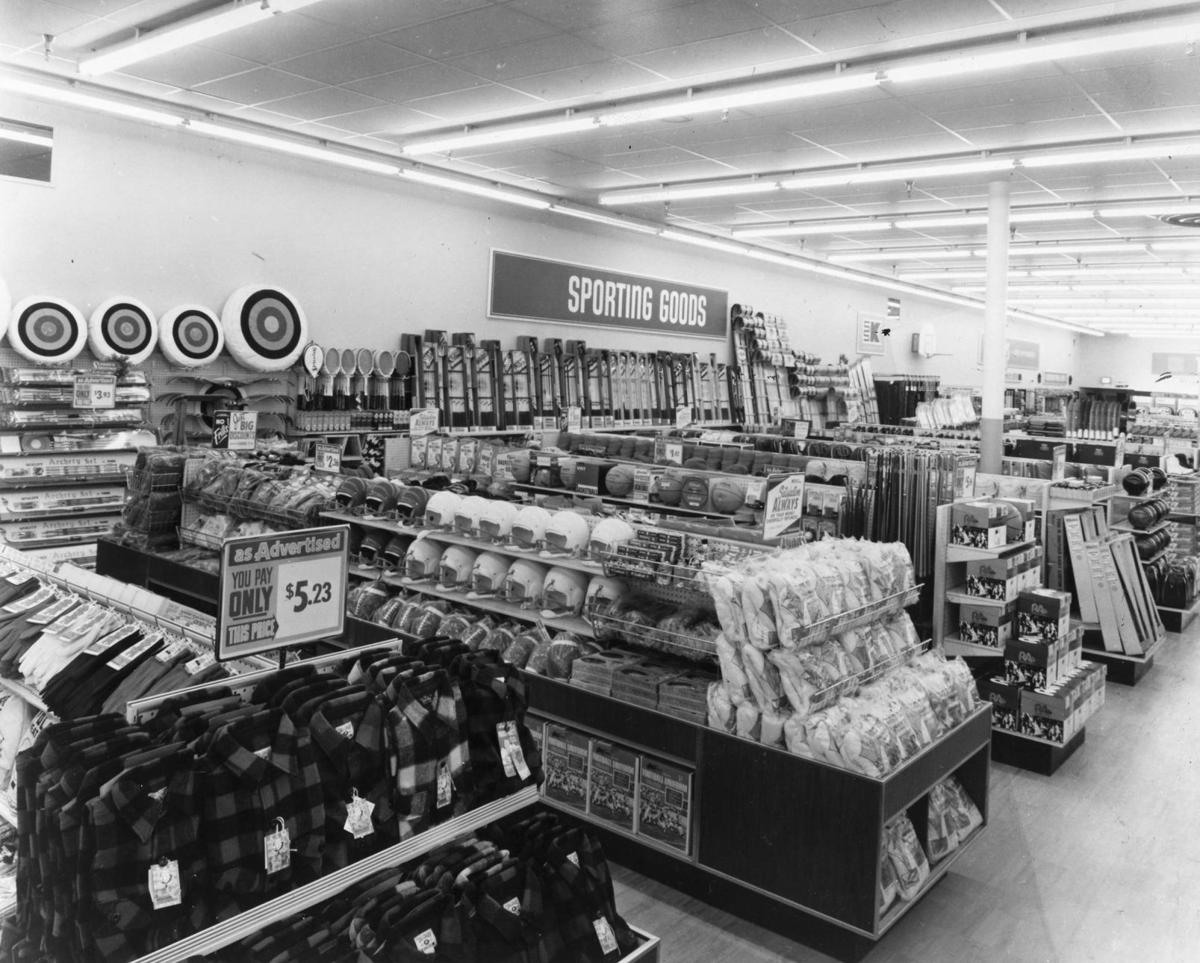 The Sporting Goods department in the Kmart on University Parkway in 1974. 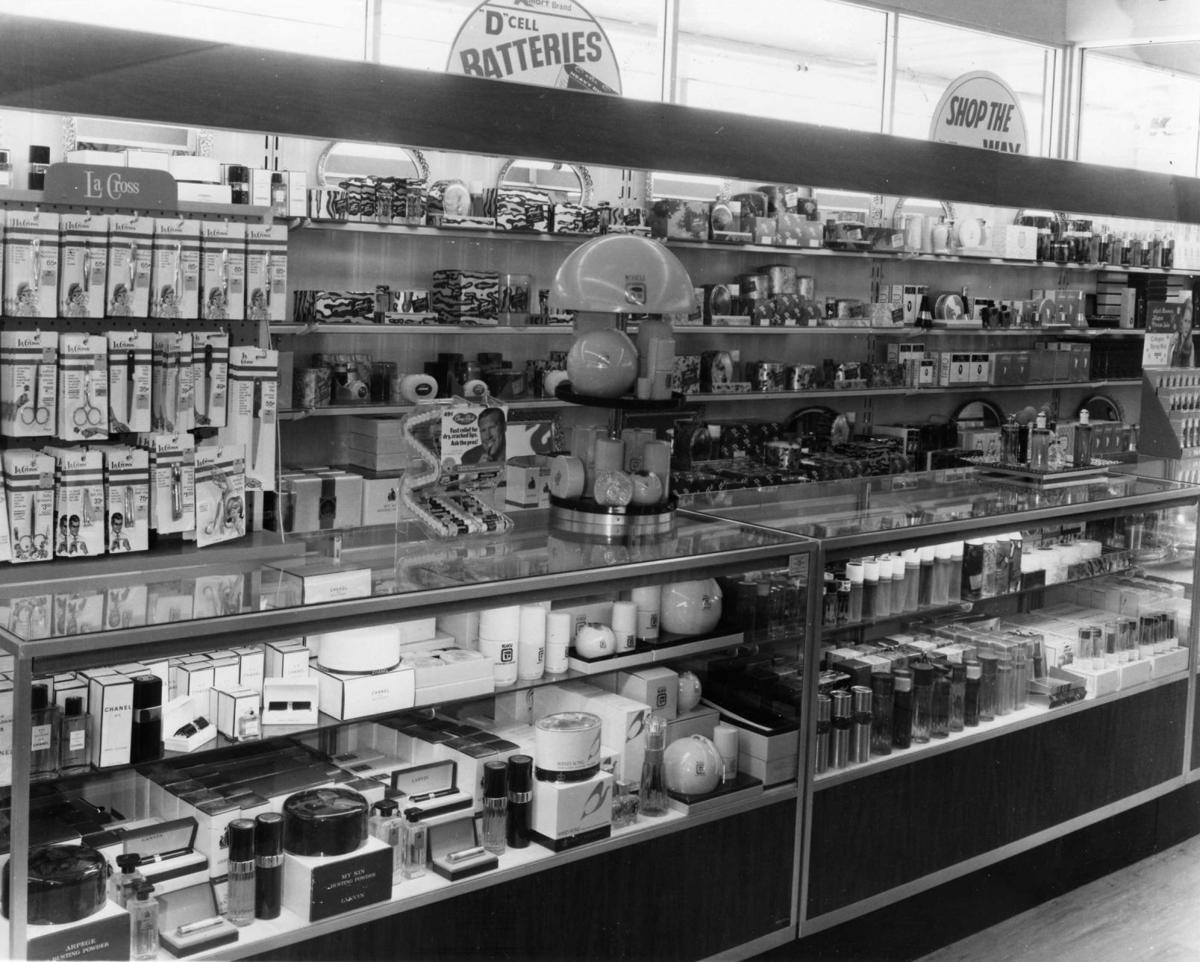 The Health and Beauty department in the Kmart on University Parkway in 1974. It was the first Kmart in Forsyth County. 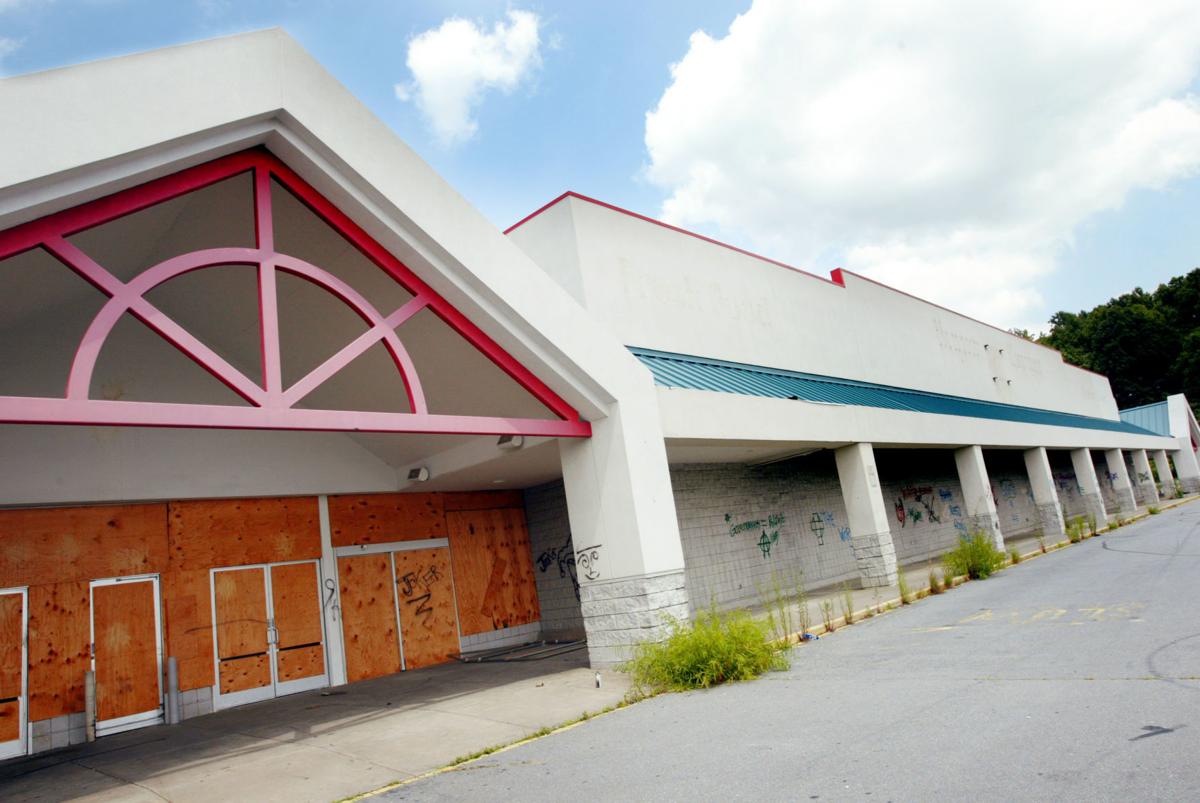 The exterior of the building formerly occupied by Kmart on University Parkway. 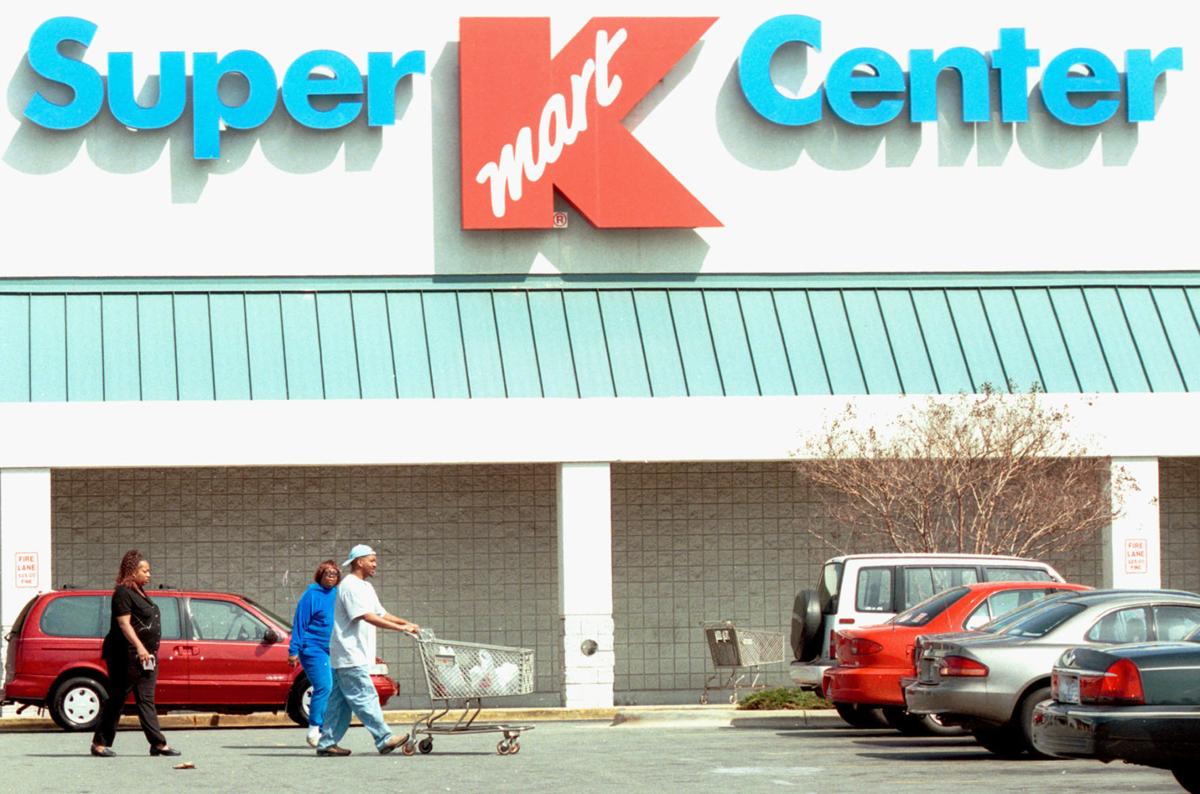 Kmart announced in 2002 it was closing its Kmart Super Center on University Parkway. 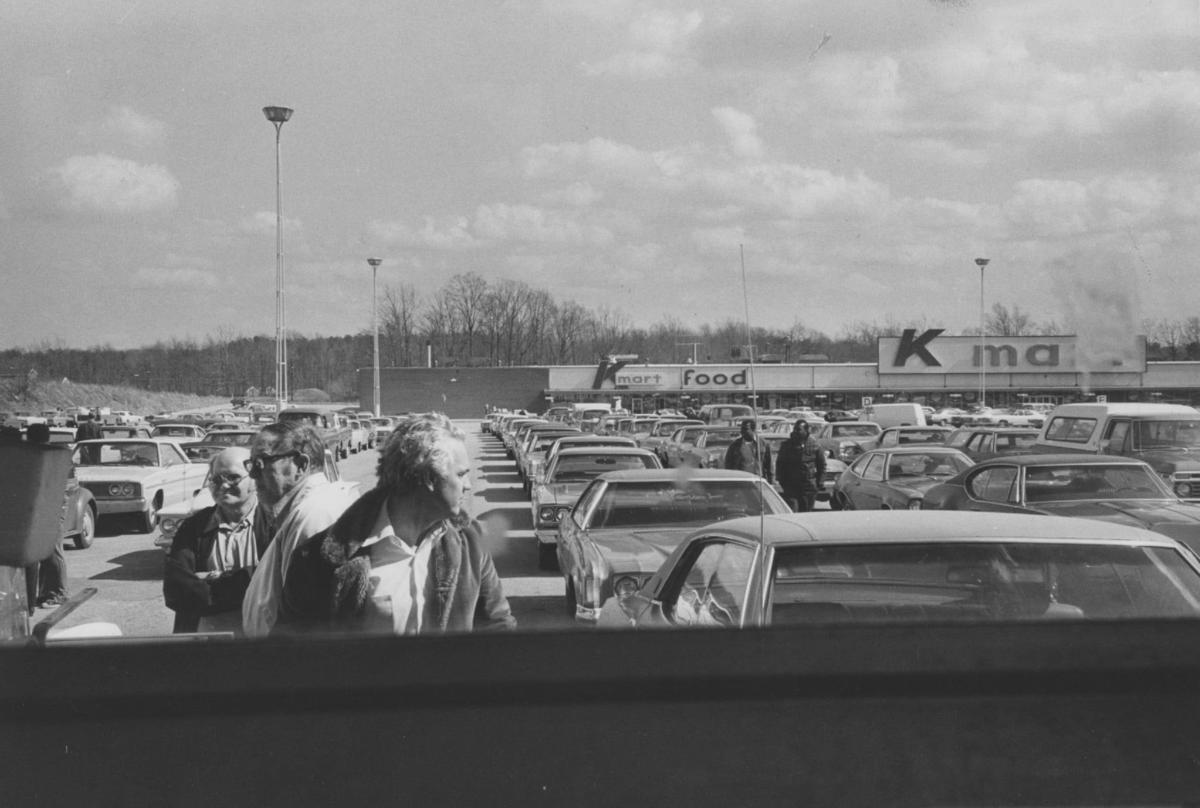 CLEMMONS — Over the last few months, shoppers at the Kmart on Lewisville-Clemmons Road have picked through deeply discounted sporting goods, garden supplies, clothing, toys and cosmetics, leaving a hodgepodge of odds and ends — inflatable rubber duckies, frying pans, bleach — that have been consolidated into a dwindling pile of merchandise in the middle of the store.

PHOTOS: Kmart through the years

Empty, cavernous and a bit depressing for folks who grew up with Blue Light Specials and frozen Cokes, the store is scheduled to close for good Sunday, ending Kmart's 45-year presence in Forsyth County.

Opened in 1992, the 95,000-square-foot store in Clemmons survived several rounds of nationwide store closings that shuttered the county's two other Kmarts, the Super Kmart Center on University Parkway in 2002 and the Kmart on Peters Creek Parkway in 2013.

Transformco, the company that owns Kmart, announced in August that it was closing the store, the first big-box store in Clemmons. It opened over the objections of neighbors who worried about increased traffic on Lewisville-Clemmons Road, a complaint that seems quaint now given the explosive commercial growth on that strip.

Shaylena Daniels of Clemmons was among the shoppers in Kmart last week browsing through the last dregs of merchandise.

"It's sad. I always liked Kmart," said Daniels, who had a few boxes of Christmas ornaments in her cart. "I always felt like there was better service and it was more friendly at Kmart than Walmart," she said.

A Kmart in Waynesville is also closing, leaving the state with two remaining stores, one in Raleigh and one in Kill Devil Hills.

As recently as 2002, Kmart had 16 stores in the Triad, including three in Greensboro, two in Winston-Salem and one each in Asheboro, Burlington, High Point, Kernersville, Lexington, Madison, Mount Airy, Reidsville and Thomasville.

Roger Beahm, the executive director of the Wake Forest School of Business Center for Retail Innovation, said Kmart's decision to steer its focus from customer satisfaction to maximizing its return on investment laid the groundwork for its long, slow demise.

Both Walmart and Kmart started in 1962 as discount superstores. By sticking to its core mission of growth and serving customers, Walmart has grown into the world's largest retailer, he said.

Kmart, on the other hand, drifted from that mission under new leadership and floundered.

"The vision of the original founder and ownership gradually changed from being the leading retailer to being part of an investment portfolio, and once that happens, your purpose becomes primarily financial, and your strategy becomes maximizing profit," Beahm said. "Remaining focused on meeting the needs of consumers in today's environment, that's the goal, and if you do that, you will be successful and the money will come. So you start to see how different objectives from the owners can start to change the direction of the company."

Though millennials may find this hard to believe, Kmarts once felt fresh and fun. There were neat stacks of merchandise, a layaway department, frozen Cokes served up by employees in aqua smocks and Blue Light Specials, a marketing gimmick that set off a frenzy among shoppers who chased down the flashing blue light to take advantage of a temporary sale on towels or undergarments.

Started in 1965, the Blue Light Special was an effective marketing ploy that distinguished Kmart from its competitors, Beahm said.

"It was something that customers remembered that was appealing and helped draw customers because of the discounts it represented," he said.

For the kids who went to Parkland High School in the 1980s, it wasn't the Blue Light Special but the deli that drew them to the Kmart across the road on Peters Creek Parkway. Back then, they would cross four lanes of traffic to eat in the store's deli rather than eat in the school cafeteria. That Kmart was the second in Forsyth County, opening in 1978.

Kimberly Mitchell Smith, from the Parkland class of 1982, remembers hopping across the road to buy red, white and blue crepe paper to decorate cars before football games.

"We'd hop over there for everything," she said.

The first Kmart in the county opened in 1974 in University Plaza on North Point Boulevard. In 1993, developers announced an ambitious plan to demolish Growers Warehouse, a cluster of tobacco warehouses, about a mile north of that Kmart and build a Super Kmart, which company officials touted as the store of the future. At 170,000-square feet, the "Super K" opened to much fanfare in 1994, poised to battle a 120,000-square-foot Walmart that opened in 1992, just up the road.

T. Michael Kelly, one of the developers of the Super Kmart site told the Journal in 1993: "This is the battle of the boxes."

Walmart was the victor.

The hollowed-out building became a magnet for vandals, foreshadowing what was to come for the once mighty retail giant. The site was bulldozed and later became The Grand, a cineplex. Gabe's moved into the old Kmart on Peters Creek Parkway, and it still looks and smells like a Kmart.

Scott Buffkin, the village manager of Clemmons, said he is not aware of any immediate plans for the Kmart site on Lewisville-Clemmons Road, which is owned by HRP Clemmons LLC, an affiliate of Harbour Retail Partners. The real estate firm paid $5.5 million for the 10 1/2-acre site in June.

"Hopefully, it will be filled soon and another good retail partner will fill the space," Buffkin said.

Beahm recently went into the Kmart in Clemmons, the first time he had been into a Kmart in a year.

"It's a very sad feeling to walk into one," he said. "The one thing I noticed was the atmosphere, the feeling that it was not lively. There wasn't much to choose from. And that's all reflective of having been in this downward spiral that they've been in for some time."

Michael Renegar, who combined his passion for storytelling and ghosts to become one of the Triad's top authorities on myths and legends, died …

A man takes a picture of the Kmart entrance in Village Square in Clemmons. The store, Forsyth County’s last Kmart, closes Sunday.

The Kmart in Clemmons is largely empty now, with the remaining merchandise pushed together in the center of the room.

The Kmart in Village Square shopping center in Clemmons is the last in Forsyth County.

The Kmart in Village Square shopping center in Clemmons.

The Sporting Goods department in the Kmart on University Parkway in 1974.

The Health and Beauty department in the Kmart on University Parkway in 1974. It was the first Kmart in Forsyth County.

The exterior of the building formerly occupied by Kmart on University Parkway.

Kmart announced in 2002 it was closing its Kmart Super Center on University Parkway.