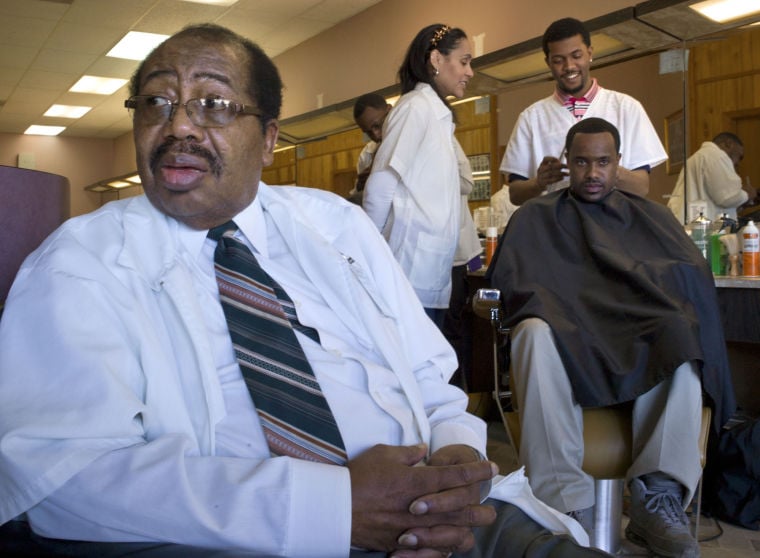 Ghuneem Furqan (left) in his Pyramid Institute of Barbering on University Parkway in Winston-Salem, NC,Thurs., Feb. 21, 2013, will retire Feb. 28 and close the school. Instructor Michelle King- Clinton (center) was overseeing barber student Dominique Walker as he cut the hair of customer Kelly Stevenson. 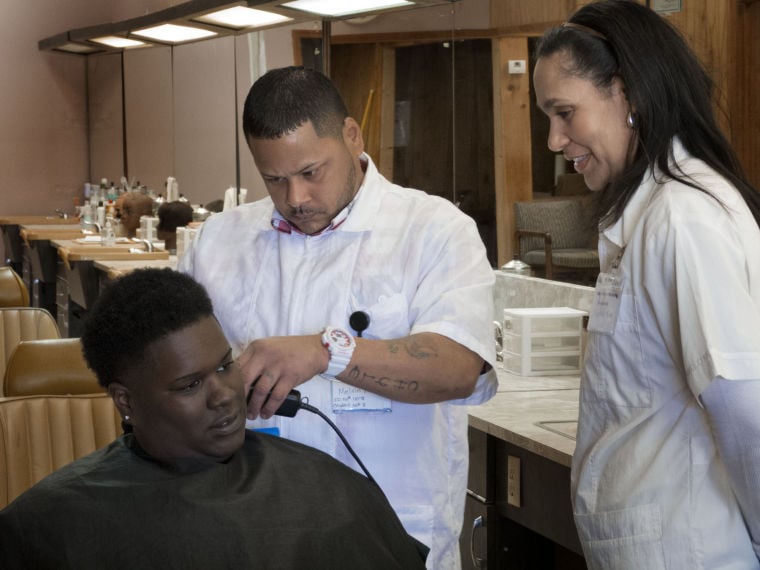 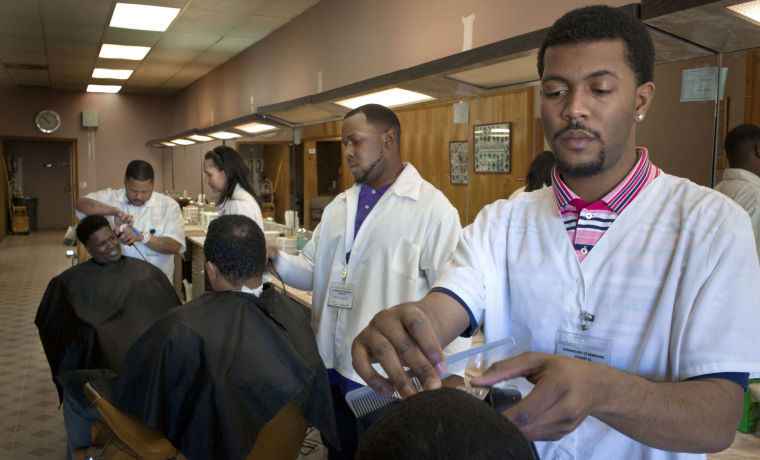 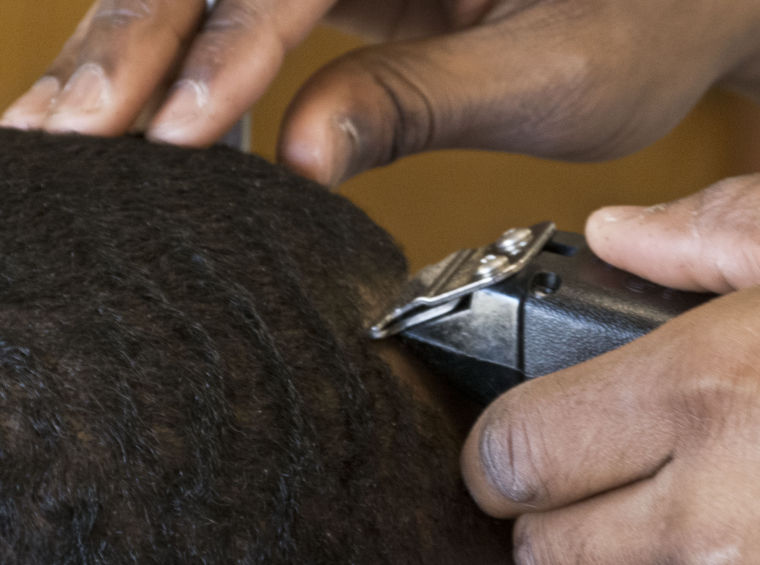 A barbering student trims a customer's hair at the Pyramid Institute of Barbering in Winston-Salem, Thursday, Feb.21, 2013. 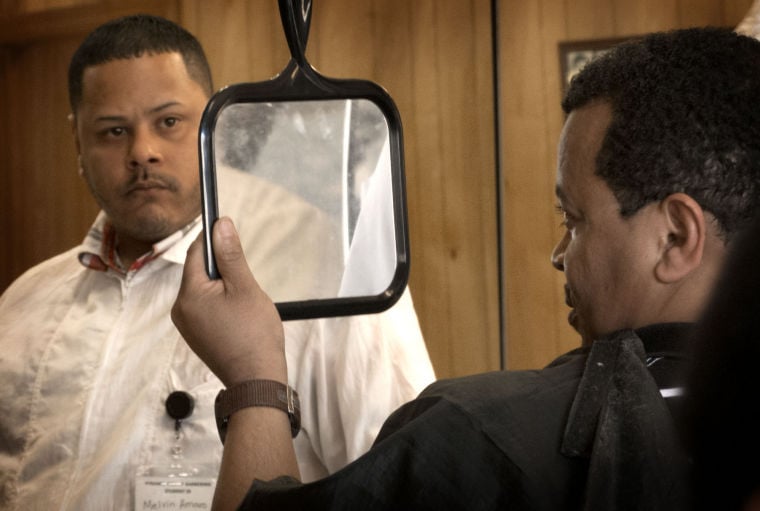 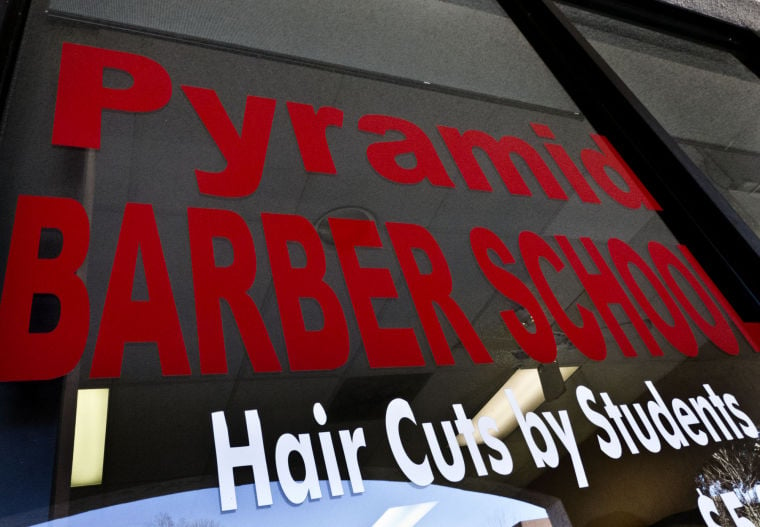 The Pyramid Barber School in Winston-Salem.

His students tease him about sitting on the porch after he retires, but Ghuneem Furqan has other plans.

He’ll close the Pyramid Institute of Barbering, the barber school he’s run for the past 37 years, on Thursday. After that, he plans to rest up a bit, then do some traveling.

“I want to visit the students,” said Furqan.

At 75, Furqan is retiring for health reasons.

Furqan sounds proud when he talks about his former students and how they’ve set up shop throughout the Triad. He rattles off the towns — Reidsville, Greensboro, Winston-Salem, Lexington, Thomasville, Salisbury, Mount Airy and Elkin.

Michelle King Clinton, an instructor at Pyramid, said Furqan always told people that once they learned barbering, they should get their license and become their own boss.

He’d tell them, “‘Once you get licensed and get out in the world, you can always make money no matter where you are or what you’re doing. You should always be able to eat,’” Clinton said.

When Pyramid closes, Winston-Salem will be left with just one barber school — Winston-Salem Barber School at 1531 Silas Creek Parkway.

There used to be three in the city, but Triad Barber School at 4221 N. Liberty St. closed in August 2012 after the N.C. Board of Barber Examiners revoked its license for several violations, including problems with record keeping, a state official said.

A graduate of the old Modern Barber College in Winston-Salem, Furqan has been a barber since 1960. That same year, he legally changed his name to Ghuneem Furqan from George Fulp when he became a Muslim.

He opened Pyramid in 1978 on Ogburn Avenue.

“I decided to go ahead and take the test and become an instructor,” he said.

The school moved several times over the years. It was on the corner of Patterson Avenue and 7th Street for 19 years before opening at its current location at 5029 University Parkway in Northchase Shopping Center six years ago.

Furqan did double duty for 17 years, running his school and working in research and development for R.J. Reynolds Tobacco Co. He retired from Reynolds in 1994.

Furqan recalled how there were only three barber schools in North Carolina when he started his school, but now there are about 30.

He estimates Pyramid has about 8,000 graduates.

Of his last three students, one graduated Feb. 23; two will transfer to other barber schools.

Freeman J. Roebuck has been getting his hair cut at the school for about 20 years.

“I keep coming here,” Roebuck said. “I haven’t been to a barber shop in over 20 years.”

Dominique Walker of Winston-Salem is one of Pyramid’s last graduating students.

“It makes me feel good,” Walker said. “I’ve been here since April and I’ve put in a lot of time.”

Clinton graduated from Pyramid in 1988 and has been cutting hair ever since. She has been an instructor for Furqan for the past 19 years.

She said that Furqan has turned a lot of “guys into men.”

Furqan said he’s going to miss the young people the most.

“They kind of keep me alive, I guess,” he said.

This human skull was mysteriously found in an Italian cave

Beirut explosion: 'There are lots of patients suffering from anxiety, depression and PTSD'

Beirut explosion: 'There are lots of patients suffering from anxiety, depression and PTSD'

Owner Ghuneem Furqan and instructor Michelle King Clinton of the Pyramid Institute of Barbering talk about the school.

Ghuneem Furqan (left) in his Pyramid Institute of Barbering on University Parkway in Winston-Salem, NC,Thurs., Feb. 21, 2013, will retire Feb. 28 and close the school. Instructor Michelle King- Clinton (center) was overseeing barber student Dominique Walker as he cut the hair of customer Kelly Stevenson.

A barbering student trims a customer's hair at the Pyramid Institute of Barbering in Winston-Salem, Thursday, Feb.21, 2013.

The Pyramid Barber School in Winston-Salem. 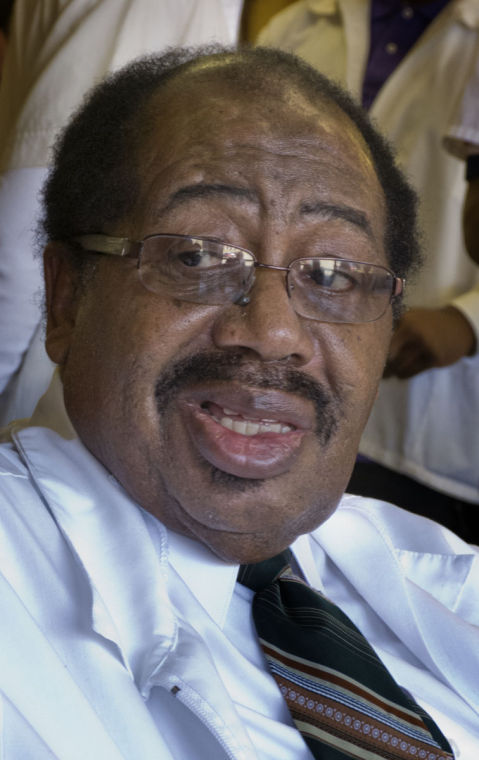