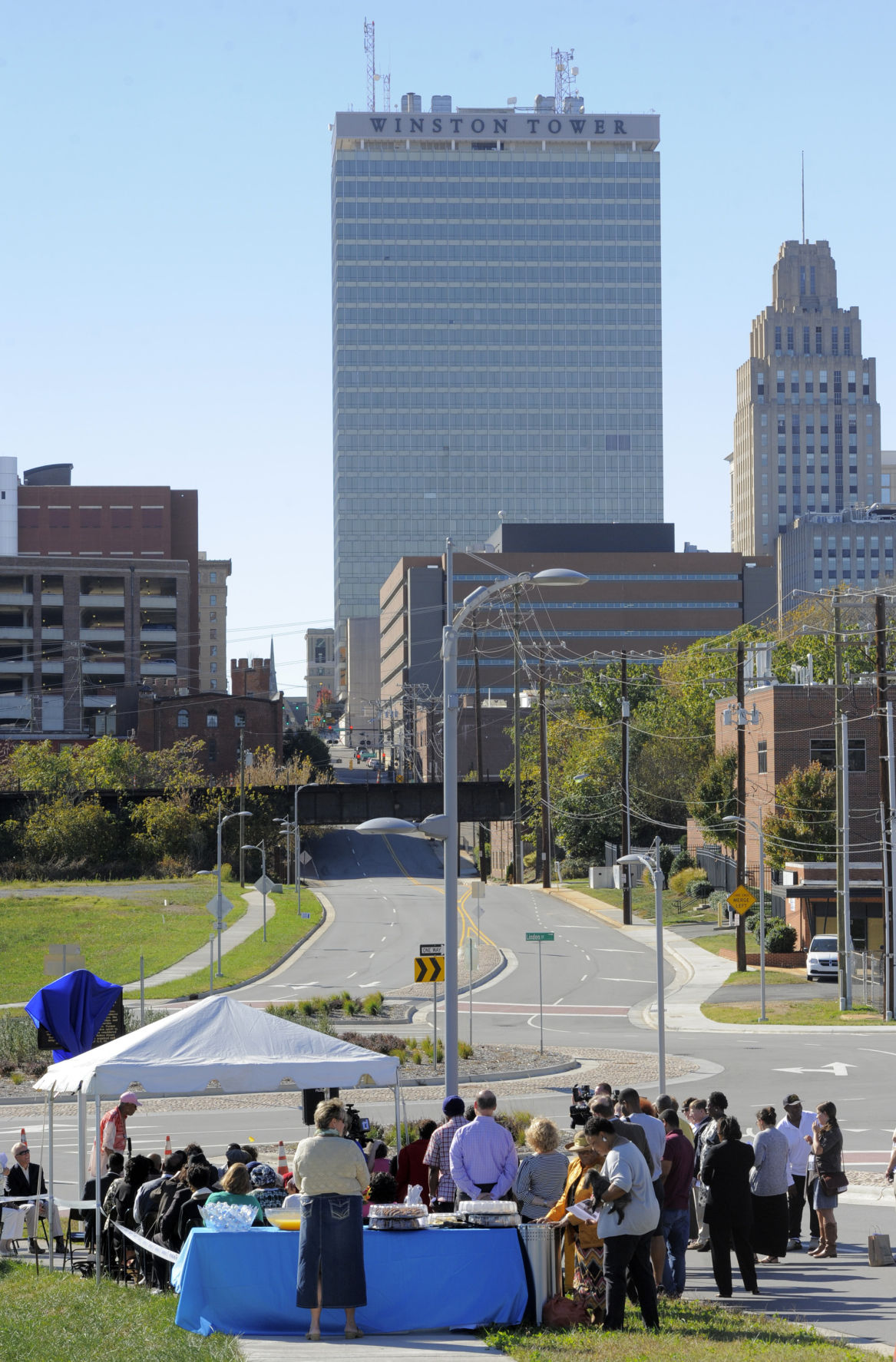 The City of Winston-Salem Historic Marker Unveiling for the Belews Street Neighborhood, at the intersection of Third Street and Research Parkway in Winston-Salem, N.C., Sunday, Oct. 26, 2014. 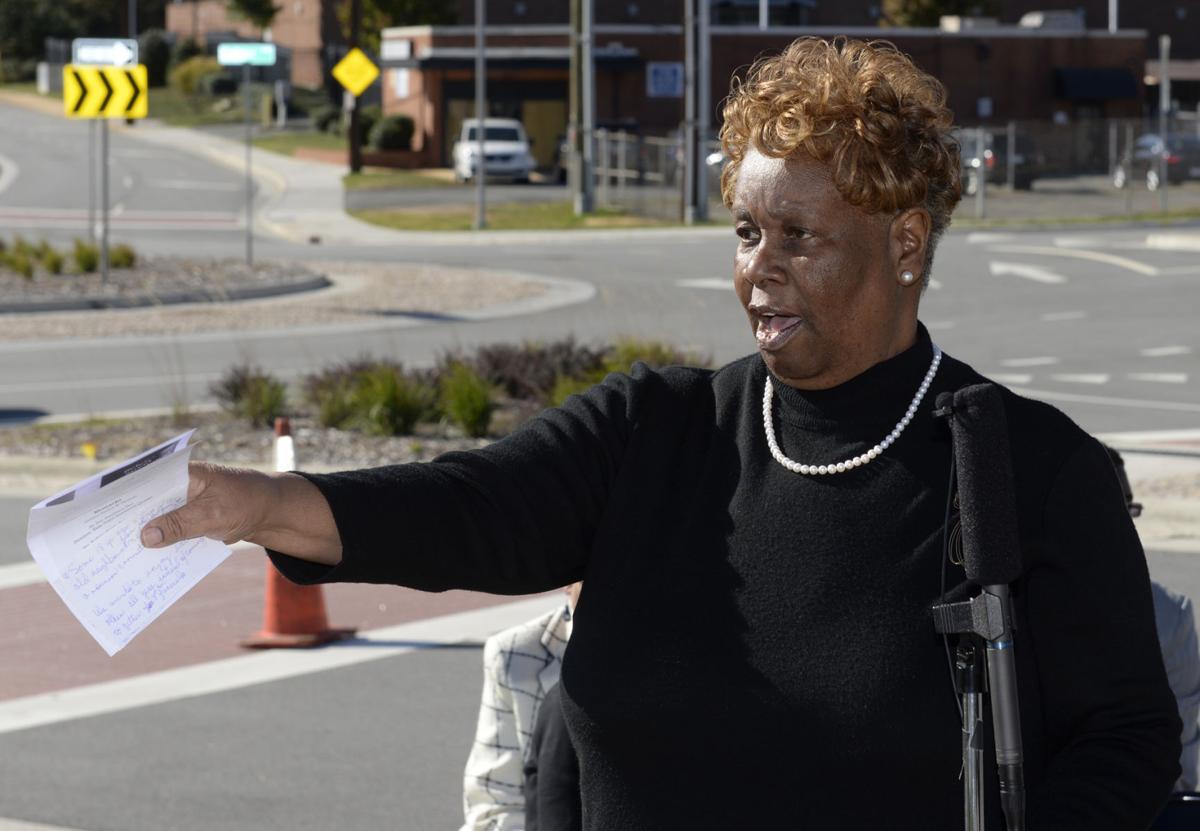 Barbara Morris, a former resident of the Belews Street neighborhood, speaks during an unveiling of a marker recognizing the neighborhood, at the intersection of Third Street and Research Parkway, Sunday, Oct. 26, 2014. 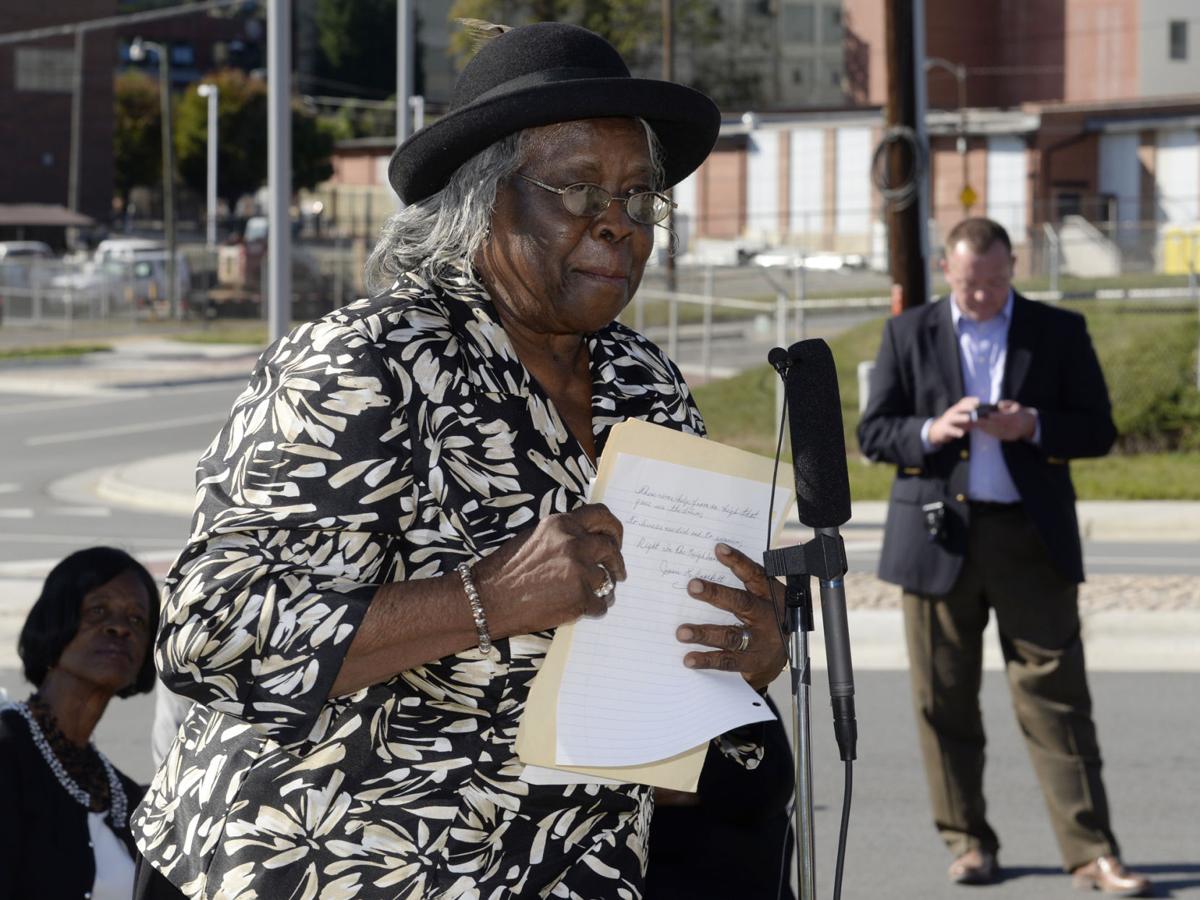 Jessie Crockett reads her poem "Right In the Neighborhood" during the City of Winston-Salem Historic Marker Unveiling, for the Belews Street Neighborhood, at the intersection of Third Street and Research Parkway in Winston-Salem, N.C., Sunday, Oct. 26, 2014.

Former residents of the Belews Street area still have vivid memories of the historically black neighborhood that used to stand just east of downtown.

On Sunday, they had a chance to share some of those memories and to see the neighborhood recognized.

Residents joined representatives from the city, Forsyth County Historic Resources Commission and Wake Forest Innovation Quarter at the southeast corner of Third Street and Research Parkway for the unveiling of a historic marker recognizing the Belews Street neighborhood.

“You have to know where you’ve come from to know where you’re going, so keep the history alive,” said Barbara Morris, a former resident and secretary of the Belews Street Reunion who has for years advocated for recognition of the neighborhood’s history.

Morris kept history alive by sharing her memories of the area. She told of young men picking up coal that fell from the trains, of women selling candy apples and sewing outfits without patterns, of her great-grandmother’s conversations with neighbors over her garden fence.

Now a marker also gives a brief history of the area.

The area is home to the intersection of U.S. 52 and Business 40 and land for the Wake Forest Innovation Quarter, but it used to contain a vibrant community of houses, apartments, churches, schools, grocery stores, restaurants and other businesses.

“Former residents remember a strong, cooperative spirit in the neighborhood where everyone was considered family,” the marker reads in part.

The Belews Street area homes were built in the early 1900s.

“By the early 1940s, the mixed-race neighborhood became one of predominantly working-class African-Americans, many of whom were employees of the local tobacco industry,” the marker explains.

In 1958, the neighborhood’s several hundred families had to leave to make way for a city urban-renewal project and the construction of U.S. 52, made possible by federal and city dollars. The neighborhood was razed.

State Sen. Earline Parmon pointed across the street to where her house used to stand.

“As I look about, I remember the rich community. It was really community in those days,” Parmon said.

She recalled some of the businesses that used to be located in the area.

She said when urban redevelopment bought houses and helped residents find other places, her grandfather refused to leave. His was one of the last houses standing, and the city threatened to pull the house down with him in it. The family was finally able to get him to relent.

“That’s how precious the property was, and what the community meant to people,” Parmon said.

Parmon said afterward that it is good to see something positive there, and to see the Innovation Quarter bringing life back to the area.

Residents have asked for years for a historic marker, and many people came together to make the project possible.

She was struck by how many people kept adding to the crowd at the ceremony.

“I just can’t believe it,” Morris said of the dedication. “It’s amazing.”

Last year, when the City-County Planning Board approved the renaming of Linden Street to Research Parkway, it recommended to the city that the neighborhood be commemorated in some way. Morris spoke before the planning board then.

Winston-Salem City Council Member Derwin Montgomery said he thought it was important to ask questions about the neighborhood and what the city had done to memorialize that community.

Linda Dark of the Forsyth County Historic Resources Commission said the historic marker program started more than 10 years ago, and 35 markers have been placed throughout the community thus far.

She said the Belews Street neighborhood represents an important part of the community’s heritage, and now everyone will be able to see where it was.

“Although the physical structures are gone now, we have it here,” Dark said, patting her heart. “We have it in our minds and in our hearts.”

Eric Tomlinson, president of Wake Forest Innovation Quarter, was there on behalf of the Quarter, who helped fund the marker.

“We believe it’s our duty to recognize and to celebrate the history of this place, and this is one of the first markers that has been erected,” Tomlinson said.

He said the 30 acres near the research parkway will become revitalized as a new neighborhood for Winston-Salem with residential, retail, business and industry participating in the rebirth.

“That change will continue to recognize the unbelievable and interesting history that’s gone on here before us,” Tomlinson said.

At the end of the ceremony, former residents were invited to come up to share their stories.

One of them was Napoleon Sherard, whose father ran a restaurant, pool room and dance hall.

“We really had a community of people together,” Sherard said.

He pointed to some of his friends in the crowd and laughed as he told the story of accidentally ruining a friend’s bicycle that he had gotten for Christmas.

Sherard said afterward that the marker dedication was “really grand.” He said he still thinks about how the neighborhood used to be.

The city of Winston-Salem unveils a historic marker recognizing the Belews Street neighborhood, which used to stand just east of downtown.

The City of Winston-Salem Historic Marker Unveiling for the Belews Street Neighborhood, at the intersection of Third Street and Research Parkway in Winston-Salem, N.C., Sunday, Oct. 26, 2014.

Barbara Morris, a former resident of the Belews Street neighborhood, speaks during an unveiling of a marker recognizing the neighborhood, at the intersection of Third Street and Research Parkway, Sunday, Oct. 26, 2014.

Jessie Crockett reads her poem "Right In the Neighborhood" during the City of Winston-Salem Historic Marker Unveiling, for the Belews Street Neighborhood, at the intersection of Third Street and Research Parkway in Winston-Salem, N.C., Sunday, Oct. 26, 2014.