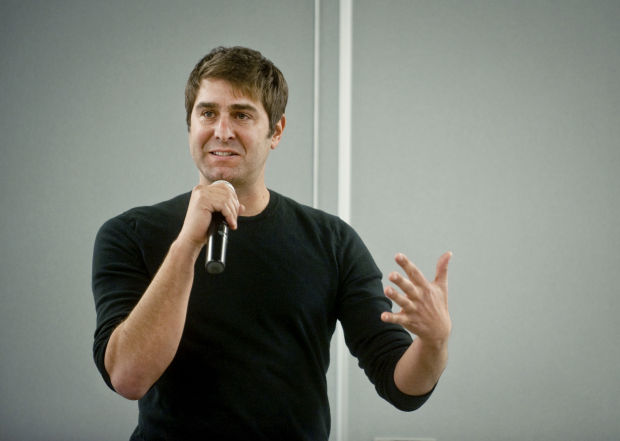 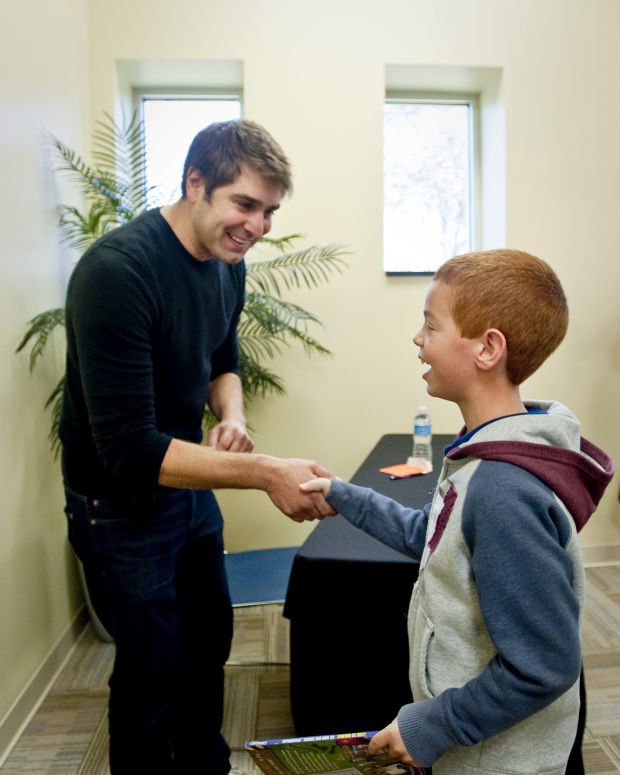 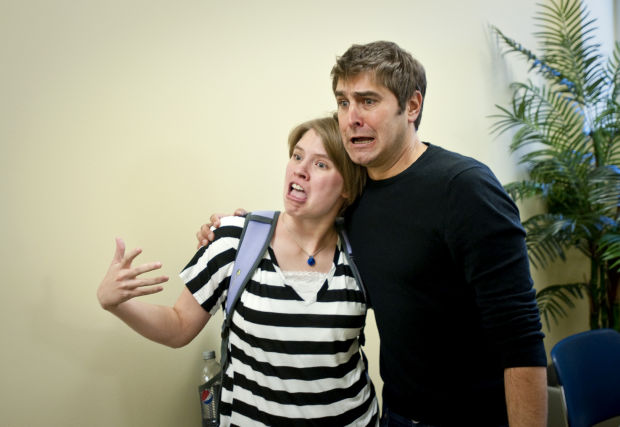 Abigale Miles and Tory Belleci of the tv series "MythBusters" make funny faces as they pose for a photo together following Belleci's talk at Davidson County Community College Monday, November 11, 2013.

When Tory Belleci took the podium at Davidson County Community College, he promptly apologized to anyone in the audience who had come to see him blow things up.

“I asked if they would let me, and they said no,” he joked to an audience of more than 200, many of them fans of the show “MythBusters” on the Discovery channel and ranging in age from small children to seniors.

His appearance was part of the school’s “Campus Speaker Series,” and he mixed an educational message — about the importance of science, physics and math — with amusing behind-the-scenes anecdotes about “MythBusters.”

Belleci is one of the costars on the show, which follows a team that tests urban legends and clichés from Hollywood movies by building elaborate devices, wrecking things and causing general — but controlled — mayhem.

And it’s a dream job for him.

“That job didn’t exist when I was a kid,” he said. But even before there was a “Mythbusters,” Belleci said he was fascinated with pyrotechnics.

Growing up in Monterey, Calif., he became fascinated with movies and special effects at a young age, making his own Super 8mm films when he was 11 and learning how to make his own flamethrower and pipe bombs. He eventually channeled his inventive energy working for Industrial Light and Magic, creating special effects and building models for such films as the “Star Wars” prequels, the “Matrix” films and “Galaxy Quest,” among others.

He met Jamie Hyneman, a special-effects artist who would later recruit him for “MythBusters.” Belleci started on the show behind the scenes when it started in 2003, but within a few months had moved to the front of the camera as one of the team members.

Belleci showed clips from the TV show and his unaired audition reel, in which he snuck a microphone into a Mexican restaurant to test whether women pass gas, then answered questions from the audience.

Many of the questions came from kids or young adults who had grown up watching the show and asked about specific episodes, favorite moments (riding a rocket-powered surfboard across a lake), scariest moments (being trapped in a coffin with snakes), least favorite tests (eating hot chili peppers and trying various heat remedies), and dream stunts they haven’t done (going over Niagara Falls in a barrel).

One young boy asked about “the boringest thing” they had ever done, which led Belleci to tell the story of a test of whether a nonrolling stone gathers moss.

After his presentation, Belleci sat at a table signing autographs, chatting with fans and posing for photographs.

Sally George, a nursing student at the college, brought her three children — son Henry, 8, and daughters Riley, 12, and Sarah, 15. Henry brought along his copy of a “MythBusters” book to get it autographed.

“They watch the show all the time,” George said.

And Will Watson, 11, came with his sister Meredith, 15, and their mother, Heather, to see the presentation. Will got his STEM (Science, Technology, Engineering and Mathematics) Camp T-shirt autographed.

Will said that he loves the show because he enjoys “science, and just watching stuff being blown up.”

“I just like the science aspect,” Meredith said before admitting that she, too, enjoys watching stuff being blown up on the show.

“MythBusters” has tested “well over 200 myths” to date, Belleci said. But he’s not worried about running out of topics.

“Every day,” he said, “there’s another ridiculous story that shows up in the news.”

MythBusters is coming to Greensboro on Wednesday, December 18, 2013 at Greensboro's War Memorial Auditorium.

Israel strike in Gaza destroys building with AP, other media

Israel strike in Gaza destroys building with AP, other media

Do you watch Mythbusters?

Abigale Miles and Tory Belleci of the tv series "MythBusters" make funny faces as they pose for a photo together following Belleci's talk at Davidson County Community College Monday, November 11, 2013.