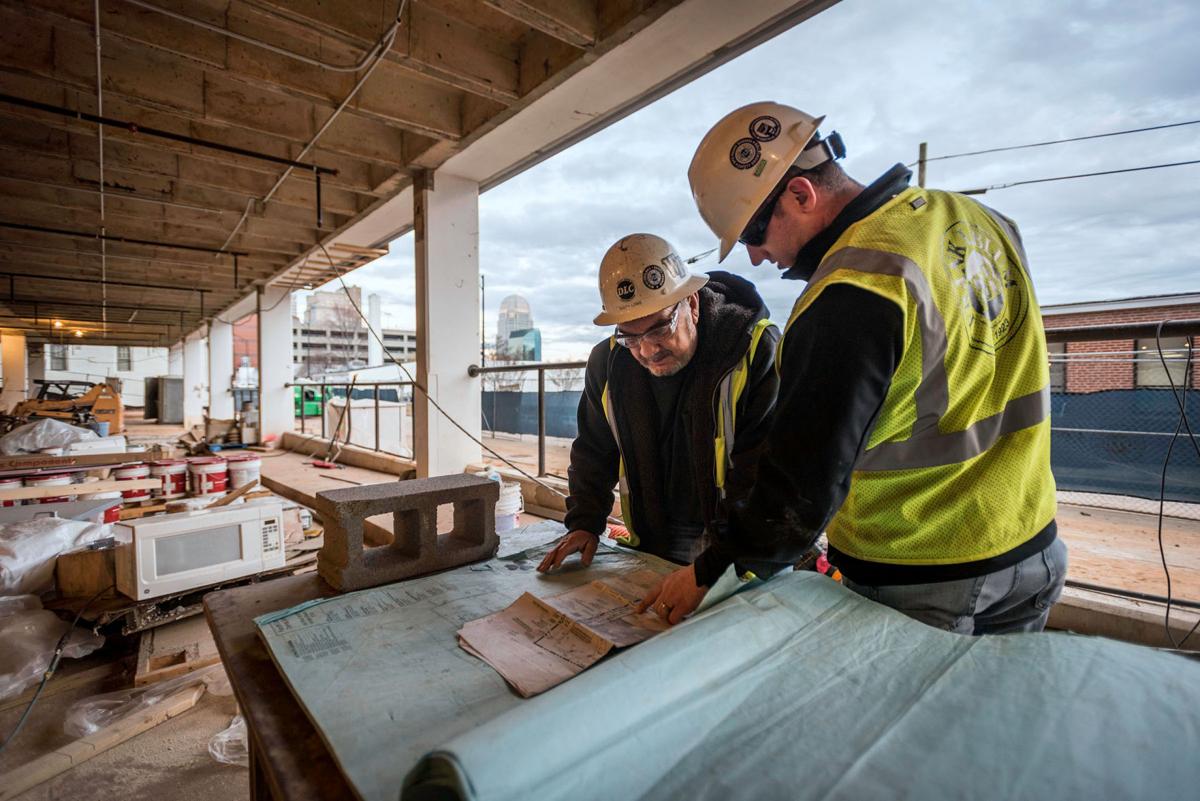 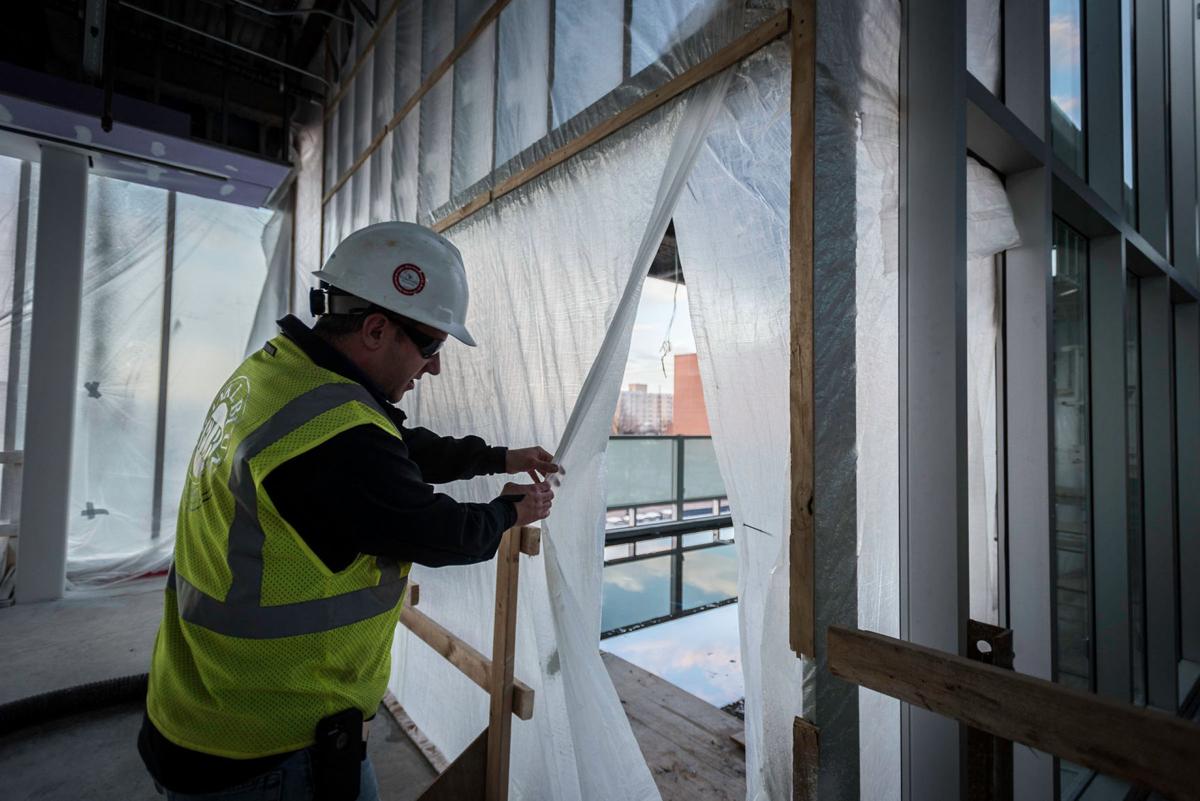 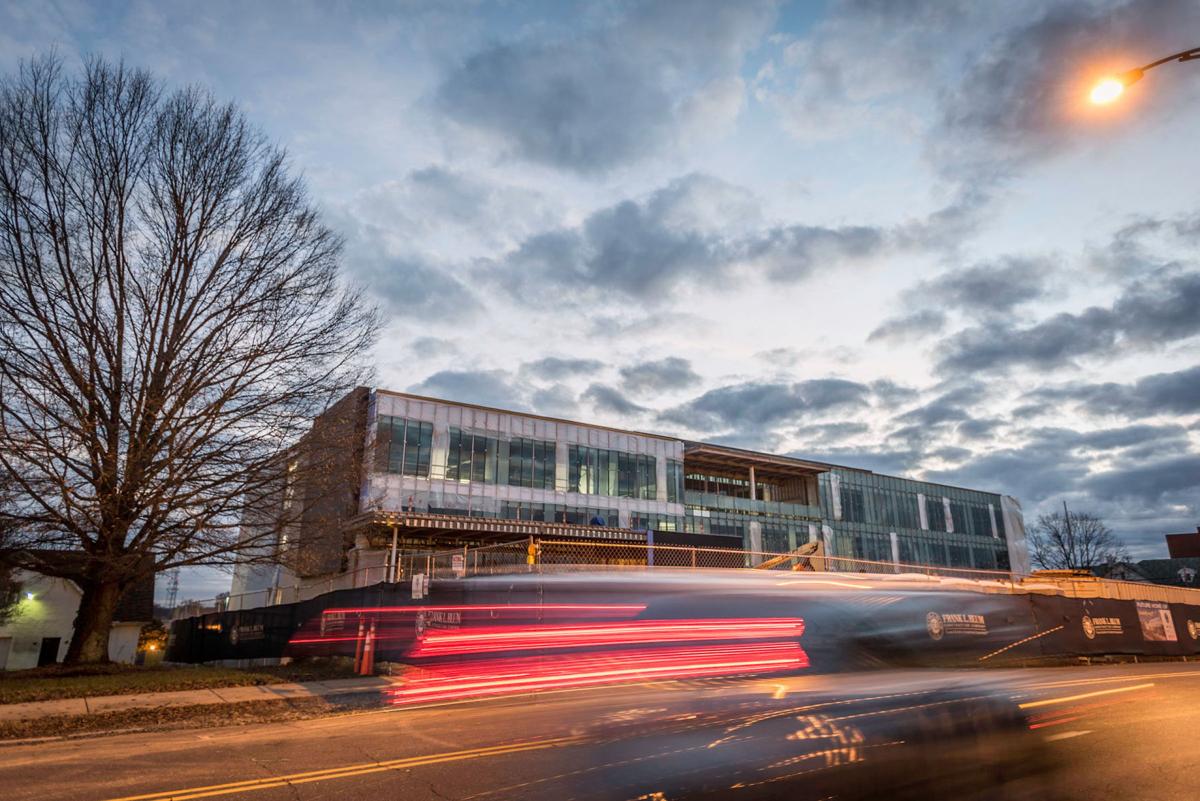 A car drives past the Forsyth County Central Library on Wednesday, Dec. 7. 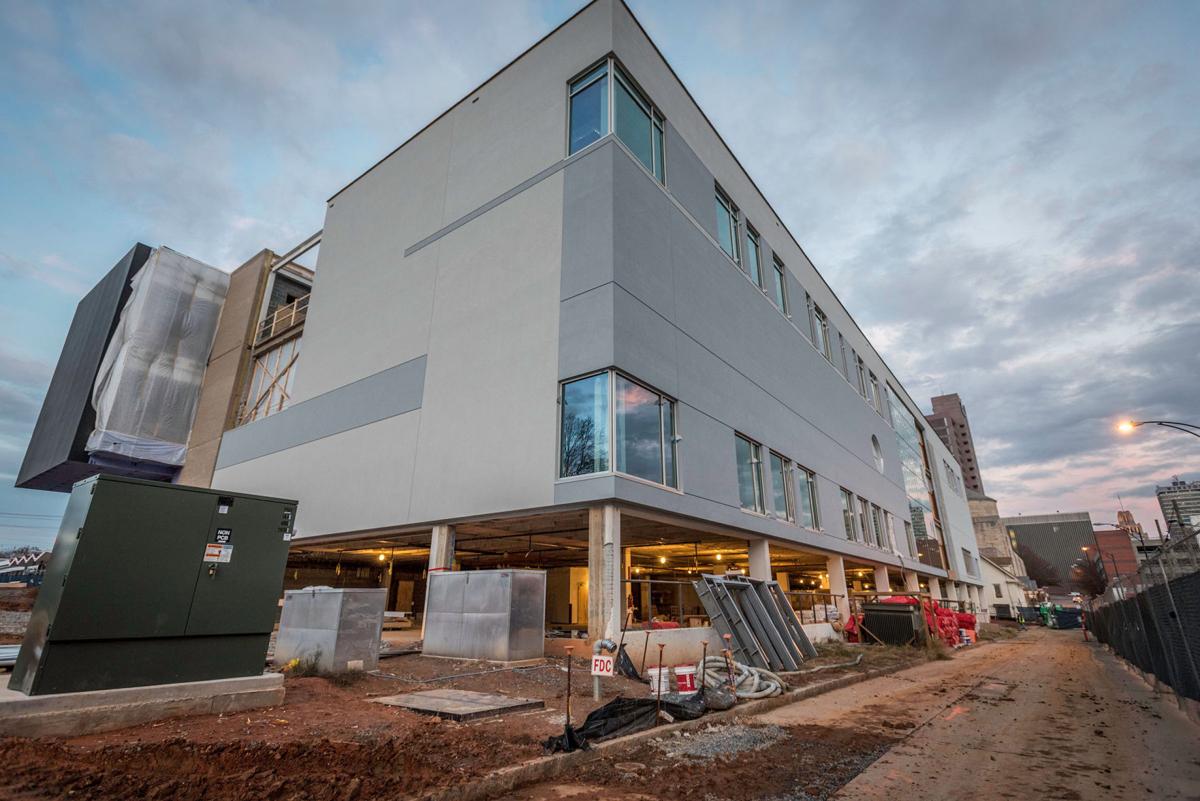 The rear view from 4½ Street of the Forsyth County Central Library, where the parking deck entrances will be, on Wednesday, Dec. 7, at 660 5th St. in Winston-Salem 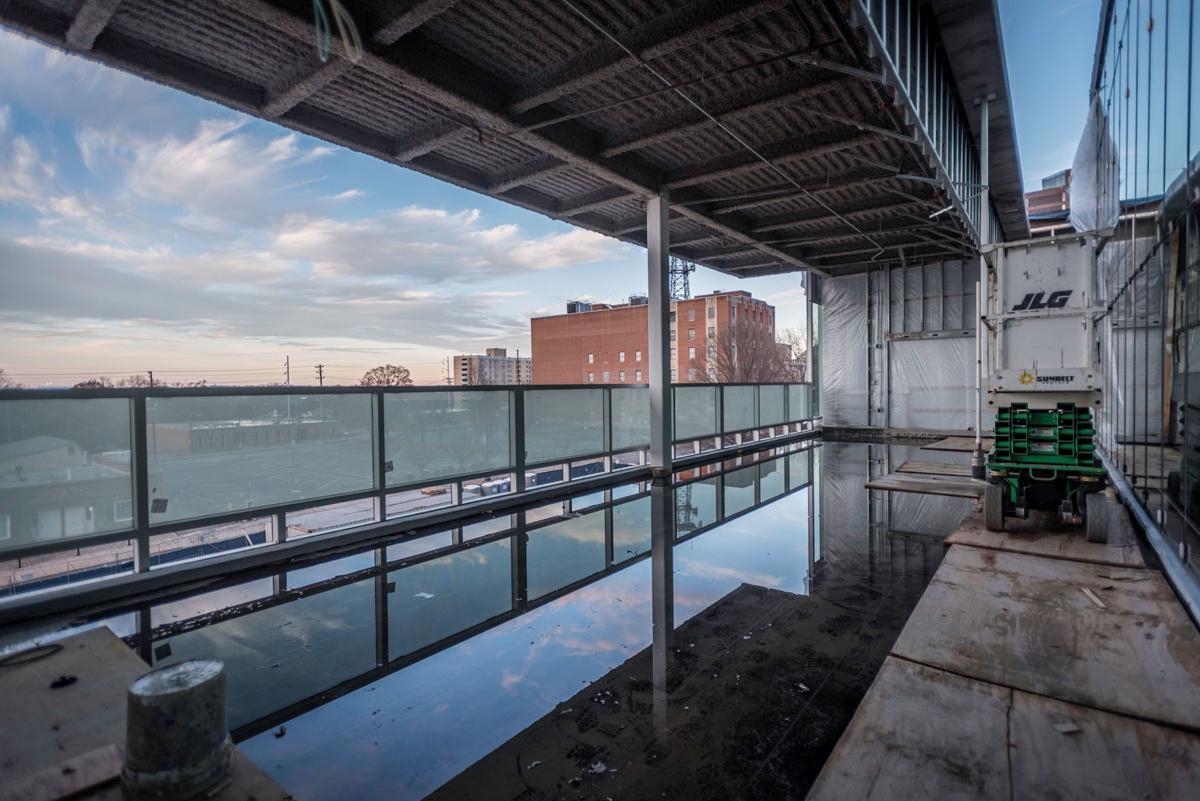 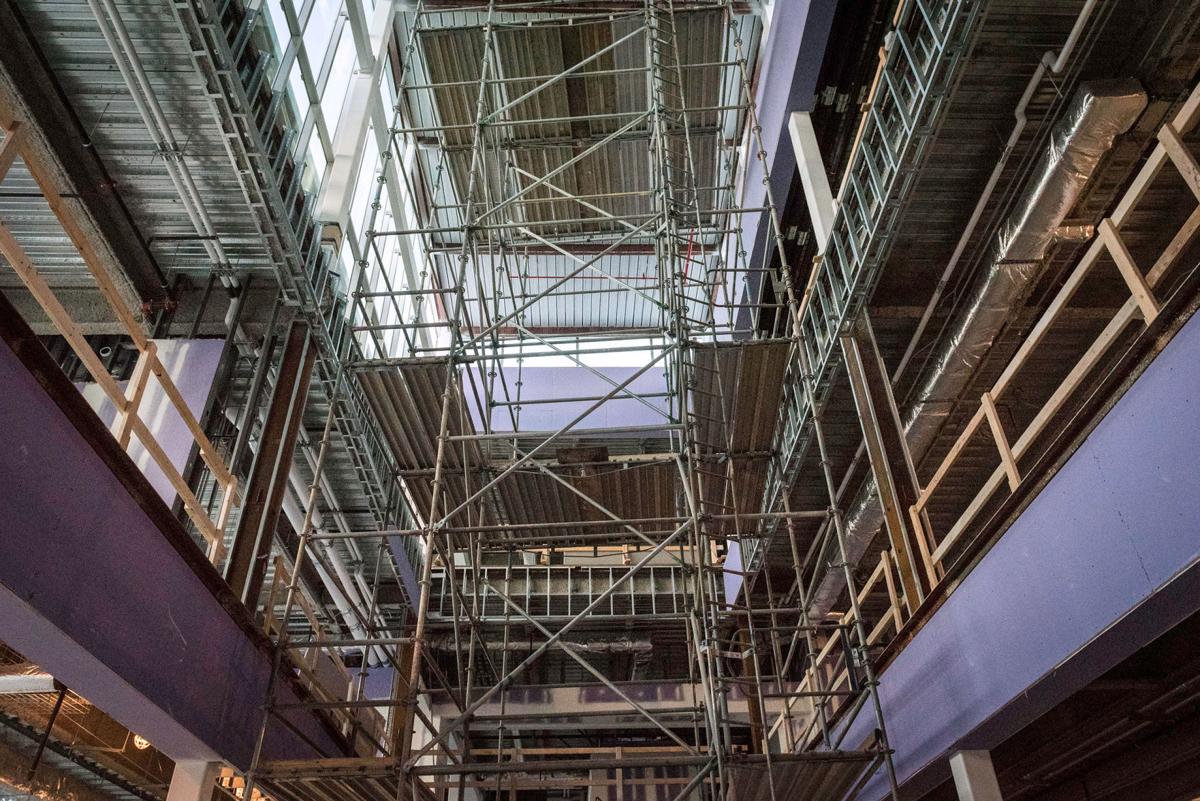 The Atrium area of the Forsyth County Central Library on Wednesday, Dec. 7, 2016 at 660 5th St. in Winston-Salem, N.C. All of the wooden handrails will eventually be replaced by glass handrails.

A quick drive down the 600 block of Fifth Street in downtown Winston-Salem will show that a lot can happen in a year.

“We’ve got most of the facades up and plumbing and electric is being roughed in,” Gill said. “We’ve got the permanent power turned on to run temporary heat during the winter. So we’re going as hard as we can to meet that mid-summer (2017) deadline.”

At the same time last year, workers had just completed stripping the old Central Library to the girders and concrete floors, readying the frame for renovation.

The Central Library closed to the public in October 2014, and crews began moving furniture and removing hazardous materials in preparation for demolition, while Ratio Architects and Steele Group Architects finalized the design.

From the entrance, the children’s section — with book stacks, computers and its own assembly room — will be to the left on the first floor. Computer labs and additional workrooms are near the back and a café is to the right.

The third floor will house the library’s general collection and its prime reading spaces. The Forsyth Reading Room will have fireplaces while a covered terrace will allow people to sit outside and enjoy views of Pilot Mountain and other areas to the north.

The third floor patio was named for the Winston-Salem Rotary Club after the club pledged $100,000 toward the library’s renovations.

County commissioners have approved Onepath Systems to outfit the new library with its audio and visual needs for $548,161.46.

Commissioners have voted on companies to furnish the new library as well. The county will buy shelving and end panels from Carolina Furnishing and Design for a total of $319,899.82; open line furniture from Furniture Solutions Plus for $559,573.27; and systems furniture from PMC Commercial Interiors for $70,480.78. All three companies are located in North Carolina.

Parking will still be available under the back of the building and along the streets.

A car drives past the Forsyth County Central Library on Wednesday, Dec. 7.

The rear view from 4½ Street of the Forsyth County Central Library, where the parking deck entrances will be, on Wednesday, Dec. 7, at 660 5th St. in Winston-Salem

The Atrium area of the Forsyth County Central Library on Wednesday, Dec. 7, 2016 at 660 5th St. in Winston-Salem, N.C. All of the wooden handrails will eventually be replaced by glass handrails.