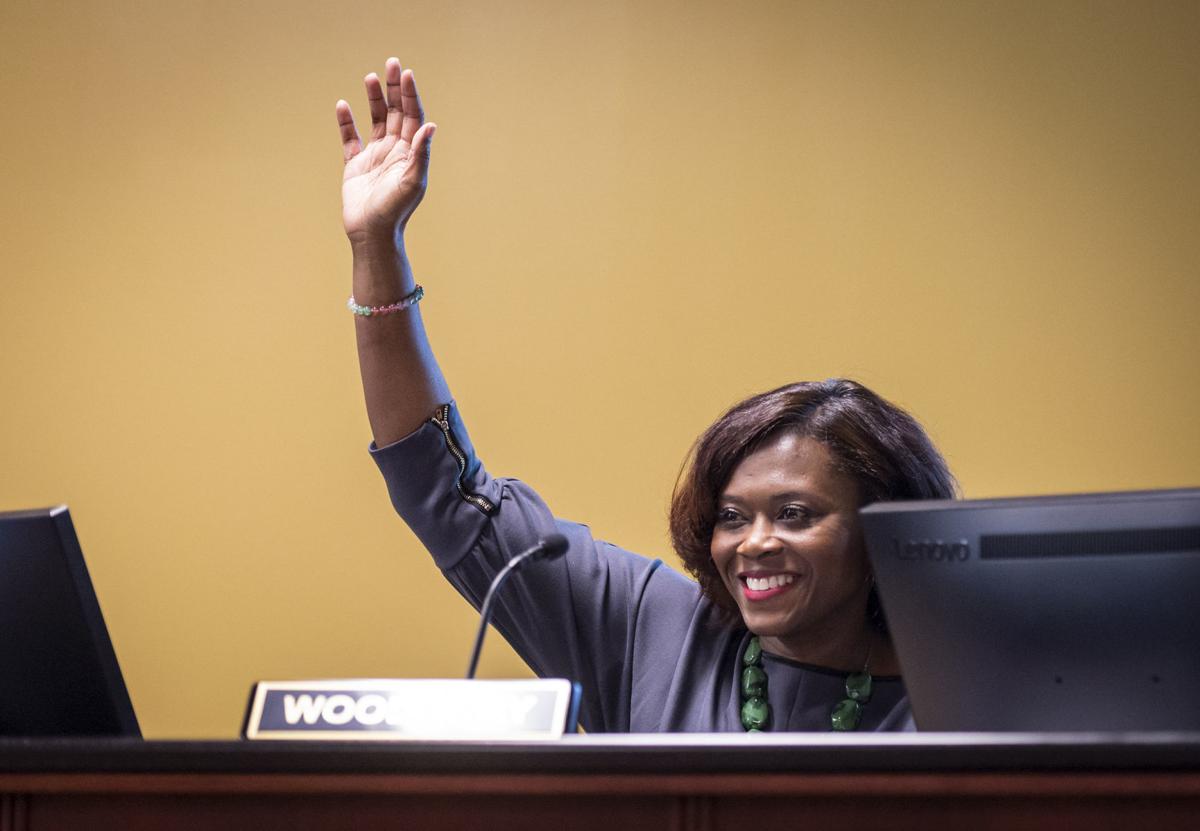 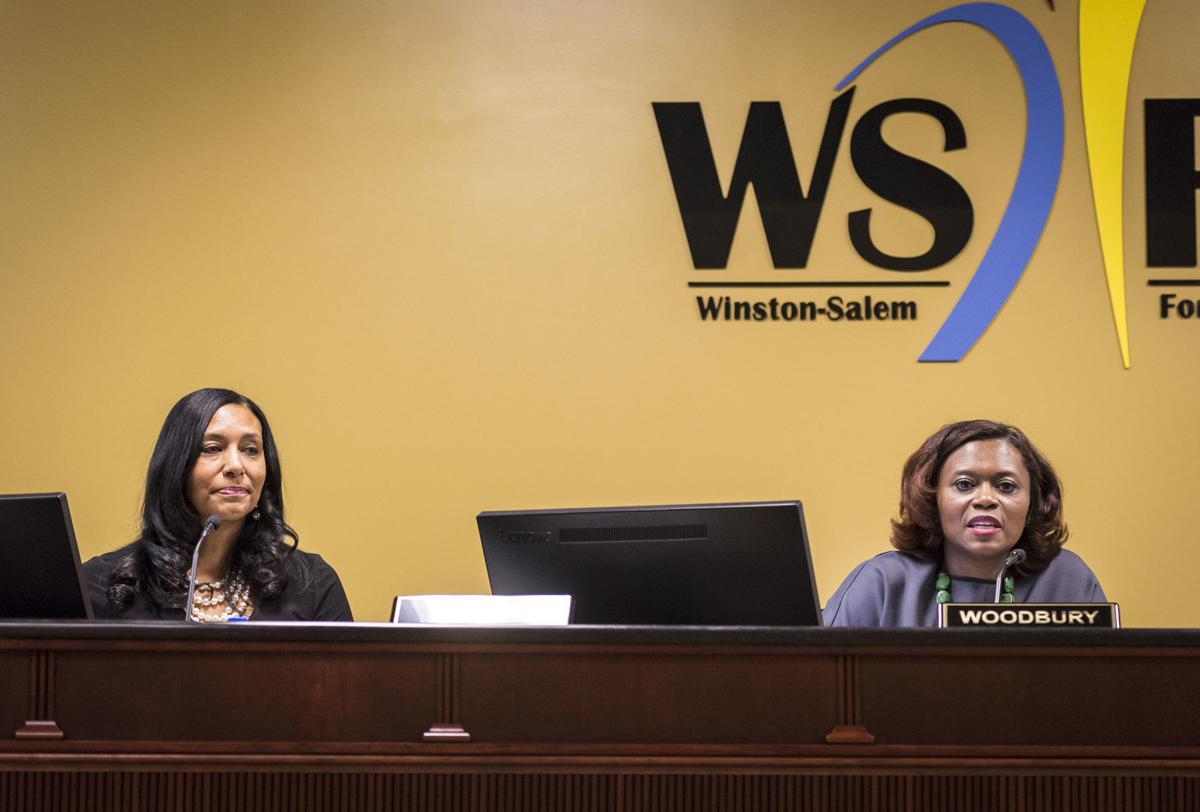 Malishai Woodbury (right), chair of the Winston-Salem/Forsyth County Board of Education, and Barbara Burke, co-chair, during Thursday’s meeting. 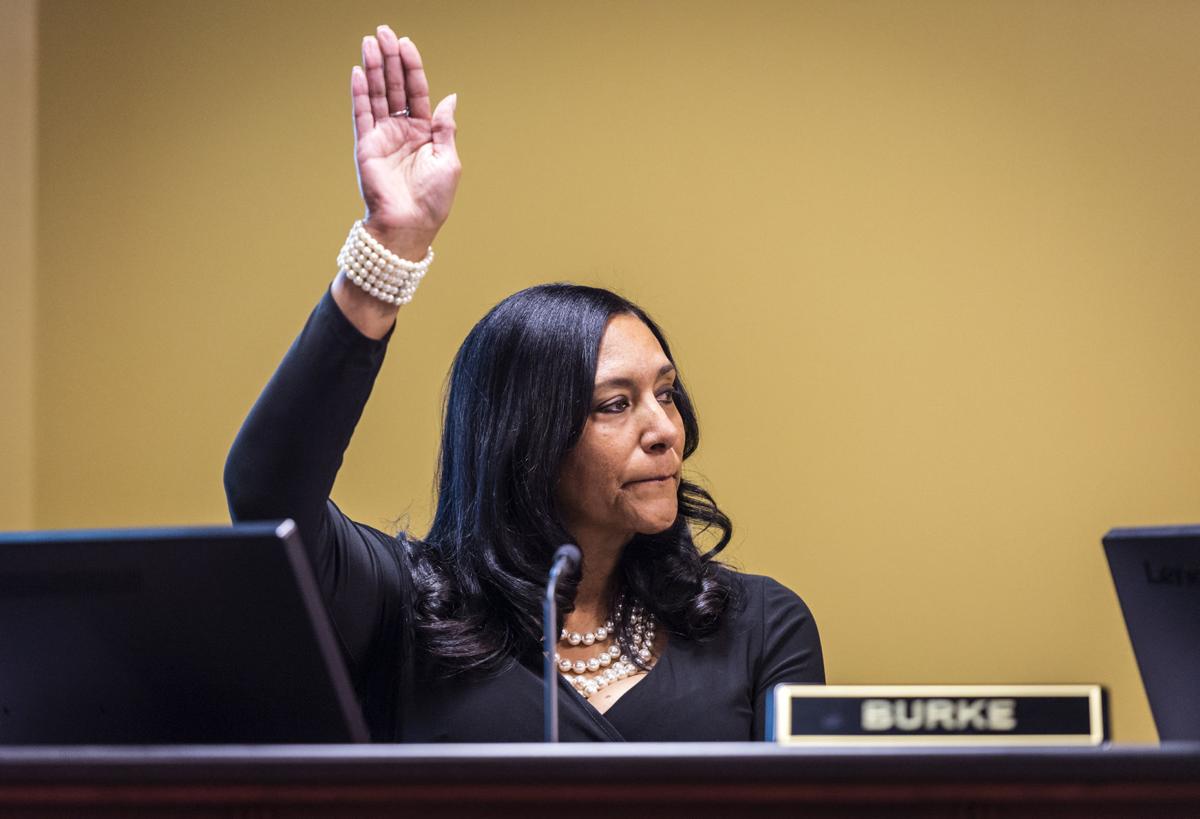 Barbara Burke, co-chair of the Winston-Salem/Forsyth County Board of Education, raises her hand during a board meeting on Thursday in Winston-Salem. 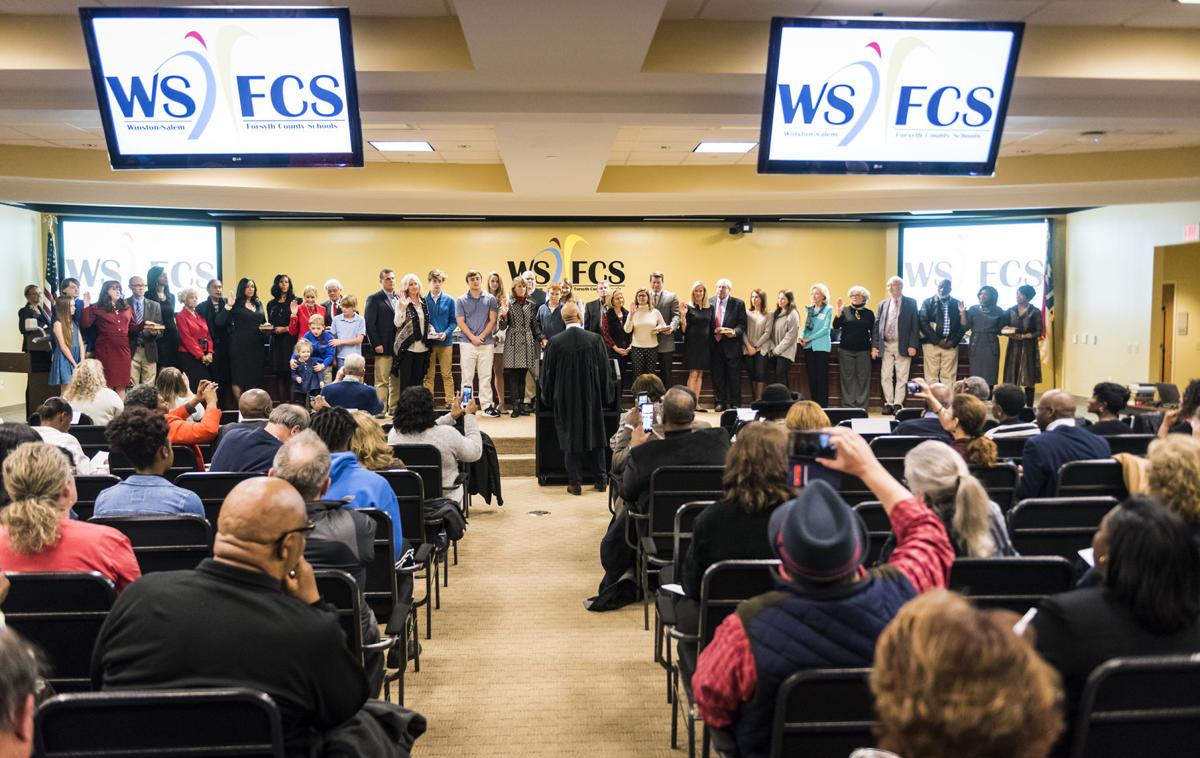 Todd Burke, senior resident Forsyth Superior Court judge, swears in the members of the Winston-Salem/ Forsyth County Board of Education on Thursday.

For the first time in the history of Winston-Salem/Forsyth County Schools, the school board is made up entirely of women and the woman chosen to lead the board is African American.

Malishai Woodbury was elected as chairwoman of the school board Thursday night.

“I feel so grateful and I feel so blessed and supported from this entire community,” she said after the meeting.

Barbara Hanes Burke will serve as the vice-chairwoman.

Jones previously served as the chairwoman of the board. Former board member Robert Barr was the previous vice-chairman.

Clark, Jones and Motsinger were the only ones to not vote for Woodbury or Burke.

Both Clark and Motsinger nominated Jones for the chair position, citing her experience.

“I believe that the district is best served by having a chair who is experienced and who knows the district,” Motsinger said.

“In this time of transition, it would be wise of this board to consider choosing stability and proven leadership and a person who is honest and operates with integrity,” Clark said. “That’s why I will be supporting Dana Jones for chair.”

Moving forward, Woodbury said after the meeting that as chairwoman she will keep lines of communication with her fellow board members open and make sure they are unified.

“I know that we have some difference by way of things that we’re interested in, concerned about, but I think at the end of the day we’re all unified for children,” she said.

After the meeting, Clark said in a statement that the priority of this new board should be finding consensus on issues that make the district better and improve outcomes.

“It is time to wipe the slate clean and roll the sleeves up and do the work of the district — putting students in the center of it all.”

Before the meeting, Action4Equity held a press conference outside the Education Building to recommend areas of focus to the newly elected board.

The organization had been vocal with the last board on issues of inequity and safe school environments for students, teachers, staff and the community. They are optimistic that progress can be made with this new board, said Kellie Easton, coordinator for Action4Equity.

The three areas they addressed at the press conference and to the board during public comment were equity, the achievement gap and healthy and safe school infrastructure.

“This is not an exhaustive list,” Easton said. “We will continue to work with the community to update this list as we achieve the points that are outlined. With the support of our superintendent, the school board and other key district leadership, we believe we can make Winston-Salem/Forsyth County Schools a model of equity in North Carolina.”

Action4Equity filed a complaint against the school board and district over its handling of the indoor air-quality concerns at Ashley Academy for Cultural and Global Studies in August. It was filed on behalf of the Southern Coalition for Social Justice to the U.S. Department of Education’s Office for Civil Rights.

“We are excited to work with the board of education, including the new members who will be sworn in tonight, to take some of these same steps and not only equal what’s being done in other districts, but also create a model that other districts can start to follow,” said Peggy Nicholson, co-director for the Youth Justice Project of the Southern Coalition for Social Justice.

Malishai Woodbury (right), chair of the Winston-Salem/Forsyth County Board of Education, and Barbara Burke, co-chair, during Thursday’s meeting.

Barbara Burke, co-chair of the Winston-Salem/Forsyth County Board of Education, raises her hand during a board meeting on Thursday in Winston-Salem.

Todd Burke, senior resident Forsyth Superior Court judge, swears in the members of the Winston-Salem/ Forsyth County Board of Education on Thursday.