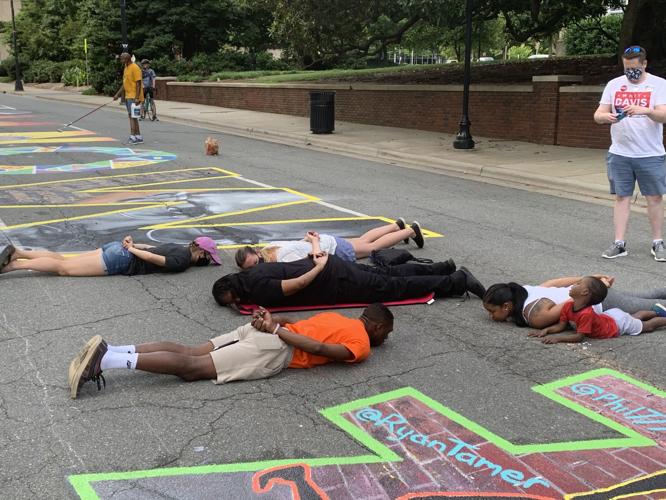 Frankie Gist, Arnita Miles and other volunteers lay on the ground for 8 minutes, 46 seconds in memory of George Floyd. 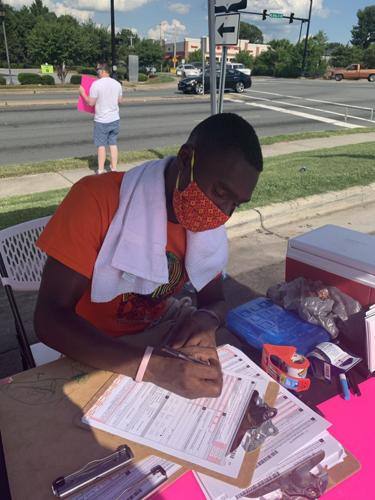 Frankie Gist fills out a form at a registration rally held Sunday in Winston-Salem. “I believe in the power of protesting, but we need to do more to benefit the community, so we can help make a change in our community and our world.”

Organizers of some recent local rallies and marches gathered Sunday afternoon to encourage people to register to vote. Several tents were set up in front of the East Winston Shopping Center on Martin Luther King Jr. Drive, with volunteers waving signs and calling out to passing motorists. One table held voter information, including registration forms; another was for books about black history, social matters and more.

Frankie Gist, a community organizer, said that protest marches and events had been going well so far to raise awareness of issues affecting the black community in the wake of the death of George Floyd and other recent events.

Everyone has kept the momentum going at protest marches, Gist said, “but we can’t allow this to be the only time we come together. We have to do more than protesting. I believe in the power of protesting, but we need to do more to benefit the community, so we can help make a change in our community and our world.”

And he felt increasing awareness of the importance of voting could help, inspired in part by the fact that, although he had been an activist since the death of Trayvon Martin in 2012, Gist himself — who is 24 — had never registered to vote until now.

“This made me realize, my vote does matter,” he said.

The Friday shooting of a black man in Atlanta by a police officer “shows that we cannot stop keeping the momentum up,” Gist said. “If you want change, you need to vote and help out. ... People need to let their voice be heard that way.”

Arnita Miles, another local activist, was one of several volunteers at the roadside, calling out “Register to vote here! Your vote matters!” She wore a custom-made mask with the message “#Vote,” and other volunteers also wore masks and practiced social distancing.

In the end, they signed up a dozen people at Sunday’s event, and plan to carry the mission forward to help people register at other events.

As the two-hour event drew to a close, another group — a rally of cars decorated with signs decrying racism, organized by the group No Punching Bag, drove past, honking their horns in support.

Camry Wilborn, a volunteer, held a sign staying “Stop Hurting Us.” She donated books from her collection for the table of books that were being given out, and said she was collecting donations from others to keep the table going at future events.

“I decided the best way I could make an impact was to provide some books for folks,” she said. “We’ve been seeing a lot of articles about readings people can be doing outside of the protesting, and so I wanted to contribute my collection of books to folks. They’re free to black people; people of color I’m asking that they donate to one local black-led organization; and then for white allies I’m asking that they donate to two organizations to receive a book.”

After the registration event, some of the volunteers from the registration drive, including Miles, Gist, his 2-year-old son John, and others went to the recently-painted mural on the street in front of city hall. There, they lay on the concrete for 8 minutes and 46 seconds in memory of Floyd while a crowd of spectators looked on and joined in chants led by Gist. After the time was up, they got up and Gist said a prayer for God’s protection for everyone.

Judge: Man who sued Novant for reverse discrimination should get $3.8 million, not $10 million

A federal judge in Charlotte ordered Thursday that a former Novant Health executive, who claimed in a lawsuit that he was fired from his job b…

MLB: Winston-Salem must make $5M in improvements to Truist Stadium

Winston-Salem is faced with the need to make $5 million in improvements to Truist Stadium, in response to facility standards issued by Major L…

Carter High and Gibson and Griffith elementary schools will have new principals.

Certain Novant Health Inc. patients are being notified that their protected health information may have improperly disclosed through a trackin…

A Winston-Salem man died Wednesday after his motorcycle collided with a vehicle at the intersection of Peters Creek Parkway and Ethel Drive, a…

Authorities seized more than 150 pounds of marijuana and products related to it, along with other illegal drugs, three fully automatic weapons…

After lawsuit, police in Winston-Salem will get training on service animal laws

As part of a settlement in a federal lawsuit against the city, Winston-Salem has adopted a policy requiring police officers to be trained on l…

The City of Winston-Salem has received a $6 million federal grant to extend its Long Branch Trail from downtown to the city’s northern section.

The 'impeachment 10' Republicans who lost their primaries

NASA rolls out new rocket in preparation for launch

NASA rolls out new rocket in preparation for launch

Frankie Gist, Arnita Miles and other volunteers lay on the ground for 8 minutes, 46 seconds in memory of George Floyd.

Frankie Gist fills out a form at a registration rally held Sunday in Winston-Salem. “I believe in the power of protesting, but we need to do more to benefit the community, so we can help make a change in our community and our world.”