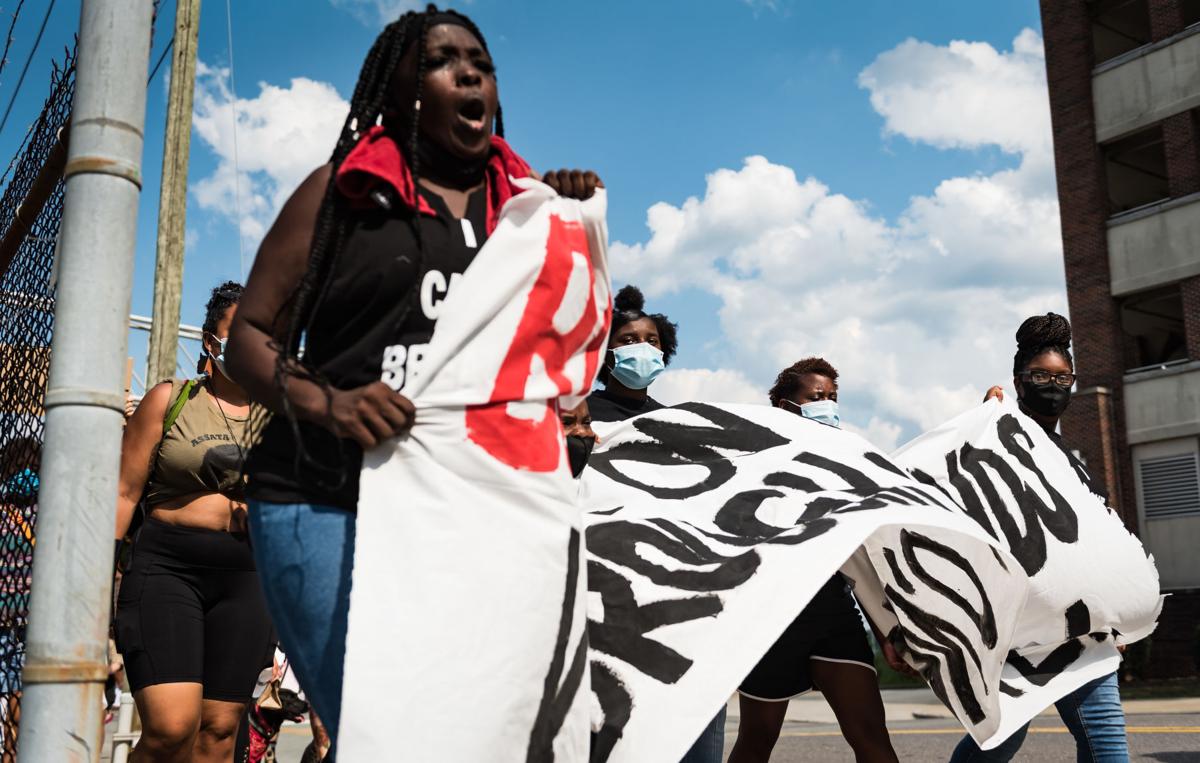 Sara Hines and fellow demonstrators march toward the Forsyth County Detention Center during Occupy the Block on Wednesday in downtown Winston-Salem. 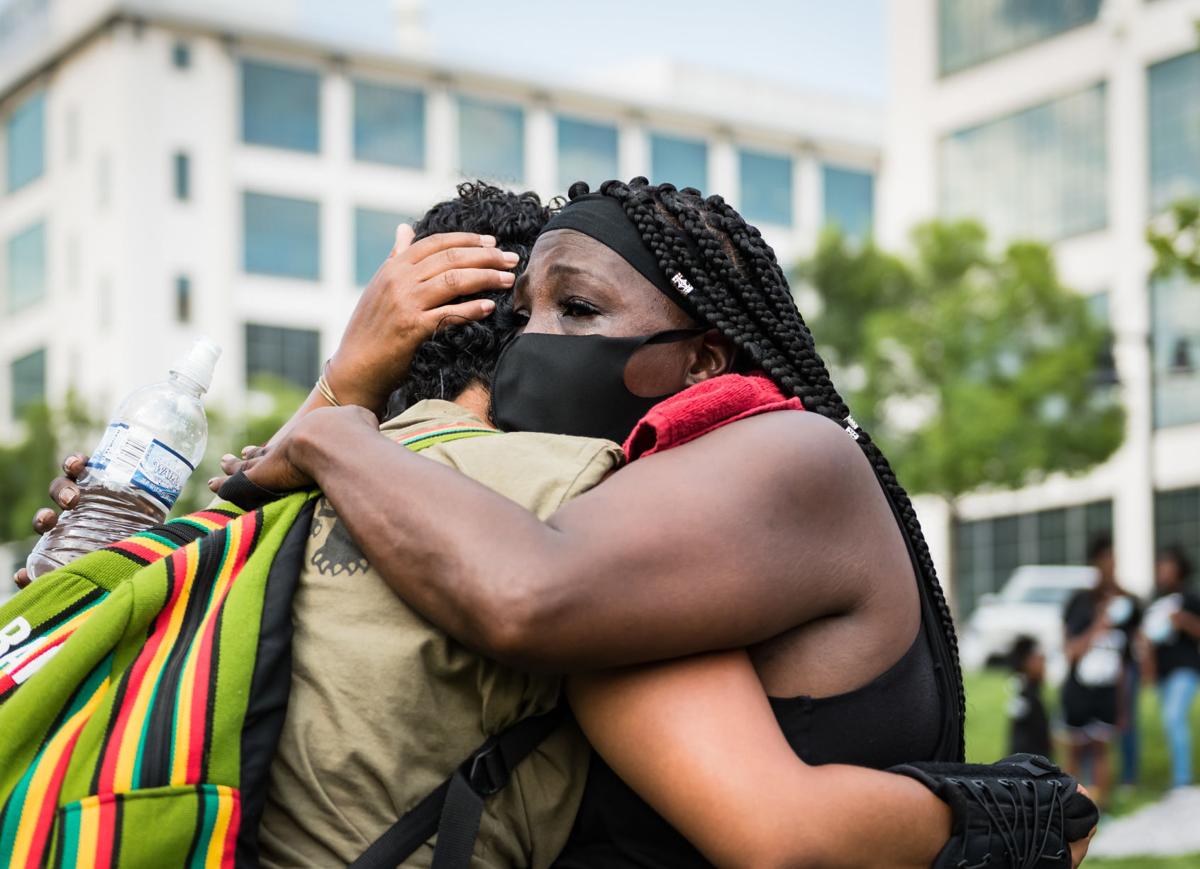 Brittany Battle (left) is embraced by Sara Hines on Wednesday as Battle is overcome with emotion after returning to Bailey Park from a march during Occupy the Block in downtown Winston-Salem. 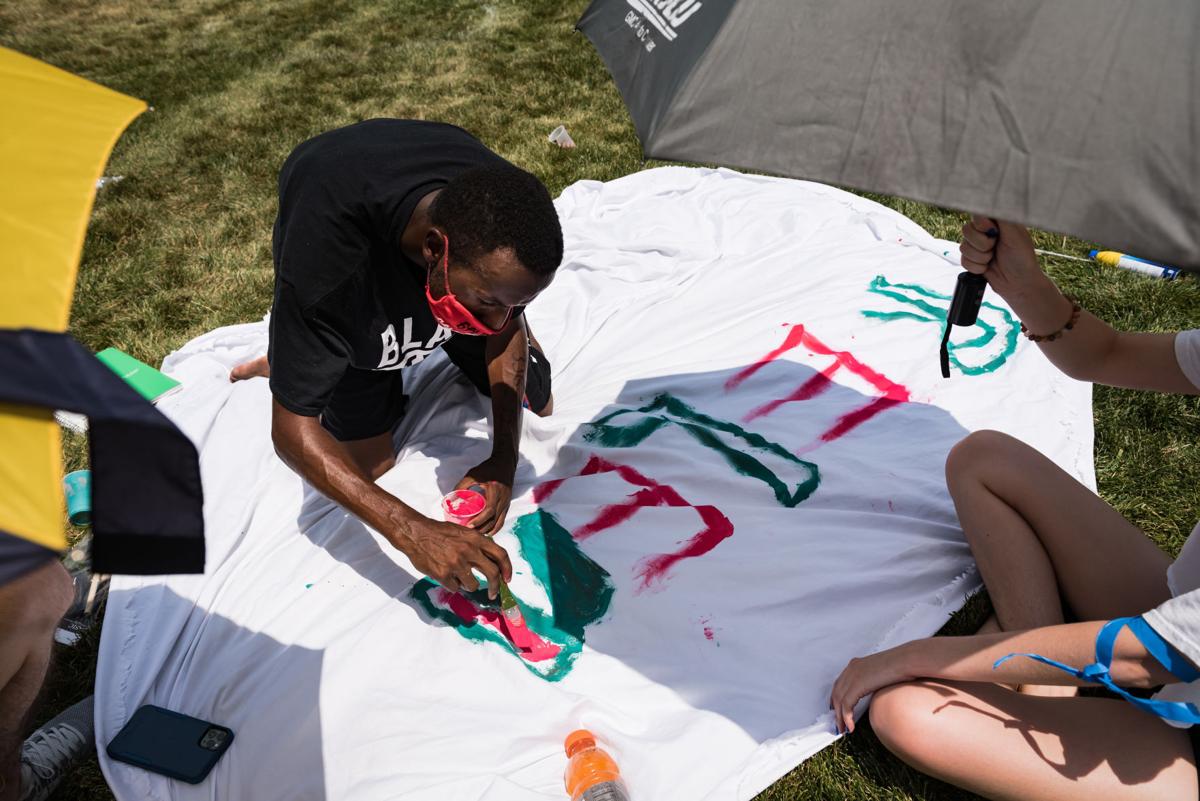 Sam Shafer (left) and Brianna Shafer (right) hold umbrellas for shade while Richard Crawford paints “Release Them Now” during Occupy the Block in Bailey Park on Wednesday in downtown Winston-Salem. Demonstrators painted messages on sheets to make them more visible to inmates when they marched past the Forsyth County Detention Center.

The message was clear Wednesday as more than 40 protesters marched to the front of the Forsyth County Sheriff's Office with five people holding a banner saying, "Blood Is On Your Hands Kimbrough & O'Neill."

Photos: Occupy the Block in Winston-Salem

By Wednesday night, the group had grown to more than 50 people and gathered in Bailey Park, facing the Forsyth County Jail.

The demonstrators accused Forsyth County Sheriff Bobby Kimbrough and Forsyth County District Attorney Jim O'Neill of covering up the death of John Elliott Neville, a 56-year-old Greensboro man who died two days after he had a seizure at the Forsyth County Jail in December 2019. The sheriff's office publicly acknowledged Neville's death only on June 26, prompted by questions from the Winston-Salem Journal. Five former detention officers and a nurse have been charged with involuntary manslaughter.

"Ultimately, why are you, Sheriff Bobby Kimbrough and DA Jim O'Neill, covering up a murder? We want to know. We need answers," Brittany Battle, one of the protest organizers, said outside the sheriff's office Wednesday afternoon. "And we're going to be out here every day until we get those answers....But we have to make sure that the same way that the world has been protesting in honor and to demand justice for George Floyd and Breonna Taylor, we have to make sure we are getting justice and answers for our fallen brothers, sisters and siblings who were murdered right here in this detention center."

Battle was referencing the case of two Black people who were killed by police officers — Taylor in March when police officers shot her during conducting a no-knock warrant on her house in Louisville, Ky. and Floyd, who died after a Minneapolis police officer knelt on Floyd's neck for nearly nine minutes.

Both cases have sparked protests around the country over the issue of racial injustice and police brutality. Locally, protests have erupted over Neville's death.

Kimbrough could not be reached for comment Wednesday, but O'Neill sent a statement.

"(Six) people were charged in Mr. Neville's death, even before the autopsy was made public," he said. "The family attorney of John Neville has publicly asked that the community act respectfully in honoring Mr. Neville's name and memory. These people are instead protesting for the sake of protesting. It's unfortunate that they are not following the wishes of the Neville family."

Neville died of a brain injury in the hospital that came about after his heart stopped beating. He asphyxiated while being restrained with his arms behind his back and his legs folded up in a controversial hog-tie position. He spent minutes in this position and cried out for his mother and repeatedly said he couldn't breathe, according to an autopsy report.

On July 8, O'Neill announced that five former detention officers and a nurse had been charged with involuntary manslaughter — Lt. Lavette Maria Williams, 47; Cpl. Edward Joseph Roussel, 50; Officer Christopher Bryan Stamper, 42; Officer Antonio Woodley Jr., 26; Officer Sarah Elizabeth Poole, 36; and nurse Michelle Heughins, 44. As of Wednesday, Heughins was the only one who had not been served with the arrest warrant. SBI Agent in Charge Scott Williams said earlier this week that he had been in contact with Heughins' attorney and that Heughins, who lives out of the state, would be turning herself in either Tuesday or Wednesday. It was not immediately clear why she still had not been served with the warrant as of Wednesday.

Video of the incident has not been released publicly, and O'Neill has said that he would oppose such release. The News & Observer, which has covered the Neville case, has petitioned for its public release, and a hearing on that petition is scheduled for July 29 in Forsyth Superior Court.

The event on Wednesday was described as an all-day occupy event. Protesters gathered at the corner of Patterson Avenue and Fourth Street near Bailey Park. Organizers included the Triad Abolition Project, the Unity Coalition, Greensboro Rising, Housing Justice Now and others.

The demonstrators had a number of questions that they wanted answers to, which included whether the sheriff's office had instituted any policy changes since Neville's death. They also wanted to know more information about the process that led to Neville's bond being unsecured after he was taken to Wake Forest Baptist Medical Center, where he later died.

According to a court document, Guilford County Assistant District Attorney Randi Spiker requested that Neville's $2,000 secured bond be unsecured due to a medical emergency that required Neville to be hospitalized. A district court judge granted that request on Dec. 2.

The protesters have previously criticized the Winston-Salem Police Department for how it handled the arrests of 20 people between July 8 and July 9. The protesters arrested were all charged with impeding traffic for stepping into the roadway. Demonstrators have called for those charges to be dropped and accused the police department of using intimidation tactics.

Battle and other demonstrators also raised questions about the legal ethics of the law firm representing the family. Michael Grace and Chris Clifton represent the family. Battle said the law firm has also represented sheriff's deputies and other law-enforcement officers through the Police Benevolent Association. She said that's a conflict of interest.

The relationship between the firm and the officer is over once the legal representation ends, he said.

"As a lawyer and a citizen, I appreciate working with these officers in their time of need," Clifton said. "That doesn't mean I can't help the Neville family with their issues."

"There is blood crying out from the ground for justice and we cannot be silent," she said.

Protesters demand answers in the death of John Neville.

Sara Hines and fellow demonstrators march toward the Forsyth County Detention Center during Occupy the Block on Wednesday in downtown Winston-Salem.

Brittany Battle (left) is embraced by Sara Hines on Wednesday as Battle is overcome with emotion after returning to Bailey Park from a march during Occupy the Block in downtown Winston-Salem.

Sam Shafer (left) and Brianna Shafer (right) hold umbrellas for shade while Richard Crawford paints “Release Them Now” during Occupy the Block in Bailey Park on Wednesday in downtown Winston-Salem. Demonstrators painted messages on sheets to make them more visible to inmates when they marched past the Forsyth County Detention Center.