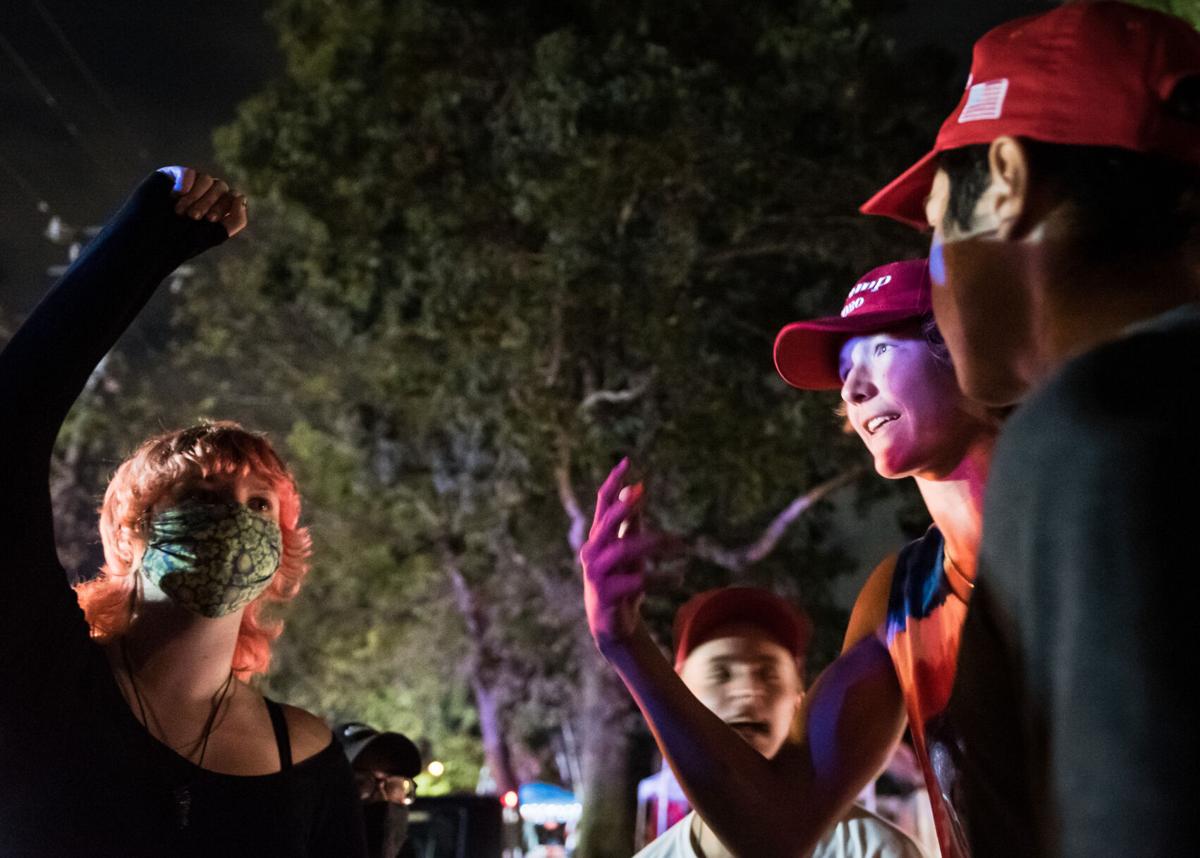 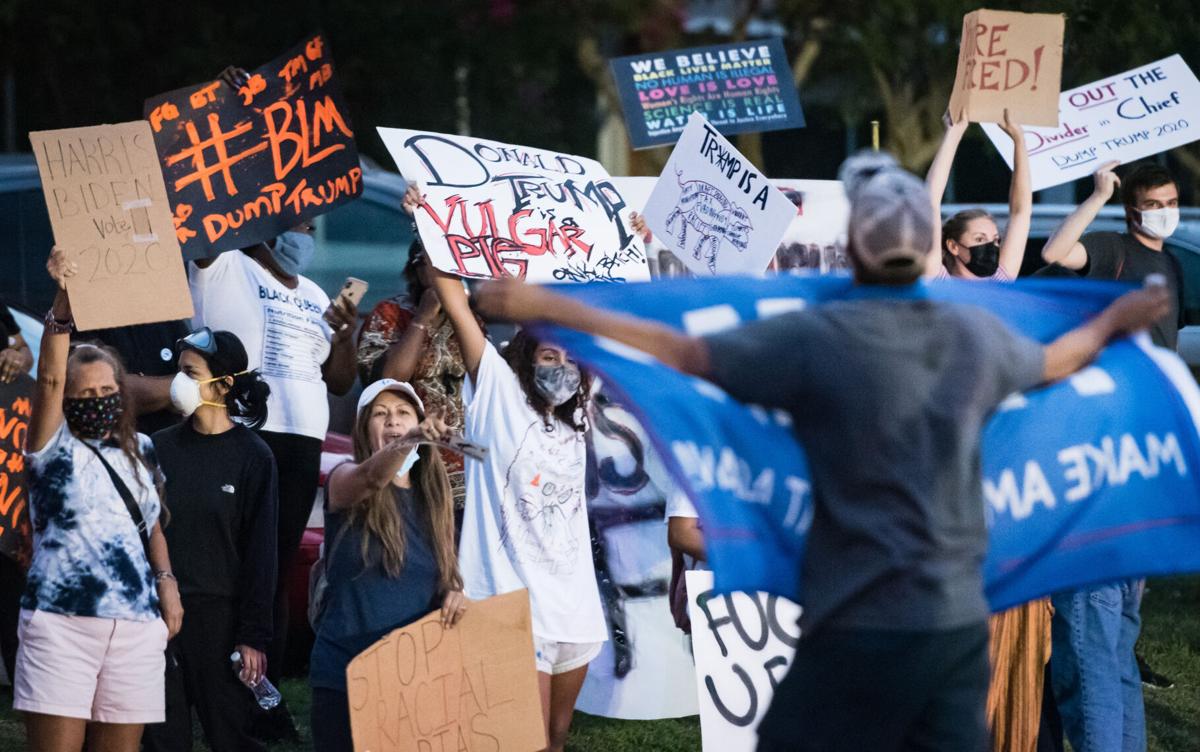 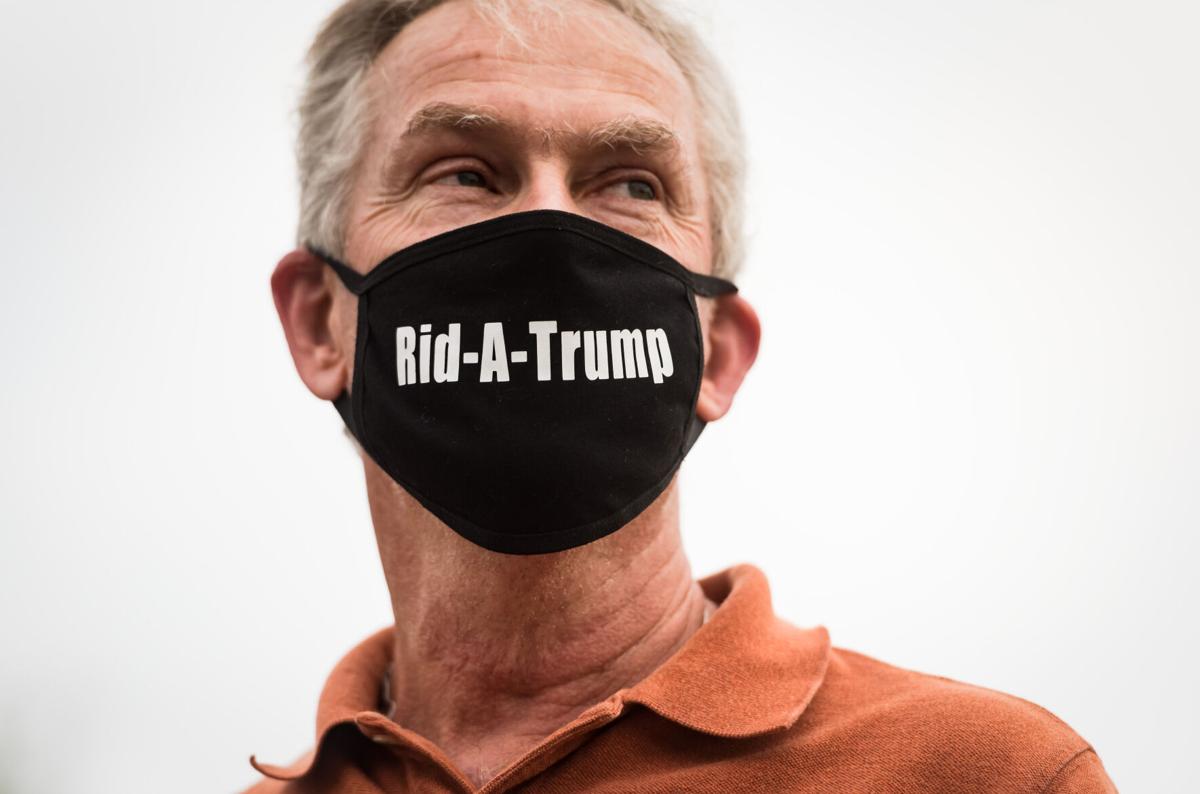 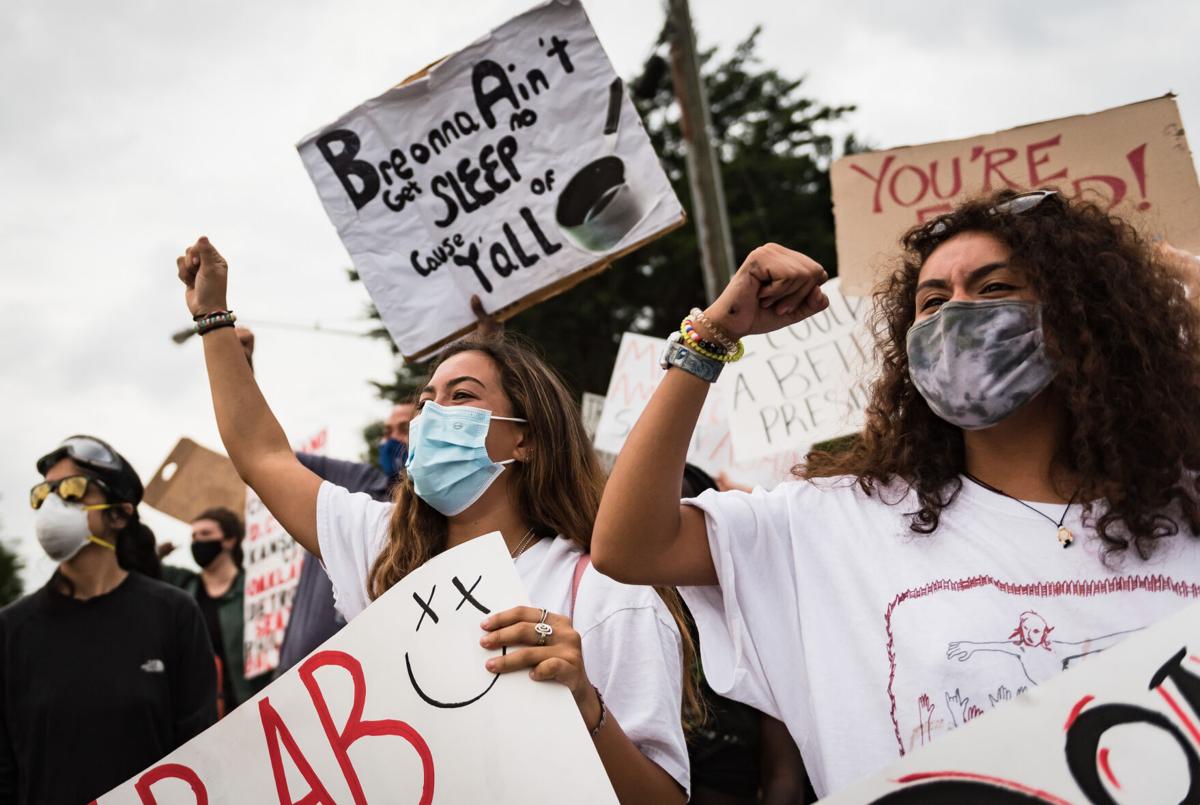 About 60 protesters loudly voiced their opposition when President Donald Trump spoke Tuesday night on the tarmac at Smith Reynolds Airport. And the protesters traded barbs and insults with Trump supporters outside the airport.

After Trump finished speaking around 8:10 p.m., throngs of his supporters walked from the campaign's venue to the airport's exit at Norfleet Drive and North Liberty Street.

As the Trump enthusiasts crossed Liberty Street, the anti-Trump protesters yelled at them, calling them "liars, and "losers," and chanting "No Trump, no KKK — no fascist USA." Some Trump supporters responded by saying, "Trump 2020, let's go," "Four more years," and "U.S.A."

Eight Winston-Salem police officers stood in Liberty Street and on both sides of the street, directing traffic and separating the two sides. Although both groups yelled and screamed at each other, sometimes face to face, there was no violence.

A man yelled "Build the Wall" at the protesters as he walked in the right lane of North Liberty Street. Two officers yelled at the man to get on the sidewalk. The man eventually complied with the officers' commands.

An officer had earlier yelled at the protesters and Trump supporters to stay on the sidewalks along North Liberty Street.

A woman wearing a Trump T-shirt said to her friend, "I'm going to get a video to see what ignorance looks like." A protester then yelled at her and other Trump supporters "to go back to your trailers."

A video screen in the airport's lower parking lot showed Trump speaking to the crowd on a tarmac. When they heard Trump speak, the protesters loudly yelled, "You're fired," "Dump Donald Trump," "Not my president," "Lock him up," and "Black Lives Matter."

A man carrying a U.S. flag said that "All lives matter," as he crossed Liberty Street. A protester responded, "They don't love you bro."

A tense moment happened just after 7 p.m. when protesters confronted a man and woman across the street from the airport's entrance. The man, who said he supports Trump, and the protesters exchanged angry words and taunts.

The protesters demanded that the man and woman put on masks. The man then accused at least one protester of spitting on him during their confrontation.

Percell Newman of Winston-Salem watched the protesters from across Liberty Street near the airport's entrance.

"I think they are ignorant," Newman said of the protesters. "They are being rude to the people who are just crossing the street. They (the protesters) can just go home."

However, Jamaal Oti of Winston-Salem said that the anti-Trump protesters were expressing their First Amendment rights. The protesters are bringing awareness to the issues that some people may not know about, especially in the black community, Oti said.

A group of protesters drove to 4300 block of Old Walkertown Road, walked to the airport's entrance and joined other demonstrators who had already been standing at the site.

Many of the same protesters had earlier attended a rally called, "Ain't Happening Here: Community over Regime."

That event was held at Fairview Park, about two miles from the airport. The organization, Building WSNC, staged what it described as a civil, peaceful demonstration at the park.

Building Winston-Salem is a group of community activists whose mission is to overturn structures that do not serve everyone equitably, the statement said. The organization is a coalition of 17 local groups, including the Triad Abolition Project and Black Lives Matter-Winston-Salem.

"On behalf of the constituents of Winston-Salem and Forsyth County, N.C., we would like to express our shared disappointment in the empty words, regressive actions, and harmful inactions of our elected officials," Sattler said, quoting the letter.

"In a time where our community is healing from the neglect and distrust, it was your duty to protect your citizens from the irresponsible rhetoric spewed by the president," Sattler said. "Yet, you have once again chosen to be silent and neglect the community that elected you.

"Winston-Salem is no stranger to silence from our leaders," Sattler said.

Benjamin Spencer, who lives near Pfafftown, criticized Trump at the Fairview Park rally.

"We have a fascist as president," Spencer said. "He's in a city where he shouldn't be in. He doesn't act like a real American."