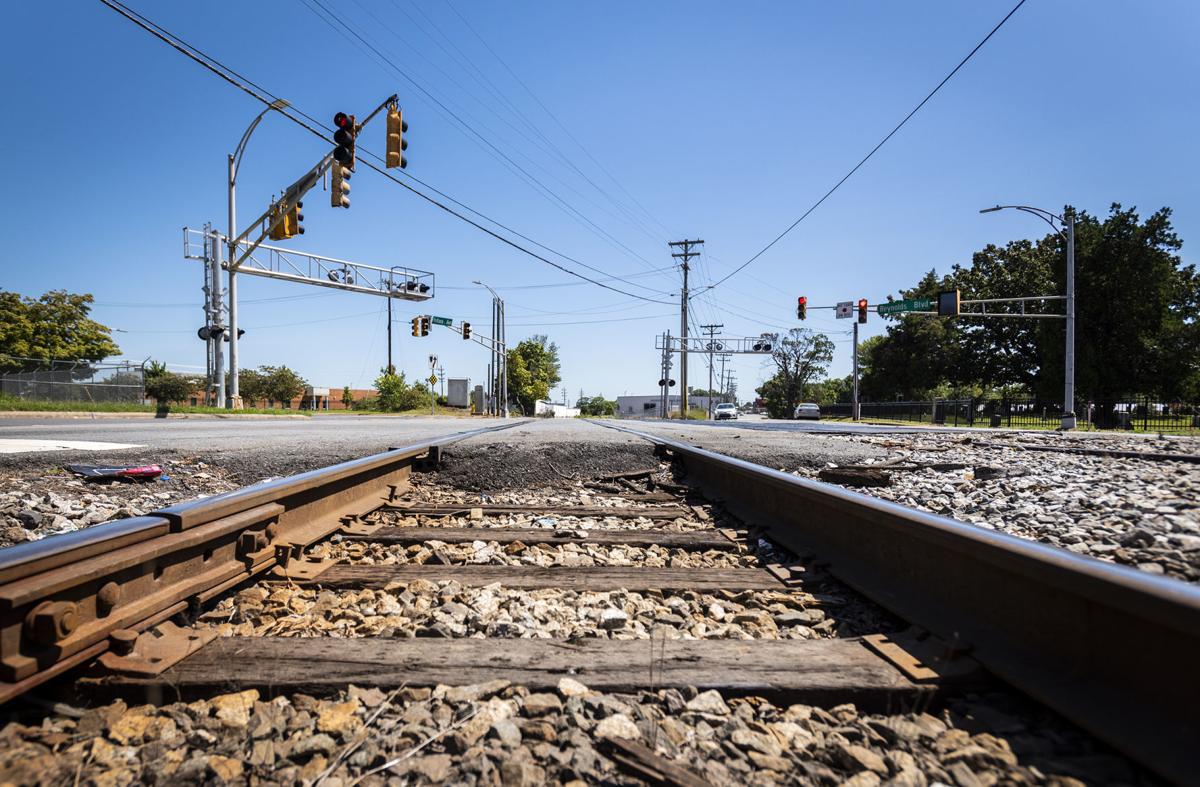 The railroad crossing at Reynolds Boulevard and Indiana Avenue in Winston-Salem. 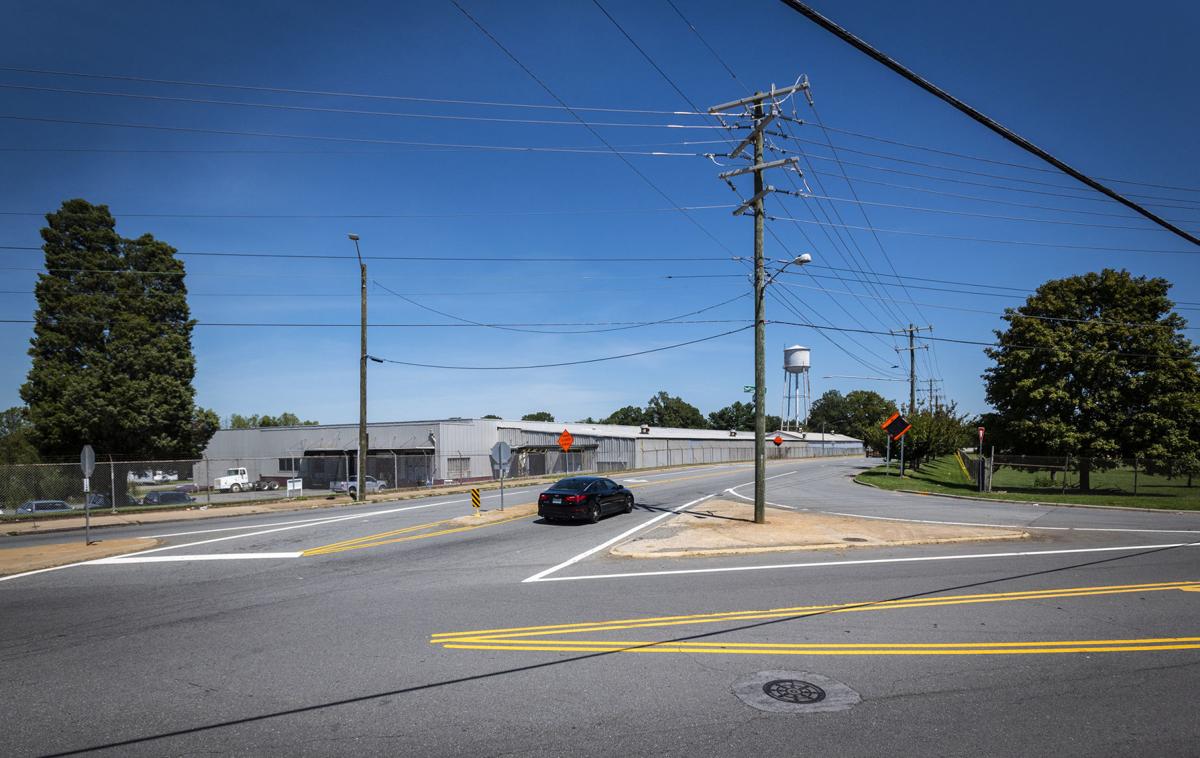 The intersection of Akron Drive and Indiana Avenue in Winston-Salem. 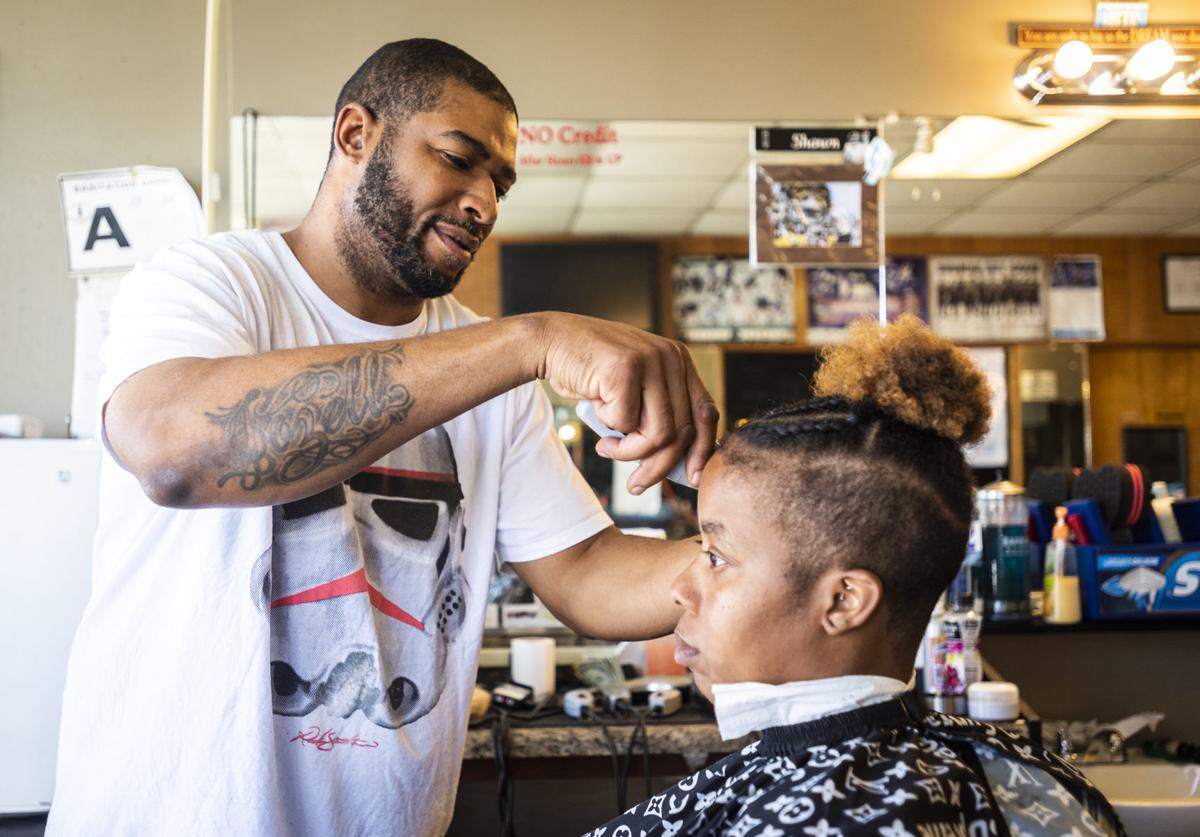 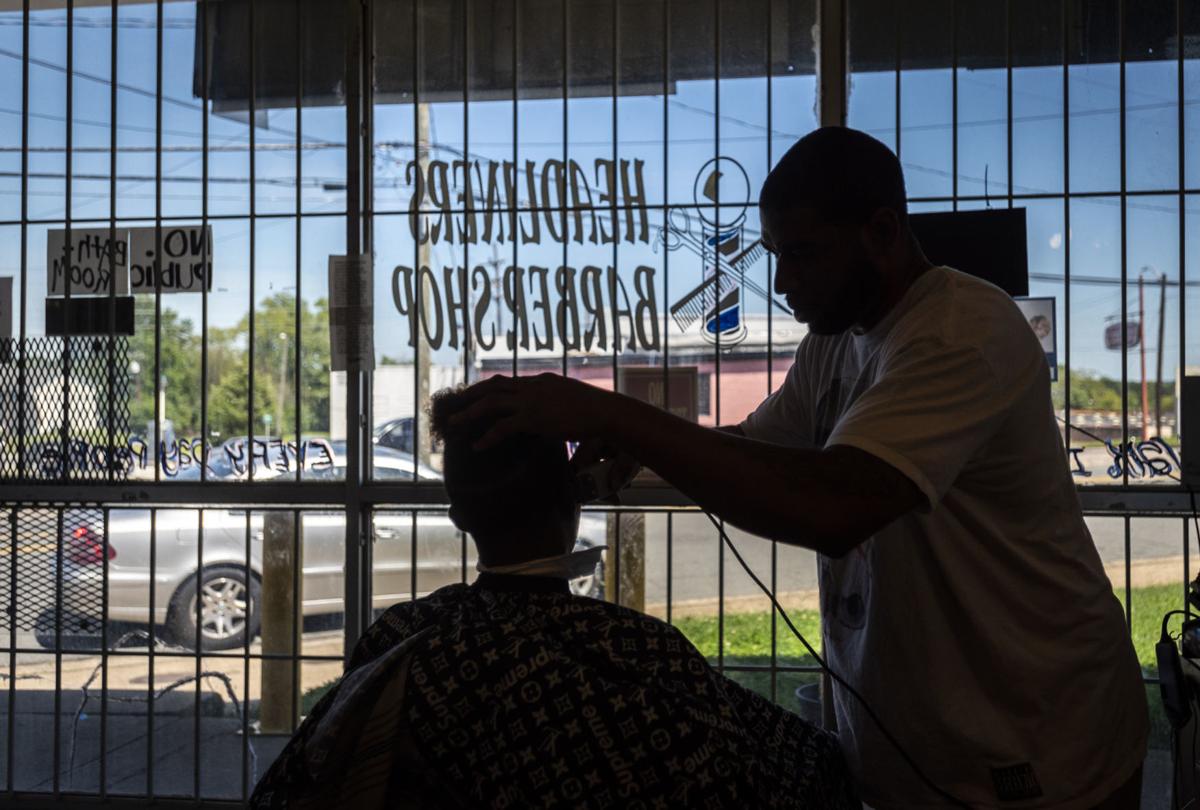 Shawn Staley, owner of Headliners Barber Shop on Indiana Avenue, cuts Mercedes Lyons’ hair in his shop in Winston-Salem on Friday. Staley is concerned that a proposal to split Indiana into two sections could hurt his business. 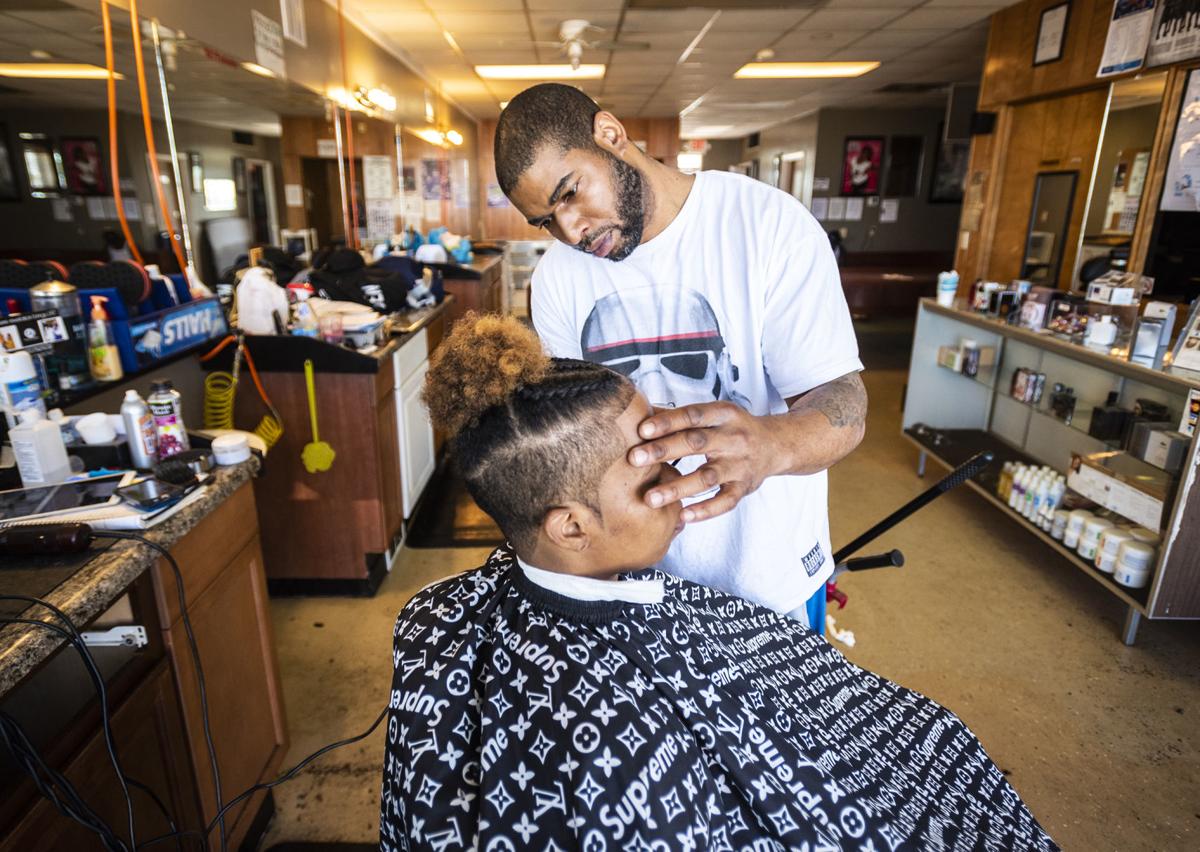 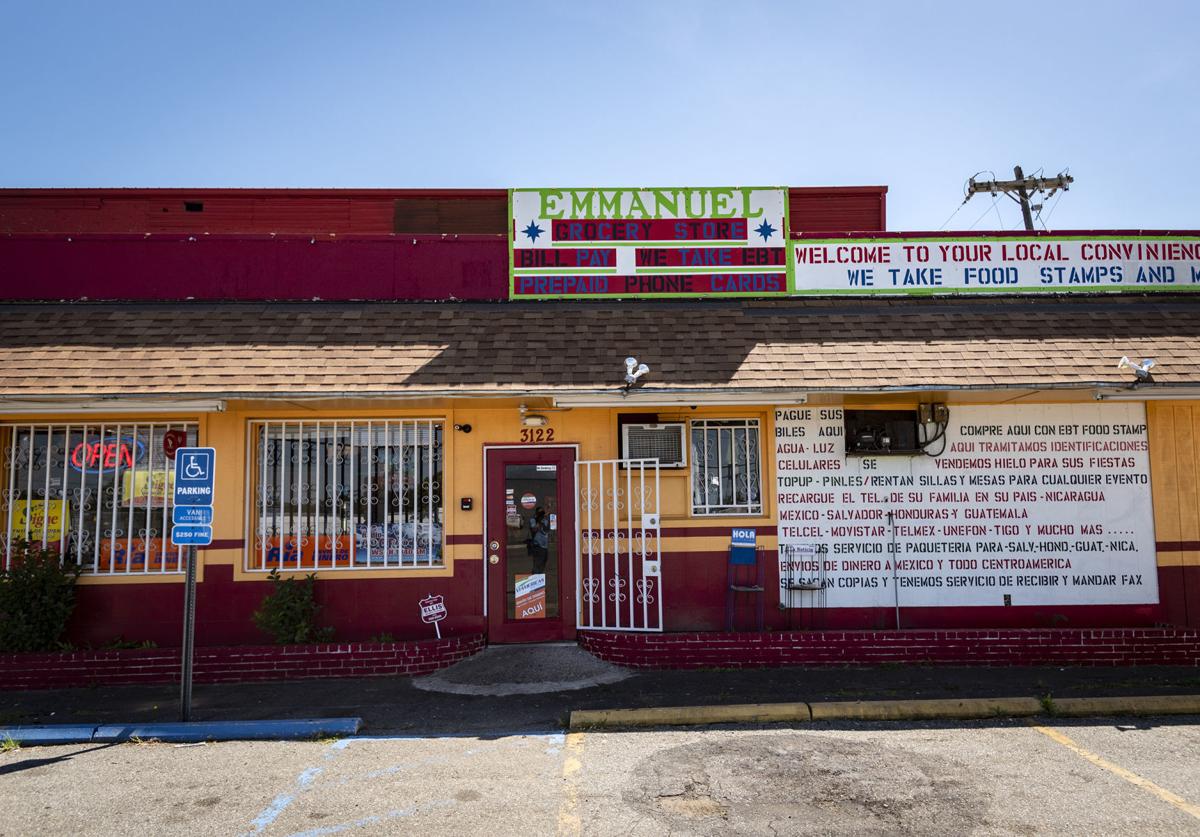 Tienda Emanuel off of Indiana Avenue in Winston-Salem

The railroad crossing at Reynolds Boulevard and Indiana Avenue in Winston-Salem.

The intersection of Akron Drive and Indiana Avenue in Winston-Salem.

Shawn Staley, owner of Headliners Barber Shop on Indiana Avenue, cuts Mercedes Lyons’ hair in his shop in Winston-Salem on Friday. Staley is concerned that a proposal to split Indiana into two sections could hurt his business.

Tienda Emanuel off of Indiana Avenue in Winston-Salem

Two major roads in northeastern Winston-Salem, Indiana Avenue and Reynolds Boulevard, could be sliced into separate sections by a plan to give better access to the high-profile Whitaker Park redevelopment, officials say.

The plan involves extending Akron Drive to the west so that it crosses a Norfolk Southern railroad track and connects to Shorefair Drive at Reynolds Boulevard. The new road would pass through Whitaker Park and open land for development and jobs.

A traffic study is recommending the closure of a rail crossing just south of the proposed road, at the junction of Indiana Avenue and Reynolds Boulevard. The railroad won't allow the new Akron crossing without closing another one, officials say.

The traffic study was commissioned by the Whitaker Park Development Authority (WPDA), which is trying to turn the former R.J. Reynolds Tobacco factory at Whitaker Park into a centerpiece for hoped-for new jobs and businesses.

The WPDA is in the process of building the first phase of the Akron extension in order to improve access  to the business park. That section, which doesn't cross the railroad, should be finished this fall.

It's a future phase of the project that would cross the railroad, and has some people worried about the effect of slicing Indiana Avenue, a major north-south connecting route, into separate sections.

Some drivers could bypass the closed-off section using parts of Patterson Avenue and Perimeter Point Boulevard to the north, the John Davenport Engineering traffic study suggests.

In addition, the study proposes changing the alignment of Dominion Street where it currently curves and joins Reynolds Boulevard in a T-intersection south of Akron Drive. The plan calls for eliminating the curve in Dominion so that it connects directly to the northern part of Reynolds Boulevard.

Drivers on the resulting through-street would then be able to bypass the closed section of Indiana Avenue.

Nick Liguori, a project manager with Davenport who worked on the study, said the existing alignment of streets and railroad is a difficult one: The railroad crosses at an angle through the intersection of Reynolds and Indiana.

"It is an intersection that has some challenges in terms of the geometry of the intersection and the angle of the approaches," he said. "It is not an ideal intersection."

By contrast, he said, the rail crossing on the new Akron Drive extension would be straightforward.

But the owners of some small businesses say it would hurt them to suddenly be on a section of Indiana Avenue that doesn't really lead anywhere.

"A lot of people find this business by taking this street," said Shawn Staley, the owner of the Headliners barbershop on Indiana. "There are a lot of people who say they didn't know there was a barbershop here."

Not all his customers are folks who just happened to see his shop, he said, but he doesn't want to lose any chances to get customers, either. Staley's shop is south of the rail crossing at Indiana Avenue and Reynolds Boulevard that is recommended for closure.

Staley worries that cutting off his section of Indiana could also lead to more crime.

"It is not just about the businesses," he said. " It is about the health of the neighborhood."

Alith Vergara illustrated the effect she thinks cutting off Indiana would have on her business by by making a cutting motion across her throat with her finger.

Vergara runs Emmanuel Grocery Store, a business that she's operated for 16 years. She said that cutting off Indiana would leave her store isolated.

"It is no benefit to me," Vergara said. Her store is also south of the intersection that would be closed.

City leaders want to see Whitaker Park develop and bring jobs, but they're also aware of the importance Indiana Avenue has for traffic circulation.

"We have got to consider the citizens that live in that community, the ones of us who go down Indiana every day and who come up to Reynolds Boulevard," said North Ward Council Member D.D. Adams. The roadwork would be in her ward.

The tobacco company donated most of its Whitaker Park campus in 2015 to the Whitaker Park Development Authority, which was formed by Winston-Salem Business Inc., the Winston-Salem Alliance and Wake Forest University. The site has been billed as 120 acres of prime commercial land.

Early on, the Whitaker Park group saw the desirability of extending Akron Drive west through the site and intersecting Reynolds Boulevard at Shorefair Drive.

The first phase of that project is under construction now: Bob Leak, president of Winston-Salem Business Inc., said late fall should see the completion of the road from Shorefair to a cul-de-sac just west of the Norfolk-Southern railroad track.

The second phase would complete the connection to Akron by crossing the railroad.

Nothing will happen, though, until the public has had a chance to provide feedback to the city, said Damon Dequenne, assistant city manager.

"Once the plans have been developed, we need to get public input," Dequenne said. City staff would also give their input. Whatever emerges from this process would go to the Public Works Committee of the Winston-Salem City Council, followed by a decision by the full council after that.

"In the short term, I would imagine we would be scheduling public meetings within the next six months," Dequenne said, adding that a year to finally reach a decision would be a "fair estimate" of the time required.

Most of the money for the project is in place: The city is getting  $1.3 million from the state, contributing another $1.25 million and using $1 million previously allocated for improvements at the business park but unspent.

Even so, Adams said the project would not be built "until the citizens are satisfied on how the logistics will be" — a reference to the rail-crossing closure or any other arrangement devised to solve the road-connection quandary.

One idea that's been looked at, and rejected, is using a bridge on Akron to cross the rail line. Such a project would end up taking too much land away from the business park the project is meant to help.

"This is a very complicated issue," East Ward Council Member Annette Scippio said when the road came up in committee. "It is not just the residents. That Indiana corridor is a great pass-through to everybody, particularly on the east side. Reynolds Boulevard is very important. We have a lot of pieces to put together before we can resolve this."

"The development of Whitaker Park is a very hot subject right now for economic development and recruitment," he said. "We need to keep moving on it."

"Our goal is to make it as efficient as it is today, or improved," he said. "We are casting a broad net to make sure we are doing this right."