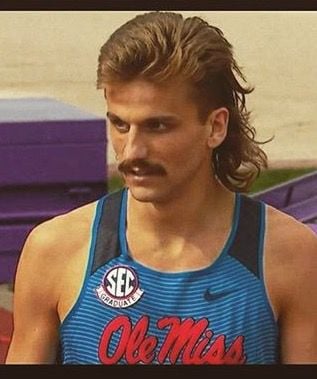 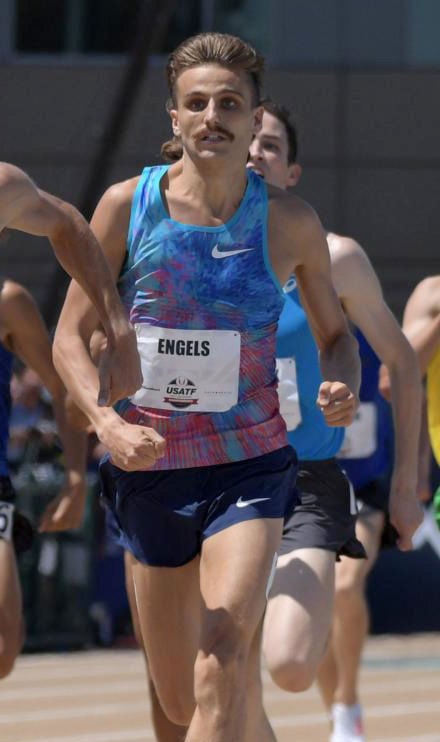 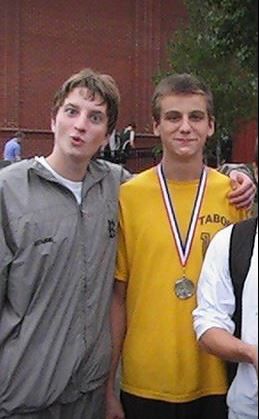 Nicholas “Doobie” Doub (left) and Craig Engels after racing together at Reagan High School in 2010. 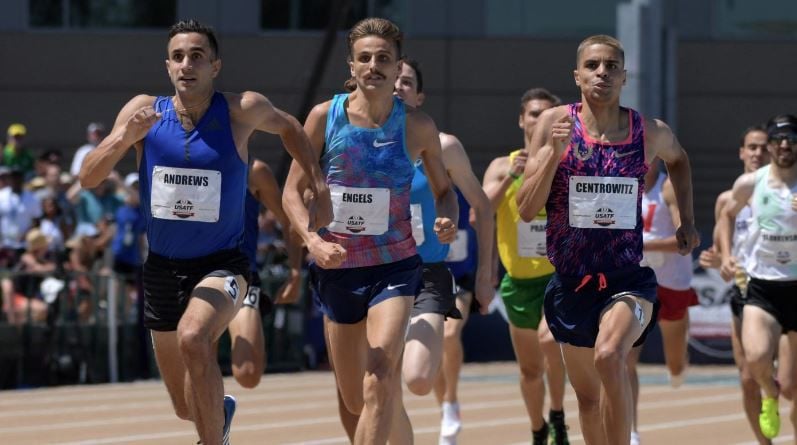 Craig Engels (center) races defending Olympic gold medalist Matt Centrowitz (right) and Robby Andrews (left) at the 2017 USA Track Championships in June. Engels is known for his mullet haircut and moustache, and he plans to shave it all off to honor a former teammate.

The three M’s — mullet, mustache and medals — might appear to sum up Craig Engels at first glance.

But that’s just scratching the surface of the Pfafftown native who has become a rising mid-distance star in the track world.

“For some reason, the hair has given me a lot of notoriety,” said Engels, whose hair has garnered ESPN and Runner’s World’s attention. “It’s fun to stand out and be different, but I think the time has come to cut it off.”

As Engels, 23, returns to his home state this week, he’ll be looking to shave off more than just seconds as he tackles the Sir Walter Miler in Raleigh today. The Reagan High School alum will also shave off his mustache-mullet combo to honor a former teammate.

Nicholas “Doobie” Doub, who ran with Engels in high school, died in 2011 after his car hit an icy patch and skidded off the road.

Engels has already raised more than $1,500 and hopes to double that to bolster a scholarship in Doub’s name that is given to a Reagan student who embodies his spirit.

“This is an opportunity to add to that scholarship that will one day in the future become a statewide, if not countrywide gift, so that all may hope to catch a glimpse of what an amazing soul Nick was and still is,” Engels wrote on the fundraising page.

Doub, who would’ve celebrated his 24th birthday last week, has been a longtime inspiration to Engels. The fundraiser is a chance for Engels to give back.

“He was such a different kid, he was his own person and I really, really liked that,” Engels said. “It’s so easy to take things for granted or to complain on a tough day, but then I think about Doobie, who was always so positive, and I think ‘I want to be more like him.’”

A lot has changed since Engels days at Reagan.

His distinctive hair has drawn eyes, well, that and the athletic prowess that nearly sent him to the 2016 Summer Olympic Games in two events.

In last summer’s Olympic trials, Engels placed fourth in the 800-meter and fifth in the 1,500-meter finals and was the field’s youngest competitor.

“I always knew Craig had a fantastic talent,” said Chris Catton, former Reagan track and field coach. “Success isn’t linear — nothing is promised to anyone — but I think Craig certainly has the ability and the mindset to succeed.”

In late June, Engels signed a professional contract to join the Nike Oregon Project — a training program for professional runners.

Engels will train with some of the best in the sport, including Olympic medalists Matt Centrowitz, Galen Rupp and Mo Farah.

“For people who don’t know running, it’s like the Yankees. It’s the biggest deal,” said Engels, who logs about 70 miles a week. “I’m so pumped.”

Engels ran at N.C. State on a scholarship but almost quit running after being sidelined by a series of hip injuries.

Catton urged him to give it one more shot and Engels transferred to Ole Miss, where he excelled.

“He had a rough go, so it was really his last chance, now or never,” said Catton, an avid runner who keeps in touch with Engels regularly. “He really committed himself to the sport. He has a lot of potential.”

Engels recently placed fourth in the 1500-meter in the U.S. Outdoor Track and Field Championships, edged out by Olympic gold medalist Matt Centrowitz and John Gregorek by two-hundredths of a second.

“Maybe without the hair,” he surmised with a laugh, noting the potential wind resistance of his long locks. “It was pretty disappointing. Two-hundredths of a second.”

But Engels has a good shot at making both the 2019 World Championships in Qatar and the 2020 Olympic Summer Games in Tokyo.

He has spent the better part of the past month training in Switzerland where the higher altitude is thought to aid training.

“My main goal is not just making it to the 2020 Olympics, but medaling as well,” he said.

In the time it takes to toast a piece of bread, Engels can have already run a mile.

With a personal best of four minutes and one second, Engels is hoping to trim a few seconds off his time today despite not having raced the mile in three years.

He should be able to clock a time well under four minutes, he said, if he can maintain his 1,500-meter pace — which takes him 3 minutes and 35 seconds at his best.

“It would be cool to hopefully hit that milestone in my home state, surrounded by family and friends,” Engels said. “My family has always supported me in everything. Except the mullet.”

Following the race, Engels will cut his mullet and mustache and live stream it on his Instagram page.

If he wins the men’s elite mile race — which kicks off at Meredith College at 9:20 p.m. — Engels has pledged to donate $1,000 of the winnings to the fund- raiser, dubbed “Chop for charity.”

“Craig was one of Nick’s best friends. They ran together and just generally shared the same outlook and love of life,” she said. “After Nick passed away, (Craig) became more serious in his running and also just with reaching out to my family.”

Engels visits the Doub house every Christmas for a “family dinner” to share stories with the family about Nick, she said, so she wasn’t surprised by Engels’ unique way of honoring her brother.

“This act of giving just to give helps to lessen the pain that losing a brother and son brings,” she said. “It’s a reminder that Nick is not forgotten and he has truly impacted the lives of many.”

Engels recalled a time in high school when Doub sprinted up behind him, huffing and puffing, so he could tell Engels a story.

“Throughout time, people are forgotten, but he’s the one stuck in my head every day,” Engels said. “He’s been a big inspiration.”

Nicholas “Doobie” Doub (left) and Craig Engels after racing together at Reagan High School in 2010.

Craig Engels (center) races defending Olympic gold medalist Matt Centrowitz (right) and Robby Andrews (left) at the 2017 USA Track Championships in June. Engels is known for his mullet haircut and moustache, and he plans to shave it all off to honor a former teammate.