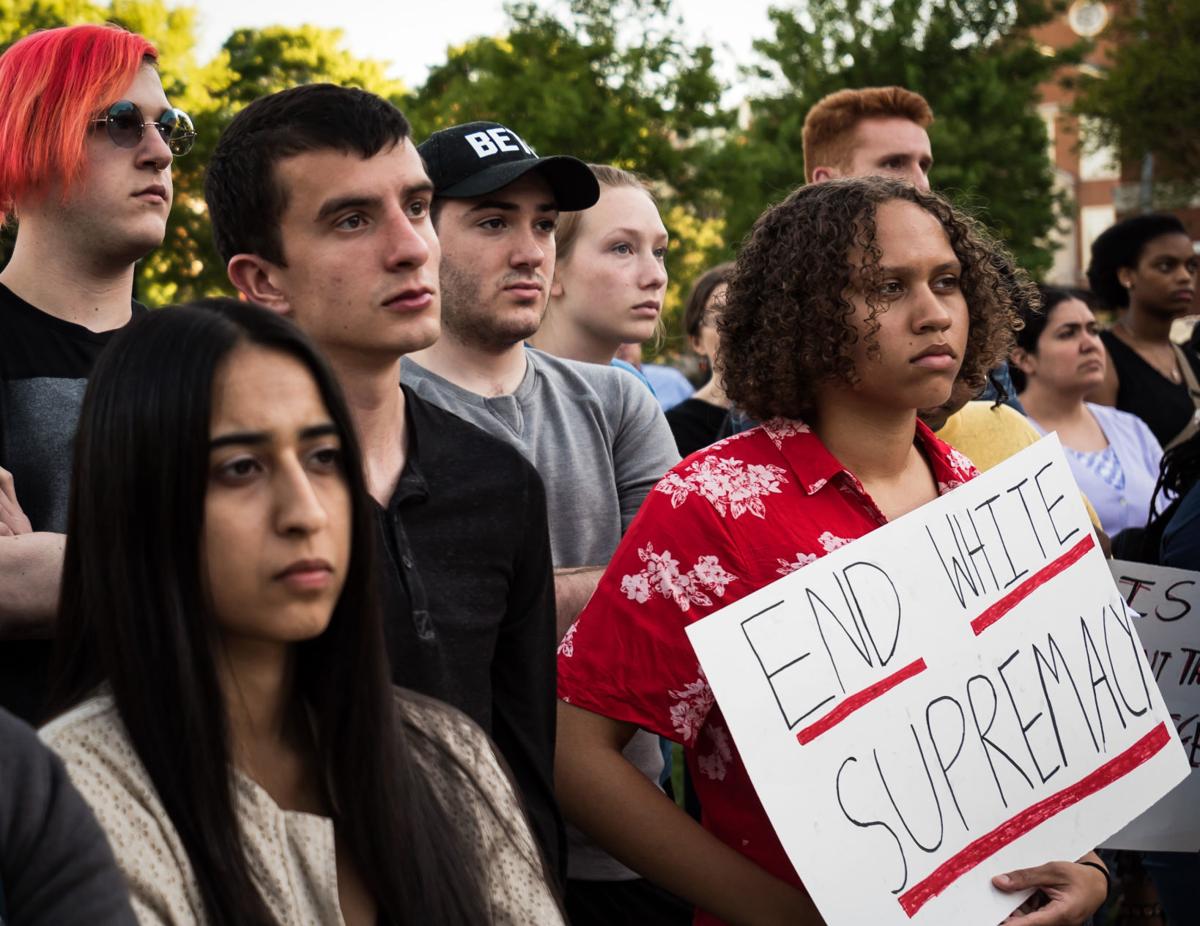 Students attend a forum held by the Wake Forest University Anti-Racism Coalition to discuss the university’s response to allegations of white supremacy on Monday evening. 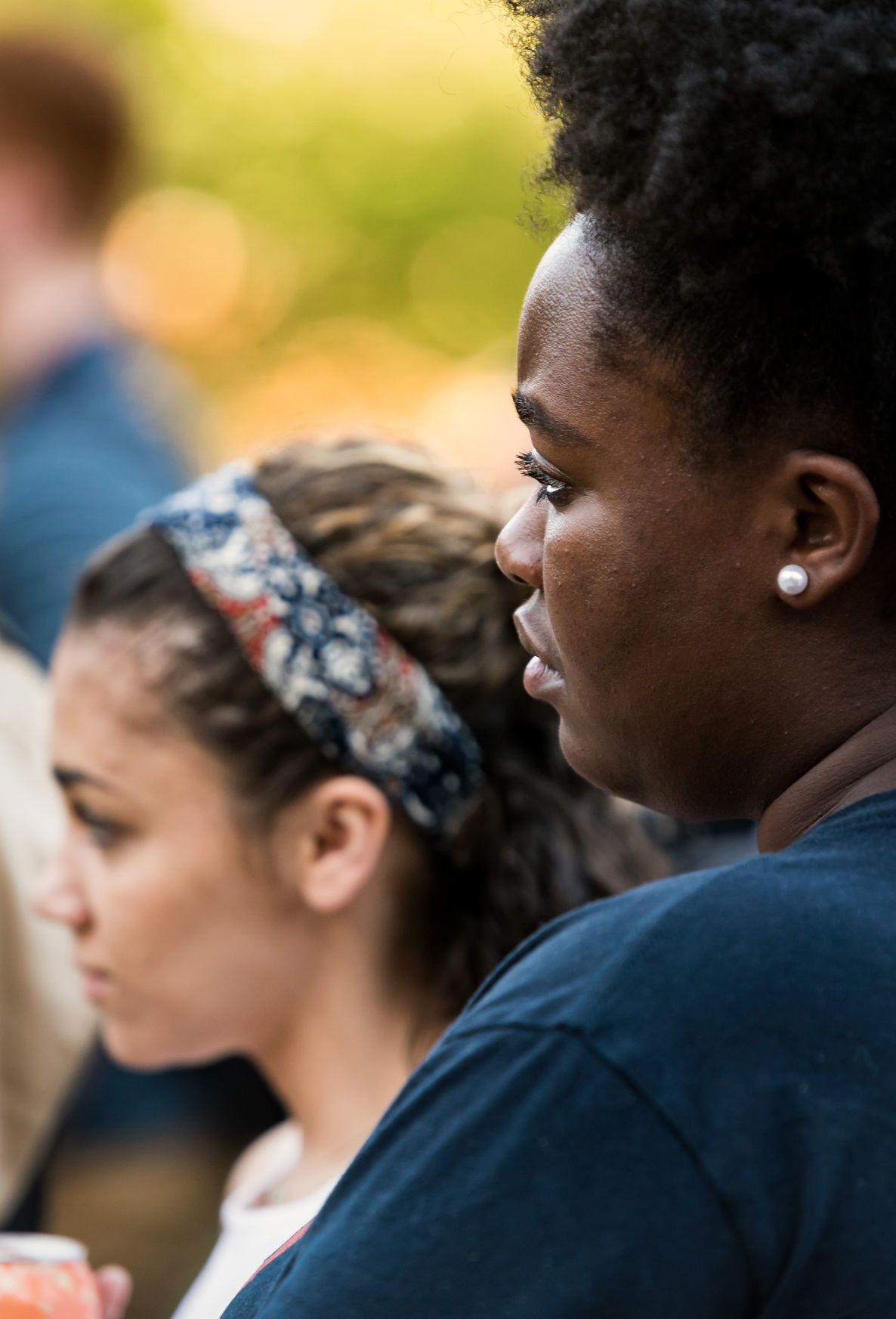 Breezy Jenkins (right) and Raven McCorkle, juniors at Wake Forest University, listen to a speaker during a forum held by the WFU Anti-Racism Coalition.

A coalition of students, faculty and staff at Wake Forest University demanded Monday that university officials immediately begin a zero-tolerance policy for white supremacy after several developments in recent months heightened concerns about racism on campus.

Wake Forest inflicts trauma on its students of color, said Aries Powell, a WFU student and a representative of the WFU Anti-Racism Coalition.

“We have gathered in collective resistance to Wake Forest, and the ways that this institution embodies and emboldens white supremacy,” Powell said.

Nearly 400 people gathered at the coalition’s forum at Manchester Plaza on campus. Powell said that Wake Forest leaders should condemn images in past yearbooks of students posing with Confederate flags, including a senior-year photo of Martha Allman, who is now the university’s dean of admissions. The existence of that photo became widely known earlier this year.

Powell said that WFU’s response was to hold another ineffective “dialogue on diversity, inclusion and the importance of community.” The coalition issued nine demands to the university to rectify “its legacy of racism and its continued disregard for the lived experiences of black students,” she said.

“But Wake Forest continues to dismiss the possibility of implementing a zero-tolerance policy for white supremacy,” Powell said. “By ignoring the demands of black students and refusing to hold itself accountable for the trauma this university inflicts on its students of color, Wake Forest has demonstrated its unwillingness to enact substantive change.”

During the forum, a white student stood on a walkway below the Benson University Center next to the plaza, holding a sign that said, “The Answer is Tradition.” The student declined to comment on his sign or give his name to a Journal reporter.

Of the university’s nearly 5,100 students, 70 percent are white and 30 percent are minorities, according to university statistics. About 8% of the students are black, about 12% are Asian, and 7.4% are Hispanic.

Before the coalition’s forum, Penny Rue, Wake Forest’s vice president for campus life, said she was excited that students would have the opportunity to speak out.

“Campus climate and issues of race and equity are of primary importance to me,” Rue said.

She added that she wished that some of the recent incidents, which many people on campus have called racist, hadn’t happened. Rue said she wasn’t surprised because those incidents are linked to the university’s history.

“For me, this is an appropriate moment for us to be really reckoning with that history and trying to think what it means for us moving forward,” Rue said.

At the forum, two WSSU students, Jasanna Quaye and De’Naija Sims-Wilsner, said they were offended by the Instagram post, but they were pleased that some Wake students spoke out against it.

In February, Wake Forest University acknowledged racist images of students in blackface that were published in past yearbooks. Days later, photographs of Wake Forest students posing in photographs with the Confederate flag were revealed. Two of those students are currently WFU administrators.

In January 2018, a video surfaced of a white female student using a racial slur to describe her residence assistant. That student withdrew from WFU.

In 2014, the predominately white Kappa Alpha fraternity on campus canceled a party off-campus with a theme about black culture. Before the party was cancelled, some white male students wore basketball jerseys, and some white female students wore short skirts with decorative tops to mimic performers in rap videos.

That same year, Imam Khalid Griggs, an associate chaplain at the university, found a bucket of urine in front of his office on campus in November 2014.

At the forum, several black students said they face racism from white students.

Jenny Mai, a divinity student, said that many black students withstand the university’s culture of racism and graduate. These students demonstrated the “strength of their ancestors,” Mai said.

Before the forum ended, Kate Pearson, a first-year undergraduate student, invited President Nathan Hatch and Dean Allman to come before the crowd and apologize. Neither Hatch nor Allman appeared in front of the crowd.

Pearson said that WFU is concerned about its public image rather than working for justice for its students.

Hatch attended the forum, but he didn’t address the crowd, said Katie Neal, a university spokeswoman.

After the forum, Rue said she was proud of the students who spoke about their experiences at Wake Forest.

“Wake Forest is committed to working with our students to make this campus an equitable environment,” Rue said.

'Punch her in the face.' Employees encouraged fight between assisted living residents in Winston-Salem, indictments allege.

Students attend a forum held by the Wake Forest University Anti-Racism Coalition to discuss the university’s response to allegations of white supremacy on Monday evening.

Breezy Jenkins (right) and Raven McCorkle, juniors at Wake Forest University, listen to a speaker during a forum held by the WFU Anti-Racism Coalition. 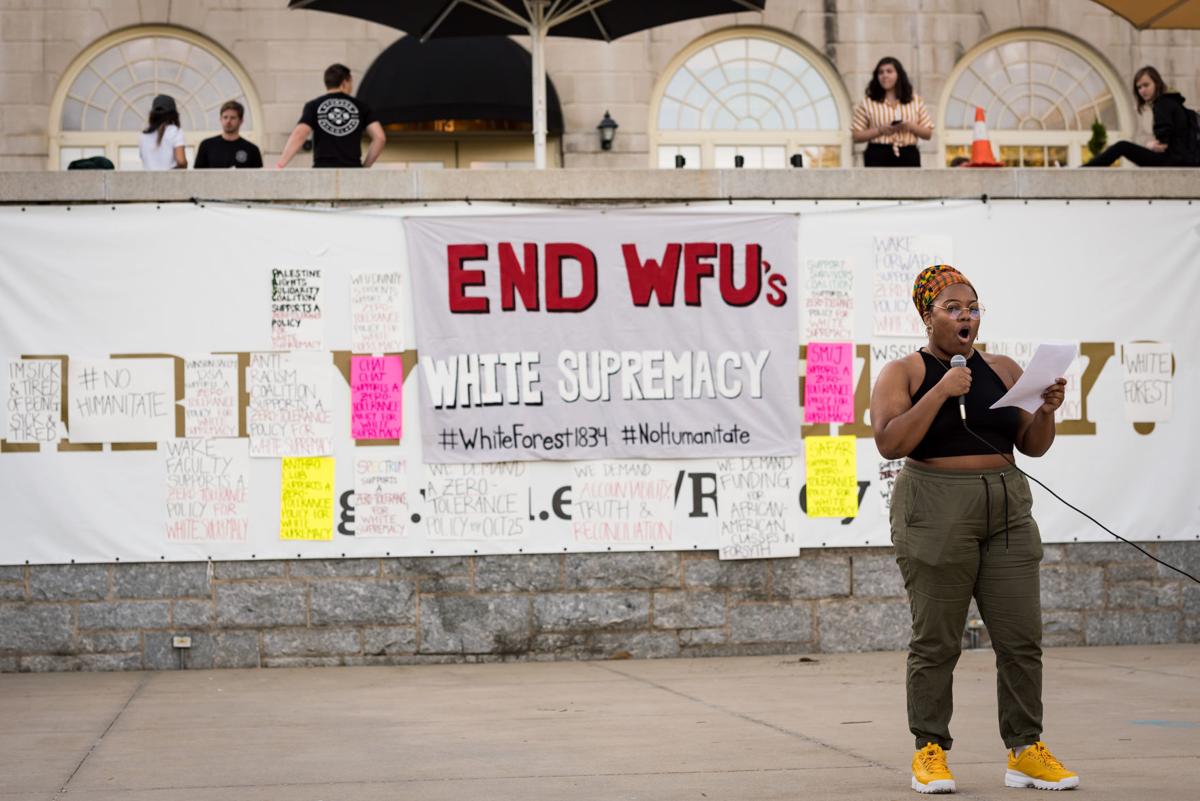